“Insane in the Germ Brain”

iZombie continues to build towards the upcoming Human/Zombie conflict when Angus’ message reaches a lot more people than initially intended.

This is one of those episodes where it’s difficult to answer the question of what it’s actually about. A lot goes on but the lack of focus on any one thing creates a disjointed experience that lacks a real sense of purpose. That’s part of the problem this season has in general; lots of different elements that don’t add up to a cohesive whole. Previous seasons handled different plot threads in a much more sophisticated way so it’s a pity that this season isn’t continuing that strong trend. Don’t get me wrong; I still love this show along with the characters, style of humour and so much else but I’m left wanting more with this season as a whole. 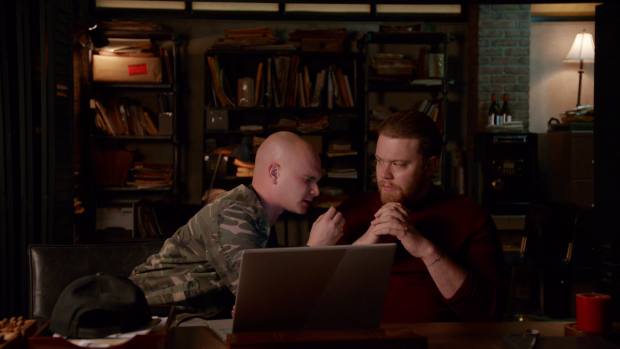 One of the things this episode covers is the brain shortage and an attempt to put a stop to it. Major and Chase trick Russ into getting Major a meeting with his boss only to use this as an ambush opportunity to deal with the problem. It’s clear from the beginning that Major is in control of the situation because the tone of these scenes is very comedic. It’s a nice touch to have Major shouting throughout and have that pay off with the reveal that he’s wearing earplugs so has to shout in order to hear himself. Having him be compelled to be brutally honest is great as well with Robert Buckley delivering a great performance as Major reveals every detail of his plan only to have his -mostly- competent squad come in to save the day. It’s a great example of how the comedy in this show can be used to great effect in furthering stories while giving particular characters time to shine. None of the problems surrounding Major’s characterisation are fixed by this but it is definitely entertaining.

The resulting celebration tells us that Fillmore Graves are back on top after stopping one of the smuggling operations. It may be a small victory but it reinforces the fact that Chase Graves is treating the approach to solving the problems of New Seattle as a War of attrition. The more ground that is regained the more people might be discouraged from further breaking the law. Morale is also an important consideration as the troops deserve to celebrate a win after so long feeling defeated.

Any celebration is short lived when Major’s squad returns with news of Russ’ escape along with a stolen weapon which pushes Chase over the edge and causes him to open fire on the soldiers which results in the death of one of them. His reaction does seem more than a little extreme given the circumstances and it isn’t entirely justified given what we know about Chase Graves at this point but it’s clear that the overall purpose is for Major to reconsider his allegiance to Fillmore Graves as an organisation. Major’s character arc has been bafflingly inconsistent this season but it now looks like the show is building towards a Major/Chase confrontation possibly fuelled by Liv being marked for execution. 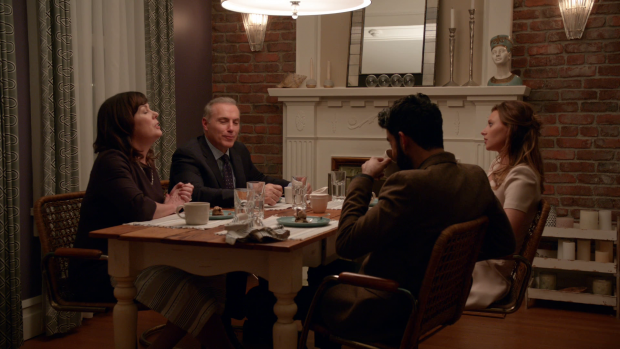 Another story told by this episode is Angus’ influence spreading beyond the walls of New Seattle thanks to the internet. Don E is on director brain and wants to create a masterpiece of preaching out of one of Angus’ sermons. Angus has been heavily promoting the “Humans are food” message lately so spreading this outside the confines of the city makes for a very dangerous situation for all concerned. He’s basically spreading anti-Human hate speech to a population of hungry Zombies while also layering it with a “only the strongest will survive” message that will only serve to escalate a bad situation. Reaching a small flock of loyal and devout followers is one thing but this sort of -potentially- global influence is truly terrifying and definitely well fixed to escalate massively by the end of the season. If Blaine’s real estate scheme coupled with his vague plan to infect the United States has any merit then we’re looking at a rapidly escalating situation that will quickly become Apocalyptic. With this sort of potential consequence it becomes easier to accept all that Chase Graves is doing to prevent such an outbreak.

The attempt on Angus’ life is problematically handled. Using slow motion and the orchestral soundtrack makes it come across as if the episode is aiming for a The Godfather sort of vibe while completely missing the mark. It’s a solid enough idea to want to remove Angus from that position so that his sermons are stopped before they can cause any more damage but a more understated approach would have been better rather than shooting for an epic and dramatic moment.

There are other smaller character moments that are handled fairly well. Ravi meeting Peyton’s parents was the scene I didn’t know I needed until I saw it. I loved how Ravi stood up for himself in front of Peyton’s father which impressed her greatly and having Peyton’s parents appeal to her staying in Washington when she goes there to be free of the quarantine situation is an expected well earned moment. The fact that Ravi agrees even though the cost is that he potentially never sees her again is an excellent showing of how much he cares about her. 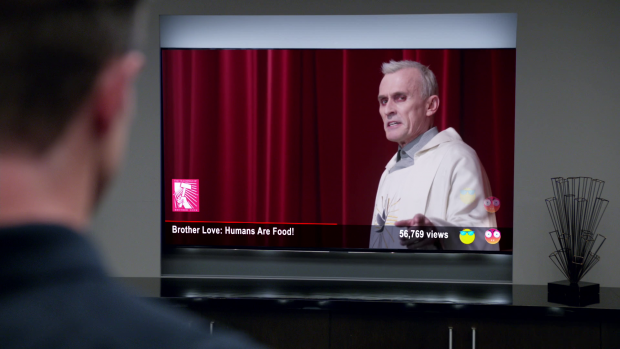 Less engaging is Clive and Dale breaking up. It does feel like this relationship should have ended long ago given how little consideration this season has given to the open relationship idea or their difficulties managing that. As breakups go it’s fairly sweet with Dale hearing Clive’s conversation from last week where he admits about how difficult it is for him to maintain this connection considering all he wants from his life. It’s enough for Dale to let him go and make out as if she has met someone else. It’s bittersweet and definitely for the best though Clive moves onto sleeping with Michelle a little too quickly. Very little of this has been handled particularly well but I’m not sure there’s an interesting story in Clive’s relationship with Michelle either.

The case of week is so forgettable that it might as well have been cut entirely. There is mild entertainment value to Liv being on the brain of a germophobe but it honestly feels like this plot was crowbarred in as an excuse to give the episode the title it has. It doesn’t really go anywhere on a narrative level and is dismissed as easily as it is introduced. One thing has been proven recently; iZombie has moved beyond needing to have a case and a brain induced personality shift in every episode. This is something the writers should take note of moving into season 5.

Isobel’s promised death happens in this episode and my feelings on it are conflicted. On one hand Izabela Vidovik has been a relentlessly charming addition to the cast who easily fits into the surrogate daughter role with Ravi and Liv serving as the parents in that scenario. Her comic timing is great, the character has some fun dialogue and her presence on the show feels natural enough. The problem with her character is that she only exists to die. It’s an inevitability that was established pretty much the same moment she was introduced so the question becomes around whether her presence is inherently exploitative or not. It’s my opinion that it is and it isn’t. Her arc has been vastly accelerated because she only recently appeared. It’s definitely well written and well acted with a clear purpose for the character in the form of researching a vaccine while building her up to be someone that the audience becomes invested in before she dies. There’s no doubt that this is effective but I keep wondering how effective it would have been had she been introduced at an earlier point in the season. 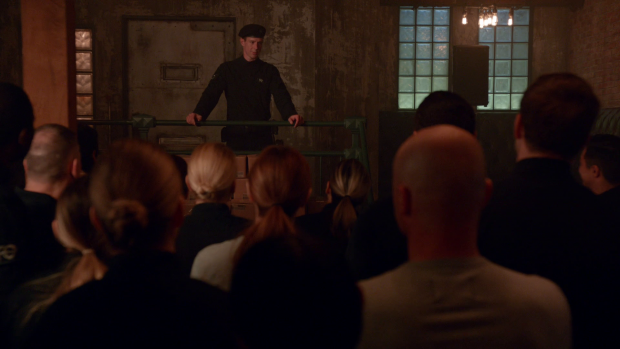 Even small victories are worth celebrating

Part of the problem with Isobel’s death in this episode is similar to the issues the show is having with the plotting in general; it doesn’t really add up to anything. Her death doesn’t bring any hope with it since the vaccine is still a fantasy nor is there any significance to it happening in this episode in particular. Not that it has to, promoting the “sometimes life just sucks” idea is fair enough as far as these things go but when so little else is progressing in any meaningful direction it falls on the most emotive subject to carry that burden.

One thing I would confidently say is that Isobel’s death is moving. The repeated teases throughout the episode with her playing possum for a cheap laugh are amusing enough even if they do happen too many times. The episode does address this and the growing frustration felt by Ravi and Liv makes it work on some level. It’s also a cheap attempt to put the audience in Ravi’s shoes when she actually does die and assume that it’s another fake out before letting the full range of loss hit. It’s nicely done because the actors sell it and the video Levon records where she says goodbye to Liv and Ravi is really touching. It also appears that Isobel will return in a sense when Liv fulfils her dying wish of Liv consuming her brain. It’ll be a very strange follow up but fitting for this show at the same time. 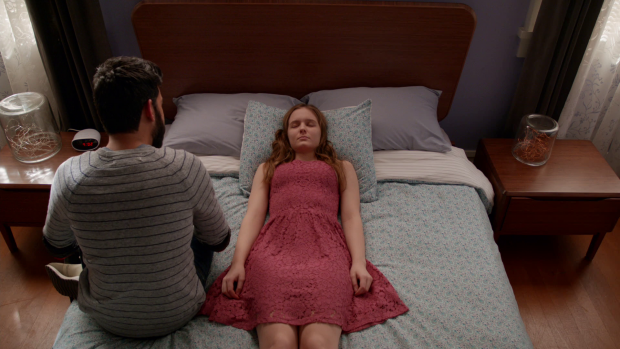 She’s really not kidding this time

A solid episode that entertains throughout but lacks focus along with an overall sense of purpose. Major and Chase tricking Russ into revealing his boss worked really well as a comedic sequence with amusing pay-off when revealing the reason that Major was shouting throughout. His unfiltered honesty provoked plenty of laughs as well though it doesn’t take long for this story to take on a dark turn when Chase violently reacts to Major’s squad making a mistake. It feels out of left field but it’s clearly intended to have Major’s loyalty tested. Angus’ message going out across the internet is interesting and horrifying in equal measure while adding some credibility to Chase’ position on controlling the Zombie population. The attempt on his life is problematically handled and would have been better served by a more understated style.

The episode handles some character beats fairly well such as Ravi meeting Peyton’s parents and the suggesting that when Peyton goes to Washington she should stay there where it’s safe. Less engaging is the Clive and Dale breakup even though it’s good that the relationship has ended since it wasn’t being handled very well to begin with. The case of the week is so pointless that it might as well not have been there proving that iZombie doesn’t always need to include this. Isobel’s death works really well because she’s a character that the audience and characters have become invested in. The problem with it is that the death currently has no wider significance and it serves as a reminder that this character only exists to die. It’s very moving because of how well written and acted it is but I’m still left wondering what the point of it was.