iZombie puts New Seattle on lockdown as Blaine comes up with a new nefarious plan and the idea of Zombie virus immunity is explored.

This marks the second episode in a short space of time where the traditional format is dispensed with. The first was better for it and this episode follows up on that nicely by helping to prove that iZombie isn’t merely a procedural with a gimmick; not that it ever was but it’s good to see that in action. 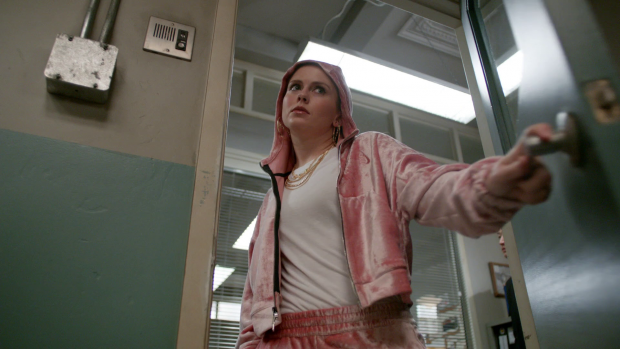 Liv in the house

First I’ll start with the Fillmore Graves impose lockdown. It’s a clear reference to similar events in our world such as Boston going into lockdown after the marathon bombings though with a darker spin on it as this isn’t so much about protecting people as it is about catching a killer. Fillmore Graves are past the point of moral ambiguity right now no matter how layered Chase Graves happens to be so it’s clear that any decision they make is in service of themselves rather than the greater good. In this case it is most likely to remind the residents that they aren’t in control of their own lives and possibly to test their resolve to see if there are any potential uprisings on the horizon.

The reaction to this lockdown is lukewarm at best with everyone apparently just accepting it and trying to make the best of the situation. In short it proves that the actions of this self imposed Government are easily accepted. It’s a very dangerous mindset for a population to be in as it implies that they are rapidly losing hope. It is mentioned through Liv’s end of episode rap that New Seattle is ready to explode so it’s likely that things will come to a head soon.

In terms of plotting the lockdown is a natural excuse for characters to be stuck in a single location to do very little. This setup can be gold for character development and that certainly works here. Most entertaining is Clive, Ravi, Vampire Steve and Sketch Artist Jimmy filling the time with a game of Dungeons and Dragons. Continually cutting to this doesn’t necessarily move plot forward but it’s a lot of fun and creates some really memorable character beats. A different side to Clive is seen as he fully commits to the game and Malcolm Goodwin’s performance sells this wonderfully. This game also leads to a passionate moment between Clive and Michelle that will most likely become important at a later date. Their chemistry has been evident of later so it’s probably about time for it to come to something. 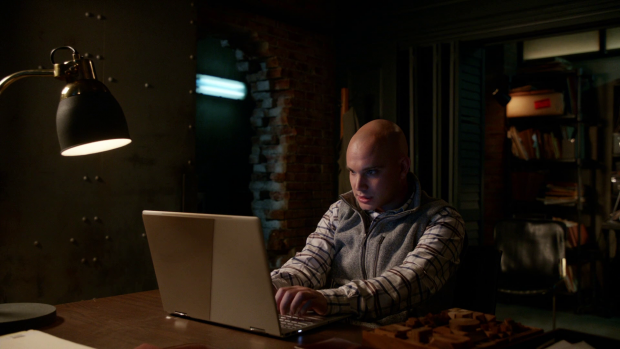 Peyton, Liv, Isobel and occasionally Ravi are stuck in the morgue which mostly allows the idea of Zombie Virus immunity to sink in. There’s a morbid twist to this as Isobel is very aware that she is going to die but chooses to spend her last days potentially helping as many people as possible. If Ravi studies her then he may learn what makes her immune which could prove instrumental in developing a vaccine. Liv is obsessed with ensuring that Isobel either gets back to her mother or that her mother gets to New Seattle. Isobel doesn’t want Liv to do that because getting out of the city is too dangerous and bringing her mother back in is equally dangerous so she would rather stay put and be of use that way. It’s a noble sentiment especially for one so young and it’s clear that her inevitable death will be both tragic and moving given how much effort is being put into her character.

Izabela Vidovic fits really naturally into the cast that she has already secured her place making the upcoming death of Isobel noteworthy on that alone. Isobel has already secured endearing dynamics with Liv, Ravi and Peyton so her continued presence on the show as her condition presumably deteriorates will only enhance those relationships. So far I like how protective Liv and Peyton are of her and the way she bounces off everyone. Her casual reveal of Liv’s status as the new Renegade to Ravi was really amusing as a situation coupled with a concerned reaction beautifully played by Rahul Kohli who knows fine well what happened to Mama Leone and doesn’t want to see Liv go that way.

Liv’s “White Rapper” brain was entertaining enough and thankfully not overblown because it would have gotten irritating had it persisted. I’m continually baffled by the approach to how brains affect Liv in this season because some weeks they are overwhelming and alter her personality for the entire episode -like last week– and others she is able to go back to something resembling normal as in this episode. I would like to see exploration of how much choice Liv has over how her personality is altered and whether certain personalities are more powerful than others. It could be a great case study to play out over an episode or two to fully establish the rules especially now that others are being affected by them and people are being less tolerant. 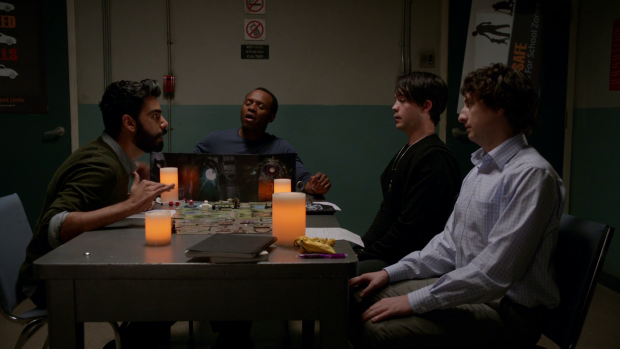 Enjoying some down time with some escapist fantasy

The highlight of the episode for me was Don E being exposed to the brain of a computer expert. Bryce Hodgson undergoes a complete transformation completely losing all of Don E’s manic charisma in favour of something more subdued and meek. It’s a great performance and serves this part of the story well. Blaine uses this opportunity to sell off the Zombie cure to the highest bidder to fund his Real Estate scheme. Don E being under the influence of a less confident brain makes him a willing participant rather than someone with his own free will which makes Blaine seem more intimidating since the audience perspective is seen through Don E who finds Blaine terrifying and is constantly paranoid that the “well known Zombie” that is to be killed as an example will be him.

Blaine’s Real Estate plan is interesting in a Lex Luthor sort of way as it involves buying property cheap, engineering a situation where it becomes valuable then selling it on at vastly inflated prices. Once again it’s a bit of a real world reference as in times of economic troubles property is the only thing worth owning as a return can be made on it if the owner waits long enough but it’s also a great supervillain plot. Blaine makes reference to infecting the entire United States with the Zombie Virus which seems like a terrible idea considering how untenable the New Seattle situation is but as with most of Blaine’s schemes there will be a lot more to it than we originally think and I look forward to seeing what that is.

His murder of the Mayor after curing him is really unexpected but nicely done as it shows how fearless Blaine is because he feels truly invincible. In his mind there’s no way his scheme can fail and it does appear that Peyton is part of that plan as he makes specific reference to her relationship with Ravi only he thinks that Ravi is a Zombie meaning he doesn’t know the full extent of Ravi’s situation. Peyton as Acting Mayor is also an interesting development considering her fair minded approach to both Humans and Zombies, Blaine’s interest in her and Mr. Boss closing in on the money of his that she spent. 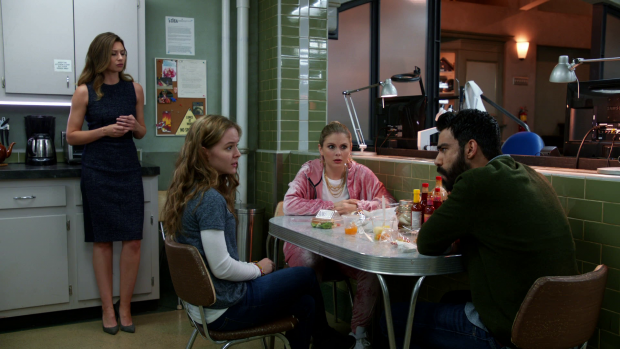 The show is still struggling with Major who seems to change on a weekly basis. His argument with Liv seems to come from nowhere as there hasn’t been much attention given to the buried animosity that exists between them in a while. Granted Major himself doesn’t seem to be aware of what wrong he’s done at this stage but there’s also a profound disconnect between Major’s actions and his accountability for them.

This episode does show him hesitating when ordered to scratch Cain (James Jordan) because it’s clear that he will be condemning a man to a grizzly death when he does so. There isn’t much personality to Cain other than hating Zombies which counts as enough for the purposes of this. His status as a serial killer of Zombies is enough for Chase Graves to want to make an example of him. On the surface it looks like Major doesn’t have a choice because either he scratches Cain or Chase does and the latter would likely result in a severe dressing down of some kind if not worse. It could be argued that Major is in a difficult position and is forced to follow orders to make the best of a bad situation but his loyalties are presently unclear which will make it difficult when Liv’s Renegade identity starts to become known. Since there hasn’t been enough work done with Major and his stance on the situation it will be difficult to accept anything that is done with him. 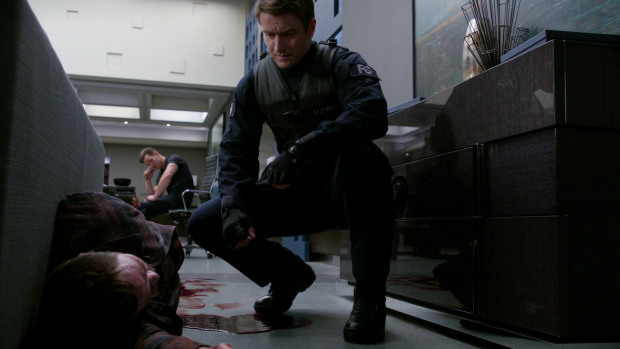 What is Major up to?

A strong episode that breaks with the established format once again to deliver some engaging characterisation. Clive, Ravi, Vampire Steve and Sketch Artist Jimmy’s game of Dungeons and Dragons was really entertaining with a great performance from Malcolm Goodwin. The progression of Clive and Michelle’s chemistry is a welcome addition that makes this seemingly pointless diversion feel worthwhile. Isobel is settling in nicely with a well established dynamic with the other characters and a clear arc towards a tragic death in the coming episodes. Establishing her as an important character early on will make her inevitable loss feel more impactful. Liv’s “White Rapper” brain is amusing and thankfully not overused though adds more confusion to the ongoing debate around how the brains actually influence her.

Don E’s computer expert brain is the highlight of the episode. Bryce Hodgson completely transforms himself in his performance and delivers a different perspective on Blaine who looks more intimidating from the point of view of Don E. Blaine’s Real Estate scheme is really interesting so far as is the mystery that surrounds it with many of the details still to be revealed such as Peyton’s part in it and how he plans to infect the rest of the United States. Major is still lacking in definition so far and his motivations are even harder to understand as the episodes progress. His loyalties are unclear though he does seem to support the authoritarian regime that Fillmore Graves has definitely become.