iZombie deals with the aftermath of Major taking the cure as Liv takes on a scatterbrained personality.

I have to say I was really surprised by how this episode dealt with Major finally taking the cure last week. I’m unsure what I was expecting from it but what we actually got surprising. It’s really impressive how this show continually keeps me on my toes in the way it handles the plotting. 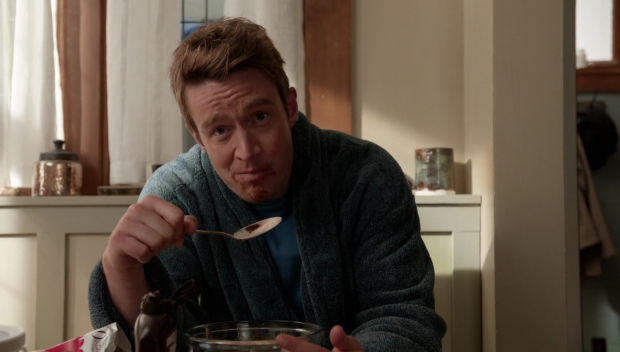 Major enjoys being human again a little too much

Much of the episode was devoted to waiting for Major’s memory to disappear. It has never been treated as anything other than an inevitability and I was definitely convinced. Using a lot of the early scenes to constantly check in with Major to confirm that he still remembered who he was a nice touch as it kept the idea that he would lose his memory a certainty in the eyes of the characters and by extension the audience.

The seeming inevitability also allowed for some great character moments. One thing I love about iZombie is that it rarely descends into angsty melodrama and this was a good example of dodging that particular CW bullet. Nobody wanted to lose the Major they know and love but it was handled with a light touch. A good example is the letters he was writing to those closest to him. It would be so easy for these to become the source of so much angst but it is treated with a light touch. We already know who the important people in Major’s life are so labouring that point by focusing on the letters isn’t all that necessary but there are ways they are used to give meaningful insight into what Major is feeling.

Humour is the obvious one. It’s a natural mechanism people use to hide how distraught they really are and that’s definitely what’s going on here. The back and forth between Major and Liv about “Good Old Major” was both hilarious and touching as it allowed the characters to talk about how they were feeling without being overly sentimental about it. There is a bit of sentimentality when Major tells Liv point blank how he feels about her but considering the episode wasn’t overloaded with it I consider it to be earned.

One simple detail to the letters tells us a lot about Major’s friendship with Ravi. His letter to Ravi is tear stained which is funny because it’s completely the opposite of what people would traditionally consider Macho but also really touching because it lets us know exactly how much Major values that friendship. There’s another reminder earlier in the episode when they are playing video games and talking about girls. It’s a mundane moment but a great opportunity to let characters bounce off one another. 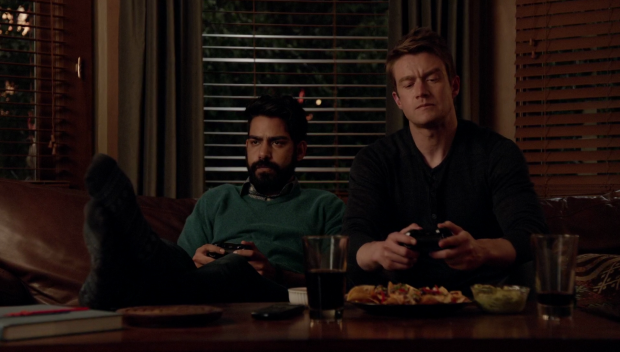 With his memory close to disappearing, Major is encouraged to try and right some wrongs. This involves a trip to visit his mother who he has become estranged from. This doesn’t quite land as I can’t remember it ever being mentioned before. I suppose the lack of mention before now says a lot about how close they are but beyond that there’s no real dramatic weight to it because we don’t really get a sense of this lost relationship.

Despite that, Robert Buckley’s performance is good enough to make the whole thing not feel pointless. The idea of him making an impulsive decision to side with his father when his mother came out as gay is an interesting regret to have because it shows the naivety of youth and how regrets can linger for a long time and how difficult it can be to make amends after a lot of time has passed. As I said, it would have meant more had it come up before but at least the performances were right.

This episode was full of surprises when it comes to memory. I’ve been back and forth on whether I believe Blaine’s memory loss or not because the arguments for both have been so masterfully executed so the reveal that he has had his memories pretty much the whole time was a genuine shock. It throws all assumptions made about Blaine rehabilitation out of the window. It’s completely unclear if he actually wants to be a good person and is further inspired by the context of remembering how terrible a person he was or if there’s some kind of incredibly long con at work.

The scene where he reveals the truth to Peyton is another example of how nuanced an actor David Anders is. He seems completely genuine when he tells Peyton that the person she has grown so close to is the real him and he pretended to have forgotten everything to increase the chances of people giving him a chance to prove that he can be a good person. It seems perfectly reasonable from a twisted point of view but it’s also completely disgusting how he has essentially manipulated Peyton into developing feelings for a potentially false version of him and persistently lying to everyone around him. 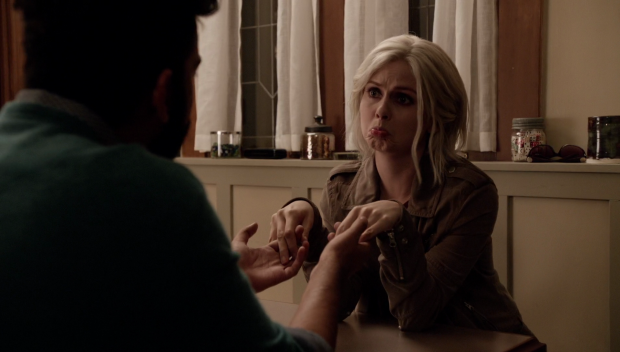 Another great thing about this scene was how Peyton was able to use her intelligence to manipulate Blaine into revealing the truth. Blaine tested the water by asking how she’d react if he did have his memories back and only came clean when he thought she would be ok with it. It’s great to see Peyton’s intelligence come into play and I’d love to see her given a more weighty storyline to call her own. The Blaine/Peyton relationship has felt more plot driven than character driven which lessens the impact of this reveal in terms of how it affects them though still counts as effective in terms of how the plot is moving forward.

Once the reveal happens the episode develops an infectious level of excitement once the prospect of Liv being cured is pretty much a certainty. It feels like a while since Liv’s desire to be human has come up and it’s definitely a good idea to revisit this periodically as it is a long running threat that continues to give Liv hope. This is the closest she has ever been to actually achieving it and the proof that the cure works feels like a significant victory. The episode spends enough time drinking in the possibilities that it is ideally placed for a brutal reality check.

Liv can’t become human because if she does then there’s no show but living out her days as a zombie doesn’t seem practical especially since one of Ravi’s ongoing plots is working on a cure. He either fails and concludes it isn’t possible and succeeds or the show comes to an end.

Since Ravi has already succeeded an obstacle is put in the way of dealing with the end of the show by having the cure stolen from the Morgue. It’s predictable but necessary to keep things moving along and there’s no shortage of suspects. Don E was desperate to get a hold of a dose so that he could make a lot of money, Blaine knows where it is stored while also having a good enough reason to take it out of their hands since it would hurt his business and Vivian could have arranged for Filmore Graves to steal it so there’s a few episodes worth of investigative material here. 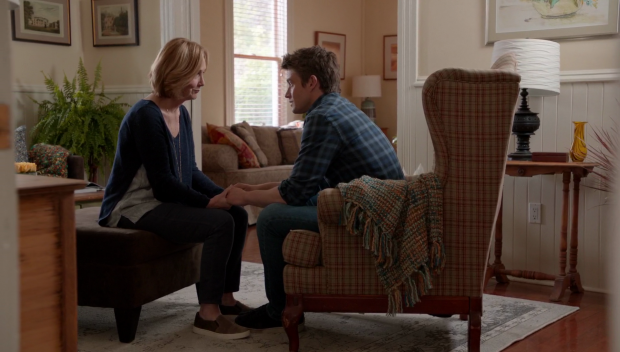 Major makes amends with his mother

The case of the week was fairly dull but did give us an entertaining “hot mess” brain for Rose McIver to sink her acting teeth into. It was a funny personality to begin with but became tiresome after a while which I suspect was exactly the point. Her scatterbrained personality and inability to be reliable for anything tested the patience of Clive and Ravi so Liv was never supposed to be likeable while under the influence of this particular brain.

Unfortunately there was very little else to this though the case seemed to be solved through mostly police work which is somewhat rare though made perfect sense given how useless Liv was. The sentiment around this being her last case when she thought she was about to be cured was nicely played though this is definitely not good enough to be the last case that Liv ever works on with Clive.

Another excellent episode that manages to surprise in the way it handles the inevitability of the memory loss plot. Spending a good chunk of the episode checking in with Major to confirm he still had his memories worked well while also allowing for some meaningful character moments. For the most part it is handled with a light touch while still exploring how important his relationships are to him. The tear stained letter to Ravi is equal parts hilarious and touching. Major’s visit to his mother and her girlfriend/wife somewhat comes out of nowhere so doesn’t have the impact it should. The actors play it well but it’s the first we’ve heard of this estranged relationship so it doesn’t quite work.

The reveal that Blaine has been lying about having his memories was handled well and it further shows just how excellent an actor David Anders is. He has successfully managed to keep it ambiguous up until this point and it’s still unclear whether he’s being honest about trying to be a better person or if it’s another fiction. Peyton being able to fool him into revealing the truth was a good moment for her as well and I just wish she was given a meatier story to deal with rather than this rushed relationship with Blaine. I loved how the episode deals with the news that the cure works by creating an infectious level of excitement around the prospect of Liv becoming human again. Obviously it can’t happen because there would be no more show so there’s a brutal reality check when the cure is stolen and there’s a fairly long list of suspects. The case of the week was hit and miss. Liv’s “hot mess” brain was amusing at first but tiresome eventually. I like that she wasn’t supposed to be likeable and how irritating her scatterbrained approach to everything was for Clive and Ravi but the whole thing wasn’t all that interesting. 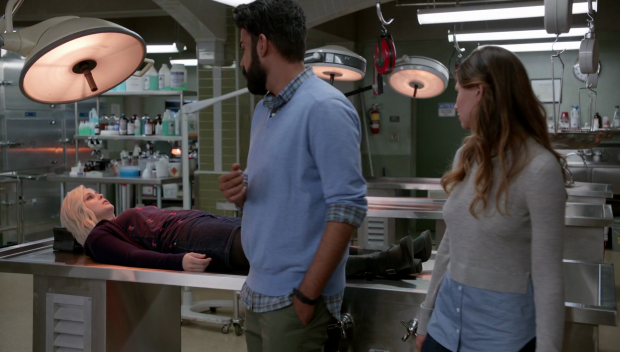