iZombie lampoons Dungeous and Dragons when Liv ingests the brain of a murdered Dungeon Master as things grow more intense with the upcoming Zombie/Human conflict.

Even though the procedural elements of the show are the weakest when stacked up against everything else there are still plenty of opportunities to deliver something slightly different to the formula. The significant difference here is that Sketch artist Jimmy (Ryan Beil) and IT Guy Vampire Steve (Kett Turton) are connected to the case. Most of these plots suffer because too much time is spent introducing characters who have to be memorable enough to carry this story while being ultimately disposable. This way the show is able to develop characters we already know and it enriches the case in different ways. 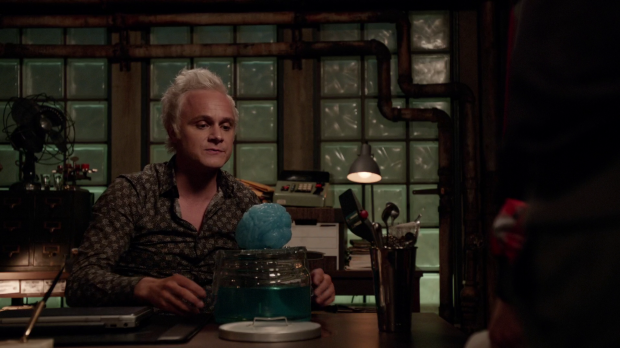 Little things about their lives come out of the questioning. Steve’s sketch of Dominatrix Liv is telling on how his mind works and the small detail of Vampire Steve cultivating his persona to impress a girl who is into Twilight. They’re small details but more than enough for recurring characters and makes their return in future episodes feel like more of an event. I dare say they will pop in and out in the remaining episodes and I’m all for that as long as they continue to develop. This is very smart and subtle world building and marks yet another thing I can applaud this show for.

Another notable difference was that Liv and Clive don’t actually solve the murder. The case hits a brick wall when the victim’s secret room full of hi tech computer equipment spying on Russian Nuclear Power Plants is discovered. It’s an intriguing development and might link into something bigger going on. Then again it might just be an excuse to get the FBI involved which allows Dale to return without the situation seeming too contrived.

The scene between Dale and Clive was nicely handled. There was never any closure on their relationship due to her rapid disappearance so if this is how the show delivers closure then it could do a lot worse. It’s rare to see Clive so emotionally open as he often keeps his feelings really close to his chest. His blunt honesty to Dale about how he feels and what he wants from her shows how much he cares about her because he wouldn’t put all his cards on the table otherwise. Dale can’t get past the fact that he lied to her and covered for Major so it seems to be irreconcilable for the moment. Whether we’ll see her come back or not is anyone’s guess but the emotional beat was excellent.

Liv’s Dungeon Master brain brought a lot of hilarity to the table. Her ornate narration for everyday situations was great and having the main characters all sit down to play a game to try and trigger her visions was an obvious yet satisfying choice. I know next to nothing about Dungeons and Dragons so don’t know if everyone chose characters to suit their personality or not but it doesn’t actually matter since the end result was so hilarious. Clive getting to the point where he was really invested in the game and wanting to make it a regular thing was great and Liv’s delivery of the descriptions and accompanying voices made for yet another impressive acting turn from Rose McIver. 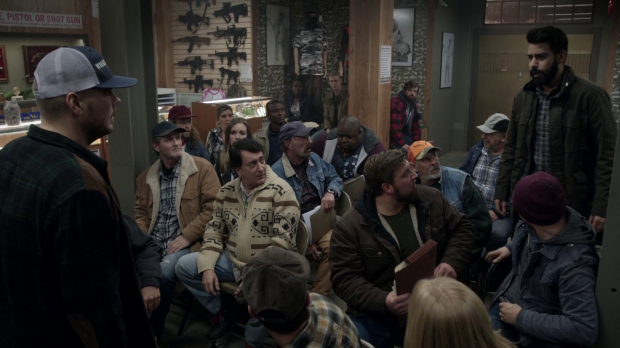 Ravi is forced to blow his cover

This episode was no slouch on developing the background plots either. Ravi attending the Zombie Truther meeting was interesting as the Truthers have pretty much the whole truth which makes the struggle more a matter of perspective. They see Zombies as something other than human that needs to be eradicated whereas we have the perspective of the main characters who understand that Zombies are still people on a fundamental level. There are good Zombies, bad Zombies and everything in-between.

What makes this more complex is that it’s easy to understand where the Truthers are coming from as well. Based on what they say they have only seen the feral side and assume that every Zombie will end up that way. That potential does exist but we’ve seen that there are ways to control that and the Truthers aren’t really aware of the internal struggle faced by every Zombie hidden among Humans.

In some ways the Truthers strike a very particular nerve that links into the modern world in a big way. Due to recent events there is a growing sense of paranoia and xenophobia breaking in thanks to very loud minorities. I’m not going to get overly political or turn this into an opinion piece on the state of the world but it’s relevant to connect the dots here. I wouldn’t be surprised if the writers were trying to throw in some social commentary here and it’s working really well. A certain viewpoint on the Zombie Truthers could show them as being people who are motivated by fear and a lack of understanding. Obviously they are the villains in the sense that they oppose our heroes but ignorance is the biggest motivation here rather than outright malice. This makes the conflict more compelling and feel more real as a result.

Ravi’s infiltration is very informative as he learns just how much they actually know and sees the evidence they have while also finding out that their plans are already escalating to kidnapping. he partially blows his cover by introducing himself and fudging some facts about how he found out the truth about Zombies. He also theoretically manages to buy some time by telling them that he’s developing a vaccine which definitely isn’t true but it’s convincing enough at least until Don E is captured and caged. 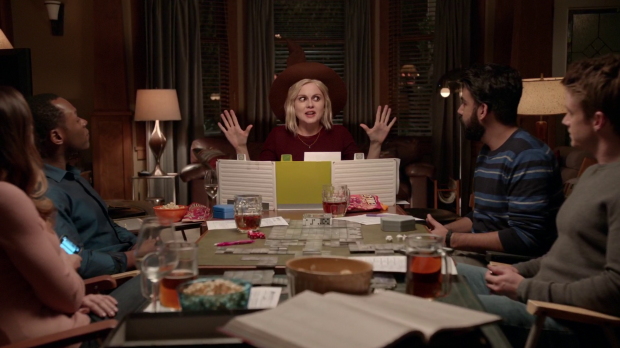 I like how Don E’s capture is tied into Blaine’s new role when he decides to test Ravi’s blue solution to see how long the visions last and how increased the intensity is. Presumably he thinks there is money to be made so Don E entertainingly live out the life of a World War II veteran to the horror of onlookers. The idea of being stuck in someone else’s memories for two days straight doesn’t seem appealing and the fact that it turns him feral afterwards is somewhat concerning as well. Blaine has yet to learn the results of this as he has taken some personal time to torture his father by throwing scraps of brain into the well that serves as his prison as if he’s feeding the ducks. It’s humiliating if you happen to be Angus but very Blaine. The return of Mr. Boss will likely upset Blaine’s recent position as the top of the Seattle crime food chain. I just love how this show keeps everything connected in such organic ways while also making the stories feel distinct.

Also connected to the Truther plot is D.A. Barracus’ (Kurt Evans) run for Mayor. He is shot by an unseen attacker and risks going Full on Zombie in the middle of a crowded event. Thankfully Liv is there to encourage him to use Jedi meditation techniques to prevent himself from turning so that’s a bullet dodged in a figurative sense if not a literal sense.

A Zombie Mayoral candidate makes a lot of sense for the world of this show as it opens up different storytelling avenues. Blaine comments that a Zombie Mayor would be good for him as presumably he has leverage so that his business can be further legitimised. It could also make life a lot easier for Liv who operates under the radar as a Zombie but it is also clear that Barracus isn’t actually a very good candidate. He has a hidden scandal in the form of extra marital visits to a murdered Dominatrix which means he’s inclined to cover up the truth of the investigation whatever that turns out to be. I’m not sure if the answers will be tied to Barracus or not but it’s curious that it’s still a plot point. The fact that it’s slowly starting to link into the Barracus story suggests that there’s a reason for this.

These scenes also allow Liv to meet Chase Graves (Jason Dohring) who already seems fairly complex. His calm and measured way of speaking suggests there are layers to him that we will see develop the more he appears. Having Jason Dohring on the cast even for a little while is definitely a win in my book. 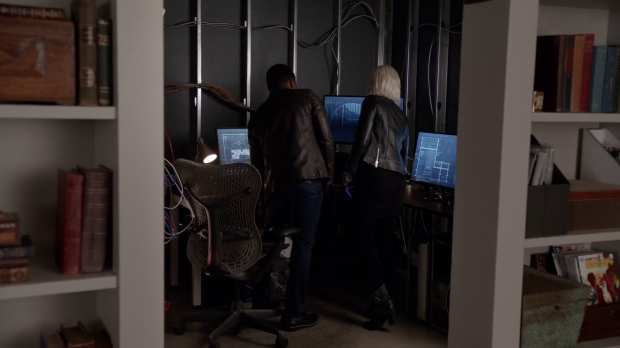 The opportunity is also taken to develop Liv’s relationship with Justin. Seeing them interact is a lot of fun and they have such good chemistry together especially when Liv is allowed to act like herself. It’s good to see a relationship develop on a CW show free from obscene levels of angst though it still strikes me as odd that Major seems to have no problem with them as a couple considering recent events.

Major is still a character that the show doesn’t seem to know what to do with now that he’s human again. Spending some of the episode reading his Chaos Killer hate mail is really amusing but having this lead to him meeting Shawna (Sarah Jurgens) who appears to sympathise with him feels somewhat clumsy. I doubt this will end well for Major though it’s his own fault for inviting a stranger around to his house when he’s alone. Hopefully his stupidity will be appropriately punished.

An excellent episode that changes up the formula on the case of the week by having recurring characters be part of the investigation and an unusual lack of proper resolution. This allows Dale to return in a way that doesn’t feel too contrived and lets us see a more emotionally raw version of Clive. Liv’s Dungeon Master brain is a lot of fun to watch and the main characters sitting down to play a game of Dungeons and Dragons is immensely entertaining especially when Clive becomes invested in it.

Ravi attending the Zombie Truther meeting tells us a lot about them. They know the truth and understand the facts which makes the conflict more about perspective as they don’t see Zombies as people. Their plans have escalated to kidnapping until Ravi steps in and theoretically buys some time. I like how complex the Truthers are and how their motivations can be understood if not agreed with. Tying this into Blaine testing out Ravi’s blue solution which leads to Don E going feral and being captured was a smart move as well. The truther plot also connects to D.A. Barracus’ running for Mayor when he gets shot and almost reveals himself to everyone but is stopped by Liv. Major is still a character that the writers don’t seem to know what to do with. Having him read his Chaos Killer hate mail is entertaining but leading to him inviting a sympathetic girl over to his house when he’s alone is really clumsily handled but Major might be punished for his stupidity. 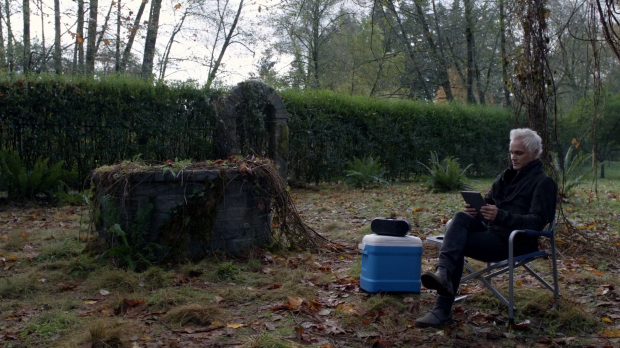 Blaine has some quality father/son time