iZombie juggles a few different stories as Liv takes on the personality of a gossip while Peyton babysits Blaine to see if his memories come back.

I mentioned last week that I was frustrated by the love triangle that has been introduced this season between Peyton, Ravi and Blaine and this week does little to redeem that particular plot in my eyes. There are things about it that work well such as portraying Ravi as being pretty pathetic. Rather than trying to create sympathy for the way he is feeling the show plays it for laughs and acknowledges that he has hasn’t exactly made good decisions lately. 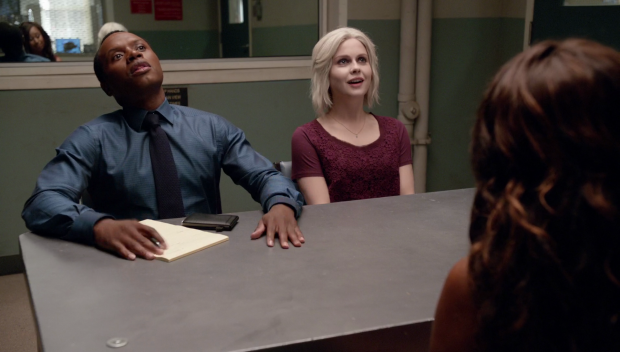 Liv’s reaction to this is well done also. She is in a difficult position because Ravi and Peyton are both her friends so she can’t be seen to be “taking sides”. Thankfully the characters in this show are adults and act like it so Liv doesn’t side with either party. She sticks up for her best friend by pointing out the stupid decisions that Ravi has made while not giving him as hard a time as she could. She is still being friends with both of them but also telling the truth as she sees it. It’s a refreshingly adult interaction that shows a maturity in the writing that doesn’t necessarily exist on other shows.

As good as all of this is I don’t really buy into putting Blaine and Peyton together. It makes a lot of sense for this version of Blaine to be terrified of becoming the man he was before and this is a strong way of exploring what makes someone a bad person. In Blaine’s case it seems that nurture is the winning factor in terms of the man he was though nature seems to inform the man he currently is. With his memories he is nothing short of a sadist but without them his first instinct is to do the decent thing. This can be clearly seen when he turns down a night of passion with Peyton because he feels that it would be more respectful for them to wait until they know what kind of man he will be in the morning.

Of course it’s entirely possible that Blaine is playing the long con at expert level and this is all part of his plan but I’d like to think that this is his road to redemption and the writers will work to find him a new role in the fabric of the show. Time will tell on this one but for now it seems that Blaine is embracing the opportunity for the second chance being unburdened by the memories of the horrible things he does gives him.

From Peyton’s point of view I don’t really understand why she would be attracted to him. She knows the sort of man he was before the memory loss and knows what sort of man he could be again. She has always been an upright and principled person so the fact that she is won over by this new Blaine so easily doesn’t really work for me. I can see the argument for her not seeing the man he was and deciding to give into her attraction to give him a second chance. 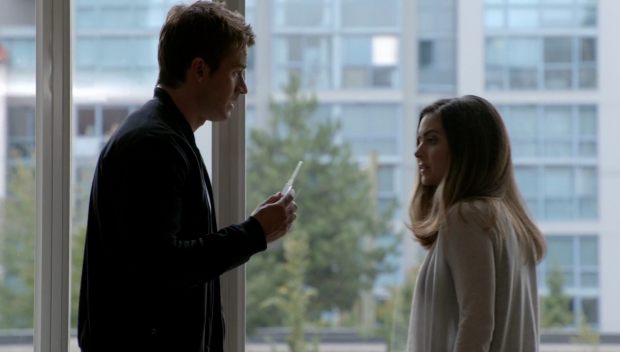 It may not sit right with me but it’s not necessarily a bad thing. This will have to be played carefully as it’ll be easy for this plot to spiral in an uncomfortable direction. The trick will be to have other characters not approve of Peyton’s decision to pursue a relationship with Blaine. Ravi won’t approve for sure but that’s because he hates Blaine while also being jealous of him so his opinion is somewhat unreliable but Liv and Major’s reaction should be disapproval. Having Peyton attempt to justify herself while feeling unsure of her decisions at the same time could make for wonderfully complex storytelling but we shall see how this develops.

Major’s role this season is very difficult to define. At first it looked like he would be in the middle of Liv’s inevitable conflict with Filmore Graves then it appeared as if his fast approaching death would be significant but this episode focuses on the Natalie plot. It looks as if it has been almost resolved now that Major has given her the cure and allowed her the opportunity for a fresh start as a human free of any painful memories but this plot could equally return with a memory wiped Natalie.

One thing the show isn’t spending a lot of time playing around with is the prospect of Major losing everything that defines him. It’s mentioned that the memory restoration not working on Blaine is regrettable because it means that curing Major will definitely result in losing Major as he is now. It’s a potentially tragic story that should be getting more attention than it is though an arc for Major really needs to be settled on rather than the haphazard approach that is being taken currently.

I’m going to sound like a broken record again and point out that the case of the week was fairly uninteresting again. Liv on gossip girl brain was entertaining enough as are all of Rose McIver’s transformative performances but the case itself was dull. I consistently find myself losing interest in them before the murder is even solved and then forgetting about the details after the episode is over. I did like the mystery solving flashbacks narrated by Clive as they gave the episode some visual flair and the joint realisation of the root of the personality shift by Liv and Clive was a perfect comic moment. 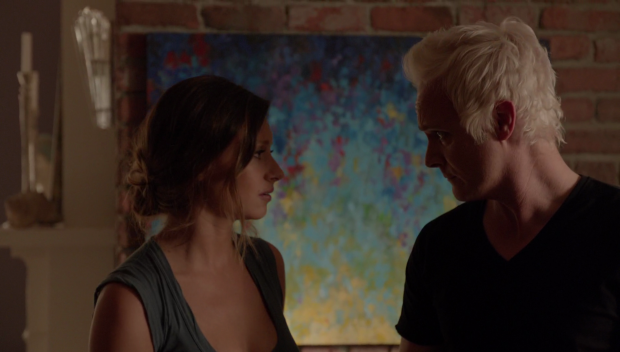 Her altered personality also allowed Ravi’s situation to seem all the more pathetic. The way she couldn’t stop herself telling Ravi about what she had observed of Peyton and Blaine was absolutely hilarious and Rahul Kohli absolutely nailed the reactions. It just goes to show that there is always entertainment to be mined from the brains Liv consumes.

The upcoming Human/Zombie War is developed here as well. Liv tracks down the brother of a Max Rager security guard who firmly believes that Zombies are real and is looking forward to discovering one so he can put a bullet between its eyes. It’s unclear if that man will be a big part of the overall story but if he only represents an anti-Zombie sentiment then that’s definitely enough for now. Him saying “you can’t murder what ain’t alive” is a really chilling statement and tells us everything we need to know about the attitudes that Liv will be dealing with.

A solid episode that delivers compelling character drama while addressing some complex questions. The Ravi/Peyton/Blaine love triangle isn’t something I’m interested in but Ravi being punished for his bad decisions while playing the situation for laughs does work fairly well. Liv finding a way to be a friend to both Peyton and Ravi without taking sides makes for a really mature touch that other shows wouldn’t necessarily manage. Blaine not wanting to regain his memories and return to the person he was is really interesting as it provides both sides of the “nature vs nurture” debate at once. The way Blaine is with his memories intact is definitely provoked by “nurture” but without those his “nature” is to be a decent man. Of course he might be playing an expert level long con but until that is revealed the idea of someone wanting to embrace the opportunity to change and being scared of who he used to be is compelling.

Peyton’s perspective is something that the show will have to be very careful of. It’s clear that she’s wrestling with her feelings and to me it doesn’t work that someone as principled as Peyton would come around to the idea so easily but if her friends disapprove of her decisions then it allows this complex issue to be explored in a really fascinating way. Major’s role this season has yet to be defined and at the moment it’s all over the place. His quest to free Natalie takes focus this week but he also has his association with Filmore Graves and his fast approaching death are still in there with none of them receiving as much attention as they need. I really want to see how he feels about losing his memories explored to its full potential. This was another week where the case was underwhelming. Gossip girl Liv was entertaining enough but beyond that the mechanics of that story were uninteresting outside of a couple of standout moments. The development of the upcoming Human/Zombie War is slight but significant as it establishes the anti-Zombie sentiment that Liv will be dealing with. 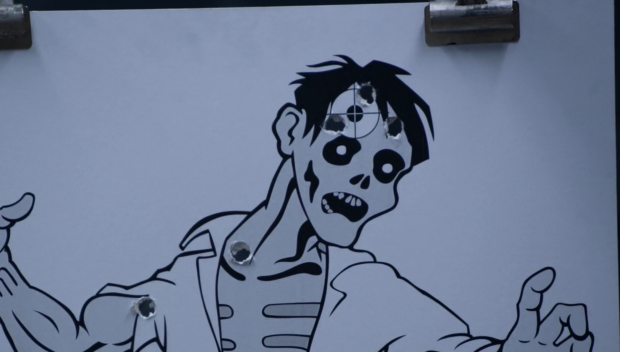 Anti-Zombie sentiment is at an all time high