iZombie further explores Isobel’s contribution to the show as Chase redoubles his efforts to find out the identity of the new Renegade.

Isobel has been an interesting addition to the cast so far. There’s a tragic end built into her character that it’s always important to be mindful of but the show has been doing a good job of reminding the audience that there is a person behind that tragedy who deserves to have their voice heard. Last week she made a clear decision to give what is left of her life to the pursuit of a cure for the Zombie Virus. Her unique immunity could be the key to developing a vaccine and she’s willing to devote the rest of her short life to the pursuit of that goal in any way she can. 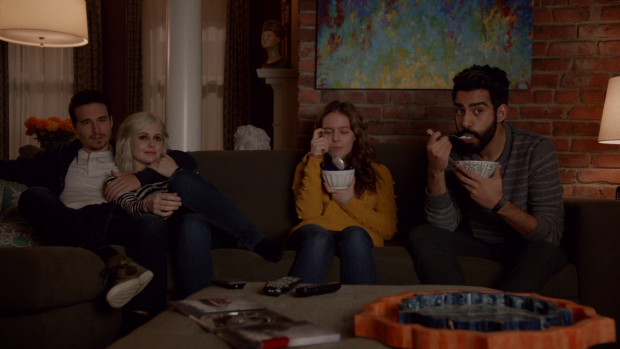 Binge watching is the best way to pass the time

It’s not an ideal situation because everyone knows where this ends up but they keep a good sense of humour about it. The dialogue does bring up her upcoming death far too often to be comfortable but a lot of time is spent with Isobel as a character and that part is handled really well. Ravi and Liv take on the role of pseudo adopted parents tasked with keeping her spirits up as Ravi runs tests on her. This amounts to spending time with her and binge watching the in universe show Zombie High that was introduced in the season 2 episode “Method Head“. It’s basically a fake TV series created to allow the show we’re watching to poke fun at itself by implying exaggerated tropes in an attempt at meta commentary.

From what I can tell Zombie High is more of a traditional CW show than iZombie is with the mention of relationship drama, over the top plot twists and attractive men going shirtless for no reason. For the purposes of this episode referencing the fake show is used to set up two jokes; the first is a shirtless Blaine following the attractive shirtless men comment and the second is highlighting a lack of budget necessitating chunks of the plot happening off camera. The latter is mainly played for laughs with Clive describing a couple of exciting action sequences that we as the audience don’t see. It’s not the greatest but it does amuse to some degree.

Clive describing the events leads on from Liv consuming the brain of Lou Benedetto and getting herself suspended because she inherits a few too many of his more questionable traits. There was potential here and Rose McIver does a really good Enrico Colantoni impression but the narrative doesn’t support this characterisation in any meaningful way. It very quickly devolves into background noise as the murder investigation becomes less and less important. Basically once Liv is removed from it solving the murder very much becomes an afterthought. 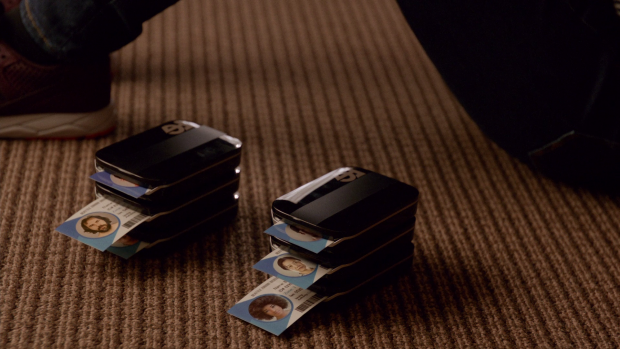 Liv’s operation is growing too quickly

Another use for the fake TV series is to help show the passage of time with the different season numbers serving as a marker for movement through the montage. It’s effective enough because even a binge watch takes a while so it’s clear that this episode takes place over a relatively extended period of time. It’s also a quick way for Liv and Ravi to gain familiarity with Isobel that makes their relationship feel a lot more lived in than it otherwise would for a character so recently introduced.

As I’ve said Isobel is largely defined by her illness creating a time limit but she’s a lot more than that thanks to a really charming performance by Izabela Vidovic who feels like a natural fit for this show. She has sass, lots of personality and a reasonable measure of depth making her presence feel worthwhile. My expectation is that her death will be timed for the season finale and the work being done means that it will most definitely be impactful.

The montage also worked to show the growth of Liv’s Renegade operation mostly through the growth of the ID card printer collection as well as meetings attended by increasing numbers of people. I can’t help but feel concerned by this as it feels like the operation is growing too fast probably as a result of arrogance on Liv’s part. A string of successes likely have her feeling like she’s invincible so she keeps expanding the efforts meaning that it will be easier to track down by Fillmore Graves. 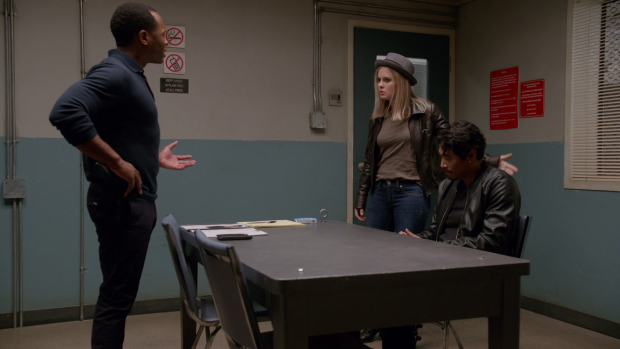 Her fears end up coming true when Curtis (Samuel Patrick Chu) is captured and she’s forced to scratch him to prevent him from revealing the details of her operation by having his brains eaten by Fillmore Graves stories. I get the sentiment of having Liv’s operation potentially compromised by a non Zombie Coyote being captured but the execution of this was laughable. It’s almost as if the writers came up with this idea and then realised there isn’t anyone in the required position the audience will care about so they hastily came up with the celebration of his marriage and unborn child to make the audience invest in him more. It isn’t enough and doesn’t work.

There is the sense that the net is closing in on Liv though. Chase Graves is personally involved in the search for the new Renegade and it’s only a matter of time before he finds out the truth. The fact that Major now knows because he puts the information together easily when he meets Levon and remembers him from the execution. Major’s loyalty to Fillmore Graves is all but solidified at this point so he is now in a very difficult position as he knows the truth about Liv and has a choice to make. I suspect it won’t be long until Chase starts leaning on him for more information and gets an inkling that Major knows more than he’s letting on. My personal theory is that Major will end up telling Chase Renegade’s identity and then choose to step in just before Liv is executed. I’m just unsure if it’s possible to redeem him in a way that’s believable at this point.

Blaine’s relationship with Angus is further developed through their weekly dinners at the restaurant. The show continues to be consistent with Angus’ insanity in a way that is both entertaining and furthers the plot. All that time down the well listening to Blaine talk while feeding on scraps of Brains drove him mad enough to think he was hearing the voice of God. This is the direct cause of his more devout outlook at this point but it runs deeper than initially thought as he now associates Blaine’s voice with the voice of God therefore thinking that Blaine is the saviour of the Zombie race. Not one to turn down unwavering supporters Blaine goes along with the idea. 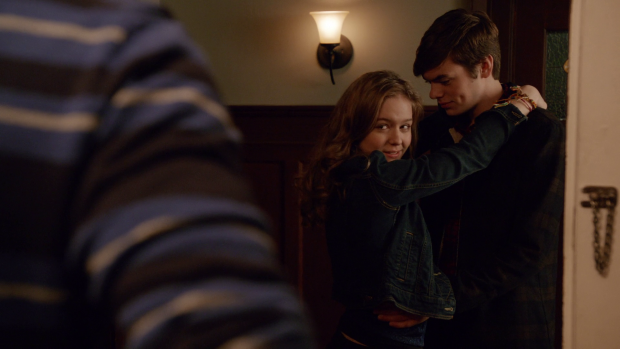 Isobel tries to enjoy what’s left of her life

The most interesting thing about this is that the undercurrent of abuse in this relationship still exists. For example Angus dredges up painful memories when he brings the housekeeper to the church to be devoured by his Zombie flock. On one level he’s attempting to make up for the years of neglect he showed as a father and the lack of action taken on someone he employed abusing his son but on another level he’s putting those painful childhood memories on display to show Blaine that he’s still able to assert that fearful dominance. It’s wonderfully complex and makes any scene featuring these two characters fascinating to watch.

At this point we are three episodes from the end of the season and I’m struggling to feel like it’s really going anywhere. There are a lot of plot threads dangling but there’s no real urgency to any of them. Previous seasons have taken time to carefully construct a narrative that links together in both intricate and surprising ways but that doesn’t seem to be happening here. Many of the individual ideas are fine on their own but the last few episodes develop them in fairly limited ways without making it feel as if they are part of a wider plan that will culminate in something great.

Many of the relationships don’t feel like they are developing naturally either such as Levon and Liv who have gone from casual flirtation to actually being a couple with nothing in-between. Previous episodes showed a great deal of chemistry between them but accelerating them to this point without doing the work feels cheap. This sort of plotting means that a lot of dramatic weight is lost and the revelations don’t really land. 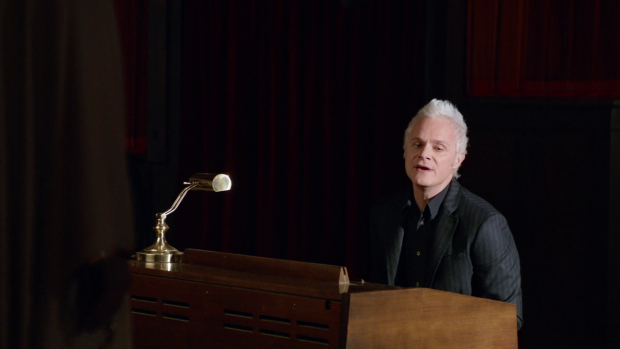 An uneven episode that successfully makes Isobel an important part of the cast by way of a montage and some charming acting from Izabela Vidovic but doesn’t really manage to connect various plot threads in any meaningful way. The montage showing Ravi’s work on the vaccine, the growth of Liv’s Renegade organisation and the binge watching of an in universe meta TV show is effective enough but these stories don’t really come together. There’s a lack of urgency associated with Chase Graves closing in on the cure because Curtis isn’t a character the audience know so can’t really care about and Major finding out about Liv more or less falls apart because there’s still no justifiable basis for his loyalty to Fillmore Graves.

Liv consuming Benedetto’s brain is another thing that goes nowhere other than setting up Liv’s suspension to pay off the joke about TV shows not having the budget to show set pieces on camera. The murder investigation fades into the background once Liv is taken off the case and completely fizzles out. The most compelling story is Angus and Blaine who continue to have a wonderfully complex relationship defined by an undercurrent of abuse. Angus is completely insane in really interesting ways and any scene these characters share is immensely watchable.