iZombie returns to more familiar storytelling when Liv and Major eat the brains of a father and daughter involved in a fatal car accident.

So it’s back to formula this week but for this show the formula doesn’t drag the storytelling down in any significant way. It has always allowed the show to have fun with Rose McIver’s apparently limitless acting talents as she gets to embody vastly different personalities week to week. The beauty of this season is that Major is also a zombie so we get to see personality shifts from his perspective. 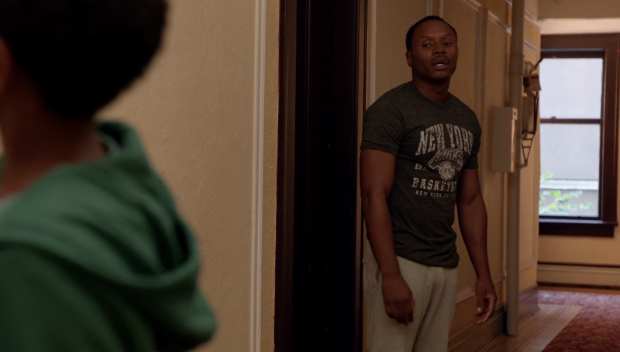 Robert Buckley has proven himself to be a very capable comedic and dramatic actor so it’s great to see him attempt something new by taking on different personalities. Using a teenage girl as the personality he takes on is an excellent choice as it’s something that Major couldn’t be further from. Robert Buckley does an excellent job of overreacting to everything and playing the whole thing as stroppy.

As always the behaviour is a bit of a cliché but since it’s played for laughs it doesn’t feel like an offensive one. All of the major typical teenage obsessions are hit such as selfies, insecurities and embarrassment caused by “adults”. Robert Buckley nails all of it and the whole thing is just a delight to watch.

That on its own would have been enough but the fact that Liv takes on the stereotypical adult role is wonderfully handled as well. Rose McIver’s abilities are never in doubt and the way she sinks her teeth into the dialogue that has her casually calling people classic “Dad” type nicknames like “sport” works perfectly. It makes for an excellent comedy double act with Robert Buckley and allows for a dimension in the personality shifts that we as viewers haven’t seen before.

I’ve always found tone juggling to be one of the strong suits of this particular show and Liv taking on the “adult” personality turns out to be a good opportunity to shift tones in a way that feels natural. In amongst all of Liv’s busy work when it comes to fixing little things around the Morgue she is able to give Ravi some really sincere and heartfelt advice about his relationship with Peyton. He’s upset about the fact that she slept with Blaine and doesn’t really trust himself to behave rationally around her. Liv’s advice is simple guidance to trust himself to be the man he already is and it will work out. It’s somewhat cheesy but there’s a layer of common sense in there and that’s what resonates. 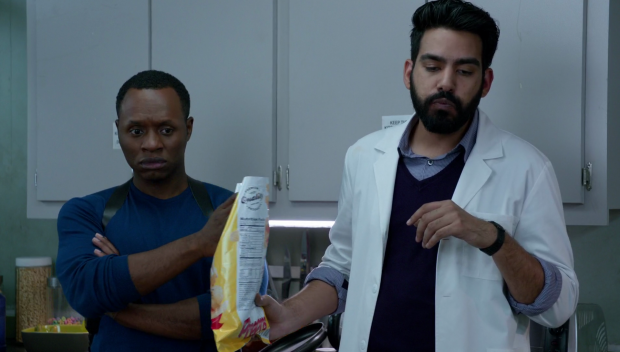 Clive sees brains being prepared as food for the first time

When it comes to Ravi, we get the irrational advice that comes from Major who acts like the best friend agreeing with everything Ravi says. He backs up the level of disgust that Ravi feels and just lets him vent. It’s a genuine friendly exchange that is played for laughs but actually gets some important character development across. Ravi needs to be listened to and not necessarily be told the sensible thing at that point so Major lets him have that. It’s subtle, clever and funny all at once.

We are also reminded that Major is on borrowed time. Ravi is still working on the memory problem but it’s still unclear if Blaine is being honest or not. In the meantime Major has to choose between possibly forgetting everything or certain death and he will start to run out of time very quickly. I feel like the writers are having fun with him as a zombie before digging into the serious side of his condition and there’s no issue with that.

Major also serves another important function in the episode. His mercenary training isn’t causing friction between him and Liv quite yet but we do get the important piece of information that the soldiers take their brains through tubes that have a mixture of brains which means that there are no personality shifts or visions that come with them. It’s interesting that there has been this level of research done on how much brain is required to facilitate these changes but it also shows how different the approach is between Liv and Fillmore Graves. Liv puts it best when she says “in this house, we eat whole brains and we solve murders”. It’s a funny line and it gives us Liv’s position on this alternative. She prefers to do good in her own way and accept the personality shifts. This will likely evolve into a source of tension but for now it just lays the groundwork.

Interestingly the reference to the tubes allows Ravi to hear something on the radio which leads Liv and Clive to a man who shows them a conspiracy message board where people talk about suspected Zombies. It’s the first step towards a Zombie hit list and it’s accomplished through slowly building a throwaway reference into a fully fledged clue. I constantly applaud the storytelling in this show and this is exactly why. 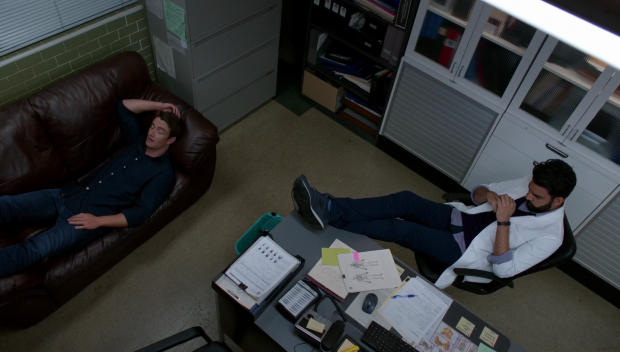 Major is the girly best friend

The case of the week itself wasn’t all that interesting especially when it became obvious that the mother was the killer. It was fine and I know that I often pick on the case of the week simply because it is the weakest part of what amounts to routine excellence from this show. Natalie Alyn Lind was memorable enough and almost succeeded in diverting suspicion but ultimately the case wasn’t that interesting.

Clive was afforded a lot of development in this episode through his connection to the murdered child, Wally (Mataeo Mingo) and his mother Anna (Caitlin Stryker). Showcasing a murdered child is bad enough and creates a lot of sympathy right away but giving Clive a personal stake in it by showing how close he was to them is a good way to make the case feel like something other than a small part of a larger plot. The flashback scenes were really well done with some genuine moments between Clive and Wally. Having him hypothetically wonder if they would still be alive had he had been more involved since then is quietly powerful and letting the episode on that note is really effective.

I also love how Clive reacts to the truth being out in the open. He sees brains being prepared as food and it makes him feel sick. You can see that he almost yearns for the days that he thought Liv was a psychic because he didn’t have to know the gory details of where her visions come from. It still feels oddly familiar but it’s an organic evolution of the dynamic that has developed since the show began. At least the show isn’t running out of steam with the truth being out in the open. This was a great episode for letting Malcolm Goodwin show so many sides to Clive without any of it feeling out of place.

Outside of this there is an extra dynamic developing with Detective Cavanaugh becoming a more prominent presence. He will clearly be used as something of a barrier to Clive investigating murders and his lack of Zombie knowledge will probably have him suspect Clive as time goes on. The scene where he was brainstorming what could have happened to the victims while Liv, Ravi and Clive did everything they could to remain silent was both hilarious and neatly underpinned this conflict. Cavanaugh can’t be trusted as far as they’re concerned so they’re reluctant to indulge in his theorising which contrasts the back and forth we would typically see when Clive is on a case. It almost feels predictable in terms of where this conflict will go but this show always manages to deliver on character conflict. 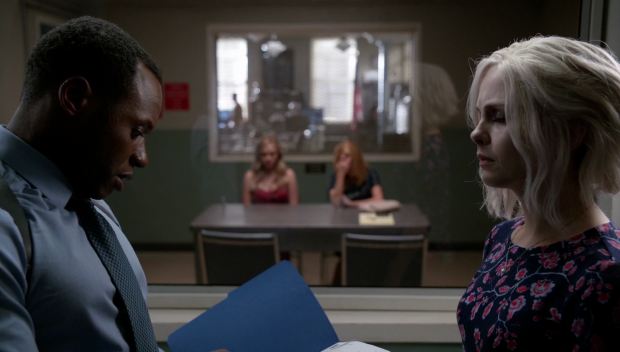 Getting to the bottom of it

An excellent episode that manages provide a lot of humour while allowing Clive some time for serious development. Major on teenage girl brain was excellent and really allowed Robert Buckley to cut loose with a hilarious performance. The way he doubled with Rose McIver who was embodying the “Dad” side of that relationship was a nice touch and it provided different ways for Ravi to work through his issues with Peyton before deciding what to do next. The episode also doesn’t forget that Major is on borrowed time but the writers are clearly having fun with another Zombie being around before digging into the seriousness of his arc.

Learning more about Clive through his connection to Wally and Anna works really well. The flashbacks are really endearing and Clive’s difficulty in accepting it by wondering what might have happened if he had made different choices is quietly powerful. His reaction to seeing brains prepared as food is priceless as well. It was a great Clive episode and Malcolm Goodwin delivered on the acting throughout. The case of the week itself was fairly uninteresting as it was clear who the killer was pretty early on but the way small details were built into the ongoing season arc was really clever. As always I’m excited to see where everything is going.