It was inevitable that having Brainiac inside Seg’s head would lead to an internal battle for control between the two. This sort of thing is very common in science fiction stories; The 100 delivered a particularly excellent example of that exact plot very recently and now Krypton tries its own spin on this idea. The Seg/Brainiac conflict is explored externally for a good chunk of the episode with Adam embodying the audience perspective reacting to Seg’s rapid personality shift and showing increasing concern that his friend is quickly being chipped away by a corrupting influence. Cameron Cuffe plays the Brainiac influence well with a rigid posture coupled with intimidating line delivery bereft of the warmth and emotion usually associated with Seg. There’s no doubt that Brainiac’s corruption is starting to take hold. The transition is played gradually as well with Seg clearly still being the surface personality while his thinking becomes further influenced by Brainiac. 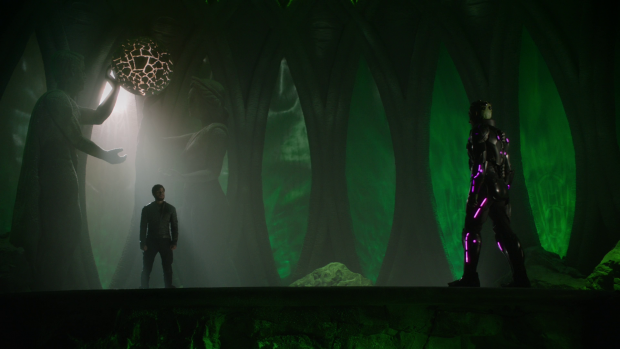 There is another strong showcase for the Adam/Seg dynamic that makes excellent use of the natural Cameron Cuffe/Shaun Sipos chemistry. Adam’s desire to save Seg while being unwilling to kill him if Brainiac wins the internal struggle is a fairly standard sentiment but feels earnest nonetheless and the shared determination to overcome this obstacle is appropriately inspiring. The strongest thing about this show so far this season has been this dynamic running alongside plot that propels itself onward in the unfamiliar surroundings.

One surprising thing is how quickly the Seg/Brainiac plot is apparently resolved. Fortunately a MacGuffin is found on the planet that can remove Brainiac from Seg’s head which makes it possible for Seg to safely return to Krypton. It’s certainly convenient but it also makes sense that such a device would exist on Brainiac’s home planet. It’s largely an incidental creation to make way for the meat of this particular conflict. Using a corrupted version of the Fortress of Solitude that has Brainiac’s eerie green colour scheme creep in suggesting the growth of his influence is excellent shorthand to establish that Seg is in danger of losing himself. The fact that his brain interprets the inside of his mind as the Fortress of Solitude further reinforces how highly he regards family by having the very monument to that be his internal source of strength.

The Seg/Brainiac conflict is really strong as it plays out despite largely being nothing new for this sort of episode. It works so well because it draws on what is known about Seg as a character while leaning into the mystery and menace of Brainiac as he works to shatter Seg from within so he can completely take over. His attempt to turn Seg’s memories against him by taunting him with the potential loss of those he cares about which includes appearing as Nyssa to remind him of the child that he will never see again. His transformation into Lyta looks to be the most profound in terms of impact on Seg as he is able to play up to how Seg sees her and the forbidden nature of their relationship. 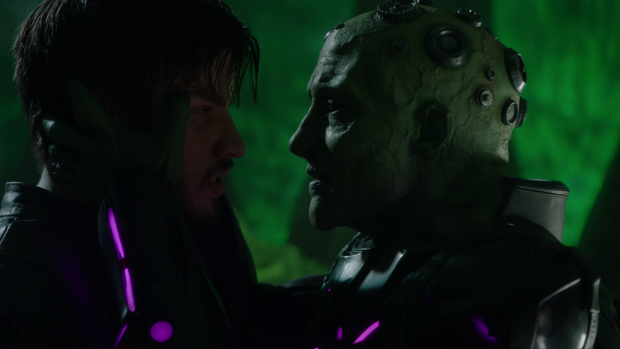 The battle for control

Brainiac offers Seg happiness through submission as he could remain locked in his own mind living happily with this version of Lyta. He thinks that telling Seg everything he wants to hear will allow him to win but it ends up having the opposite effect as Seg embraces his feelings and acknowledges that his pain is necessary for defining him. He uses this to turn the tables on Brainiac by making him aware of his own fear and encourages him to hold onto it before being stripped down to nothing. It’s an immensely satisfying victory and feels appropriate for the conflict that has been built up as it shows Brainiac spends so much time collecting information without actually knowing everything. Essentially Seg attacks him with what he holds most dead and the results are devastating for him.

The Adam/Lobo conflict that plays out externally is equally strong but in a more comedic way. Lobo takes a while to appear in this episode but is used brilliantly when he does. Cutting his own arm off and blowing off his own head to regrow inside the force field is an excellent use of his healing ability and allows the episode to mine comedy out of his temporary relative helplessness juxtaposed with his casual attitude to the situation. Emmett J. Scanlon continues to be note perfect in the role still coming across as equal parts goofy and formidable. Knowing he can’t be killed gives him carte blanche to have a lot of fun with those he hunts because he knows that he will eventually win. The visual effects of his body growing back are stunning and the banter he has with Adam is a lot of fun to watch. Shaun Sipos does a good job of playing the terror that he’s trying to hold back as Lobo quickly becomes more threatening. Seeing him walk on his fists without his legs having grown back is a really fun touch that also shows how in tune with his abilities and skills Lobo is. His appearance in this episode is brief but effective and I hope this isn’t the end for him or Brainiac this season as they both have a lot to offer.

Lyta and Zod’s relationship is explored further by addressing Zod’s refusal to send her to Wegthor head on. This decision turns out to be motivated by his memory of losing his mother. He talks about how the loss of Kandor directly led to her death because she completely lost hope after that point. The implication is that she perhaps committed suicide once she became overwhelmed by that loss and Zod has no desire to watch his mother die again so keeps her in assignments that are more likely to be safe. This episode sees him reflect on that decision and realise that it was wrong as he is letting his personal feelings override the oath he took to protect Krypton. Since this is against everything he stands for he has to reconsider and put Lyta where she will be most useful. 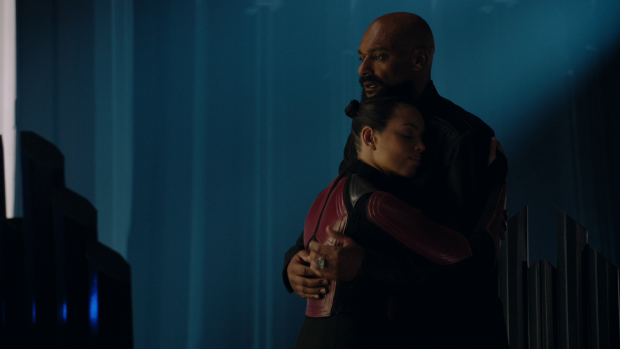 Pretty much everything about how their relationship plays out works. Lyta further demonstrates how strong willed she is by confronting Zod over his decision to bench her because of his personal feelings. She doesn’t accept the future that may now never come to pass but wants to become the version of herself that Zod looks up to. The scene where he decides to let her go to Wegthor is a great showcase for Colin Salmon in this role; Zod is in a rare emotionally vulnerable position both when he talks about Krypton’s destruction and recalls the loss of his mother; this adds layers to the character that make him even more fascinating. There’s a sense that he won’t be able to open up to anyone else except Lyta because of that familial connection and it’s clear how difficult it is to let her go into harm’s way. Georgina Campbell plays Lyta as maternal and understanding ending on a hug to reassure her son that everything will be fine. The hug itself is a fascinating moment that looks out of place because of how much taller Zod is. He’s in a physically dominant position where Lyta is in the emotionally dominant position. Colin Salmon playing discomfort when being hugged by Lyta is an excellent touch as it heavily implies that Zod has been starved of affection in his life. Now that he has stopped protecting Lyta it’ll be interesting to see how this continues to evolve.

The weak link in the show so far this season is Val’El’s resistance. We’re now at the point where there is a plan starting to take shape but very little actually happening. Nyssa is still the most interesting element at play in this situation as her allegiances remain a mystery and Wallis Day does an excellent job playing her conflicted nature. There are arguments for her falling on either side in this very episode with Val giving her a meaningful pep talk about family and unity. He tries to give her hope and tells her that she’s better than her father. It’s supposed to help inspire her to believe in Val’s cause. There’s warmth in his voice which points to him caring for Nyssa beyond her worth to his resistance movement, the fact that he takes the time to reassure her that everyone will look out for her is another indication of what is being fought for as a counter to Zod’s clinical militaristic regime. Later in the episode Nyssa gathers information by reconnecting with an old lover to use her to steal whatever information Zod needs but Wallis Day portrays strong reluctance on Nyssa’s part keeping whatever her final decision will be ambiguous. 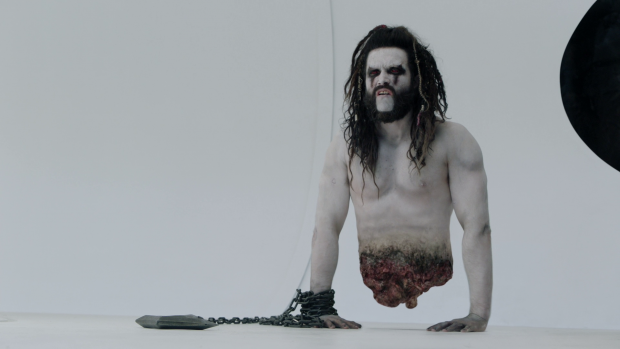 If I was half the man that you are!

A strong episode that continues the strong Seg/Adam plot involving Brainiac and Lobo while adding texture to Zod as a character through how he relates to Lyta. The Seg/Adam dynamic is as watchable as ever and the added complication of Brainiac is used really well through Cameron Cuffe’s performance and a fascinating battle for control of Seg’s mind later in the episode. Adam and Lobo make for a fun pairing as well with some creative uses of Lobo’s powers to further establish him as a credible threat. Hopefully this won’t be the last of him and Brainiac this season. Equally fascinating is the Zod/Lyta dynamic marked by the shift in Zod’s position on sending Lyta into the field. He talks about his memories of losing his mother and admits it has coloured his judgement at this point though Lyta wants the opportunity to become the mother he remembers. Seeing Zod in such a vulnerable position is excellent and the hug is a particularly powerful moment as it looks out of place with Zod occupying the physically dominant position to contrast Lyta occupying the emotionally dominant position. Colin Salmon’s choice to play discomfort during the hug says a lot about his experience of affection in his life.

The weak link so far this season is Val’s resistance movement because of how slowly the plot is building. At last the beginnings of a plan are being hatched but it isn’t going anywhere quickly enough. Nyssa remains the most fascinating element as her true allegiance remains a mystery at this point. There are strong arguments for both eventualities in this episode through a strong scene between her and Val that makes it clear she has a family within his movement. Later in the episode manipulating a former lover to steal information but being reluctant while doing so keeps her final decision ambiguous.