Loki strands the titular God of Mischief in an Apocalyptic situation with none other than another version of himself.

So far, Loki is a show that is delightfully unpredictable with the first two episodes setting up a situation that looked to define the structure of the series with a clear objective for Loki to accomplish and a setup that enables him to gather information in pursuit of it. The objective remains but the structure has gone out the window -along with Loki himself- so it’s unknown how things will play out. 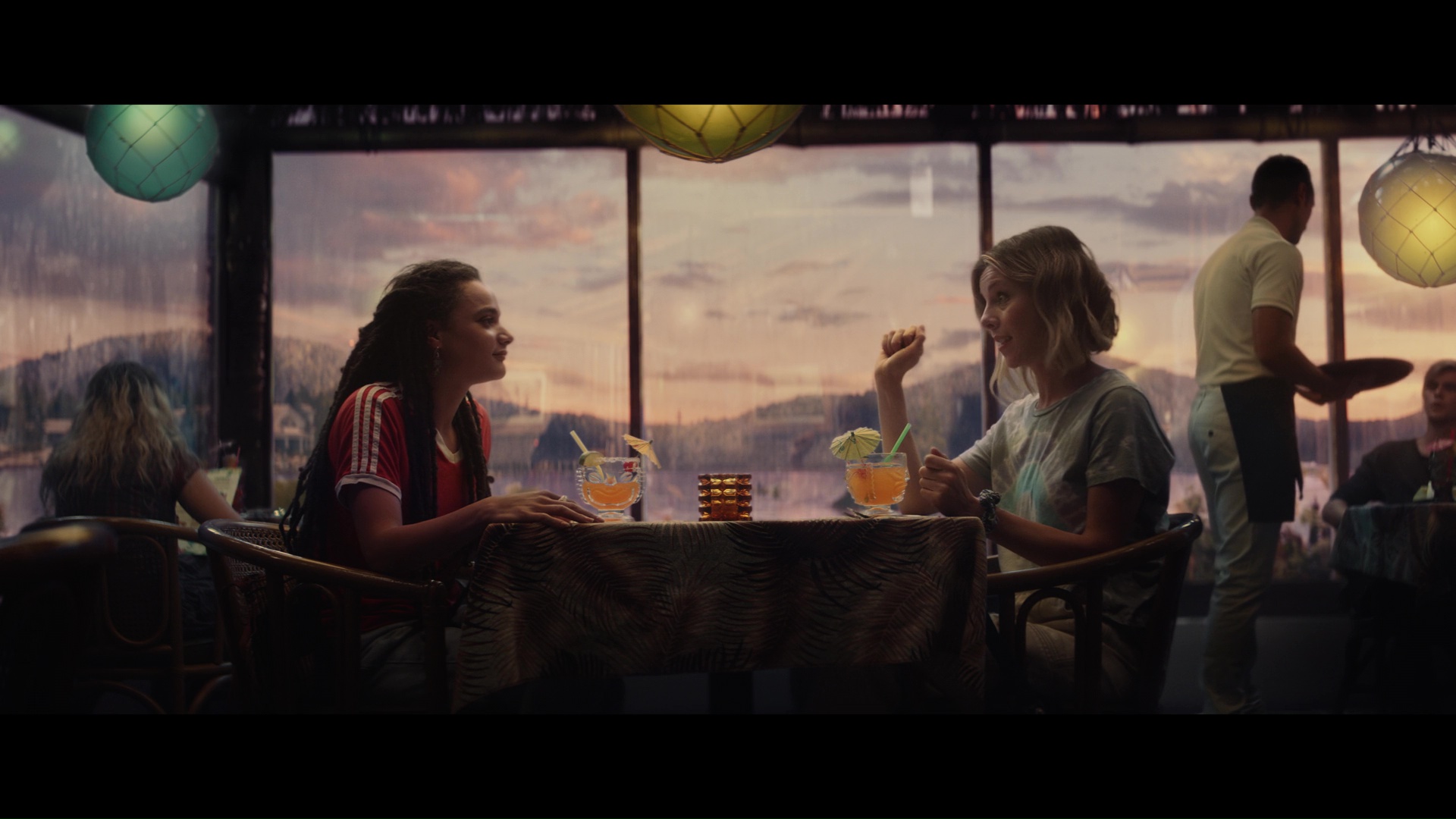 This episode is mostly a two hander between Loki and a female version of himself who goes by Sylvie which mercifully saves me from finding creative ways to distinguish the two while writing this review. They are forced to work together when stranded on a doomed moon in order to find a way to recharge a stolen Tempat so that they can make their escape. Being Loki Variants they don’t trust each other but come to a mutual understanding that allows them to be around one another until the advantage shifts in either direction.

It’s exactly what you’d expect when two Lokis get together. Both are aware of the predisposition towards deceit so neither is prepared to trust the other. Sylvie has the knowledge on how to operate the Tempat and Loki has the Tempat so on a basic level they are useful to one another which justifies them not killing one another for the moment. It’s a simple yet highly effective excuse for them to continue to interact and this episode boasts some really impressive character work enhanced by excellent performance from both Tom Hiddleston and Sophia Di Martino.

Sylvie is a distinct character who appears a lot angrier than Loki on first impression. She talks about being on a long calculated quest to overthrow the Time Keepers so is understandably irritated when Loki clumsily wades in and ruins her carefully cultivated plan. Sylvie has no problem expressing that anger and constantly challenges him to be completely alert because she understands exactly what he’s capable of when people drop their guard. At the same time she clearly recognises that there are fundamental differences beyond their gender so is constantly wary of him. 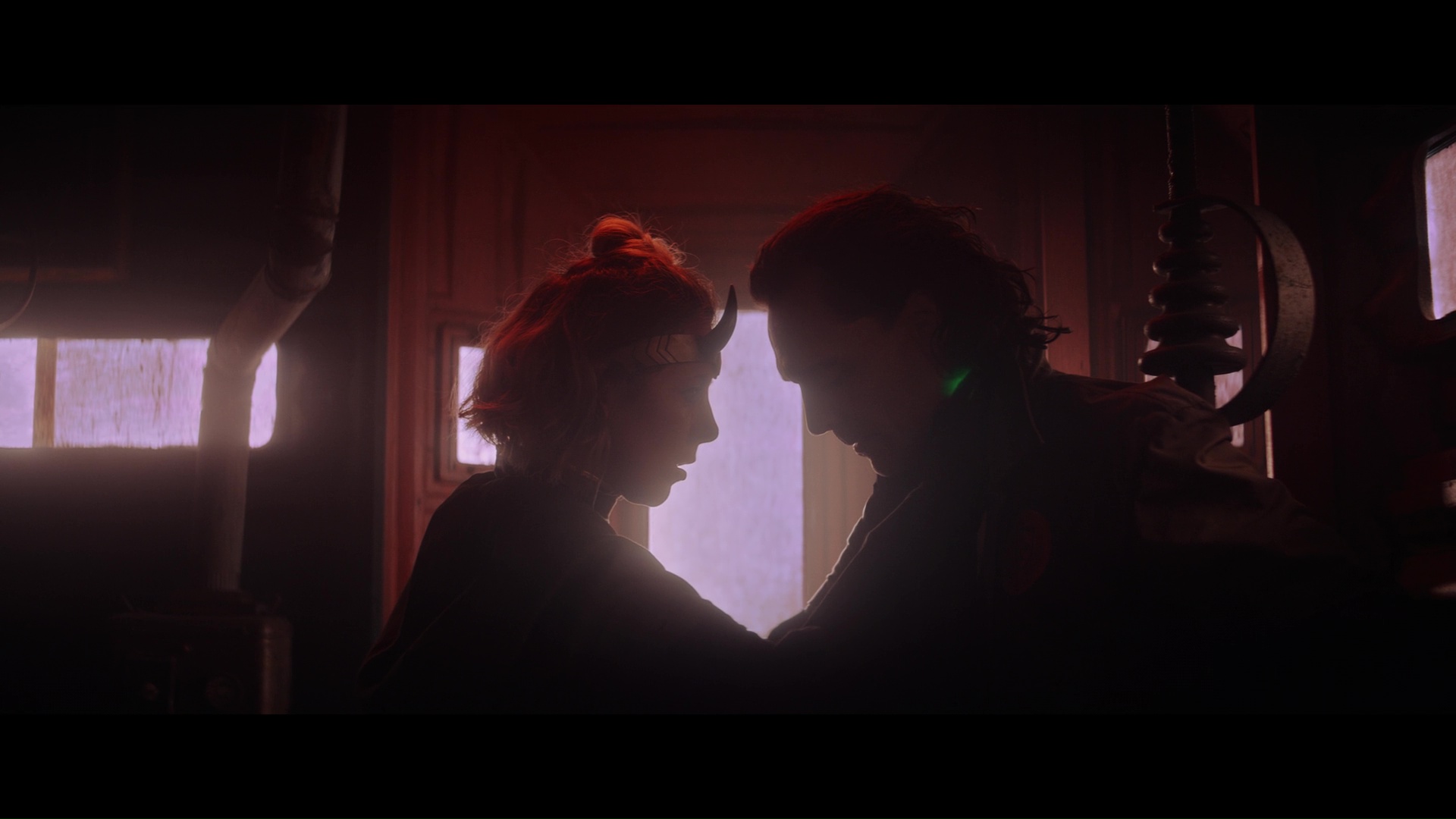 No enchantment for this Loki!

Their dynamic is founded on mystery with each of them starting out with the intent to be as vague as possible when it comes to opening up to the other. Sylvie keeps her cards close to the chest and Loki wants his own mystique to remain intact so that he can gain the upper hand. As the episode progresses this shifts with Loki being the one to open up about various things while Sylvie give him very little in comparison. The way she manipulates him is masterful by appealing to his ego through his magic. Once she compliments him on it he’s all too willing to open up to her about how he learned it. This leads to another moving account detailing how he feels about his mother with a heart-warming story from his childhood where she believed in him and inspired him. It’s masterfully told with the loss weighing on Loki seen through Hiddelston’s performance. In comparison all Sylvie admits to is having a long distance postman boyfriend which could be a lie. Given what has been established about Loki’s connection to his mother there’s no doubt as to the authenticity of his story. If this is a battle of wits then Loki is on the losing side based on how willing he is to open up.

Loki is oddly fixated on love as a concept and as a profound connection. It forms a root of some of their key interactions meaning that it’s clearly something he holds in high regard. He mentions that there have been lovers over the years of both genders but never anything real and there’s deep regret in his voice as he admits this. Once again another showing of vulnerability on his part with Sylvie leading him in that direction. His dagger metaphor may be hilariously off kilter but it does firmly establish that he sees love as being something close but eternally out of reach. On some level that may inform his desire for conquest as it could represent a desire for that sort of validation that he can’t get on the intimate level he desires. It could also be a trick to get Sylvie to open up that I’m also falling for but there’s an undeniable sincerity connected to the regret in Hiddleston’s performance that makes it interesting. Sylvie states that she believes love and hate to be one in the same which hints at regret in her own past that she won’t open up about and could point to her having an equally strong desire for companionship. Such a thing adds a fascinating subtext to their reluctant partnership.

Outside of the deeper ruminations on love, loss and existence there are plenty of laughs. Loki and Sylvie are endlessly watchable with a natural back and forth that more than carries the episode. Tom Hiddleston and Sophia Di Martino have excellent chemistry that allows them to bounce off one another flawlessly. Both are capable with saying so much with a particular look which constantly enhances their comic timing. There’s a good mix of antics, action and dialogue to keep things from growing stale. 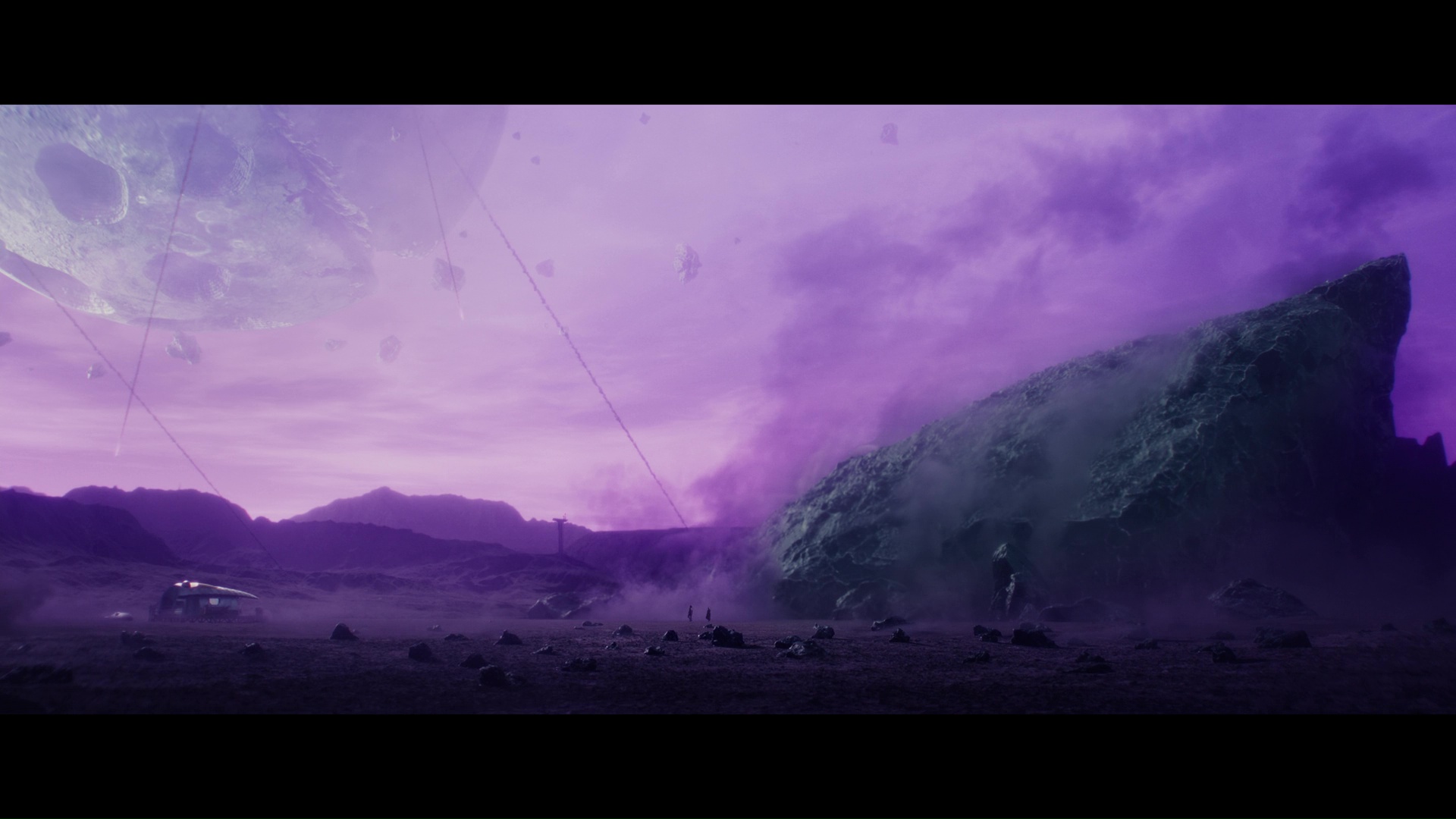 The situation they find themselves in is very simple though oddly lacks a sense of urgency. Much of the dialogue references the inevitability of death and destruction but it never feels like an immediate problem that needs to be escaped. A lot of that has to do with all the time spent sitting and talking with no strong reaction to the danger they are supposed to be in. The lack of a ticking clock indicating how much time remains may have something to do with it but the dispassionate approach both of the main characters take to their predicament certainly doesn’t help. An Apocalyptic scenario is surely a free pass to keep the plot moving but Loki and Sylvie broadly treat it as an incidental detail or a mild inconvenience. This changes somewhat when the approach the Ark and fight their way get aboard but even then it isn’t as urgent as it should be.

For the most part this is a singular story -or more accurately half of one- though there is some attention given to the larger story. The Time Keepers are considered to be the enemy so the focus remains on stopping them. Sylvie is much further forward in working to bring them down and has far more information than Loki does. The episode opens with her enchanting Hunter C-20 (Sasha Lane) by conjuring up happy memories where she takes on the role of a best friend in order to manipulate her into giving up information about the Time Keepers. It almost works but Loki unfortunately interrupts leaving her back at square one.

She reveals to Loki that the TVA are made up of Variants that have had their minds wiped rather than being created by the Time Keepers to maintain the Sacred Timeline. Sylvie enchanting Hunter C-20 gives a demonstration of this particular ability to back up the explanation she gives to Loki later but it also highlights the horror of what the TVA are capable of. Instead of creating drones to do their bidding they violate people who have had the misfortune of stumbling into a deviant timeline. There’s no question around how nefarious they are and each agent of the TVA are now established to be victims that need to be freed rather than defeated. Loki’s altruistic streak is shown when he comments on all the people denied access to the Ark and left to die on the surface of the mean which suggests he may make it his business to be the saviour of those forced into servitude by the Time Keepers. He certainly seemed to have a strong enough connection with Mobius to at least be motivated to show him the truth but time will tell.

It’s also worth noting that Loki being enchanted by Sylvie can’t be ruled out as a possibility. She attempts to enchant him early in the episode and it appears not to work but that could simply be part of the enchantment. If he believes himself to be too strong to be enchanted then he will let his guard down which will render him more malleable. It would certainly neatly solve the “trapped in an Apocalypse with no hope of escape” cliffhanger though it could also be very cheap if handled improperly. The focus on enchantment and how it works certainly points towards it being an important fixture in the coming episodes. 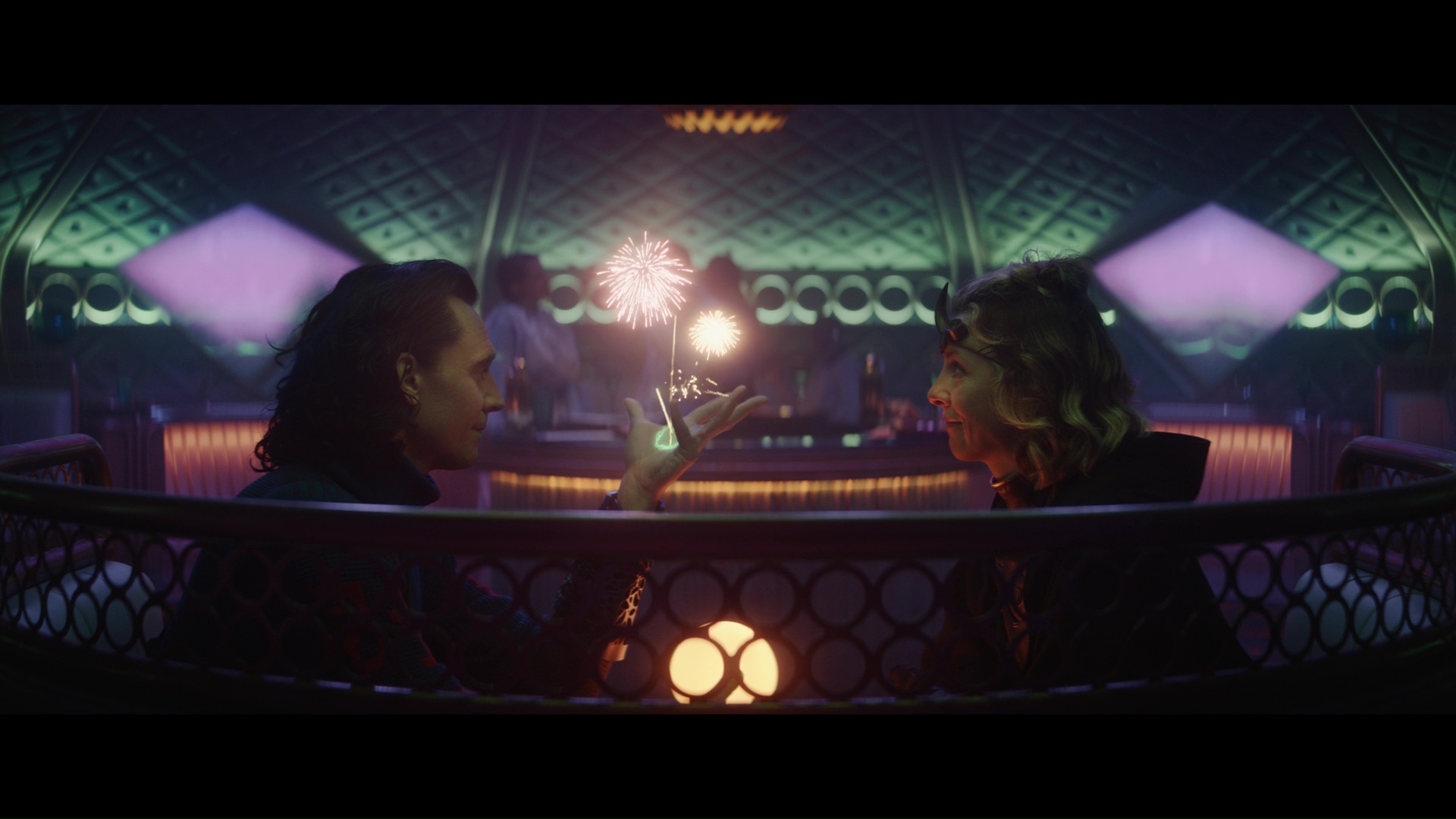 An entertaining episode with a great central dynamic, strong performances and added intrigue around some of the larger details of the show. Loki and Sylive are endlessly watchable with a believable dynamic that compliments them both being versions of Loki. The lack of trust leading to a truce founded on both of them having something useful to the other justifies them working together temporarily without killing one another. Sylvie is a distinct character who is a lot angrier than Loki on first impression and is fixated on her goal of overthrowing the Time Keepers. She is understandably irritated when Loki clumsily ruins her plan but has a constant focus on her goal. The way she manipulates Loki to open up while giving him very little is masterful and it prompts another moving account of Loki’s relationship with his mother beautifully delivered by Tom Hiddleston. Their discussions about love are interesting as well and reveal a lot about what Loki desires assuming he is being honest. There are also plenty of laughs with a good mix between antics, action and action to keep things from growing stale. Tom Hiddleston and Sophia Di Martino have great chemistry that more than carries the episode.

The situation they find themselves in is very simple though lacks a sense of urgency. It could have something to do with the lack of a ticking clock or Loki and Sylive treating it as an incidental detail or minor inconvenience. Either way the Apocalyptic scenario lacks the necessary urgency. The focus on how enchantment works leads to Loki learning that the TVA are made up of Variants that have had their mind wipes rather than being creations of the Time Keepers. This reframes members of the TVA as victims who have been violated and need to be rescued with Loki’s compassion shown to the large amount of people left to die suggesting that he will be the one to do it. It ties into his saviour complex and his overall complexity. Showcasing Sylvie’s enchantment ability backs up the later explanation while also showing the horror of what the TVA do to people. The possibility of Loki being enchanted for most of the episode can’t be ruled out and would track with Sylvie’s manipulation of him shown elsewhere. It would likely be a cheap resolution to the cliffhanger but also far from impossible.