Lucifer closes off the three episode arc with a race against time to save Chloe from certain death while allowing Lucifer to face his own personal Hell.

On paper the concept of the Devil facing hell is really laughable. What would torture the most infamous torturer that has ever been? Lucifer attempts to answer that question while working within the framework of the character that has been established over the past two seasons. 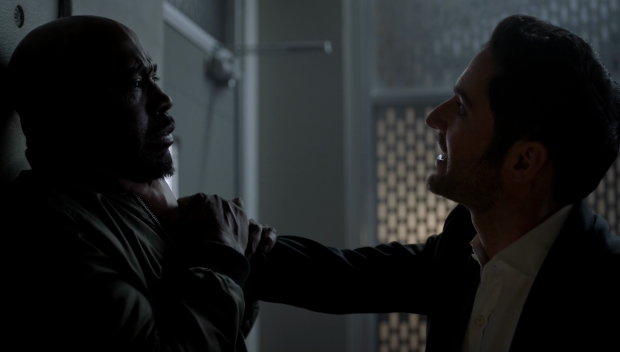 Lucifer wants to know the truth!

The one defining moment for Lucifer this season has been killing Uriel. It’s something he felt that he had to do but at the same time it’s something he wished that he hadn’t done. His feelings about it are complicated as you would expect so having this appear as the punishment that he feels that he deserves makes complete sense. It is established that Hell is what you make it and the torture comes from the fact that all you do for eternity is relive it over and over again. People do things they regret all the time but on Earth we have the luxury of other events happening in our lives that distract us from our regrets. We are basically spared from constantly dwelling on mistakes but in Hell that isn’t the case so the prospect of reliving the worst mistake ever made is horrifying.

At first he thinks his brother has really ended up in Hell rather than simply being destroyed. The illusion working on him shows us how powerful a place Hell is if it can even confuse Lucifer. If anyone would be immune to it then it would be him but the effects aren’t lost on him. This probably has to do with him giving up being in charge but it still tells the audience that it isn’t a place to be taken lightly.

Tom Ellis completely sells the notion of eternal torment that Lucifer is forced to endure. The look on his face as he continually plunges the knife into his brother says everything that needs to be said and his exasperated tone when speaking really enhances it. There’s a lot at stake with Chloe’s life on the line but Lucifer is still unable to forgive himself for what he did.

Of course this also allows him to confront it since he has been avoiding thinking about his actions. It’s actually beneficial for him to be able to look his brother in the eye and begin to answer for what he did. The key is to forgive himself which doesn’t really happen but he is able to begin processing it. He admits that he regrets doing it but also had his reasons. It isn’t until “Charlotte” appears that Lucifer is able to put everything into context. Uriel was going to go after Chloe and “Charlotte” so Lucifer had to do something. Unfortunately that something was stopping Uriel through killing him because otherwise he would keep on coming. 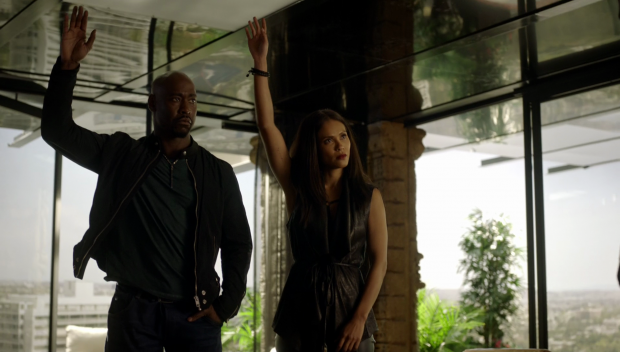 Don’t all rush to kill me!

Interestingly, “Charlotte” showing up flips the torment towards her. Instead of Lucifer feeling tormented over killing his brother, “Charlotte” is tormented by the knowledge that Lucifer killed for her. She essentially turned her sons against each other and it escalated beyond the point she ever imagined it would. “Charlotte” caring about her family has never been in doubt but she is also really manipulative which basically caused this situation. Having her assume the torment for her son is a very motherly thing to do as it constitutes a personal sacrifice on her part so that Lucifer could find the necessary strength to escape. Of course her sacrifice almost doomed her to an eternity of facing the death of Uriel and she even comes around to the idea of staying because she can at least see her dead son in a limited capacity. It’s a really powerful and layered scene that asks a lot of the characters and the actors pull this off flawlessly.

Lucifer’s idea to enter Hell is all in service of saving Chloe. His feelings about God having a hand in Chloe’s creation for some grand plan that we aren’t privy to yet have to be pushed aside because the life of someone he cares a great deal about is at risk. This race against the clock takes the place of the case of the week and it manages to be largely successful because the stakes are directly linked to Chloe. I don’t think the specific scenes always work effectively but there are some really memorable moments in there. Lucifer ambushing the first lead with his white shirt contrasting his face in shadow is a really memorable image and the antics with Dan later in the episode are noteworthy because they’re amusing. Dan and Lucifer always make for a watchable team up and this episode is no exception. Beyond that some of it feels like busy work to raise the urgency. It does work but the approach feels inconsistent.

I found the resolution of Chloe being in danger to be really well done. Obviously the writers want to keep Lucifer and Chloe apart for as long as possible since most of the fun of their relationship comes from the will they/won’t they dynamic that has defined it so far. Normally I would find this frustrating but not in this case. It feels very natural as the obstacles don’t simply seem like excuses to force them apart. Lucifer dealing with the fact that she is part of his father’s plan in some way is something that works really well. He can’t be with her because he thinks that he’s doing exactly what his father wants him to do and doesn’t want to drag Chloe into this either because being part of this isn’t her fault.

“Charlotte” tries to tell him that God’s plan doesn’t make his relationship with Chloe any less real or important but Lucifer is broken by the revelation. He has absolutely no reason to listen to her in particular even when she’s honest with him because at this point there’s no way he could tell the difference. Him leaving at the end of the episode makes a lot of sense because the best way for him to process this is to be nowhere near it. I really look forward to seeing how this progresses when the show returns in May because this is a relationship I am personally invested in and every complication feels like a worthwhile one. 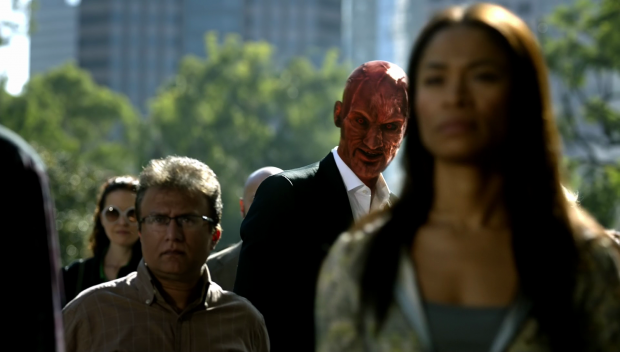 The most entertaining scenes in the episode were around the ludicrous plan to kill Lucifer so that he could get back into Hell. Linda describes it as a Celestial Planning Session and there is really no better way to put it. The whole thing is allowed to be taken less than seriously even though Lucifer is deadly serious about it. This show has always been great at switching tones on the fly and this is a clear example of that. The scenes in the hospital where Maze and Linda struggled with the prospect of killing him were appropriately hilarious as well. I also found Maze’s heartbroken reaction when she thought he wasn’t coming back to be really well placed. Again, it’s a great example of switching tones while still having everything feel like it belongs.

Dr. Carlisle is back and I was really surprised by this. He was an effective villain last week and I mentioned that it’s probably best not to overuse him but a handful of appearances is probably fine. This use of him was vastly different to last week as he was completely in control of the situation but now he is overwhelmed and hopelessly lost. He is doomed to relive his biggest regret of dooming someone to die to save a document with the added twist of everyone immediately passing judgement on him.

It’s a lot to take and he’s already broken by this. I love how Lucifer manipulates him into cooperating by suggesting that it might be enough to get him out of this situation. I suppose Lucifer knows that it’s possible but he also mentions that it has never happened before. The knowing smile he gives as he leaves him to his fate perfectly sums up that Lucifer feels Carlisle is getting what he deserves.

I was impressed with the quick additions to Ella’s backstory that appear in this episode. When looking for the final ingredient for the cure we learn that she used to steal cars, has a lot of criminal connections and has a brother who doesn’t speak to her because he’s frightened she’ll turn him in since she’s on the police force and he’s a criminal. It’s a lot of information to get but it comes so naturally that it doesn’t feel forced. Aimee Garcia has a lot of charm as Ella and it’s reflected in the casual way she reels off these facts about her life. She may still be a supporting character but more layers are appearing all the time.

My only major criticism of this episode is the visualisation of Hell. Other than the rooms that we see taking the form of familiar locales the corridor separating them looks really dull. It looks the same as it did in the first season finale and everything about the design feels lazy. It’s really at odds with the ornate and fantastical descriptions of Hell we’ve been party to and I wish the show had left it as something we simply imagine. 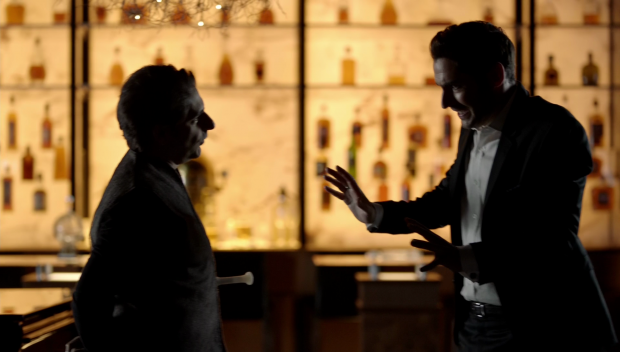 This is going to take forever!

An excellent episode that allows Lucifer to process the feelings he has about killing his brother. Tom Ellis sells the torment perfectly as he relives the moment over and over again. “Charlotte” proving herself to be motherly when the burden is flipped towards her is really effective as well as it allows Lucifer to break out of the endless cycle. It’s really good character work and the actors sell it perfectly.

Anchoring the case of the week on the stakes of Chloe’s survival was a good idea and it was mostly well done but there were some moments that felt like busy work to raise the tension. It doesn’t fail by any means but it could have been better. The most entertaining moments were surrounding Lucifer’s plan to return to hell with impressive shifts in tone that still make the whole thing feel natural. Despite the end of the episode lengthening the time before Lucifer and Chloe get together it’s a relationship worth investing in and the obstacles feel natural. I look forward to seeing how it progresses in May when the show returns.