Lucifer returns from a long hiatus that picks up a short time after the events of the previous episode and deals with the fallout of Lucifer’s decision to leave.

It’s very jarring for there to be such a long gap between episodes but to have only two weeks have gone by in the lives of the characters. It’s essential in terms of the storytelling but part of me expected this to pick up more or less in real time. None of this is negative in terms of how the episode plays out but I felt that it was worth mentioning. 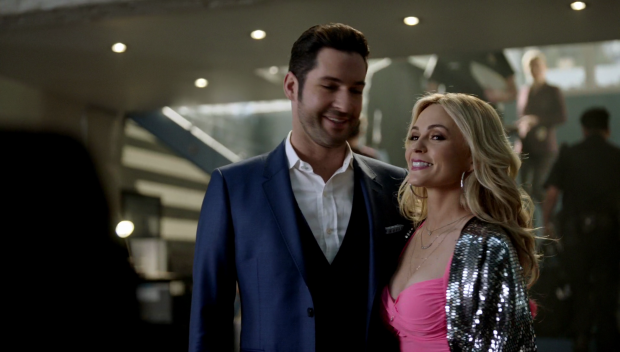 There was a lot of uncertainty at the end of the previous episode with Lucifer finding out that Chloe had been created as part of God’s mysterious master plan. Lucifer couldn’t have his life be manipulated like that so chose to cut himself off completely and regain a semblance of free will.

Whether this was the right decision or not is absolutely up for debate and this particular episode doesn’t spend any time discussing the notion of free will. It’s definitely implicit in everything that goes on but nothing about it is explored in any way. Having it hanging over the show is fine for the moment as it’s something that can be detailed more once things progress.

Lucifer’s return into the lives of everyone who thinks he abandoned them is a shock. Chloe’s reaction shifts from concern over his well being to being angry and annoyed with him pretty much instantly. She has every right to feel like that because they were at the point where their relationship was about to progress before he left with no explanation. Her reaction is exactly what I would expect from her and immediately their dynamic is a lot of fun. The only reason she is angry is because she cares so much. This is definitely a feature of their relationship.

With this being the central relationship of the show it’s clear that them being apart won’t last for very long. It could perhaps have lasted longer than this episode but I’m also not interested in drawing out separating the two lead characters. Amusingly it isn’t just the audience who want Lucifer back in the fold as both Dan and Ella admit to missing him and wanting to reconnect the partnership. Seeing how Dan has come to value and respect Lucifer is one of the best things this show has done as it has been developed so seamlessly. 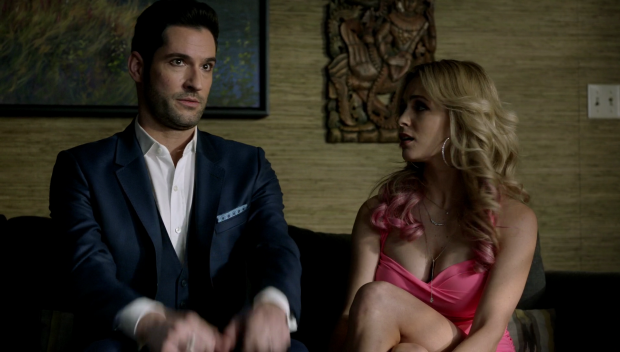 Lucifer brings a surprise back with him in the form of his new bride, Candy Morningstar (Lindsey Gort). Her introduction reminds us of every bout of self destructive behaviour Lucifer has had since the show began and that’s exactly the point. Marrying an exotic dancer might seem like a cliché thing for Lucifer to do but the point of it is that nobody is surprised that this has happened which means that nobody suspects that there is anything more to it than Lucifer taking leave of his senses.

Interestingly the reveal is set up early in the episode when Lucifer mentions that he takes marriage very seriously. When first said it seems like a throwaway line but it ends up being an important clue when considered in hindsight. Even though it seems like expected Lucifer behaviour to leave town and come back with a marriage he entered into while drunk and on a hedonism binge it’s actually out of character for him to enter into something he takes so seriously under those circumstances. It’s rare to see something both in and out of character that actually works.

The presence of Candy is primarily designed to test “Charlotte” and let Lucifer learn more about what his mother is up to. Her act is so convincing that “Charlotte” doesn’t know what to do about it. She calls her the most formidable opponent she has ever faced which is hilarious to see delivered by Tricia Helfer but also really clever in terms of what this episode is actually about. Lucifer intends to confuse his mother into revealing the truth that the fact that Candy is so skilled at deception allows this to happen. This works especially well when Maze puts the idea that Lucifer must have a plan into “Charlotte’s” head. Amenadiel points out that it’s possible there is no real agenda but that’s not something that “Charlotte” can accept. Her anger and confusion quickly shifts to concern and regret as she considers that her son might actually be broken and she may be the cause of that. It’s a complex set of emotions to go through in a short time and Tricia Helfer plays this perfectly. Her delivery of the line “I’m a terrible mother” is really powerful.

This ends up leading to Lucifer and “Charlotte” discussing her plans. Thanks to Candy she has learned that attempting to manipulate him is wrong and this changes her outlook to be more inclusive than dismissive. She outlines her plan exactly and tells Lucifer that the thing they need to storm Heaven is already in their possession. It definitely thickens the plot and it’ll be interesting to see how Lucifer reacts to this new temptation. 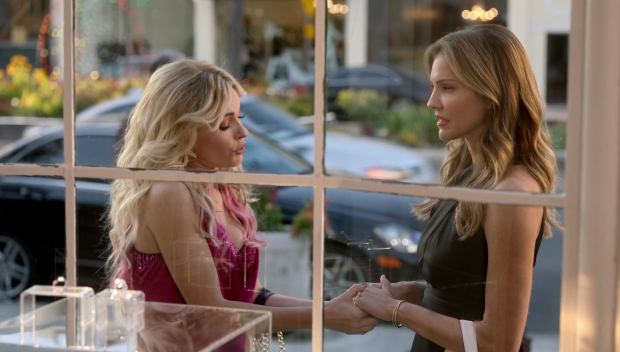 Another advantage to the Candy deception is that it manages to get most of the lingering feelings out in the open. As I mentioned above, Lucifer has doubts about Chloe’s real feelings for him. He accepts that they are real to her but he also thinks she had absolutely no control over them because of God’s manipulation. Again, whether this is accurate or not has yet to be answered but Candy being in the mix allows these feelings to be explored. When Chloe pretends to be Candy for a case they are able to have an open and honest conversation about the state of their partnership. It gets the feelings out in the open which turns out to be almost enough to repair the bond. It’s also great to see Lauren German play an over the top “Bimboesque” version of Chloe as she seldom gets the chance to break character in such a way.

The reveal that Candy is actually part of Lucifer’s plan to understand “Charlotte’s” schemes is brilliantly handled. Lindsey Gort plays two distinct versions of the same character wonderfully and puts across everything you need to know about the second in only one scene. There’s scope for her to return as we have no idea what it was that Lucifer saved her from in Vegas but if she doesn’t come back then her purpose has been well served in this episode.

Naturally there’s a case of the week and the mechanics of it are really interesting. I liked the mystery surrounding the musicians and a Base Guitar as a murder weapon. The way the case allowed for the most entertaining scenes to happen was a nice touch as well as it allowed the episode to flow in a way that it often doesn’t which definitely makes a lot of difference.

An excellent return that addresses Lucifer’s absence while working to repair the central relationship. The Candy reveal works wonderfully as it is such a convincing deception to everyone including the audience. Seeing how it provokes “Charlotte” into realising that manipulating Lucifer is the wrong thing to do and it leads to an open and honest conversation about her plans.

Candy’s presence also allows Chloe and Lucifer to confront their feelings for one another and have an honest conversation about their partnership that almost repairs the rift. I do think that this is resolved a little too quickly though I also appreciate it not being dragged out for too long. Behind all of this is a discussion on free will that the show isn’t having but will have to sooner or later. The case of the week was really well done as it allowed the most entertaining scenes to happen which allowed the episode to flow really well when others don’t This was a confident return for the show and sets things up nicely for the remainder of the season. 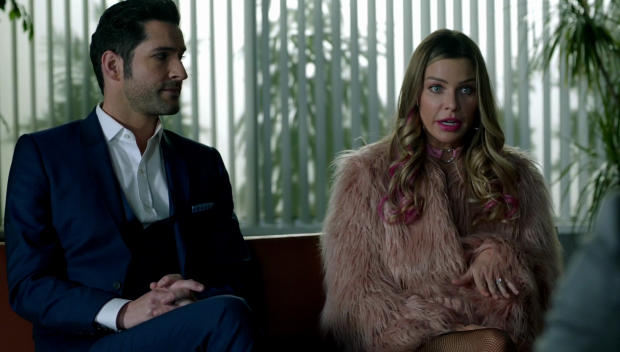