Lucifer returns from Winter Hiatus with a trip back in time to events that happened before “Pilot” showing Lucifer’s early days on Earth.

This episode marks the final unused season 2 episode and represents another slight break in the normal format by taking the characters we know and showing how they were before the show began. Lucifer has just arrived on Earth, Amenadiel doesn’t approve and Chloe isn’t a detective yet. 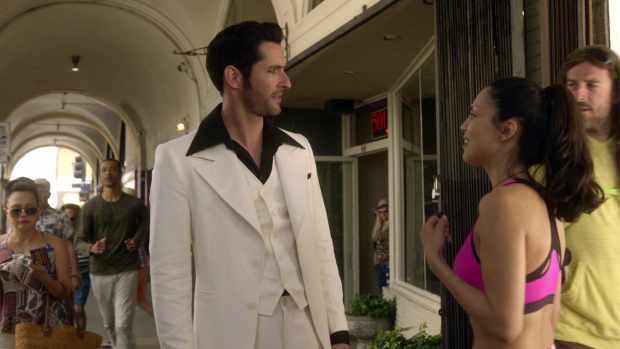 Flashback episodes like this are always a bit of a mixed bag to me. There’s a novelty value to them that makes them fun to a degree but once that wears off I’m left wondering what the point of it was. That thinking definitely applies here but the episode isn’t entirely without merit.

The focus of this episode is on the Lucifer and Amenadiel relationship. We’ve seen in the present day that they aren’t on the best of terms so there is definitely a story to be told when looking at both of them at an earlier point. In this case their relationship is explored at the point where Lucifer decides to abandon Hell and spend some time on Earth.

I was really impressed that the actors -and writers- managed to present the characters in a way that resembles how they were in season 1 while still being different. The lessons haven’t been learned, growth has still to be achieved and there’s a rawer quality to everyone that helps sell the time period. 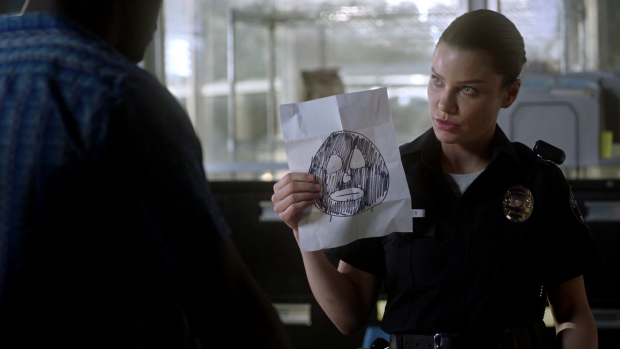 Lucifer and Amenadiel spend the episode completely at odds with one another. Amenadiel is very much motivated by doing God’s bidding and taking responsibility for ensuring that Lucifer returns to Hell. The reality is he has no way to make that happen because Lucifer isn’t interested in going back but he talks confidently about forcing him to do so in the hopes that it will scare him in some way. As is consistent in their relationship Lucifer mocks Amenadiel for trying to force him to do anything and makes a point of defying him at every opportunity. Lucifer refuses to let anyone control him whether that be God or Amenadiel and it seems that this attitude has persisted since literally the dawn of time.

Amenadiel is forced to stay on Earth longer than he wants to when his necklace is stolen and he has to find a way to get it back. Filing a police report with a uniformed Chloe doesn’t get him anywhere so working with Lucifer is his only option and this forces them to explore the animosity that exists between them It is interesting to see the beginning of things like Lucifer’s love affair with playing the piano, his appreciation of all things sordid and his general zest for life in Los Angeles but I don’t feel that there is really anything new here.

The most interesting thing that happens is that Amenadiel is tricked into making a vow to grant Lucifer one request at a moment of his choosing which results in Amenadiel having to agree to let Lucifer stay on Earth with no interference from him. Of course we as viewers know that Amenadiel did little else but interfere in the first season but this does help frame that in a new light. Amenadiel employed a lot of sneaky underhanded tactics in order to force Lucifer to return to Hell and this vow could be a reason for that. He couldn’t directly break his word but it appears that he isn’t prevented from manipulating others to achieve his goal. This gives us a possible origin for Amenadiel’s desire to find loopholes that can be exploited. 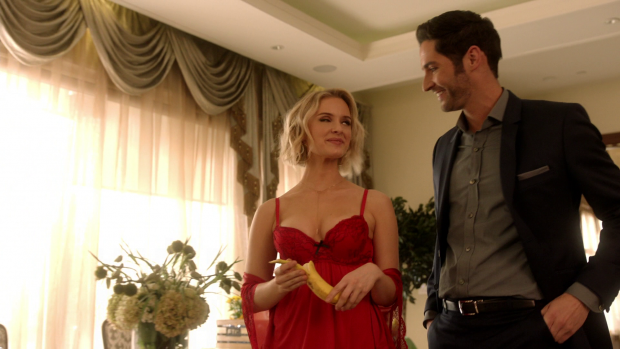 Other than that much of the episode plays out like the build-up to a big fight complete with a training montage. This montage has a twist as it’s not about the fighter training to be stronger it’s about how to appear to be weaker. Amenadiel can’t use his celestial strength in the ring because it’s too suspicious so he has to learn how to fight like a Human which provides a hilarious if pointless montage showing him learning how to hide his true strength.

Most genre shows end up going with the “Fight Club” episode eventually and now this show does it. The main difference is that this one isn’t illegal but it does qualify as an Angel Fight Club nonetheless. Lucifer and Amenadiel fighting each other had been building the entire episode due to the lack of understanding between them. Amenadiel doesn’t understand his brother and repeated examples of that is something that really irritates Lucifer. This leads to Lucifer deciding to fight him in the ring to show Amenadiel just how wrong he is.

This allows Lucifer’s defiance to take a physical form as he pummels his brother to prove how much he wants to escape God’s shadow as well as prove that Amenadiel’s bravado is unearned. Of course the question of who is stronger isn’t answered as Amenadiel decides not to fight because he feels that he’s better than Lucifer but the point about not knowing each other is well made and the angry physicality of the fight shows how hostile their relationship is at this point which could be connected to the present though that link feels tenuous. 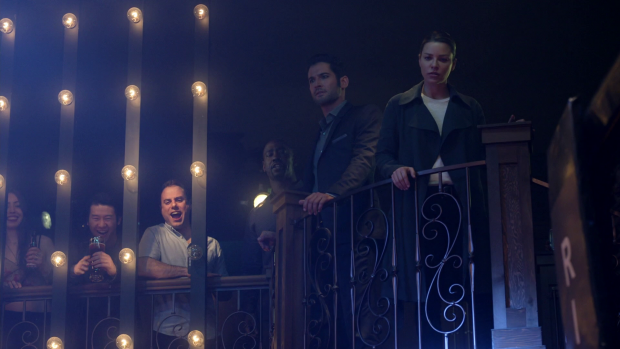 Nothing is resolved here because nothing can be resolved but it is a look at a point where their relationship was much rockier than it is now and a view of a simpler time of sorts since it’s the very beginning of Lucifer’s time on Earth. I’m not sure it’s a necessary look but it is mildly diverting.

Maze’s appearance is fun from a fan service point of view as we see her in her Hell garb and get to experience the origin of her obsession with all things sexual. None of it is required but it’s fun to see and the scene where she cuts Lucifer’s wings off is appropriately harrowing and dramatic.

Chloe is shown to be an officer in uniform -for two scenes- and still in a relationship with Dan. There’s not an awful lot to say here other than it’s clear that the Chloe/Dan relationship was never meant to last. Dan isn’t a supportive figure in her life as he spends most of this episode belittling her instincts and telling her how to do her job. It turns out that her instincts are better than his which will be shown time and time again over the course of the series. Once again this adds very little to their relationship or Chloe as a character but it is a snapshot of a “simpler time”. 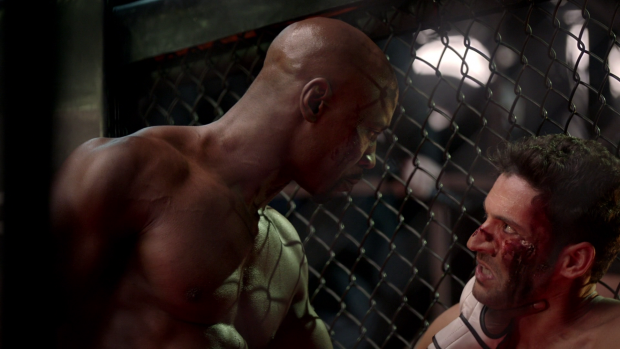 The opportunity to show Chloe as an officer rather than a detective is wasted because she changes to plain clothes very quickly and follows up the investigation on her own. It feels very familiar even if Chloe lacks some of the confidence she will later possess. The shot of her standing side by side with Lucifer when they hadn’t met yet was a nice touch but very much expected in an episode like this.

The villain of the peace being so inept that he leads Chloe right back to him while trying to keep her off his scent is hilarious as well. Not all villains can be criminal masterminds and the case itself was complicated enough to keep the heat off him for long enough. It’s one of the more memorable investigations simply because there were a lot of elements to keep it interesting. 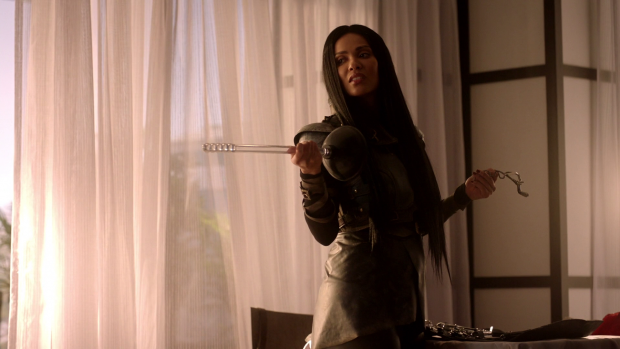 An unnecessary episode that manages to be fun in places. It’s interesting to see characters at an earlier point but the novelty wears off and the story itself isn’t that interesting. Lucifer and Amenadiel’s relationship is the strongest aspect as their scenes together show how similar their relationship is to the state it was years ago. Exploring the lack of understanding between the brothers by having them fight works well enough but none of it is any more than diverting.

Chloe in the days before she became a detective is similarly diverting yet uninteresting. The fact that she changes into plain clothes very quickly and solves the case with a little less confidence than usual ruins the potential to truly see Chloe at an earlier point. Having Dan be unsupportive of her instincts offers insight into the reasons for their relationship ultimately failing but beyond that there is nothing here we don’t already know.