Lucifer focuses on feelings and the things the characters do in order to make sense of them in order to get on with their lives. First of all I must apologise for how late this review is; extenuating circumstances prevented me from getting around to it.

This theme begins with Lucifer needing to tap into some kind of primal emotion to ignite the sword that can cut open the gates of Heaven. “Charlotte” assumes that it’s anger because when he last ignited the blade he was furious with God and was at the height of his rebellion. Naturally it’s not as simple as making Lucifer angry because there would be no opportunity to explore his current emotional state. 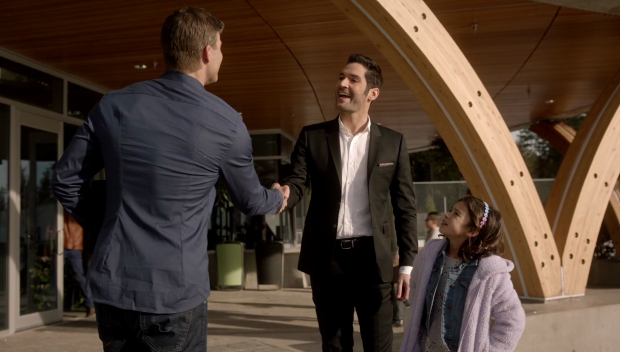 Ultimately igniting the sword isn’t about what Lucifer is feeling it’s about what he is stopping himself from feeling. “Charlotte” spends the bulk of the episode trying to force Lucifer into feeling different things. She starts with anger then moves onto arousal and finishes with fear. As far as she’s concerned these are strong emotions that could ignite the sword and forcing Lucifer to experience these emotions is what she needs to do to achieve that goal.

Lucifer’s arc throughout this episode is about understanding that feelings can’t be controlled. They have to happen one way or another or the results will be devastating. He can’t ignite the sword because he isn’t allowing what he feels to come out and the fact that this is connected to his mother and father only compounds the problem. This is all related to the fact that his father manipulated him by having Chloe created to be put in his path. His mother was complicit in this by encouraging this so that she can get closer to her goal of getting back into Heaven. Lucifer feels like a pawn in the ongoing conflict between his mother and father and this comes with a lot of pain.

Linda tells him that he can’t simply push that pain to the side because it has to be felt. It’s the key to igniting the sword which suggests that it’s triggered by a sense of honesty. I don’t expect it to ever be fully explained but it doesn’t need to be. It’s tied to Lucifer’s emotional arc so once he resolves that then he will be able to wield the sword. It’s a good example of plotting as it is entirely driven by the characters and moved forward by the things they do rather than the other way around. Many shows would drag out the search for the McGuffin and there’s rarely anything interesting about that. Lucifer focuses on what the titular character needs to do in order to actually use it which is where the tension and drama really comes from.

“Charlotte” goes about this completely the wrong way. Her biggest concern seems to be what her sons can do for her rather than the other way around. She started to realise that the universe doesn’t revolve around her last week but there’s still a long way to go before she can be truly selfless when it comes to her family. It’s clear that she cares about her family but it is still all about her and she really needs to move past that. Lucifer is able to partially ignite the sword because he allows himself to feel the pain that she is a major cause of but he probably won’t be able to fully ignite it until she accepts a measure of responsibility for Lucifer’s emotional estate and sincerely apologises for it. 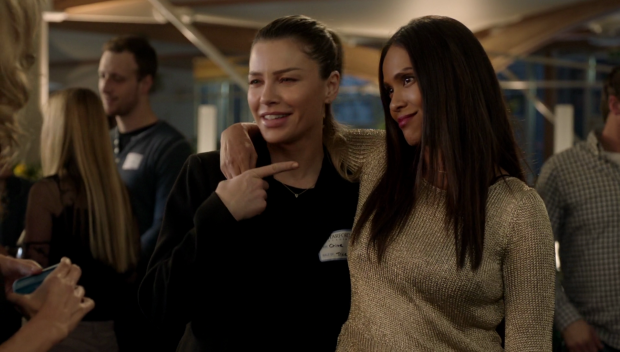 There’s a lot that goes unsaid between Lucifer and “Charlotte”. The best description for their relationship of late would be hostile. “Charlotte” is constantly impatient because she isn’t getting what she wants and Lucifer doesn’t take that well. Their relationship is basically defined by a lack of understanding. Lucifer is constantly impatient with her and “Charlotte” is incapable of understanding what she needs to do to make her children feel at ease around her. This makes their scenes somewhat uncomfortable to watch but in a good way. Resolving this lack of understanding is definitely more urgent with “Charlotte” being on borrowed time but at the same time it can’t be rushed.

Amenadiel’s role in the episode takes advantage of the basic familial connection he has with “Charlotte” and Lucifer. He tries to ignite the sword but can’t because he has his own insecurities. He resents Lucifer for being the key to getting back into Heaven. This boils down to being the brother of the favourite child and not being “important” in his mother’s eyes. He has to stand there and watch as “Charlotte” showers him with attention and continues to call him “light bringer”. Amenadiel doesn’t have a nickname like that and doesn’t have his powers. He is in a position where his mother confides in him but it’s all about Lucifer so there’s a sting to that. All of this perfectly understandable because at its core it basically amounts to a brother being jealous of favouritism happening within his family right before his eyes. He has been suppressing it as Lucifer has with his pain but his inability to ignite the sword shows that he has unresolved issues of his own. There’s also an unsubtle impotence metaphor surrounding the sword for both Lucifer and Amenadiel that isn’t explored but it is there.

The case of the week allows Chloe to work through her feelings. She doesn’t spend a lot of time working with Lucifer this week which makes sense given recent events and part of her development will be around getting to the point that she is comfortable working with him again. Amusingly the time they do work together does allow her to comment on the tropes that have commonly been associated with the cases such as Lucifer complaining about the case and projecting his personal issues onto them. Normally a show calling out the things it is persistently guilty of can show a lack of self awareness but in the case of Lucifer it actually provides something of a promise that things would be slightly different this week.

Lucifer does still project his emotions onto the case but this part of the episode isn’t actually about him. All he learns from it is that emotional control is a dead end with the major revelations relating to Chloe. She has been struggling to understand Trixie’s behaviour of late and this episode allows her to learn the cause. It’s actually a fairly simple one that makes a lot of sense. Trixie is worried about her mother because of everything she has been through lately so is pretending that everything is fine to give her one less thing to worry about. She’s a young child so is unsuccessful at hiding her emotions which creates issues as Chloe is unable to understand what’s going on with her. Their scene at the end where Chloe opens up to Trixie about how she feels and tries to reassure her is very sweet and wonderfully acted. 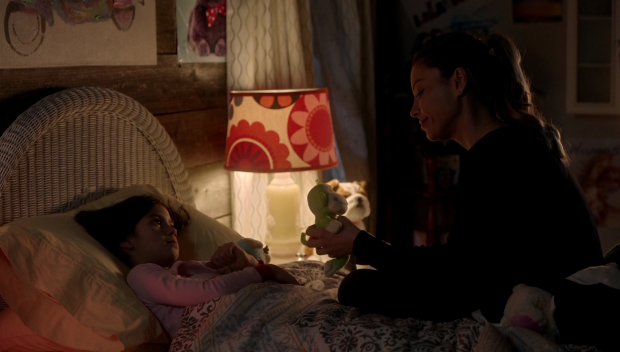 Chloe clears the air with Trixie

The highlight of the episode was the Chloe/Maze team-up. I’ve always loved the dynamic between these two characters and I always enjoy Maze. She is consistently written and I like that she is gradually becoming more compassionate without losing what makes her unique. Putting headphones in when Chloe opens up to her because she isn’t all that interested in what she has to say is a great example of that. It isn’t that she doesn’t care about Chloe because she definitely does but she just finds human angst to be really boring. Her attitude is more about taking action rather than talking about things and this extends to her approach to helping Chloe.

I loved them going undercover as a lesbian couple at the private school as it was a lot of fun to watch but also really important in helping Chloe put her insecurities in context. A good amount of the episode was spent on Chloe feeling inadequate next to the other rich and fancy mothers who enrol their children at this school. She struggles to personally measure up to them even though they’re even more messed up than she is.

This is where Maze comes in. She is able to read the crowd and tell Chloe what’s really goes on. It highlights how shallow and false the other parents are which seems to be a recurring theme for people in Los Angeles in general for this show. This is basically how Maze compliments Chloe. According to Maze, Chloe thinks that she is far better than any of the other women at the gathering and she makes this known through action rather than words.

As fun as it all was there was a bit of a disconnect between those involved in the case and the actual resolution. By the time it was resolved I had forgotten who many of the people were and the solution felt like it was a twist that the episode hadn’t really been building too. With everything else being so compelling a case that fails to be completely involving is such a small criticism but it’s the one part of the show yet to be perfected. 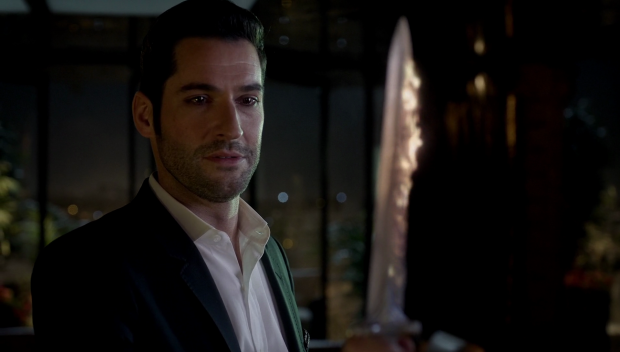 Lucifer starts the journey to self hearing

Another excellent episode that deals with the emotional health of most of the characters. Lucifer’s unwillingness to feel the pain that he is pushing aside as a result of being manipulated by his parents is the reason he can’t ignite the sword and the reason he can only partially do so because there is so much to be resolved. “Charlotte” is only focused on getting what she wants which makes the relationship a really hostile one. It’s complex because she still cares about her sons but is also only really focused on herself. Amenadiel struggles with not being the favourite child which creates issues for him as well. The family dynamic between Lucifer, “Charlotte” and Amenadiel remains really compelling.

The highlight of the episode was the Chloe/Maze team-up going undercover as a lesbian couple at a private school function. Not only does it help Chloe put her insecurities behind her but it also allows Maze to compliment her and show Chloe that she thinks she is so much better than the fancy and false parents at the private school. Having Chloe find out that Trixie is only pretending to be content so that she doesn’t give her mother something else to worry about. The scene where Chloe opens up to her is very sweet and well acted. The one place the episode falls down is in the solution to the case as I had forgotten most of the people involved. It’s a minor criticism considering how much else this show gets right.