Lucifer introduces a man who was committed because he believes himself to be God leading to an investigation of the man’s claims.

It had to happen sooner or later. Having Lucifer introduce God in some form was inevitable and this episode went in some unexpected directions with it. When he first appeared I expected the episode to keep it vague and end the episode on an inconclusive note so I was glad when it was fully leaned into and explored the possibilities. 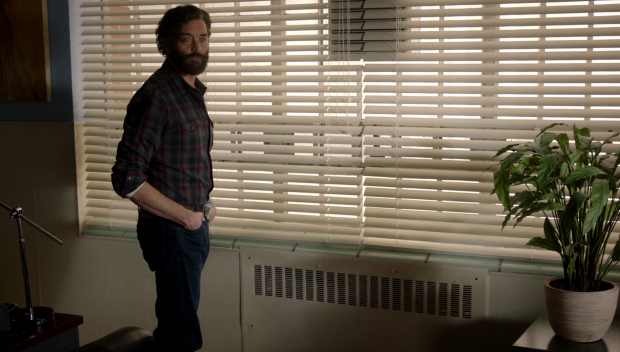 That’s not to say it was all good as the overall experience was uneven but the story built to a definitive conclusion on the man’s identity. “God” -or Earl- Johnson (Timothy Omundson) being a mental patient is an obvious yet effective way of quickly framing him as a man of questionable credibility. People can easily write him off as insane and misguided while the episode suggests that he’s the real deal. If the real God was going to hide anywhere on Earth without changing his behaviour in any way then posing as a mental patient is the way to do it.

Initially, “God’s” dialogue could easily be dismissed as metaphor or stumbling onto some choice phrases. He calls Lucifer “my child” but also refers to Linda in that way suggesting that he calls everyone that. He uses Lucifer’s real name, Samael which stops him in his tracks. It’s the only thing he says that creates any possibility in Lucifer’s mind that this strange man is the real deal. Personally it wasn’t enough for me because he could easily be a fountain of Biblical knowledge. The fact that Lucifer hadn’t introduced himself at that point could easily have been explained away as well but it’s what Lucifer’s entire assumption hinges on.

There’s a disconnect between the scenes before it seems clear that “God” is who he says he is and the scenes after mostly due to the dialogue. It goes from vague to specific which definitely doesn’t hold up if the scenes are rewatched knowing how the episode turns out. It’s almost as if the episode started life as being more of a misdirect than it turned out to be and later turned into what we have now without fixing the earlier scenes.

I really enjoyed “God” as a character. Timothy Omundson’s performance really helps to sell what the character is supposed to be. There’s a sense of humility to him that makes it almost believable but there’s a lot of uncertainty in his voice as well and that does carry through the episode. Even when he has convinced pretty much everyone it’s still there and it’s impressive how subtle it is. It’s a testament to Omundson’s performance that he is able to carry this subtlety through the episode while still making it believable that the characters might believe him. 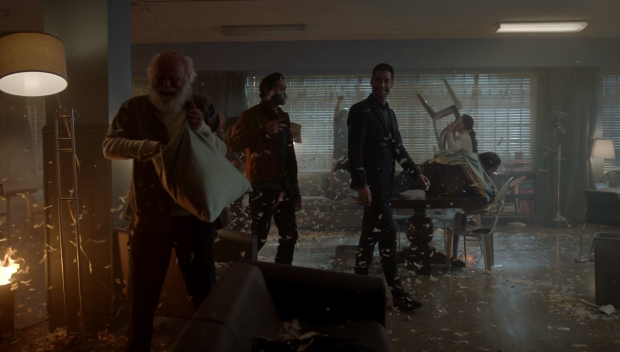 This is an important episode for Lucifer as his relationship with his father has been completely one sided since the show began. He has a lot of unresolved issues and blames his father for a lot but has never had the opportunity to articulate his feelings directly to the source of them. “God” provides him that opportunity and he really takes advantage of it. Tom Ellis does a great job of playing Lucifer both guarded and unhinged at once. He alters his mental state between being vulnerable and defensive and both are equally valid states of being considering the complex nature of dealing with his father after all this time.

Lucifer has complex feelings about his father. He wants “God” to answer for casting him out, he wants an apology and he wants his family to be a cohesive whole again. It’s great to see this play out because Tom Ells is so good at playing hurt, childish and vengeful all in the same scene. None of this would work if it weren’t for the acting and this episode definitely nails that consistently.

“God” does give Lucifer what he wants. Everything he ever wanted to hear is said and then some. Lucifer gets to hear that his father is proud of the man he’s become which comes across as overly sentimental and a little false. It sounds too good to be true and that’s because it is.

Once the truth is revealed and the restored Earl asks Lucifer about his feelings now that he’s had a chance to air them Tom Ellis really knocks it out of the park. His fury practically leaps off the screen and the reveal that he is only more angry because he is fully aware that his real father would never say the things he heard. If the real God ever shows up then it looks like he’ll be getting an earful. 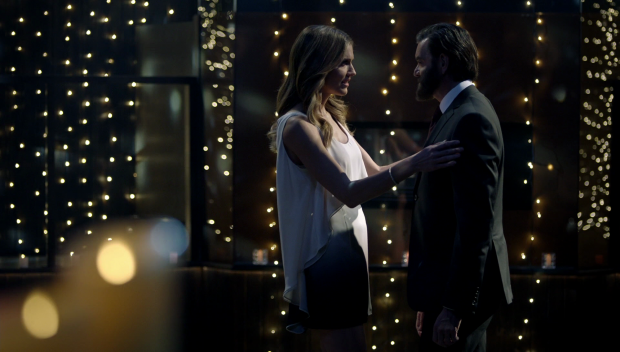 A chance to reconnect

“Charlotte” has a lot of unresolved issues in her relationship with “God” as well. Her first reaction is to kick him for locking her up in Hell and her feelings are complicated from there. Everything she has done has been focused on storming the gates of Heaven and taking her rightful place. It gets harder to follow up on that when the source of her feelings is staring her in the face and she feels more eager to give him the benefit of the doubt.

As with Lucifer, “God” says all the things that “Charlotte” wants to hear and Lucifer’s plan to do his own version of The Parent Trap is definitely working until “God” is taken back to the asylum. It’s a scene that manages to be hilarious, ludicrous and endearing all at the same time. Recreating their first date seems like a fair idea to start them down the path to settling their differences and rekindle the old flame. Tricia Helfer and Timothy Omundson play this scene with the maximum possible awkwardness and it provokes a lot of laughs for that reason. I also find the notion that Spandau Ballet were playing at the moment of the Big Bang to be really hilarious. It wasn’t meant literally of course but it’s still amusing.

Another entertaining moment was the escape from the asylum. Lucifer encouraging the patients to give into their urges and cause chaos led to a truly hilarious scene involving a slow motion walk out of the facility with Lucifer and “God” almost moving as one. It looked great and stood out as one of the most memorable things the show has ever done.

The reveal that “God” only thought the way he did because of the influence of an enchanted belt buckle was a bit of a cop out but was also a nifty way of exploring this concept without it having far reaching consequences. It means that “God” can show up for one episode and then leave without that having a massive impact. Obviously it does for “Charlotte” and Lucifer but beyond that the show will largely go back to normal. The belt buckle being a missing piece of the blade furthers that arc along though I’m hopeful it won’t descend into a McGuffin search because those are rarely interesting. 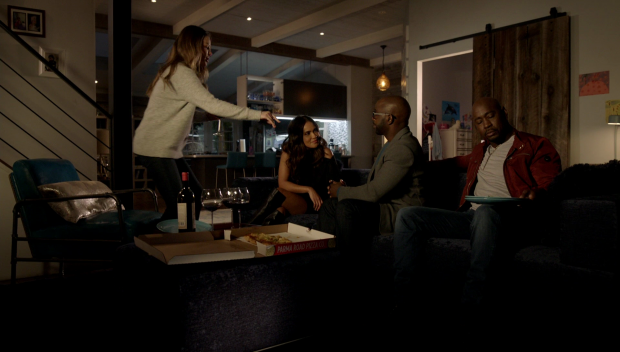 All kinds of awkward

It’s unclear how Earl will live his life now that he’s free from divine influence. I can’t imagine adjusting to that will be easy considering he changed his name and lost years of his life to it. I’m surprised how unphased by the whole thing he seems to be but I suspect this will go unaddressed. I would like to see Omundson return as the real God in a future episode as he could definitely make that work.

I like how the episode develops the Chloe and Maze dynamic. According to Chloe Maze is becoming a little too clingy and her behaviour seems to back that up since she’s always suggesting they do things together and generally being more than a little insufferable. Lucifer points out that she’s obsessive and Chloe just wants some time to herself.

This leads onto the double date portion of the episode which ties into the murder case because Chloe uses it as an opportunity to question a Doctor who expresses interest in her. Maze’s mind is on one thing for Chloe naturally and Chloe’s mind is also on one thing but it happens to be the thing she always thinks about; her job. There was a missed opportunity here as Chloe hasn’t had many meaningful interactions outside of Lucifer and Maze since the show began. She’s a character defined by her job as well as her relationships to others but rarely has any time devoted to just her as a person. Granted going on a date with a man who isn’t Lucifer or Dan isn’t the best way to fix that but it has some merit to it because it can move Chloe away from Lucifer and give her something else to deal with.

Unfortunately Chloe isn’t very well served in this episode. Her reaction to walking in on “Charlotte” and “God” kissing as Linda and Lucifer watch is completely inadequate. She shrugs it off completely which definitely isn’t something that should happen. At a minimum she should have a lot of questions because her history with “Charlotte” isn’t insignificant especially since the court drama she had to endure. It doesn’t make Chloe look good to dismiss this.

Amenadiel feeling unsatisfied with being on Earth is further developed but not by much. He talks about Earth being nothing compared to Heaven and the double date scene is meant to show that he can’t fit in with humans. It’s a great scene and shows how off the wall Amenadiel and Maze can be. A conversation with Maze reveals that he will miss her when he leaves. I find it strange how Amenadiel never gets to interact with “God”. He only hears about this mysterious stranger but surely having them interact should have been essential. 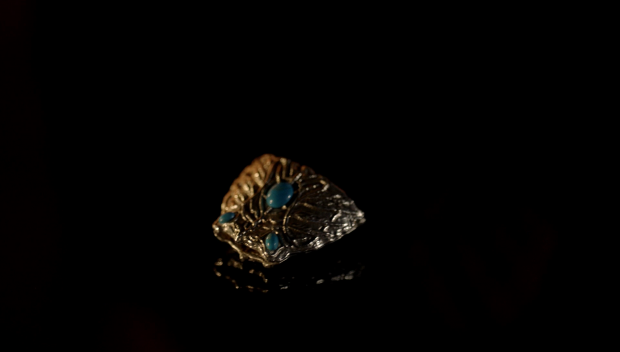 An enchanted belt buckle is the cause of all this

An uneven episode that excels in the acting department but falls short in other ways. “God” is a well acted character but the early part of the episode where it’s deliberately vague as to whether he’s the real deal clashes with later on when it is widely accepted that he is. Tom Ellis excels at playing Lucifer as hurt, childish and vengeful all at once. He gets exactly what he wants from the man he believes to be his father which makes the pay-off that he’s more furious because he knows his real father would never talk like that all the more satisfying. “Charlotte” also has a lot to deal with and her desire to reconcile works really well. The recreation of their first date is hilarious, ludicrous and endearing all at once. Sadly the episode doesn’t go into any detail around how Earl can go back to his life after it being changed so much.

The development of the Chloe and Maze partnership works well. I like that Maze is becoming too clingy and how that leads to the double date scenario that is a lot of fun but also ridiculous. Chloe on a date with a man who isn’t Lucifer or Dan isn’t necessarily a bad thing but I would like to see her defined by something other than her job or relationships. Amenadiel not enjoying Earth is slightly developed but not by much. It’s interesting to see that he will miss Maze but I am disappointed that he didn’t interact with “God”.