Lucifer embraces High School drama when the murder of the author of a Young Adult book series causes Chloe to consider lost experiences.

Writer’s block is Lucifer’s particular issue in this episode. He is still no further forward in finding a way to kill Cain and is immensely frustrated by this. The Cain problem is a very small part of the personal issues that he is experiencing surrounding the return of his wings and lack of information on what his father has planned for him. 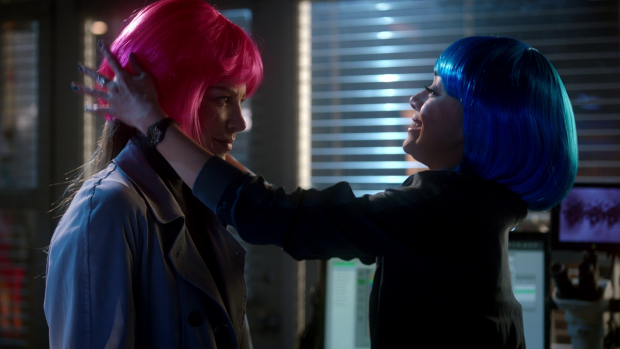 In Lucifer’s head finding a way to kill Cain is the quick fix for his problems as it will send a message to his father that he can’t be controlled which may be enough to force a confrontation of some sort. He has no idea if this will actually work but this assumption is what currently drives him. The problem is that he has no idea how to remove Cain’s curse and isn’t able to think of anything else to try.

Fortunately for him the case of the week is perfectly suited to figuring out this problem. A dead novelist who struggled to find an ending for her story allows Lucifer to explore the failure to find solutions and gives him hope that solving this case will give him the answers he needs. Looking for the quick fix and easy answer is typical Lucifer and as always the episode is more about teaching him the lesson that not all answers are easy to come by. It may seem repetitive but this show always finds creative ways to remind Lucifer of what he actually already knows.

Ultimately the novelist overcoming her writer’s block prior to her murder isn’t helpful to Lucifer because the mechanics of how the ending of her story came about are more complicated than her simply thinking of an ending so Lucifer finds no answers here. The most interesting thing about this case is that there is a role reversal between Lucifer and Chloe. Lucifer is so fixated on solving his own problem that he focuses on solving the case rather than employing his usual tactic of amusing himself while Chloe does all the work. As a character arc for Lucifer it doesn’t entirely work because his inability to generate ideas becomes more repetitive than progressive which means that it takes a long time for the revelation to kick in. More could have been done with Lucifer being more professional and responsible. 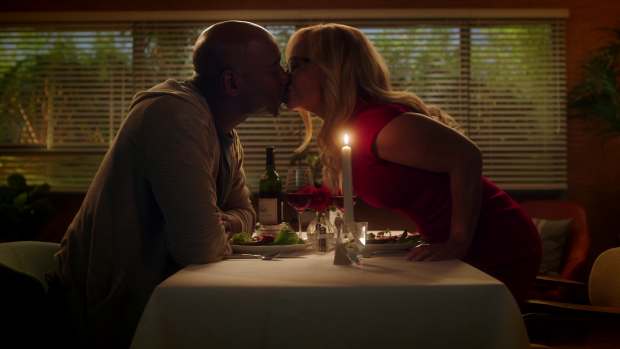 In this case it’s Chloe’s turn to get wrapped up in her own narcissism when she reads the books and becomes invested in the characters. Since they are all based on people the victim went to High School with she sees beyond the stereotypes to the people behind them and gets wrapped up in the idea of meeting them. It’s a less than subtle jab at Young Adult fiction to point out that the characters are underdeveloped and the plots are ridiculous but it works in context because it allows for exploration of Chloe’s regrets.

There is often very little insight into Chloe’s past so this is a rare opportunity to see this side of her. As a child actor she was robbed of the experience of attending High School including social milestones such as the prom so there’s a wistfulness to Chloe when it comes to the less than conventional adolescence that she had. Her upbringing clearly contributed to her more serious outlook on life and her overwhelming sense of responsibility. Becoming invested in the books and the angsty High School drama allows her to cast that aside for a moment and become wrapped up in things like gossip and love triangles.

It’s a good showcase for Lauren German who acts very unlike Chloe usually acts in this episode. She doesn’t become completely unprofessional but she’s distracted enough to become less than effective. Lucifer does what Chloe normally does because he isn’t invested in the High School reunion scenario and appears to want to be away from it as quickly as possible while remarking that it’s a popular torture method in Hell. 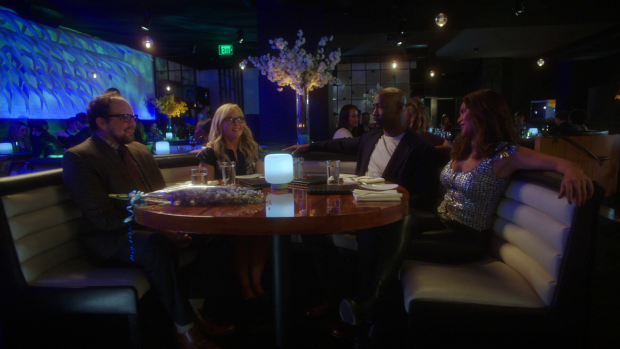 The worst double date ever

Amusingly none of the characters featured at the High School reunion feel fleshed out in any way. They are very much the shallow stereotypes that the fictional books are suggested to include. They’re the classic trope of people who never really grew out of the roles they cultivated in High School which means they were never able to move onto being responsible adults. This is a direct contrast to Chloe who is very responsible and does continue to grow and change. In many ways it shows her how her life could have ended up and once the romantic veneer of the High School hierarchy wears off she realises that she wouldn’t have her life any other way. It’s an important lesson while also allowing her to indulge in harmless fantasy for a little while.

There’s a lot of fear of the unknown in this episode starting with the dream sequence where Lucifer reveals who he really is to Chloe and she ends up dead after recoiling in terror. Lucifer has often been reluctant to share his true self with Chloe and this episode finally gives us ample justification for his refusal to do so. It amounts to him being afraid of her rejecting him once she learns the truth which would result in the loss of one of the most meaningful relationships he has ever had. The image of her plummeting to her death as he tries to save her is very striking because it shows how intense that fear is. Lucifer’s inability to open up to her seems to be clouding his mind throughout the episode and possibly forms part of the reason he is unable to solve the Cain problem. Once he starts to open up to Chloe in a really sweet scene involving her being allowed to have some version of a High School prom his mind clears and an idea presents itself. Hopefully this signals a move towards Lucifer eventually telling her the truth. 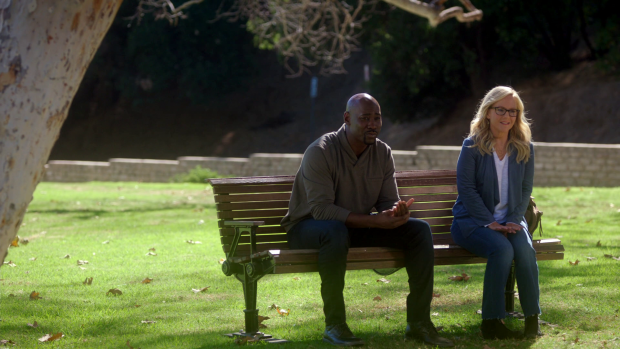 Another example of fearing the unknown is seen in the way Linda handles her relationship with Amenadiel. They break up in this episode because Linda hadn’t fully appreciated how much them being together upsets Maze so calls it off because her friendship with Maze is more important to her. This stated reason seems reasonable enough but there is the suggestion in Rachael Harris’ performance that there is more to it than that. There’s a certain irony to a psychiatrist being unable to process her own feelings and that certainly comes across here. It appears that she breaks up with Amenadiel because she is concerned about how close they are getting and is afraid of what that means considering his celestial origins. It’s a valid fear and will have to be addressed at some point in the future but for now it comes across as avoiding the larger issue which makes sense for a relationship that she was unprepared fore. Their scenes together show that they are well matched with clear affection and comfort between them so it’s unlikely to be the end point of this relationship.

Maze behaves in a way that can be best described as juvenile when it comes to dealing with Linda and Amenadiel sneaking around behind her back. This makes sense because Maze has never been in a position to process these emotions before so has no idea how to deal with them. Before Linda she had never experienced friendship and it’s clear that she has come to care for Amenadiel so their betrayal of her request stings a lot. She reacts violently to this and resorts to torturing them because it’s the thing she knows best. It takes the form of psychological torture when she arranges a painfully awkward double date scenario designed to get a reaction out of Linda and force her to admit the truth. It’s a difficult scene to watch in a good way. Having her hang all over Amenadiel as Linda struggles to keep her composure is really well done and the eventual pay off with the admission of the truth feels appropriate. Maze opens up to them and becomes more vulnerable than we’ve seen lately. She is often such a fun loving character that it’s easy to forget that she has a sensitive side because she rarely presents it. Linda’s reaction to this vulnerability does let it hit home just how deeply her actions have hurt her best friend though it has certainly been on her mind giving how terrible she is at covering it up.

Interestingly Linda’s justification for allowing herself to be happy is very revealing as well. She points out that all she does is listen to Maze’ problems as well as the problems of everyone else she encounters whether they be friends or strangers and it’s difficult for her to carve out a life for herself. This is why she wanted to give a relationship with Amenadiel a try because it’s one thing in her life that belongs to her and frees her from the associated stress of listening to the problems of others. The burden of that is clearly significant and addressing that delivers important insight into her character. Amenadiel’s thoughts on the matter aren’t represented as heavily as they could be but it almost feels like he’s the object in this scenario rather than a character in his own right which works from the point of view of Maze and Linda but is limiting for Amenadiel’s development. 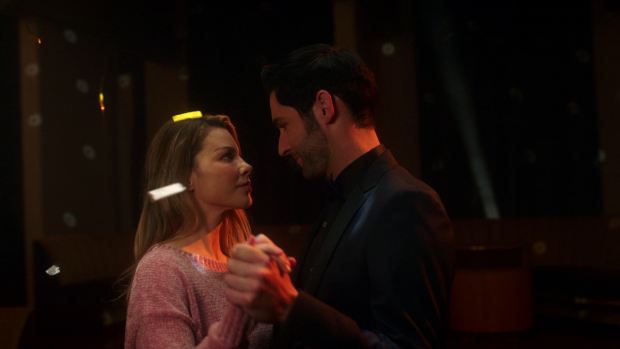 Chloe has her prom

A strong episode that offers important insight into Chloe’s character through her past regrets. the role reversal involving her and Lucifer works really well and it’s refreshing to see a lighter side of Chloe as she becomes invested in the High School angst that she was deprived of in her own adolescence. Showing the characters in the High School reunion scenes as being shallow and underdeveloped was a nice touch as it helps Chloe realise how important it is to grow and change because she experiences the alternative. Lucifer taking on a more responsible role while being fixated on the mental block he’s facing in regards to Cain isn’t played to full effect but is still fun to watch.

The Linda/Maze/Amenadiel situation works really well because it allows deeper insight into Linda as a character when she opens up about the frustrations that come with listening to the problems of others. Maze is allowed to be more vulnerable than usual after a painfully awkward double date designed as a way to torture Linda and Amenadiel into admitting the truth. It all works brilliantly because different sides to these two characters are shown and the relationships on display become more meaningful as a result.