Lucifer spends some time setting up future plots for the rest of the season while dialling back the intensity and family drama.

So far, Lucifer has been on a high this season. The introduction of Tricia Helfer’s Charlotte has been a great thing for the show. It has definitely excelled in delivering on the dysfunctional family aspect in ways that feel somewhat unique – on a visual level at least. 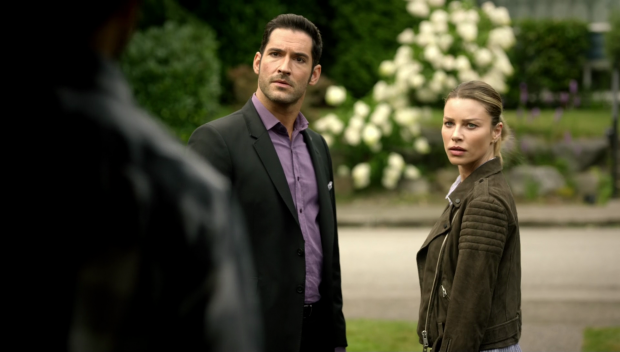 On the job again

Up until now it has been all about Charlotte. She was barely in the first episode but it was still about her and she has been the focus ever since. As good as she is there would be a risk of getting sick of her if she was overused so this episode wisely dials back her influence but does it replace it with anything worthwhile?

The answer to that question is a complicated one. This episode does really well with some things and falls completely flat in others. In theory the idea of developing the female character on the show is a great one because -with the exception of Chloe- they tend to sit in the background until they are needed. Giving them a plot all to themselves without Lucifer being directly involved has a lot of potential and we are at least given the scenario.

Chloe’s life is spinning out of control at this point. She is about to go through a divorce and become a single mother which for her is an acknowledgement of a situation that has really been going on for a while. Dan is someone that she can’t really trust and she was being held back by the belief that she might one day be able to. Accepting this reality isn’t easy and she goes on the usual self destructive path involving denial and throwing herself into her work.

It’s not a healthy way to go about things and Lucifer sees through this right away. He decides that she needs to have some fun and enlists Maze to socialise with her so that she might loosen up. Ever since the show began I have never been able to imagine Chloe as someone who is able to loosen up. She may crack a smile or the occasional joke but she is broadly a joyless human being. The reason for this is her crumbling marriage and the fact that she just can’t lift herself out of work. She solves murders for a living and that has to be difficult for anyone. Her thick skin is part of the problem and this episode does some work to try and bring her out of her shell a bit. 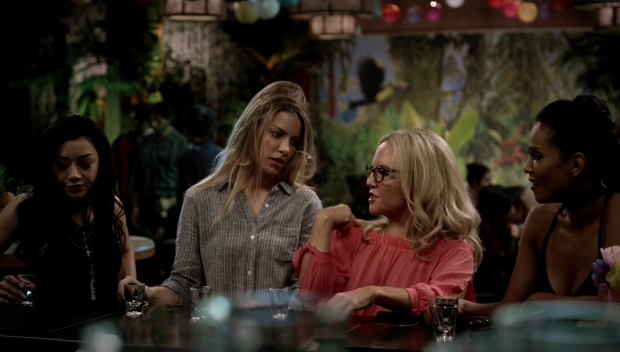 Maze is the perfect choice to do this. They don’t like each other very much and Maze’s brutal honesty is something that Chloe can at least respect. When Maze wants to spend time with her Chloe feels that she’s genuine about it because she tells it like it is any other time. It isn’t until later that she finds out that Lucifer put her up to it and she feels a little betrayed by this.

Lauren German does a great job in this episode playing the different facets of Chloe. She seems genuinely stressed out and then the more relaxed side of Chloe comes across perfectly. It isn’t often that she gets to play different sides of Chloe but she is definitely up to the challenge.

It is established in this episode that Chloe doesn’t have any friends outside of Dan and Lucifer and she is at a point in her life where she needs some. Since this is a TV show and we’re somewhat limited to the main cast this means that a “girls night out” can only really involve the other female leads on the show. Chloe’s night out with Maze, Linda and Ella is a lot of fun. There is a lot of natural chemistry between the actresses. It doesn’t quite pass Bechdel Test as a drunken Chloe brings up Lucifer but aside from that a good dynamic begins to form and it brings some life to these characters.

Ella in particular has been characterised as the quirky forensics person who delivers key information about a given case along with some witty banter with Lucifer. We have had hints of her religious beliefs and how unconventional they are but so far the show hasn’t made a big deal of it. This episode lets us see her outside of work and in a situation where more of her personality gets to shine through. It’s good to see and it continues to build her as a fascinating character. 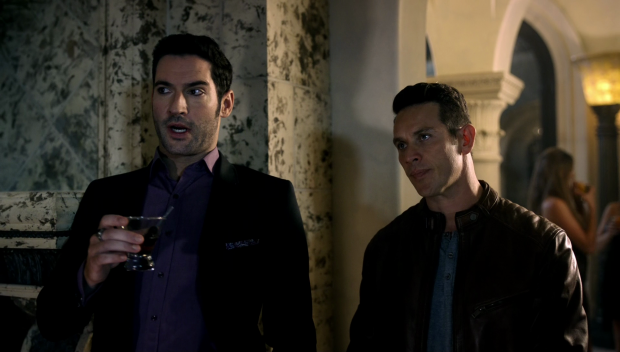 It turns out to be a good thing for Chloe who ends up enjoying herself and agreeing to live with Maze who also likes being around her daughter. It’s a solid foundation for her to build on and seeing her interact with Maze in a living situation could probable be a sitcom all of its own.

The problem that this episode has is the “girls night out” is cut very short when Chloe has to have her mind back on the job. It quickly comes back to the case of the week which is a shame as I would be willing to watch more scenes of the girls just enjoying themselves. Character development for its own sake is rare on this show so it would have been most welcome.

As always the case of the week was really forgettable and only really existed to establish that Lucifer is messing around to divert his attention from more important matters. It does lead to a fun team-up involving Lucifer, Amenadiel and Dan but it doesn’t last very long and a lot of the potential goes unfulfilled. The case also commits the crime of wasting Robert Picardo’s talents on a really small role. As a Star Trek fan there was no way I couldn’t mention his presence. 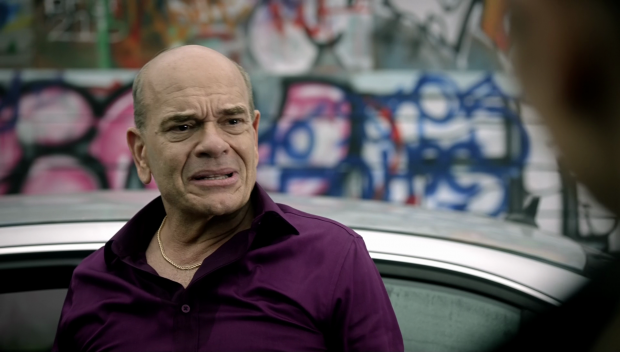 Please state the nature of the medical emergency!

Amenadiel is still struggling with the loss of his powers and confides in Linda using metaphor that naturally makes her think of sexual performance. She advises him to relax which leads to him drinking a lot and -like Lucifer- deflecting his attention from dealing with the problem.

There is a hint dropped at the possible cause of Amenadiel losing his Angel powers. The deal Lucifer made to be sent back to Earth so that he could save Chloe is discussed. He promised God that he would return his mother to Hell but hasn’t lived up to his end of the deal. It could be that God is removing Amenadiel’s powers so that he can’t help Lucifer and Charlotte. It also ends the episode on a sinister note when Chloe is involved in a car accident which implies that God is taking back her soul as punishment for Lucifer not delivering on his promises.

I imagine that this will turn out to be an overreaction next week and will be dismissed as a near miss but the looming threat of God’s retaliation forcing Lucifer to choose between selling out his mother and Chloe being killed to teach him a lesson has some really interesting possibilities.

There’s a lot of comedy in this episode and for the most part it lands really well. The drunken girls night out largely speaks for itself but we also get the repeated gag about Dan looking so much like a cop and Amenadiel’s truly bad dancing. The cast are good at bringing the laughs and this episode is one of the best example of that the show has had to date. 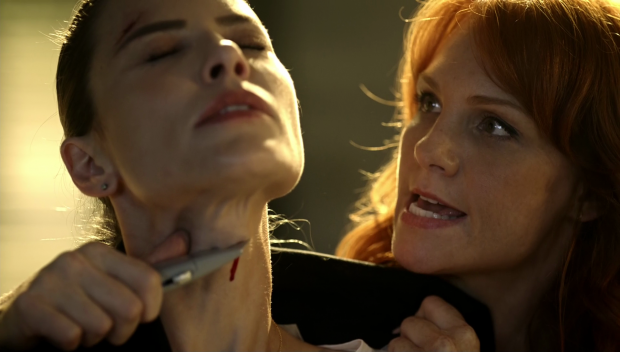 Just another day at the office

A promising episode that doesn’t quite live up to its potential. Allowing Chloe to develop as a character and have some fun with the other female members of the cast works in theory but in practice its cut short in service of the case of the week. Despite that, the dynamic between Chloe, Ella, Linda and Maze is fun to watch. Lucifer’s team-up with Amenadiel and Dan is also fun but even more short lived. The suggestion that God is going to take Chloe’s life as punishment for Lucifer not returning his mother to Hell is promising and I look forward to seeing how it plays out.