Lucifer returns again after a random one week hiatus immediately following the season premier that ended on the cliffhanger of Lucifer’s mother showing up in distress.

Casting Tricia Helfer as Lucifer’s mother is a bizarre choice that entirely makes sense for this show. Having her play off Tom Ellis with a mother/son dynamic immediately looks strange as Tricia Helfer obviously could never be his mother. Tricia Helfer is around 4 years older than Tom Ellis so it’s completely impossible. 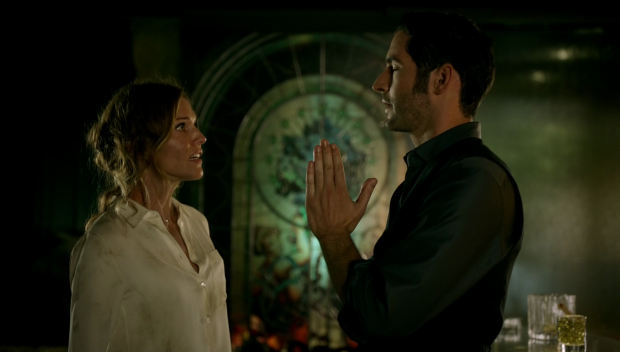 Of course, in a show like this it doesn’t matter because we are talking about ageless beings that have been around since before the dawn of time so physical appearance doesn’t make an awful lot of difference in the grand scheme of things. Lucifer’s mother possesses a human being so that writes off any inconsistencies in age immediately.

Despite that, it’s still very strange to look at. Watching two actors who are pretty much the same age acting out that kind of relationship is uncanny and the episode completely runs with that by taking it seriously and embracing the bizarre nature of it all. In some ways it really encapsulates what I like about this show and I’m so invested in the world that it has created that I’m more than willing to just go with it.

It wouldn’t work if the actors were unable to sell it but thankfully that isn’t a problem. Tricia Helfer and Tom Ellis have really good chemistry in this mother/daughter relationship. If you closed your eyes then the age difference wouldn’t be a factor at all.

Naturally it’s a dysfunctional relationship and the fact that they are so close in physical age is a big part of that. Under normal circumstances Lucifer would find the body being possessed very attractive so that clearly causes him distress and the fact that his mother constantly goes on about how attractive her vessel is definitely doesn’t help. There’s some good awkward comedy when she dresses in Maze’s clothes because they are the only thing available and it makes Lucifer feel very uncomfortable. If he didn’t need therapy before then he certainly does now. 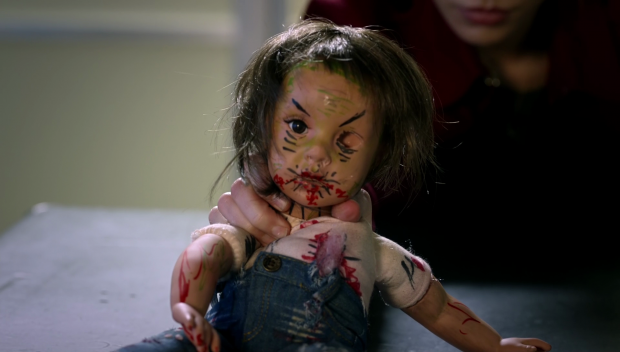 Playing up the embarrassing mother angle was a nice touch and makes this lunacy easier to digest. Being embarrassed by parents is something that is easy to relate to and this is amplified by the lack of a physical age difference.

Lucifer has a lot of issues where his mother is concerned and it’s interesting to see him start to tackle them. He had convinced himself that he hated her and that was easy to do when he knew that she was locked up in Hell but now that she is free and in his life it’s very difficult for him to continue to convince himself that he hates her. We see genuine concern from him when he sees that she’s hurt but it quickly reverts to frustrated sarcasm when that part is resolved. It’s a turbulent dynamic and it definitely makes the relationship feel more real which is important in a show about the Devil.

Another interesting thing the episode does is subvert what has already been established about Lucifer’s mother. Up until now we’ve only had Lucifer’s perspective on her and their relationship -Amenadiel’s reaction to her is there too but to a much smaller degree- so our perspective as a viewer has been somewhat limited. This episode fleshes her out in ways that are counter to what Lucifer has previously said about her. This is obviously expected but welcome nonetheless.

One thing that is established about Lucifer’s mother –will she ever get another name or do we use Charlotte since that is the name of her vessel?- is that she does care about her children. She shows a lot of affection for Lucifer and seems to want to prove to him that she cares about him. When Amenadiel’s name is mentioned she is visibly excited by the prospect of seeing him so she ticks a lot of the maternal boxes. She even makes her son “cheesy noodles” in an attempt to try to cheer him up based on her limited knowledge of human behaviour. 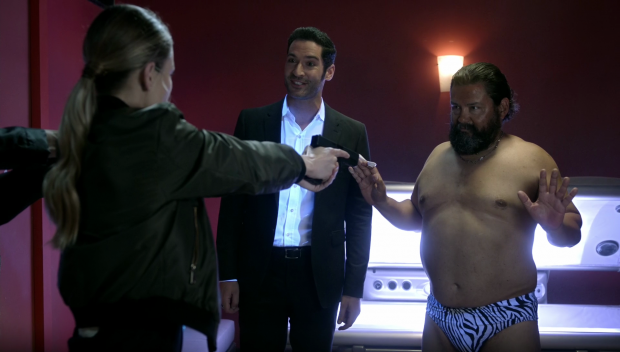 Lucifer throws himself into the investigation

In an expected twist, it would seem that she has been misrepresented by God and wants to have a chance to tell her side of the story. Of course we see shades of ulterior motives but the truth of the situation is far different to what we have been told. Nothing about this is surprising but it is ground that the show has to cover in order to create effective drama.

There are hints of a rivalry for Lucifer’s affection between her and God as well. The grin she directs to the heavens at the end of the episode suggests that she is gloating at Lucifer’s positive response to her.

Tricia Helfer’s performance in this episode is excellent. She comes across as completely inhuman which makes sense considering this is her first time being around them. Lucifer understands humanity but draws his own conclusions to comic effect where his mother doesn’t understand them at all. Her observations are naïve and this is played for laughs.

The theme of motherhood is visible throughout. Chloe is having some trouble with Trixie who has mutilated one of her dolls in an attempt to force Chloe to buy her a new one. Chloe is using this to teach her daughter a lesson about manipulation and how it isn’t a valid way to get what you want in life. 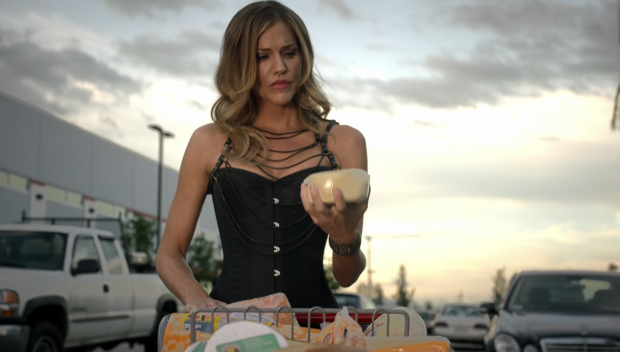 It’s a solid parenting technique and Chloe goes about it in a rational way but Lucifer has a different way of looking at things. He accuses Chloe of being a bad mother for not giving into her daughter’s demands as he associates her parenting with a lack of attention and likens it to his relationship with his own mother. This is a blindspot that Lucifer has when it comes to the way things are with his own mother and he interprets Chloe’s actions as being cruel when they aren’t.

Chloe accuses him of projecting which he definitely is and the episode cleverly doesn’t labour the point too heavily. She is willing to talk when Lucifer is ready to open up and the whole thing is left at that. Lucifer gaining a mother’s perspective from Chloe will likely be important in helping enhance his relationship with his own mother. At the very least it’ll help him understand how she thinks.

Motherhood also comes into play during the case of the week as it turns out that Charlotte has a family of her own. How that will play out now that she is possessed by Lucifer’s mother is unclear at this point and the episode does nothing to hint at how this might play out but it is a factor and an important one.

If the show doesn’t play on the fact that Charlotte has a life that is impacted by the fact that she is possessed then it will definitely be missing a trick and ignoring something fundamental. So far it is mentioned but not dealt with though it seems that Charlotte’s life will be a factor in the coming episodes. 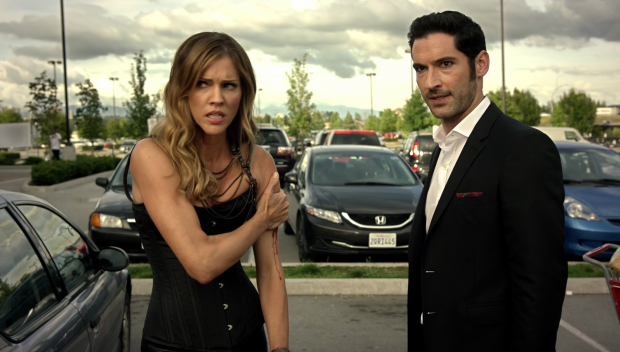 The day is saved!

Having the case of the week be around the murder of Charlotte was a nice touch as it ties the case more closely to the real meat of the episode than usual. There are complications because Lucifer’s mother has to pretend to be Charlotte who is no longer dead as far as anyone else is concerned and she also has to pretend that she doesn’t know Lucifer for Chloe’s benefit.

Despite the close ties to Lucifer’s relationship with his mother the case still wasn’t that interesting. Most of it was the standard procedural stuff that the show consistently fails to make compelling but the background of the relationship between mother and son did add some layers to it.

I found it interesting that Lucifer chose to keep the fact that “Charlotte” was actually his mother a secret from Chloe. He mentions that it’d be something she won’t be able to accept which definitely makes sense given the lack of a significant age difference. There are also wider implications such as his mother learning that he is vulnerable around Chloe as well as the hint of something sinister when she notices that her son cares for a human. Clearly Lucifer has Chloe’s protection in mind and there’s a suggestion that his mother may exploit his compassion at some point.

Amenadiel being absent when his mother reappears turns out to be important in developing the idea of his failing Angel powers. We see that he is obsessed with researching this before his wings completely disintegrate. It’s a distressing image and D.B. Woodside plays the quiet desperation really well. Having him apologise for exploiting Linda to achieve his own goals was a nice touch as it further develops Amenadiel’s vulnerability. Linda giving him a hard time over his unethical behaviour only compounds the problem. It seems that one of the mission statements of this season is to make Linda a worthwhile presence in the show and so far it seems to be working. 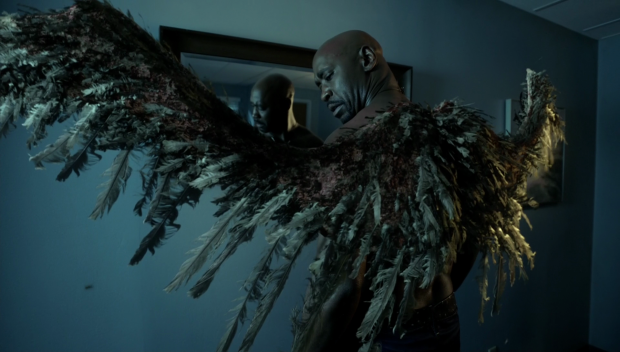 An interesting episode that creates a fascinating dynamic between Lucifer and his mother. Having their physical age be so close adds to the dysfunction of their relationship and creates some comedic moments as Lucifer comes to terms with his mother being around. Tricia Helfer delivers a great performance and has excellent chemistry with Tom Ells. Helfer gives Lucifer’s mother a lot of depth and it’s clear that there’s more going on than we see her.

The case of the week does attempt to tie into Lucifer’s relationship with his mother but it still fails to be compelling. There are interesting wider implications of her vessel being someone with a family of her own and her potential reaction to Lucifer caring for a human being but the mechanics of the case itself were uninteresting. The reveal that Amenadiel’s wings are disintegrating was appropriately distressing and it’s good that the show is finding a solid use for Linda at last.