The middle story in the 3 part Lucifer arc deals with the mysterious poison seen at the end of the previous episode while Lucifer and Chloe try to figure out their changed relationship in their own way.

It feels strange to call this the middle story in a three part arc because it really doesn’t feel that way. As I mentioned last week I don’t see this as a criticism because the episodes themselves work as stand-alone stories with connective elements. The arc that is being described has everything to do with the virus and arguably the characterisation though that carries through multiple episodes anyway. 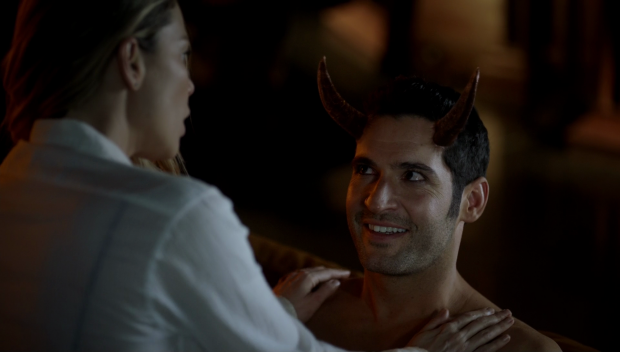 The poison story is actually a fairly compelling one as it was teased last week with the mysterious shadowy figure wearing a hat along with what it is capable of and the destructive power of it is clearly seen in this episode. It’s a slick example of a threat introduced and then developed organically.

Another thing I mentioned last week is that cases are more interesting when they connect to the characters in profound ways. Last week had the case be about Lucifer until the very end and it made the usual procedural machinations feel more worthwhile as a result. This episode proves that there is another way to make the case compelling and that involves having a compelling villain.

Dr. Jason Carlisle (Tim DeKay) is a great antagonist. DeKay plays Carlisle wonderfully and creates a truly chilling character who is captivating with his lack of morality. The episode makes a smart choice by not leaving the reveal of his identity until the last minute since the audience would probably work it out early on anyway. This give the villain more room to be developed in ways that we haven’t really seen before. The combination between acting and writing really helps bring this character to life and he’s an absolute joy to watch.

His calm and deliberate manner is the most chilling thing about him. I really liked the way he would go on about the illusion of choice and how that drives him to do what he does. Nothing he says has any merit to it and it’s impossible to be sympathetic towards the character which makes him unashamedly a villain but it stops just short of Saturday morning cartoon levels of villainy. It’s clear that he has an agenda and is very committed to his beliefs but there is no morality backing up those beliefs so he is about as close to pure evil as this show could probably get. The whole idea of choice is an interesting one because Lucifer has always told people that they have a choice in all cases and those choices might not lead them to the best outcomes but they are still choices. Dr. Carlisle doesn’t seem to understand that and the episode makes a point of showing how unstable he is. 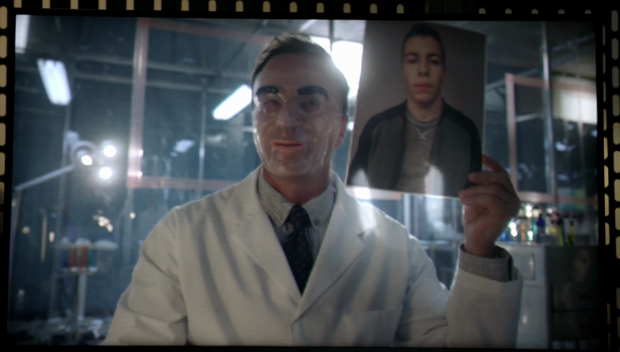 It’s a shame that he is pretty much a one episode villain but the detached way he slits his own throat is a perfect exit for him. That choice shows how disillusioned he is with everything in the world and doesn’t feel any sense of self preservation. It also sort of allows him to win since he is the only one who knows how to solve this problem.

Generally I think it’s better to get rid of an engaging villain while they’re still engaging rather than keeping them around past the point that they overstay their welcome. I don’t think one more episode would have made this happen to Dr. Carlisle but it’s also possible that something even better is in mind for next week.

While Dr. Carlisle’s plan rages on Lucifer and Chloe are struggling to deal with the shift in their relationship. I was concerned at the beginning of the episode when Lucifer and Chloe’s passionate encounter turned out to be a dream because I initially assumed that the kiss itself was a dream and we were going to continue to be teased for a while yet. Thankfully the kiss still happened and the dream was Chloe’s way of processing that. It’s a clever way to do this as Chloe is normally so guarded so it makes sense that her subconscious would try to resolve her passionate urges in this way. They are directed at Lucifer because she finds herself drawn to him at this point and it gives her something to think about.

This causes her to move a little outside of her comfort zone when she takes Maze’s advice about being more spontaneous so does things like slapping Lucifer on the backside and inviting him for a passionate encounter in the library. It all seems odd because we know Chloe would never act that way and it’s a solid source of comedy throughout the episode. Tom Ellis’ glances when Chloe acts strangely are more than enough to sell this. As a comedy double act they work well together and this episode manages to make Chloe acting out of character not seem out of character. 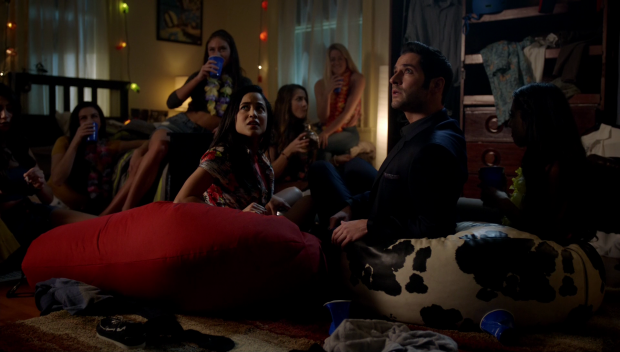 Lucifer’s handles this the same way he handles everything; by going to Linda for a therapy session and talking through his feelings with his own unique brand of arrogance. At first he assumes that Chloe has fallen under the same spell that all women do which causes him to test that theory and he projects his own uncertainty onto her by forgetting about his own insecurities. It’s interesting to see Lucifer wanting to take things slowly considering we spent an entire episode last week seeing a fraction of his promiscuous nature.

This plays out in really fun ways during the investigation. When Chloe sees Lucifer heading upstairs with a college girl she assumes that Lucifer is back to his old tricks but the subversion comes when she finds out that he’s engaging in girl talk to help resolve his feelings for her. It’s a fun reversal and shows just how committed Lucifer is to proving himself worthy of her. It looks like their relationship has developed to the point where they can at least attempt to be a couple.

Despite the entertaining scenes and compelling vision I felt that the investigation took a really long time to get going. I’m really glad that it went somewhere interesting but the plot was really spinning its wheels early on.

Outside of the main plot,, “Charlotte” is still working on manipulating Lucifer behind the scenes. She wants to tell him about the divine intervention that caused Chloe’s existence but doesn’t want to be the one to tell him so tries to get Linda to do it. Her professional ethics mean that she won’t and it’s always great to see her tell the mother of all creation where to go. That really takes courage and Linda clearly has it in spades though I wonder if that will have consequences. 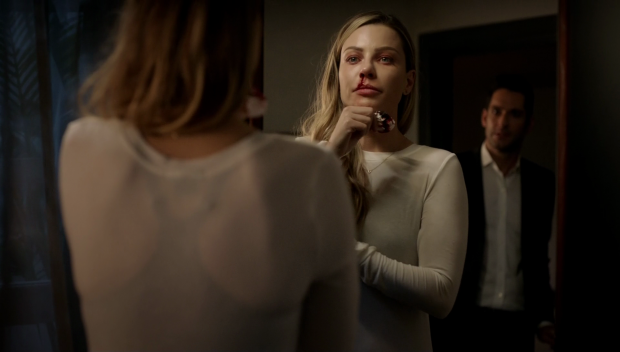 Her next move is to tell Maze who will never be able to keep her mouth shut. The beauty of it is that Maze thinks she’s doing Lucifer a favour by telling him the truth but she is actually playing right into “Charlotte’s” hands and helping her put a roadblock in Lucifer’s way by making him doubt Chloe. It’s a really clever and slow burn kind of manipulation that is playing out quickly enough to keep it from becoming stale but gradually enough to prevent it from feeling rushed.

The reveal comes at the perfect point dramatically speaking as it is when Lucifer is at his happiest so has the furthest to fall. It hits him about as hard as you might expect and his first reaction is to assume that Chloe has been manipulating him all this time while not realising that it is his mother pulling the strings. I loved the way the reveal was done with flashes of memories that Lucifer has of Chloe seeming tainted by an extra agenda. It’s all from his point of view so it makes sense that he would see it this way. The confrontation is short lived when we see that Chloe has been poisoned. Considering this is at least the third time we’ve has an attempt on Chloe’s life close an episode this season I imagine it will be resolved quite quickly.

Another excellent episode with a great villain and compelling character moments. Instead of having the case be a personal one for the characters an engaging villain is enough to build investment in the scenario. It would have been better if the investigation had moved a little quicker but I liked where it built to. Dr. Carlisle is a really compellingly detached villain who rejects the notion of choice. It’s a shame that he’s dispatched so early but it could be a good thing that villains don’t become overused.

Chloe and Lucifer’s relationship is changing in fundamental ways and having this play out with Chloe having passionate dreams while Lucifer tries to prove that he can take things slowly works really well. Seeing Chloe act out of character without it feeling out of character was a nice touch as well. Having Lucifer find out about the divine intervention that caused Chloe’s existence and seeing how “Charlotte” manipulates everything puts up a strategic roadblock that puts the relationship on shaky ground already. Of course this will all be for naught if she dies but I don’t see that happening.