Lucifer digs up an unused season 2 episode and gives Maze some well deserved time in the spotlight to focus on her new life as a Bounty Hunter.

Maze is a great character and has been sorely missed in the first two episodes of the season. Interestingly this episode is one of the four produced but never aired season 2 episodes that are being woven into the current run. The producers have said that the stories are both stand-alone and off format. This episode definitely ticks both boxes but is it any good and does it fit in with the current season? 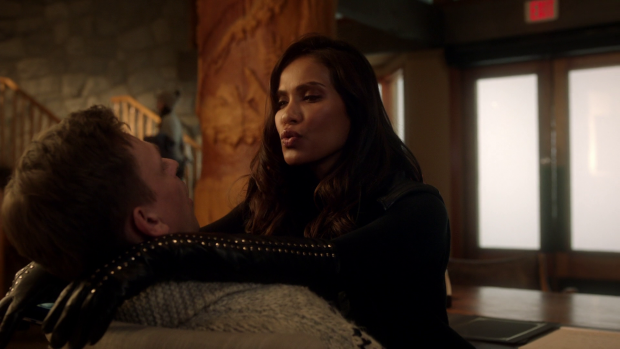 Remarkably the first two episodes of this season have spent enough time making reference to Maze being off Bounty Hunting that this episode is a fairly natural fit as it makes it look like a deliberate choice rather than something that has been forced upon the production team thanks to a reduced episode order. We are also offered an explanation for why Maze has been through something of an existential crisis lately. Apparently her Demonic party girl lifestyle is no longer enough for her. More excess isn’t working for her so she decides to look for a challenge. Bounty Hunting provides that to a point until it starts feeling a little too easy for her until she hears about the elusive Ben Rivers (Chris McKenna) who promises the exact challenge that she’s looking for.

Ben is a really good character who accomplishes the relative impossible; being a match for Maze. The scene where they meet and he distracts her enough to escape her handcuffs and use them on her sets this up and the episode never falters from there in making him a great foil for her. It also majorly helps that Chris McKenna and Lesley-Ann Brandt have excellent chemistry. This is especially noteworthy as it appears that Lesley-Ann Brandt has great chemistry with pretty much everyone so it’s good that this important component exists between these characters and ends up being the most memorable.

In essence, Ben is very similar to Lucifer. He’s a lot less debaucherous but definitely comes across as morally ambiguous, at least at first. This allows the other characters to have something to do as they are able to react to Maze’s encounter with another potential bad influence who could undo a lot of the growth she has achieved while distancing herself from him.

One thing the episode doesn’t do enough of is explore the connection between Maze and Ben and fully explore Ben as a character.. There’s plenty of it but it feels somewhat superficial all told. The reason that Maze would like him are firmly established but something about their interactions feels somewhat unfinished. Fair enough he’s an enabler for her arc but the character had enough mystique to warrant some more development. 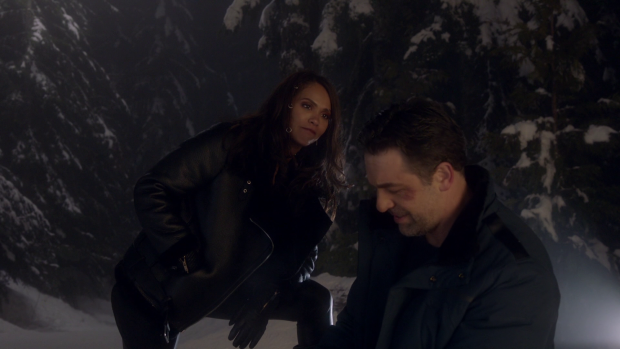 Maze meets her match…sort of

The episode was also somewhat weak in the overall plot involving the accusations lobbied against Ben. The real villain was easy to figure out though they almost always are but the reasoning behind it didn’t really work. It’s largely incidental and doesn’t take away from the more interesting meat of the episode but it does definitely stand out as being weak especially when compared to the rest of the excellence.

Strangely there are more similarities between Lucifer and Ben than the episode is willing to explore. This isn’t Lucifer’s story but the comparison is glaring. The approach may be slightly different but the end result is the same. Lucifer uses his Devil powers to get people to confess where Ben uses his natural charisma to latch onto what others are prepared to believe and exploits that. It’s a variation on a theme and it would have been fun to explore that in some way.

Of course this is Maze’s story and we almost get a glimpse into the Maze spin-off that we will unfortunately likely never get. A TV show starring Maze as a globe trotting Bounty Hunter getting into all sorts of sexy situations would be a lot of fun but if that never happens then that episode is a good fantasy to enjoy for a little while.

Maze’s arc last season involved her finding her own identity independent of Lucifer. Spending time with Trixie, Linda and Chloe helped her to do this along with periodic influence from Dan. Much of this was about establishing that the character was capable of having a life outside of Lucifer and Lesley-Ann Brandt’s engaging screen presence helped solidify Maze as a character with potential. Her arc in this episode is about finding her own identity and the interesting thing is that she’s a character who isn’t afraid to try new things. In the end she concludes that her place is back in Los Angeles with the makeshift family she has built for herself and she is content to continue living that life which is good for the show as she gets to stick around while still managing to have an off-format adventure that is so wonderfully diverting. 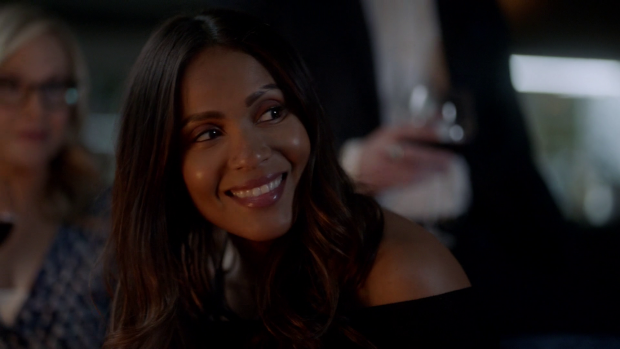 Maze finds where she belongs

I could talk at length about all of the elements that make this such a great episode but if you’re reading this then you’ve already seen this and don’t need me to list them for you. It’s a great episode for Maze that challenges her assumptions and completes her arc where is looking to find her place in the world. As good as seeing Maze doing her own stories hunting down people for various reasons would be it’s far more valuable to have her in this show. The character of Ben is a really good match for Maze and the two actors have such excellent chemistry that it’s a joy to watch them together.

The episode misses some opportunities such as the obvious comparison between Ben and Lucifer that goes unexplored. Another problem is that Maze and Ben aren’t explored to their logical conclusion which makes me wonder if there’s a lot more to this relationship. The most glaring issue is the reveal of the real villain which is obvious as usual and doesn’t quite stack up but none of this detracts from the sheer entertainment value.