Lucifer dusts off another unused season 2 episode and breaks with the normal format to explore how an obsessed reporter sees Lucifer.

The episode opens with an unfamiliar character named Reese (Patrick Fabian) regaining consciousness after some kind of brush with death and choosing to see this as a second chance to get his life back on track. His first act is to attempt reconciliation with his wife who happens to be in the throes of passion with none other than Lucifer at that very moment. 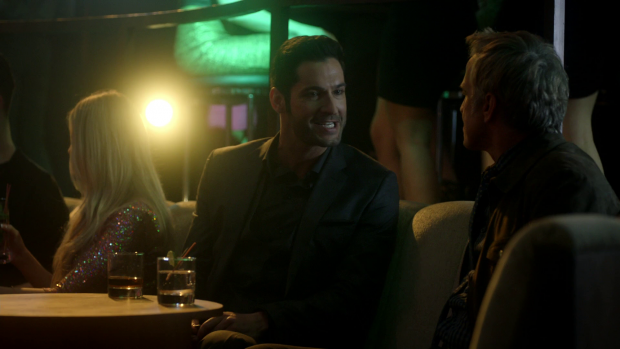 Lucifer has no idea who Rees really wants to punish

Reese starts down a path of obsession upon learning this and starts thinking about how to get revenge on him. His first idea is less than elegant as it involves tracking him down to punch him in the face. Lucifer advises him that the punishment doesn’t fit the crime and urges him to completely destroy him. Of course there’s comedy attached to that advice because Lucifer has absolutely no idea that he’s the one sleeping with Reese’s life. It’s just like Lucifer to inadvertently create an obsessive revenge fantasy starring him and be none the wiser. Part of the beauty of the Lucifer character is that he often fails to consider -or care about- the consequences of his actions.

The revenge mission starts innocently enough with Reese following Lucifer around in an attempt to learn what makes him tick. Amusingly he initially fails to find someone else who dislikes him which only adds to his frustration since he seems to effortlessly get away with his debaucherous behaviour. Many of us have met someone who seems to get everything in life handed to them easily with little to no setbacks so that angle is entirely relatable. The thing is that nothing different is being done here; Lucifer is the same character he has always been but the difference is that the perspective paints Lucifer in a less favourable light because it’s coloured by Reese’s perception of him. Normally we’re along for the ride so Lucifer’s antics are more amusing than frustrating. I’m always an advocate of altered perspectives and episodes that break with a show’s established format because it can often provide insight that normally can’t be achieved.

Reese is someone who can offer commentary on the show as a whole. He asks questions that viewers not savvy with how this show works might ask such as why the devil solves crimes. It’s something he asks Chloe twice and that’s where the time frame of the episode is used to great effect. The first time he asks her she has only been working with him for a short time so she brushes it off but fast forward a year and she has formed her own opinion that comes from the time they have spent working together. She theorises that Lucifer has been wronged in a big way sometime in his past and solving crimes is his way of making up for it. It’s a simplistic analysis but the simplest answers can be the most revealing. Lucifer has been essentially dragged on a mission of redemption and often doesn’t realise that the things he writes off as being fun diversions are often helping him grow as a person. Still, Chloe’s analysis doesn’t quite take full advantage of the close connection between her and Lucifer as much of what she knows about him feels missing. 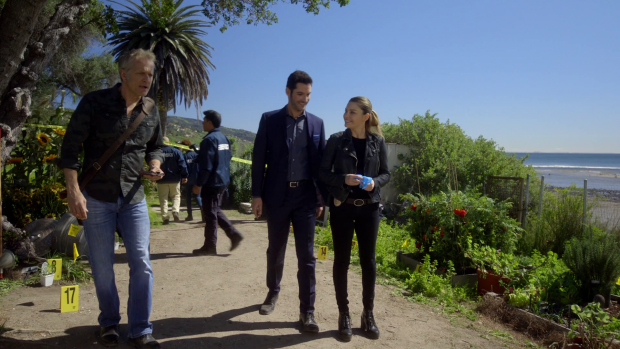 On the job investigative reporting

This episode is very much a study in Lucifer but also a study in Reese as a character. We have one episode to get to know him and most of out knowledge comes from the way he orbits Lucifer’s world. It turns out that he is Linda’s ex husband which adds dark comedy to the mix as Lucifer has no idea of their connection so continues to advise him to get revenge on the man sleeping with his wife while he continues to meet Linda for more than therapy sessions. It’s important to remember that a lot of this episode is set at the beginning of season 1 when Linda was sexually involved with Lucifer while seeing him as his therapist.

While Lucifer’s arc across the series is broadly redemptive Reese is essentially the opposite. It’s a tragic tale of a sad man who wants to prove worthy of a wife that no longer wants to be with him. Linda left him because his focus was elsewhere as she explains when she points out why she is drawn to Lucifer. It’s the classic career over marriage argument but it works well enough here because we see how consumed Reese becomes by trying to find out the truth about Lucifer. He spends a year collecting evidence and covering his office in his findings as he tries to make sense of the whole thing.

This obsession grows when he sees Lucifer’s true face and learns the truth about him. The context of his findings changes after that point and he starts to put it all together. Prior to accidentally discovering the truth he seemed all set to let it all go and accept that Lucifer was simply a really charming guy who found getting what he wanted out of life effortless. After that it becomes about stopping the Devil because he sees Lucifer as evil incarnate. 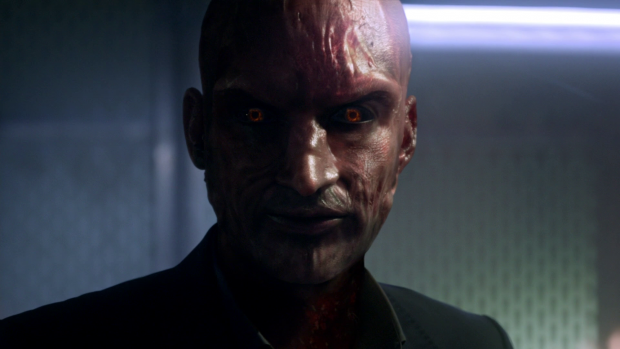 The face of the Devil

Naturally this leads him to warn Linda about what she’s gotten herself into but by this point she already knows the truth and is able to relay her perspective on what sort of person Lucifer is. According to her Lucifer is a good man and is constantly trying to do the right thing. Reese can’t see past the Devil face and is convinced that Lucifer has pulled some kind of trick to have Linda say all those positive things about it when the irony is that Reese is the only one who doesn’t see Lucifer for who he is. As I’ve said this episode is a study in Lucifer and how compelling he is as a character is proven through the lens of a man who has chosen not to like him. It’s fascinating stuff and speaks to how well developed the character is.

As I’ve said this episode is also the tragic tale of a sad man. Reese is horribly misguided about where his life needs to be. He genuinely believes that his intentions are good and that will make things turn out well for him in the end. The old phrase “the road to hell is paved with good intentions” is taken literally here. Reese refuses to move on from Linda and accept the fact that she simply no longer loves him. Nothing he can do or say will change that because the relationship is over as far as she’s concerned and he has absolutely no control over that. He seems to think that accepting blame for all that has gone wrong between them and opening up about how he feels will fix things but it won’t. Linda does appreciate the gesture but it’s not enough to repair the damage.

Linda’s reaction to Reese is equally interesting. Even though she’s frustrated by his constant unwanted interruptions into her life she approaches the conversations patiently and delivers the same level of insight that she always does. It does draw on her professional credentials but it also shows that she doesn’t harbour any real animosity towards him though she would rather he left her alone. 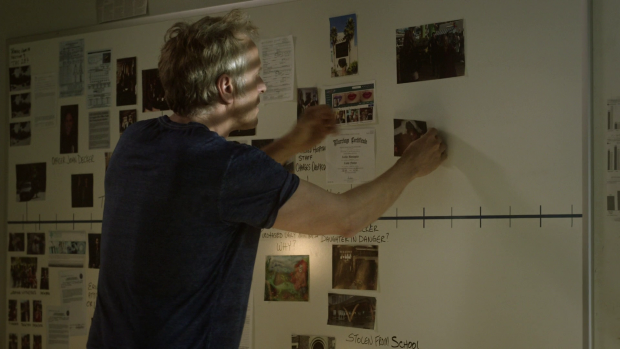 The wall of crazy

Reese consistently ignores all of the advice and squanders every chance he gets to let go and move on with his life. These chances are numerous such as when his editor directly asks if his article has become personal or repeated discoveries that Lucifer isn’t guilty of any crimes or even when Linda directly tells him to move on. He ignores chance after chance because he’s so obsessed with bringing down the Devil and it culminates in him accidentally causing the death of an innocent woman.

Everything leading up to the conclusion is great. Reese petitioning a serial killer named Alvin (John Billingsley) -who preys on those he considers to be frauds- to kill Lucifer completes his arc into complete lunacy. At this point there is no coming back for him as he has definitely gone too far to prove his misguided point. Once the serial killer realises that he was being used under false pretences he gets his revenge and poisons Reese causing Lucifer to realise what has been going on with him this whole time. He delivers a chilling monologue about Hell stating that Humans send themselves and are the own cause of an eternity of punishment when they can leave any time they want. In his final moments Reese realises how wrong he was and sends himself to Hell to relive his mistakes over and over again with no apparent escape. It’s certainly a tragic ending and really effectively done.

This episode is carried as by the performances as it is by clever writing. Patrick Fabian leads the episode wonderfully and blends in with the tone of the show effortlessly. He is consistently believable as a pathetically desperate man and the growing sense of frustration comes through clearly. Tom Ellis plays a supporting role but is as compelling as ever. I’m impressed by his ability to be prominent in a scene without stealing focus from Patrick Fabian. Rachael Harris also does a great job as we see a slightly different side to Linda. John Billingsley also deserves a lot of attention as he manages to create a fully formed serial killer character with very little screen time. I liked how personally offended he was when Reese had corrupted his vision by lying to him about why Lucifer should die. 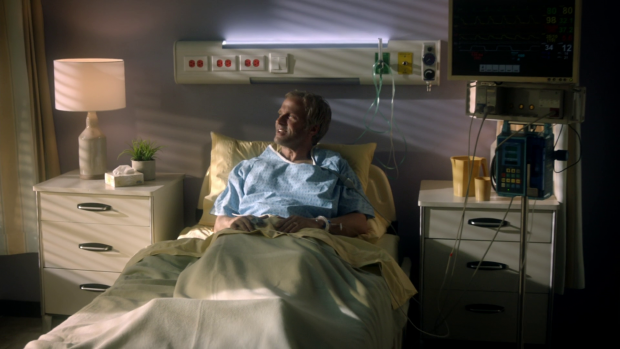 An excellent episode that uses the unconventional format brilliantly. Reese is an interesting character with a wonderfully tragic arc throughout the episode. The episode is very much a study in Lucifer but there’s plenty of opportunity to develop him as a character as well. His former relationship with Linda as well as his growing obsession with Lucifer culminating in a fatal mistake after learning the truth all factors in really naturally.

It’s a very deep episode that explores its subject matter well and the twist at the end about Hell being self imposed torture for those who wind up there is chilling. Especially when Lucifer points out that people can leave whenever they want to but are never able to break the cycle that they are forced to relive.