Lucifer rounds off its 2016 run with the trial of Chloe’s father’s murder, forward movement on Charlotte’s plan and the reveal of what makes Chloe so special.

Where to even begin with this episode? This season has been good to great so far and this episode does feel like a bit of a back step in a lot of ways. The strangest thing about it is that I don’t tend to realise this until I put fingers to keyboard. It’s somewhat fitting that this show is able to cast similar spells as its lead character at least as long as I happen to be in contact with it. 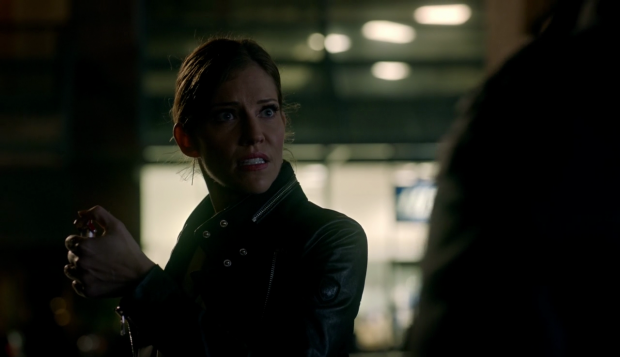 I’ll start of with what worked about the episode because much of it definitely did. It successfully managed to converge a lot of the main character stories into something that came across as fairly cohesive for the most part. We had Charlotte’s affair with Dan paying off, Charlotte posing as her vessel putting her in a position of power surrounding the events of this episode, the fractured relationship between Chloe and Lucifer adding doubt to the whole thing and Maze’s newfound friendship with Chloe moving things along. It’s a lot to cram in but it is entirely focused on the characters that the show follows so remains compelling as a result.

Charlotte’s affair with Dan seemed like something of a throwaway plot point in the previous episode but it turns out that she’s using him to find out information on the case and turn it to her advantage. Dan is oblivious to this at first because she gives him such a good time.

This puts Dan in a fascinating position as he has been working very hard to redeem himself over the course of this season but there has always been that lingering temptation to go off the rails and cut corners. His affair with Charlotte is a representation of that. He is obviously seduced by her beauty but she also represents the easy way out. His relationship with Chloe has ended and is at the point where it can’t be repaired so along comes Charlotte to offer a temporary fix to his loneliness. It’s an incredibly relatable thing for someone to do when they’re as long as Dan seems to be and the fact that it has much larger consequences than he imagined makes it all the better for this show.

As he learns what the consequences of this affair is he launches into repair mode and is genuinely regretful for the problems he has caused. It’s conceivable that he wouldn’t have considered a simple affair to hurt Chloe in such a way but it does and that’s something Dan can’t deal with. For all their differences he loves and cares about Chloe so doesn’t want his actions affecting her negatively. 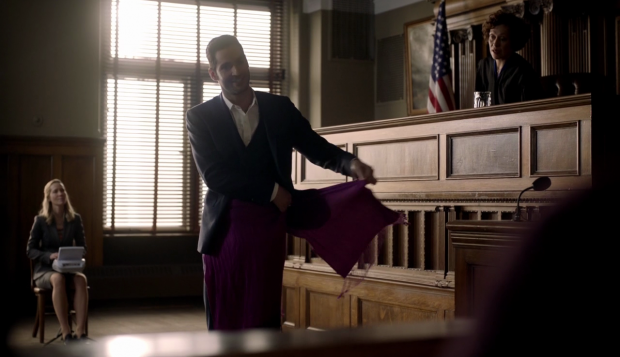 Lucifer puts on a show

This causes him to slide into old habits and do something illegal in order to get what he feels is justice. He does this with Maze’s help which is no surprise but what is a surprise is how good a team they make and how fresh their dynamic feels given that they have never really spent any time together. I wonder if Dan’s actions will be brushed under the carpet or if there will be consequences later in the season.

Another thing that struck me here is that Dan didn’t try to blame Lucifer for everything going wrong even though he arguably would have had a point. The pair have grown closer over the past few episodes and this shows here when Dan accepts full responsibility for what has gone on. It’s a major step forward for the character just as his behaviour takes a step back. I never thought I’d have this much to say about Dan but there it is.

Charlotte’s role in the episode is a bizarre one. The cliffhanger ending of the previous episode was a bit laughable as it was never going to get to the point where Chloe’s car was blown up with her in it and the episode somewhat acknowledges that by having her point out that it was “anticlimactic” when Chloe got away safely. Acknowledging it doesn’t necessarily make it better but the back and forth between Charlotte and Amenadiel was appropriately comical and it never seems like Charlotte is reluctant to pull the trigger so there is some tension even though Chloe isn’t in any real danger.

The really baffling thing about Charlotte in this particular episode is that she has a clear nefarious agenda but nobody seems to be in any rush to stop it. Dan can’t because he would implicate himself but Lucifer and Amenadiel just let her go on her merry way even though she is definitely up to no good. I imagine Lucifer or Maze could do something to get her out of the way for a little while once it became clear what she was up to but it is never even mentioned. 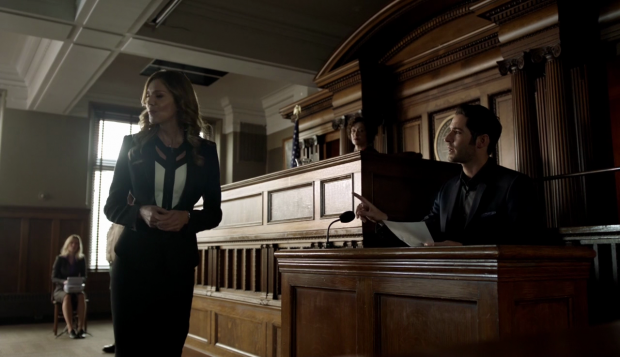 Charlotte casually threatens people but dresses it up with an innocent yet menacing smile and the most interesting thing about her is that she consistently underestimates humanity in really fundamental ways. Her main point in this episode is to prove to Lucifer that Chloe wouldn’t sacrifice what she wants in order to benefit him in the same way that he would for her. She is entirely proven wrong when Chloe refuses to admit that Lucifer is delusional even though doing so would mean that her father’s killer doesn’t go free. It has been well established how desperate for justice Chloe is in this particular case and her decision proves just how much she values her friendship with Lucifer.

This was definitely strong character work and the courtroom setting was confining enough to make the whole plot feel more urgent. The flip side to that is the whole thing felt like a bit of a farce but not the well intentioned farce that I’ve come to expect and love from this show. Lucifer’s animated witness testimony made me cringe and it stuck out at me that nobody corrected him when he swore the oath to his Dad instead of God. Lucifer isn’t well known for taking things seriously but getting tiny details like this wrong for the sake of a joke takes away some of the legitimacy.

I also felt that the courtroom scenes went on a little too long. Lucifer isn’t a legal drama and this episode definitely proves that fact with numerous trial scenes that don’t really go anywhere. The important points were Chloe’s loyalty towards Lucifer and the general particulars of Charlotte making the most of her position but no more than that was required.

The exploration of Maze and Amenadiel’s connection was well handled in this episode. There haven’t been many meaningful scenes between them this season but justifying this by Amenadiel feeling somewhat guilty for his affair with her adds a suitable reason for that. They share some really good scenes in this episode from the destruction of his car which I found hilarious and Amenadiel waiting outside her apartment with flowers to apologise. I can’t imagine anything Maze would hate more but it definitely fits their dysfunctional relationship. 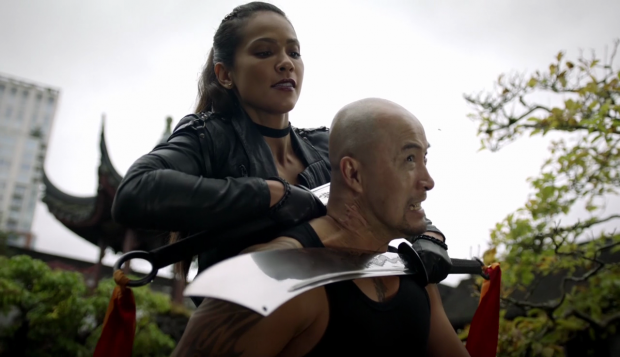 Maze shows what she’s made of

Maze visiting the Chinese Triad headquarters and effortlessly besting their strongest combatant was really entertaining. This show doesn’t boast good action very often but the cinematography and choreography in this particular fight was impressive. I don’t tend to comment on these technical terms often but I definitely noticed them here. It might be killing time but it’s fun time to kill.

Chloe has been an enduring mystery since shortly after the show began. Lucifer is vulnerable around her and only her but it is unclear why that is. We get an answer to this question once Amenadiel meets her mother and realises that God sent him to bless a couple who couldn’t have children which resulted in the birth of Chloe.

This is all part of some mysterious plan hatched by God to create this blessed child and put her in Lucifer’s way for reasons that are yet unclear. Chloe is incredibly important and this means that she is off Charlotte’s hit list since her plan changes to finding a way to use her to get back to Heaven. Amenadiel pledges his allegiance to his mother because he believes the same so that has Charlotte and Amenadiel united against Lucifer and presumably Maze. This could return Amenadiel to the pseudo antagonistic role he had last season or he might feel guilty betraying his brother once he learns that Charlottte’s plans are more than she is letting on.

As for the answer to the mystery that is Chloe, I find myself somewhat underwhelmed by the reveal but I also concede that we don’t know enough about it yet. In theory the whole “Lord works in mysterious ways” idea as it relates to Chloe is intriguing and having God engineer this whole thing for reasons that are yet unclear makes up for the coincidental nature of Lucifer meeting the one human who could make him mortal. It won’t be clear if this is a good reveal until we learn more but for now I find it to be underwhelming and I’m not sure I can articulate why. A large part of me didn’t want the mystery to be answered because there’s no way it could be done in a satisfying way and I guess the next few episodes will either prove or disprove that. 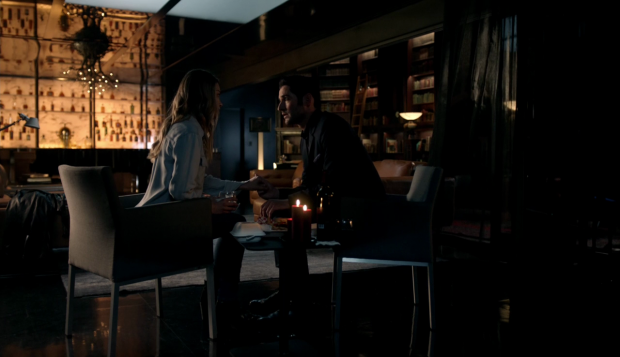 I was wrong last week when I suggested that the love between Lucifer and Chloe was a deep platonic one. This episode practically beats us over the head with the fact that Lucifer is in love with her and is interested in her romantically. I don’t think they really make sense as a couple but their “date” at the end of the episode shows that the connection is starting to deepen until the cliffhanger is a simple will they/won’t they when they are about to kiss. I can see the resolution being that they decide not to and the tension will be palpable for a while but I suppose we’ll find out next year.

An episode that highlights the best and worst of Lucifer at the same time. The courtroom drama aspects of the episode went on for too long and were played too much for laughs even by this show’s standards. Charlotte being allowed to freely go about her business even though Lucifer and Maze realise that she is up to no good is a bit of a stretch but she is well used in abusing her position both with Dan and as a lawyer. Dan’s affair with Charlotte pays off in a big way in this episode when he learns that he is largely responsible for derailing the case and taking matters into his own hands. The fact that he doesn’t blame Lucifer shows how far he’s come yet he manages to slip into old habits when he does a bad thing for what he believes is the right reason.

The reveal that Chloe is a blessed human created to be in Lucifer’s way for some reason is somewhat underwhelming but there is more work to do on this to see where it goes. For now it takes her out of Charlotte’s crosshairs and provides a reason for Amenadiel to ally with Charlotte against Lucifer so that they can get back to Heaven. This is potentially interesting and I look forward to seeing how it develops next year.