“The One With the Baby Carrot”

Lucifer explores the theme of self identity, deals with the murder of a comedian and stretches a collection of small penis jokes all the way to breaking point.

I’ll admit my opening statement was somewhat sensationalised. There was never a point in this episode where I didn’t find the small penis jokes funny. Perhaps my sense of humour is juvenile enough to keep finding things funny about them or maybe Tom Ellis is simply a master of comic timing. We have two seasons worth of Lucifer to back that up and I would say he has proven himself more than capable.

Lucifer says it with puppets

It isn’t all penis jokes; this episode deals with some high minded and interesting themes. The case of the week is related to the overall theme of self identity as the murder victim is a comedian who stole his jokes from another less well known comedian. Since the jokes he stole were personal to the person he stole them from the notion of identity is at the root of the problem.

I’ll briefly cover the case as it’s incidental to the main theme but also has some merit in its own right. The investigation is peppered with some great moments such as Lucifer unwittingly firing a gun concealed within a puppet and a brief exchange about an “itchy butt” joke which ends in Lucifer punching Sheila (Camille Chen) in the face. It’s casually brought up in an exchange with Linda to add to the hilarity as well. The Sheila character stands out because she wasn’t the immediately obvious choice and it was a throwaway line that provided the clue. It could so easily have been missed and rewards viewers who paid enough attention. It almost qualifies as a surprising reveal though the difficulty for it landing was that there was a lot of material surrounding it.

I mentioned last week that Lucifer sees the removal of his wings as a statement to his father that he refuses to be controlled. He continues to remove them no matter how many times they grow back because he wants his father to get the message that he is his own man. Lucifer becomes more frustrated the more he has to do this and he’s blind to the fact that his efforts are completely futile.

The other issue he is facing is that the Sinnerman is moving in on the turf he used to call his own. He is becoming known for granting people favours in exchange for something in return. This is something Lucifer used to do but hasn’t done on a while. He clearly feels violated that someone is taking something that he would like to be known for and perverting it to their own ends. Between thinking God is playing a cruel trick on him with the wings and potentially being involved in whatever the Sinnerman is doing Lucifer is suffering a loss of self that he is finding it difficult to deal with. 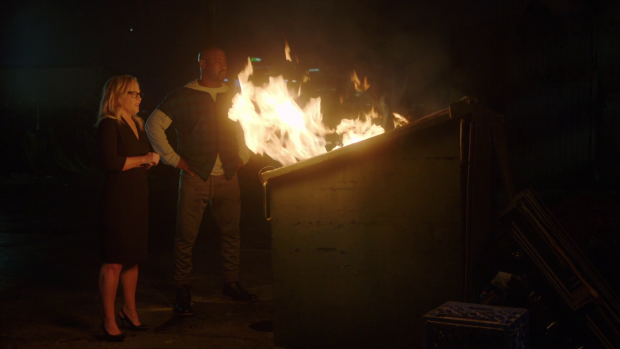 It’s interesting that the favour aspect of the character hasn’t been seen since the pilot episode as it feels like it was something about the character that wasn’t quite working. It makes sense to reintroduce it as it expands the scope of Lucifer’s life beyond solving crimes and general hilarity. Granting favours is a reputational thing as it lets people know who he is and keeps him at the centre of attention which is ultimately something that he wants. Bringing this back should provide some interesting fodder for stories in the coming episodes that will allow a different look at the character.

Amenadiel is also struggling with self identity as is made clear by his subplot involving wing disposal with Linda. The interesting thing about Amenadiel this season is that he has come to the conclusion that he is God’s favourite son and he almost seems to be waiting around to be redeemed without taking any action to try and bring that about. He offsets this by putting himself back on Lucifer clean-up duty who just stuffs his discarded wings in a closet before lopping off another set. Amenadiel takes issue with this as there are multiple symbols of the divine simply lying around for anyone to discover so he enlists Linda to help him. This basically amounts to them tossing the wings in a dumpster and lighting them on fire.

It’s unfortunate this plot didn’t have more time devoted to it as it was a really important step forward for Amenadiel. While dealing with the abundance of wings he is able to talk to Linda and air all of his frustrations. Linda lets him look at life in a new way when suggesting that Lucifer himself is God’s test for him which I find interesting because if anything will test the resolve of an Angel it would definitely be Lucifer. With more time the idea that Lucifer being a test for Amenadiel is another example of the cruelty of God could have been explored in more detail as could the engaging dynamic between Amenadiel and Linda which is a lot of fun to watch. Linda is also able to point out that Amenadiel and Lucifer have vastly different approaches when it comes to their father. Lucifer is angry and vengeful where Amenadiel is more measured and calm. This matches their established personality traits but it also shows how Amenadiel refuses to confront the issues he has with his father despite the fact that they currently define him.

Linda isn’t so much struggling with her identity though she is having trouble coping with her current situation. The way she touches her bandages and clearly tries to put a brave face on everything as other people ask her for advice is very telling in regards to her emotional state. Lucifer does ask if she’s ok to his credit but it feels like more of a diplomatic nicety rather than actual concern for a friends since he’s so self absorbed but it’s clear that Linda is in dire need of some therapy herself but has nobody to turn to at present. Hopefully that’ll change when Maze comes back but I would like it if Linda’s relationships with Lucifer and Amenadiel were far less one sided as it would allow the character room to grow. 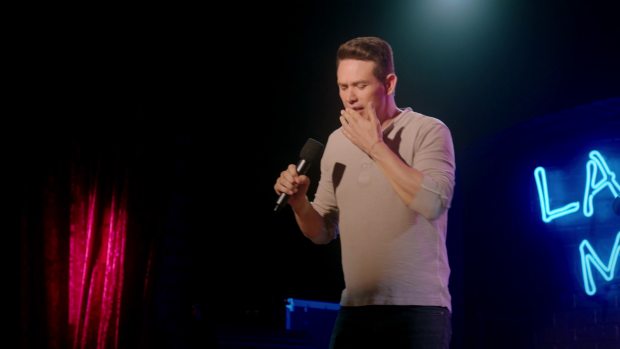 Dan is no comedian

Chloe and Dan are also struggling with their own sense of self. Chloe defines herself by her professional attitude and her reputation where Dan would rather not be defined by his reputation as it’s something that has tainted his career forever. He wants to prove himself and get a fresh start but the arrival of Pierce suggests that this will never happen. Pierce tells him that they are on the only foot they ever will be which suggests that his opinion of Dan will never change. It’s harsh but it’s easy to see why considering what Dan did and how his punishment didn’t fit what he did.

Some insight into Dan as a person comes out when Chloe finds out about his fascination with Improv. She doesn’t push him about it and Dan tries to pass it off as less important than it is which backs up his reaction to Lucifer insulting him when he posed as a comedian. He is a proud man who doesn’t like being made fun of but can’t catch a break because many people see him as a joke. It’s comedically tragic and Kevin Alejandro plays the “lost puppy” side of Dan really well.

Chloe basically wants to be taken seriously by everyone in her life. She wants to make a good impression with Pierce who clearly couldn’t care less about her and wants her relationship with Lucifer to stabilise in some way. From her point of view he is getting more wrapped up in his delusions and becoming more unpredictable as shown by him storming the stage during the taping of the comedy show and throwing a man off a balcony last week. There’s a lot of uncertainty to Chloe’s life right now and it’s clearly affecting her ability to simply live it.

After a strong introduction last week Pierce suffers somewhat as a character with the reveal of his backstory. It comes across as a checklist of cliché statements about having a prior relationship with the Sinnerman who killed someone close to him leading him to move away to a new city. There’s nothing new or interesting in there which suggests some laziness when it comes to writing this character. Tom Welling is still excellent in the role and his place in the cast is natural enough but the back story needed some work. At least there was a surprise when his investigation of Lucifer turned out to not be as clandestine and in depth as I feared it would be. 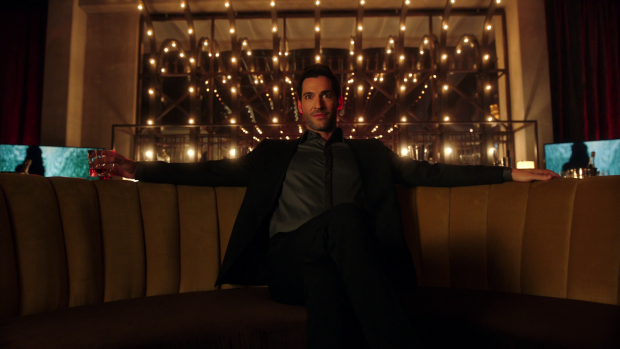 Ready to grant some wishes

An excellent episode that has a compelling and hilarious case of the week as well as a strong theme that applies to the entire cast. Lucifer falls back on the old habit of doing favours for other people when the Sinnerman copies this idea. Between that and the constant respawning of his wings Lucifer is struggling to define himself so much of his behaviour is motivated by ensuring that he asserts his dominance of his own life. Amenadiel stops waiting for things to happen thanks to Linda’s perspective that God be using Lucifer as the test for him. Linda is also clearly struggling but has nobody to talk to which is somewhat tragic and promises further development for her. I also liked that Dan and Chloe are working against their own reputations in different ways to no avail.

Pierce as a character is becoming problematic. Despite a strong performance and natural fit into the show the reveal of his backstory reads like a checklist of uninteresting clichés., Where the writers are going with this is unclear but the back story definitely needed more work. I also feel that the scenes between Amenadiel and Linda could have been longer to further explore their dynamic as well as the difference in approach between Lucifer and Amenadiel.