“The Totally Excellent Adventures of Mack and The D”

Marvel’s Agents of S.H.I.E.L.D. journeys to the 1980s as Mack is consumed by loss and Deke tries to make the best of a bad situation. 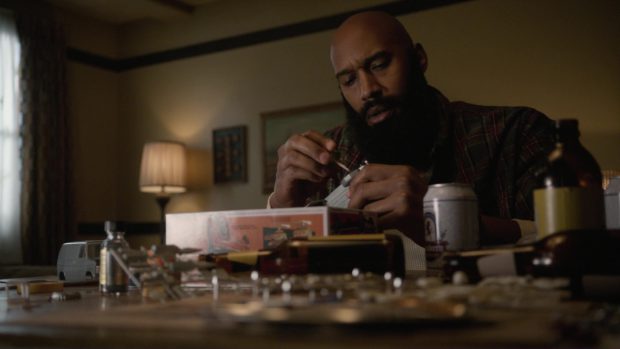 Everyone copes in different ways

This is very much an episode of two halves with the first half being a very sombre account of a man consumed by grief. Mack is still reeling from the loss of his parents in this timeline. It creates a complicated situation as an alternate version of him now has to grow up without parents and he can’t wrap his head around what changes that makes to the man he grows up to be. Mack has lost a lot in his life and now mourns his parents for a second time as they were lost to him under different circumstances.

Mack’s coping mechanisms include some of the usual visual shorthand such as drinking, sitting in dark rooms alone and ignoring personal grooming. A character specific touch is added in with Mack building model cars as a reference to his skills as a mechanic. It’s really well done with Henry Simmons conveying a lot with very little dialogue. These scenes really drag the viewer into Mack’s melancholy and fully sell how consumed by grief he is. Deke’s comedic interludes as he tries to get Mack to come out of his shell are designed to offer some variety and never outstay their welcome. They reinforce how Mack doesn’t want to accept help from anyone while hinting at Deke’s loneliness through his unflinching attempts to reach out to Mack. It’s really good character work that suits those involved and helps to give an idea of how long Mack spends completely unable to pull himself together.

The second half of the episode is built around throwing as many 80s references at the viewer as possible in the time allowed. Some of these land better than others but there’s an overall sense that the episode is more concerned with style than substance which means that it starts to grate after a while. There are some truly excellent touches such as Coulson resembling Max Headroom with his artificial intelligence appearing on a screen after Deke managed to cobble together an interface for his hard drive using a VCR and other components. It’s a great way to have Coulson involved in a way that fits the era while limiting him through his lack of a body. It also leads to some hilarious gags such as him feeling left out of a circular meeting because nobody remembers to drag him into the circle. 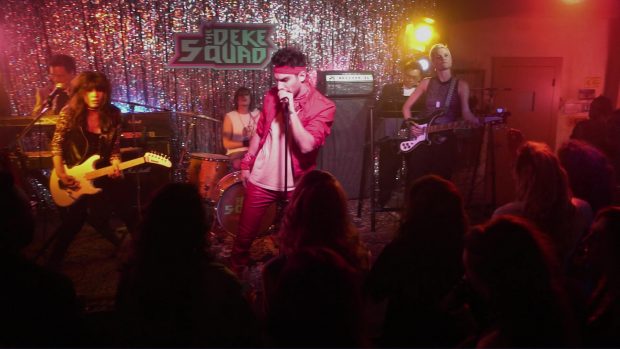 Deke blends in the only way he knows how

Deke’s approach to blending into the 1980s is much the same as his approach to blending into the present day. He uses knowledge of the future to make a living and bask in the reflected glory of people thinking that he’s responsible for the accomplishments of others. In this case he takes credit for writing hit 80s songs such as “Don’t You (Forget About Me)” and “Walk Like and Egyptian”. Mack points out that it’s exactly what he did before and chews him out for further attempts to change the timeline. At this point he is driving at the death of his parents being Deke’s fault because he killed Freddy Malick against orders though it isn’t a serious accusation as he’s merely lashing out. Deke’s casual approach to changing the timeline is certainly a cause for concern so Mack’s point isn’t invalid though his way of articulating it needs work.

Outside of taking credit for some of the most popular songs ever written, Deke shows real growth in his own way through other ways he finds a way to live in the era. He continues in his role as a S.H.I.E.L.D. agent leading a team known as Deke Squad. They fly under the radar by sticking out as much as possible. Deke’s logic of no questions being asked because bands are expected to travel a great deal with large equipment so they can move around practically unnoticed in one respect while being impossible to ignore in another. It flies in the face of conventional wisdom where being covert is concerned but makes a lot of sense when considering Deke’s explanation.

Deke’s growth is shown through his fierce loyalty to Mack as the Director, his unflinching commitment to helping him get back in the game and the effort he makes to ensure young Mack has the best chance of growing up well adjusted. He does so much for Mack without receiving credit for it because he genuinely cares about him and respects him which is a far cry from how selfish Deke once was. He never completely loses his childish nature but there’s a sense that he’s maturing which definitely suits him. 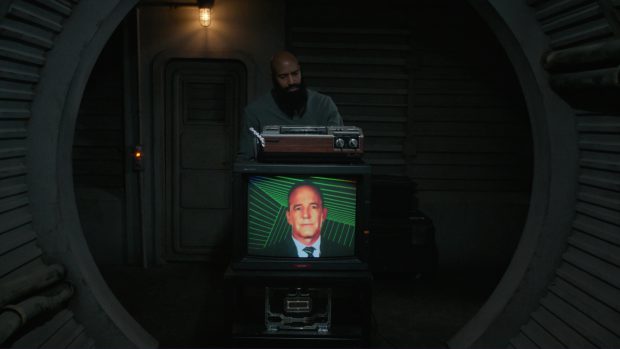 Have you any idea how successful censorship is on TV? Don’t know the answer? Hmm. Successful, isn’t it?

Deke Squad are unfortunately more superficial than the episode seems to think that they are. They’re not all that memorable and are completely lacking in personality despite how proud Deke is of how off the wall they are. In theory it’s a good idea to have a collection of misfits who aren’t as good as they think they are but somehow get the job done anyway but in practice the execution of that idea isn’t as good as it could have been. For this to work the individual members of the team should have a great deal of personality but they aren’t featured heavily enough to stand out in any real way and they certainly don’t earn their acceptance into the fold at the end of the episode. At least it isn’t unanimous acceptance as May see it as odd but there is limited resistance to the idea.

One major failing the episode has is that it goes overboard with the referencing. I’m all for fun 80s references but this was just relentless to the point of being ridiculous. The references include but aren’t limited to Max Headroom, Short Circuit, various popular 80s music and over the top 80s costuming. Picking a few and sticking to them would have been preferable as it would have seemed more deliberate rather than throwing absolutely everything into the episode in the hopes that it would round out as something entertaining. What actually happens is that the stakes are significantly reduced because it presents the appearance of a disposable romp rather than putting the characters in legitimate danger. If they aren’t taking it in any way seriously then we as viewers have no reason to take it seriously either. There’s nothing wrong with having some fun with the era and setting but scaling back the referencing would have helped create more believable jeopardy. I also couldn’t help but wonder why the Lighthouse was an abandoned base when S.H.I.E.L.D. would have been a very large organisation by this point in the timeline.

Another issue is The Chronicoms. As usual they fail to register as a significant threat though in this case it isn’t helped by the tongue in cheek approach the episode takes to the handling of their plan. I did really like the idea of Sibyl enlisting a computer repairman to help build her a new body. Not enough is done to explain why he wouldn’t be more alarmed by what he encountered but it’s a fun retro idea that makes good use of the technology available. The slow print of Sibyl’s face was a particular highlight and the design of the robots that were eventually built were great. The Cylon eye and the Johnny-Five inspired bodywork was inspired. Even if they never seemed like a threat it was entertaining to watch them use their limited movement capabilities to try and take down the Humans they were fighting. Having their defeat lead to Nathaniel Malick gaining possession of the Timestream Crystal was an engaging ending so hopefully Nathaniel Malick will rise to the position of legitimate threat. We’re now at the halfway point of the season so things should start ramping up right about now. Another no show by Fitz this week as well which is deeply concerning. 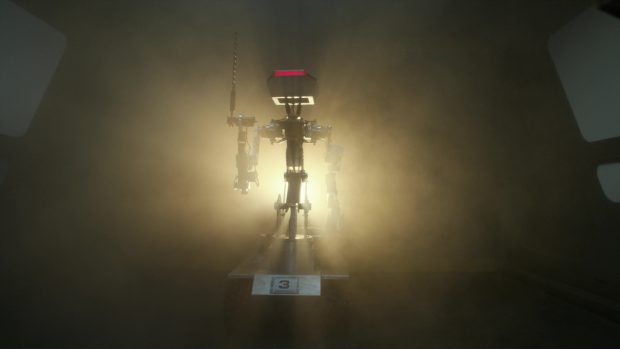 Your mother was a Snowblower!

This episode does really good work with Mack’s approach to dealing with his grief, offers believable growth for Deke and has some fun with the 80s references. It was definitely an episode of two halves with the first half being a sombre account of a man consumed by grief. Some of Mack’s coping mechanisms are standard visual shorthand but there’s enough of his own unique personality injected into the situation to have it work. Deke’s comedic interludes work really well because they never feel like too much of an intrusion while hinting at Deke’s loneliness. Deke experiences believable growth in this episode by showcasing his loyalty to Mack through his actions while still retaining some of the selfishness that will likely never truly go away. He’s used really well and how his character is developed feeds into the plot nicely. Coulson’s Max Headroom inspired look was inspired and used to great effect in both a comedic sense and in terms of limiting his involvement and the robot designs were excellent.

A problem this episode has is that it overloads the viewer with the 1980s references to the point that they become overwhelming and detract from the story. Since none of the characters were taking the situation seriously it was hard to believe that there was any measurable threat worth worrying about. There was fun to be had but a more measured approach should have been taken when it comes to selecting the references. Deke Squad are a lot more shallow than the episode likes to think they are and don’t do enough to justify their presence or being welcomed into the organisation at the end. May questions it but it’s not quite enough. The Chronicoms remain uninspiring as far as threats go but Sybil recruiting the computer repairman to help build her a new body was fun and ending the episode with Nathaniel Malick gaining possession of the Timestream Crystal has potential. Unfortunately there’s still no sign of Fitz.