Marvel’s Agents of SHIELD has the characters figure out their next move after losing the Darkhold and uncovering the LMayD.

Keeping the momentum of a particular narrative going while making sure to connect it to the characters is always going to a difficult juggling act. After the events of last week it makes a lot of sense that the show would slow down a bit as other avenues are explored. This show has been burning through plot at a rapid pace this season but it rarely feels rushed and the characters are more engaging than they have ever been. 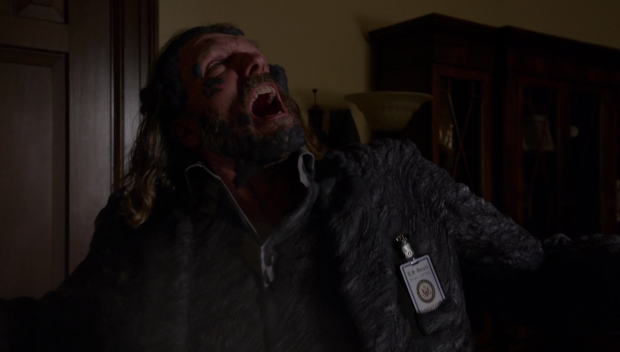 The most affected by the current state of affairs is Coulson. He finally admits his feelings for May and it turns out that she was a decoy all along so now he has to deal with the fact that he has left himself emotionally vulnerable while dealing with the fact that he may never see her again. His entire motivation right now is finding her even if that means getting closure on the fact that she is dead. The uncertainty is what terrifies him the most because it will cause him to forever be distracted by hoping she’s alive.

Coulson’s first step in trying to find May is to seek out the inspiration for Aida. It turns out that Dr. Radcliffe based her on his ex girlfriend Agnes. They parted ways when he discovered that she had an inoperable brain tumour and Agnes seems content to live out the rest of her days in peace and quiet. As the episode goes on it’s clear that she feels hurt and betrayed by Radcliffe and that Coulson’s presence has brought back some uncomfortable memories for her.

Agnes is a strong character and proves to be memorable in her first -perhaps only- appearance. Her backstory is by its very nature a tragic one but Mallory Jansen plays her in such a way that doesn’t encourage the audience to pity her. She is going to suffer an inevitable death for sure but there is comfort to be taken in the fact that she is reasonably content in how she has chosen to live the rest of her life. Mallory Jansen brings a warmth and humanity to her that differs significantly from her more cold and artificial portrayal of Aida. They are vastly different characters and it’s a testament to the skill of Mallory Jansen that she is able to convincingly pull it off.

Coulson’s idea is to use her as the carrot to tempt Radcliffe to come out into the open but it seriously backfires when she is seduced by his promises of eternal life and decides to go with him instead. It’s a surprising outcome but one that can be easily understood. Agnes literally has nothing left to lose so may as well take a chance on the crazy promise offered by her former lover. Coulson even acknowledges that it was a smart thing for her to do and doesn’t bear any animosity towards her decision. 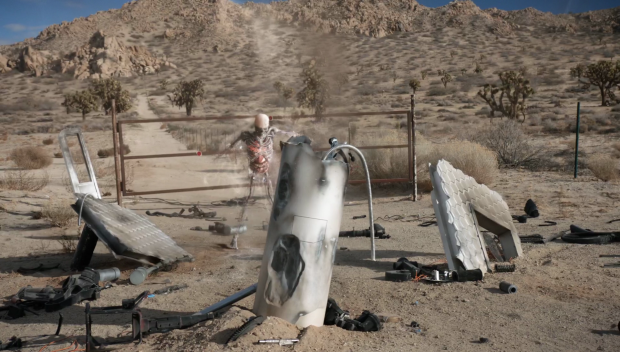 Radcliffe isn’t telling the whole truth when he says that he can save her because he can’t, at least not physically. Using the Darkhold has enabled him to build on the Framework concept he uses to keep May’s mind busy and turn it into a fully realised digital world. It reminds me a lot of the City of Light from the third season of The 100 in that people get to live out their perfect lives and it preserves the essence of someone after their body is no longer sustainable. The slowly reducing vital signs as Agnes leaves her body behind forever in favour of her digital paradise is a surprisingly moving scene that brings a touching end to her short character arc in this episode. It’s entirely possible that she’ll be back to interact with Radcliffe at some point or will be downloaded into one of the Aida bodies to live on. We shall soon see. I look forward to seeing how the Framework factors into the coming episode and how this show explores the concept.

Agnes is an interesting addition at this stage because it adds humanity to Radcliffe just when it would be easy to forget that he has any. She represents his past but also a sense of empathy that we don’t see very often. The writers need to be careful at this point to not lose Radcliffe to cartoonish villainy and plots like this keep giving him the necessary depth.

I really like the subtle ways that Aida is being developed. Part of me still expects her to become sentient at some point but at the same time I would rather that didn’t happen because the exploration of an artificial intelligence mimicking human emotion is far more interesting to me. Radcliffe and Aida discuss how thin the line is between seeming almost human and appearing completely human. The smallest thing could make people feel uneasy. Aida mentions “the uncanny valley” which seems to be what this show is exploring with her so I’d like to see this continue. Her completely human reaction to the knowledge that she isn’t unique shows how perfect her responses can be but the eerie way she walks backwards when taking Agnes’ necklace shows how far she is from real human behaviour. It’s fascinating and I’m interested to see where they go with it.

While this is happening the other characters have their hands full with the Superior and Terrence Shockley (John Pyper-Ferguson) causing issues. As villains go they are worthwhile diversions but also not that interesting. I suspect their purpose is to kill time and be semi-threatening for a little while before Radcliffe’s role in the story comes to its natural conclusion. I did like the irony of Shockley becoming an Inhuman when he’s a member of an organisation who exist to hate and destroy them. It’s a simple thing but it really works and adds some depth to a fairly one dimensional character. The fact that he didn’t expect the Terrigen Crystal to affect him was a really satisfying punch to the gut for the character and Senator Nadeer’s death was a bit of a shock especially considering how abrupt it was. It was an effective surprise and I’m still not convinced she’s dead but if she is then it’s a good way for her to go. 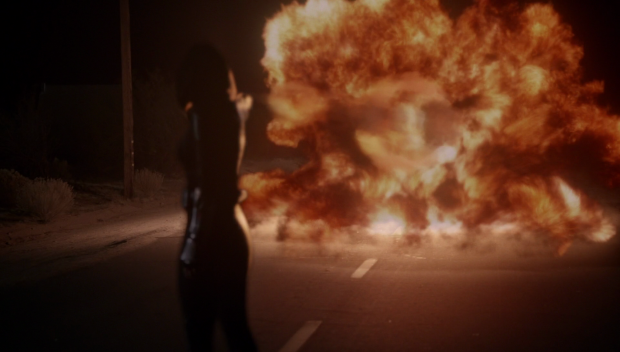 Shockley’s power to blow himself up and reform is a really good one and creates some cool visual opportunities. Who doesn’t love an explosion? I also found the visual effect of him reforming to be very impressive. The end showdown between Daisy and Shockley was really well executed despite its simplicity. All she was doing was forcing him to explode and reform over and over again in order to exhaust him enough for him to be captured. It’s a simple tactic but it’s entertaining to watch because Daisy’s winning personality is able to come out through the back and forth banter between detonations.

Daisy is really coming into her own as a leader and an Agent. Her leadership skills are very natural and she conducts herself with a confidence that feels like a natural progression of her character. It’s also great to see that she is willing to use her abilities despite the physical toll they take on her every time. It’s a very Marvel thing to add limitations like this and it adds consequences to the use of her powers. This also forces her to rely on her other skills.

After the reveal that Mace is essentially a fraud the show has been trying to figure out what to do with him. Turning this into an arc for the character is a smart move as it prevents the show from simply spinning its wheels with this character before finding a place for him. Mace really wants to help and feel useful but everyone around him considers him a liability in the field. The patented Marvel consequences come into play with the reveal that his super soldier serum is actively killing him and it’s only a matter of time before a dose proves fatal. This means that using the serum is pretty much out of the question which effectively renders him as a Public Relations figurehead. It’s tough for anyone to take and Mace doesn’t take it well at all. His desire to feel useful is admirable and I wonder if the show will find a way to incorporate his public role as the Director of S.H.I.E.L.D. in an organic way that also serves the other characters.

Of course he takes the serum in this episode and doesn’t die but finds himself in the clutches of the Superior and his men. Being held captive won’t be a walk in the park that’s for sure. I’m guessing that next week will see the team mounting a rescue of some kind. 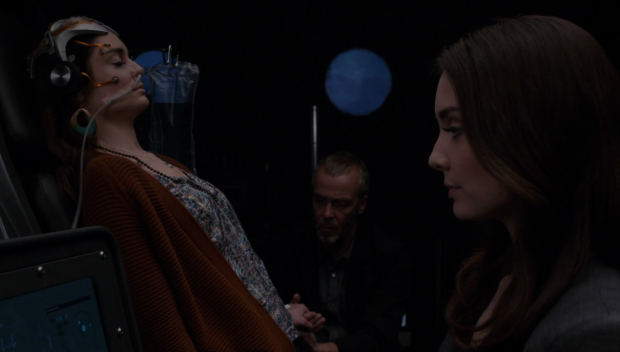 Another excellent episode that shifts gears a little in the wake of the changes last week. Coulson is entirely focused on getting May back which leads him to Radcliffe’s terminally ill ex-girlfriend Agnes. She has a really moving character arc that ends with her choosing to go with Radcliffe so that he can save her life by putting her into the Framework. There’s lots to explore with the Framework concept and the whole thing adds depth to both Radcliffe and Aida that could easily be lost sight of at this stage. The exploration of “the Uncanny Valley” through Aida continues to fascinate me.

The rest of the team dealing with Shockley and the Superior isn’t as interesting because of the villains not quite being as compelling as they could be. There’s a nice sense of irony to Shockley becoming an Inhuman since he hates them so much and his powers were visually interesting. His showdown with Daisy was handled well too. Mace trying to find a use for himself as the serum is taken off the table for him since it will eventually prove lethal is a good way to use the idea that he has become little more than a figurehead. His capture provides some interesting potential for the next episode.