Marvel’s Agents of SHIELD engineers an exit from the framework as Aida’s plan to make herself human comes to a head.

It’s been interesting and fun to spend time in the Framework but we are so close to the end of the season that things need to start wrapping up. The new format of having three smaller arcs over the course of the season to tell more complete stories at a faster pace has worked out really well for this show but the trade off is that plot is burned through at a more rapid pace than usual. This isn’t a bad thing considering how much is covered and how well it comes across but it leaves a shred of disappointment as I want to see more of Ghost Rider or spend more time exploring the potential of the Framework. 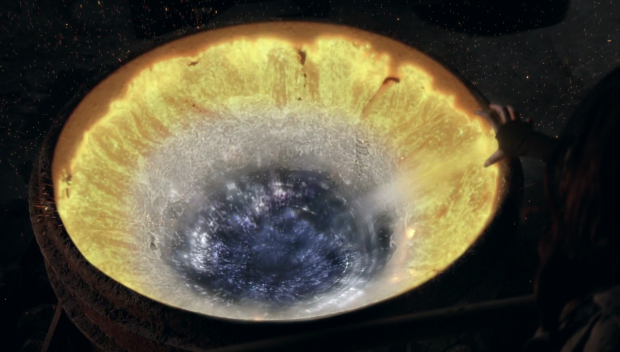 The Framework has allowed the show to explore some really complex ideas and this episode builds on that by testing them in the context of leaving the framework. It doesn’t always do this successfully as the sequence where the characters escape feels somewhat generic and largely misses out on the larger ideas at play here.

Some of it does work such as Coulson reassuring May to take that plunge into the real world and his lack of hesitation in taking the leap himself makes a lot of sense given his desire to live in a better world. This is built up through an earlier interaction with May where he talks about how much better things could be. That moment works because it draws on the relationship between these characters and the transition back into the real world where their old connection picks up where it left off is seamless.

Mack’s decision to remain both makes sense and it doesn’t. If anyone was going to stay in the Framework it was going to be him. This comes with the hammy line “I don’t want to live in a world without Hope”. He of course means this literally as his daughter’s name is Hope and he learns that she died in the real world. For Mack it feels like a no brainer to live in the world where he has his daughter in his life. His decision makes sense as he only remembers the Framework so taking the leap into uncertainty when he knows he won’t have his daughter would be unappealing.

It doesn’t entirely work as Mack’s idyllic life with his daughter can only last so long since H.Y.D.R.A. are still in control within the Framework. It’s only a matter of time before they track down what’s left of S.H.I.E.L.D. and he has to deal with losing his daughter all over again. Fair enough he isn’t thinking about that eventuality at this point. The way the reveal that he has been lied to is clumsy as well. 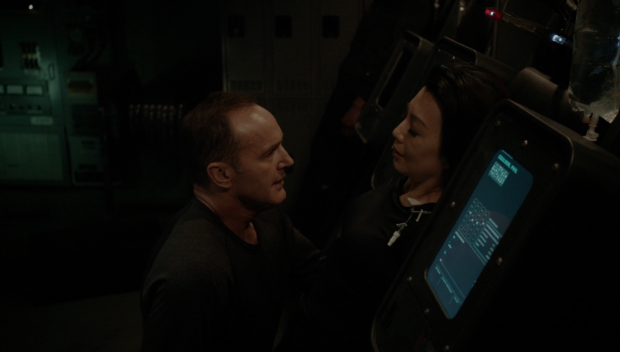 I did like his conversation with Daisy where she shows him a lot of respect by telling him the truth about the real world and doesn’t try to force him to leave the Framework. It shows how strong their friendship and that Mack’s happiness is more important to her than forcing him to leave. If he leaves it has to be his own decision and Daisy accepts that.

Simmons’ attempt to appeal to Fitz’ better nature by refusing to give into his threats was a really powerful scene. Simmons is trying to reach the man she knows but the Framework version of Fitz seems to be really far removed from that. Elizabeth Henstridge plays the anguish felt by Simmons perfectly and the way that increases as Fitz’ treatment of her worsens is heartbreaking. Seeing him so casually shoot her is a massive shock despite everything we’ve seen him do because it was unclear whether Simmons could get through to him or not. It turns out that she can’t and she just doesn’t know what to do about that.

Radcliffe stepping in and forcing him to leave the Framework was both satisfying and surprising at the same time. Despite everything Radcliffe has done his affection for Fitz has always seemed genuine and it’s clear that he has been looking for redemption for a while now. By saving Fitz from himself he is able to find that redemption and feel secure in the fact that he has done the right thing for a change. He does mention that the Darkhold had corrupted his mind which I find to be somewhat dubious as he has never really acted as if he was corrupted but it sort of makes sense that he might convince himself of that.

Simmons going after Fitz’ father as a way to lure him into a position where she could try to get through to him was a good idea. She knows better than anyone how toxic that relationship is to him but sees it as an opportunity to get him out in the open. The exchange she has with his father is an interesting one as it shows just how significant the influence that relationship has been on this version of Fitz and it’s fascinating that the distinction is made between being a good man and a great man. As far as Fitz’ father is concerned it’s impossible to be a great man while also being a good man but Simmons doesn’t see it that way and this underlines the differences between the two versions of Fitz. This is essentially the influence Simmons has had vs. the influence that his father has had and the weight of that comes through clearly. 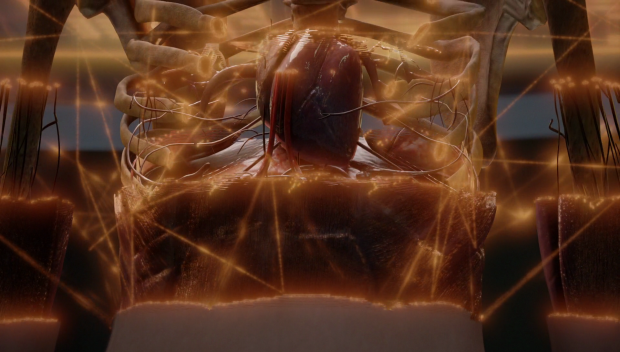 3D Printing is really coming along

The ensuing struggle results in the death of Fitz’ father with Simmons sort of being responsible. This comes after Fitz being told that his father loves him which makes the loss even rawer than it otherwise would have been. Fitz spends the remainder of the episode filled with pain and resentment which manifests in his conversation with Simmons where he shows how sadistic he can be.

When he returns to the real world he is met with the memory of every bad thing he’s done. Coulson tries to tell him that he shouldn’t worry about it as the Framework messes with people but Fitz can’t shake off the terrible things that he has done. He points out that Agnes was real and that he ordered the air strike that led to Mace’s death so he has a lot to feel guilty about. Iain De Caestecker does an excellent job playing that shock and guilt. Fitz goes into an almost catatonic state as he can’t resolve all the terrible things he has done. He is worried that he is a terrible person judging by how casually he carried out these horrific actions. It’s great stuff and I look forward to seeing how he goes about resolving those issues within himself.

Aida’s plan to become a real person is a complete success. The visual effects on her 3D printing a body for herself were really impressive and built to the end reveal really well. I was genuinely shocked that she gave herself the ability to teleport and took Fitz with her. The scene leading up to that where she processed her feelings and the sensations of her human -or InHuman- body was great. Mallory Jansen did an excellent job playing the glee associated with the sense of discovery associated with properly feeling for the first time. I wonder if this will come with a conscience that makes her regret some of her actions. It remains to be seen.

The ability to 3D print bodies for people can definitely happen with other people as evidenced by Fitz’ conversation with Radcliffe where he offers him the opportunity in exchange for information. This suggests that this method could be used to bring back a member of the cast who used to be in the show. The obvious choice was Ward who was sadly absent from this episode but Triplett could be another option. Daisy encourages him to become the new Patriot which could foreshadow his role when he gets printed into the real world. We’ve seen from Aida that his body could be designed with built in super powers which would be a great piece of fan service while restoring a large chunk of personality to the team. 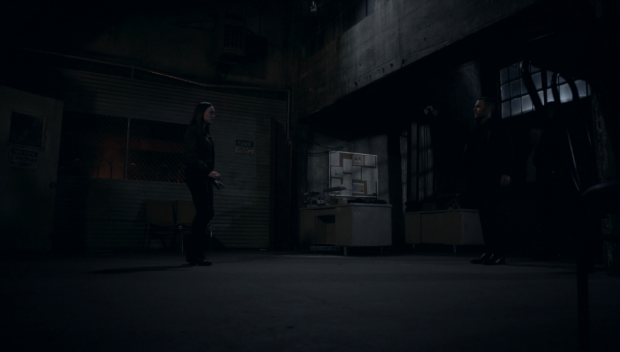 Triplett was a lot of fun in this episode despite his brief appearance. His reaction to Daisy hugging him was nicely played and the assumption that he must have been romantically linked with at least one of the women in the real world was amusing. If he returns to the show then that will be a significant asset. I would personally prefer to have Ward brought back but none of that may happen.

I like that we got to see what Elena and the crew of the Zephyr have been up to all this time. It turns out not much but there were a lot of difficult decisions to be made in the meantime. Landing the Zephyr was out of the question as it’s unknown who could be trusted so their job became about keeping the Zephyr in the air for as long as possible. This meant deactivating all non essential systems which eventually included the cloaking device. This was an effective way to catch the audience up with these characters while showing us that we hadn’t really missed much.

Now that most of the characters are out of the framework the last two episodes have become very difficult to predict. Aida’s next move will be key and I imagine there’s a lot of drama to be mined from getting used to the real world again and dealing with the questionable things that everyone had to do while they were altered versions of themselves.

Another excellent episode that moves the plot along and sets things up for the final episodes of the season. Having everyone except Mack leave the Framework was mixed as the excellent character drama was offset slightly with a fairly generic action sequence. The emotional beats between the characters as they left the Framework one by one were done well with Fitz and Simmons delivering the most engaging. Mack’s decision to stay both makes sense and doesn’t and I like that Daisy shows him respect by telling him the truth and letting him make his choice with the facts in front of him. Fitz’ reaction to all the things he had done upon leaving the Framework and being concerned that he might be a bad person was the high point of the episode and has so much potential.

Aida succeeding in her plan to 3D print herself a real body with powers was great. Mallory Jansen’s performance was believable as she remarked on the sensations she was experiencing for the first time. It remains to be seen if this also comes with a conscience. It’s possible that this method could be used to bring Triplett or Ward back to the show and I wouldn’t object to seeing either one of them return. The suggestion that Triplett becomes the new Patriot seems like obvious foreshadowing but it could also go nowhere. At this point it’s hard to predict how the season will resolve itself but I’m fascinated to see what happens next. 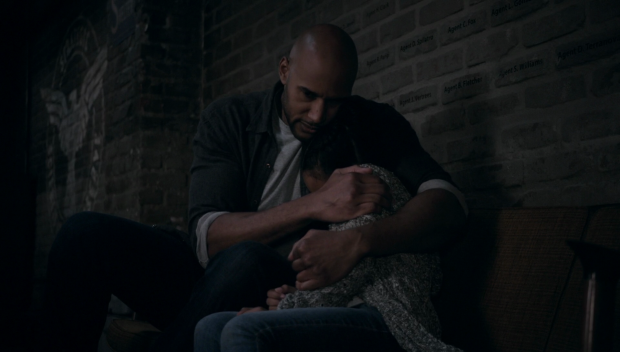