Marvel’s Agents of SHIELD explores the idea of invincible agents as Coulson works to remove himself from General Hale’s captivity.

Last week‘s episode had Simmons learn that she may be invincible in the same way Elena is because it is know that she makes it to a certain point that is far enough away to not be a concern at the moment. Elena came to this conclusion a while back so this episode is more about Fitz and Simmons becoming used to the idea. 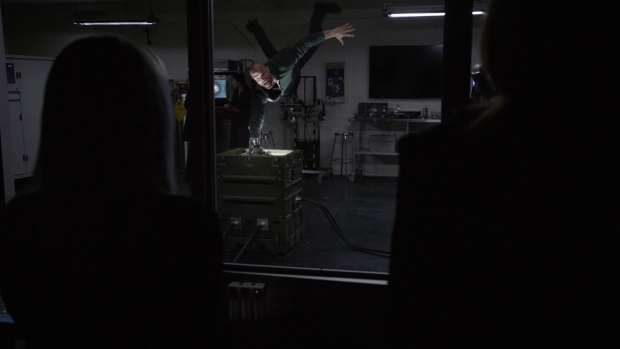 Creel gets more than he bargained for

Simmons is a scientist so finds a way to test the validity of this by engineering an experiment likely to end up in her death. It’s basically a version of Russian Roulette with four glasses of liquid, one of which happens to be poison. Simmons believes that she will pick the three glasses of water because it’s not possible for her to be killed yet.

While I see what she’s going for it’s not really a great test because it is also possible that she happens to beat the odds and drink three glasses of water leaving the glass of poison untouched but for the purposes of this episode this is how she chooses to convince herself that her temporary invincibility is true.

It’s a really tense scene despite knowing that Simmons wouldn’t be killed off in such a way considering her main character status. There is enough of a pause between each glass to build appropriate suspense. Fitz and Mack’s reactions also sell the danger and lunacy of the situation. Ultimately the whole thing is a ploy to free Fitz by Simmons pretending that she consumes the poison with Fitz being the one who knows where the cure is. The fact that Fitz isn’t in on the plan is what makes it work as his terror is genuine. 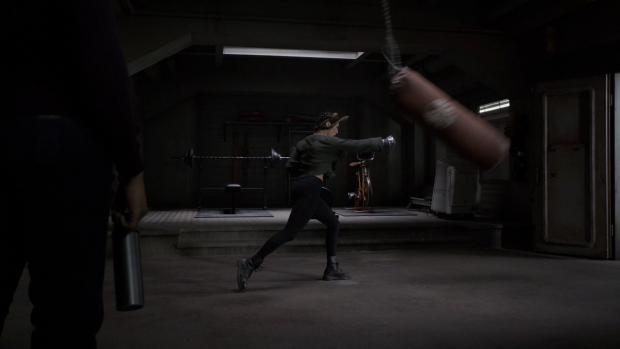 Elena gets used to her new arms

This approach makes sense for the characters as it must be somewhat comforting to know that no harm can come to you. It means that Fitz, Simmons and Elena be confident that their actions won’t result in their deaths though there is a lot they aren’t considering. Their disregard for their own safety could be seen as arrogant presumption and affect their judgement in critical ways such as not allowing them to take a crisis seriously. This attitude could result in unintended collateral damage as they aren’t taking the proper care when they do something. It’s a very dangerous mindset to have and I hope this is explored in the coming episodes. Another more obvious problem is that the presumption of temporary invincibility suggests that they’ve accepted the inevitability of the future even though everything they’re currently doing is to prevent that future from coming to pass. I hope that someone like Daisy reminds them of this.

As interesting as this was on a conceptual level the execution left a lot to be desired. As I’ve mentioned the Russian Roulette scene was appropriately tense but the exploration of the presumption of invincibility is very shallow and the whole purpose is about getting Fitz out of his cell. That’s not a bad thing but there was plenty of opportunity to at least discuss the the implications of this attitude and the episode just doesn’t do that.

Another plot that doesn’t really go anywhere is bringing Robin out of hiding to use her ability to find Coulson. It does allow May’s connection to Robin to be referenced and serves as a reminder of the time loop but the mechanical nature of finding Coulson’s location isn’t all that interesting. There is a quiet tragedy to Robin’s mother knowing that she doesn’t have long left because she doesn’t feature in any of Robin’s visions along with the realisation that Robin sees May as her mother rather than her. 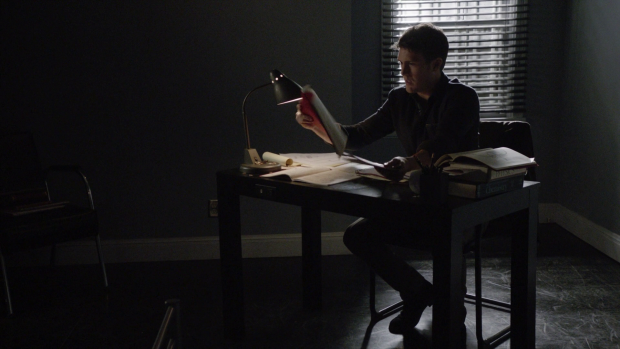 Alex tries to make sense of his father’s journals

The strongest part of the episode was Coulson’s daring escape with the assistance of Creel and Talbot. Creel’s allegiance changes when he realises that Talbot is being held prisoner which reawakens that old loyalty. What follows is an entertaining jail break sequence that creates tension thanks to the uninviting environment along with the possibility that Talbot will end up giving away their location with his outrageously loud voice.

There’s a lot to unpack from this part of the episode as there are a few smaller elements that build into the overall tapestry of the season. Robin’s prediction that Coulson will die helps to add some tension as we all know that Coulson is dying but we don’t know when so Robin’s prediction has some weight to it. I think we can safely assume that Coulson will make it to the end of the season but there’s also no real guarantee of that so Robin’s ominous words help add a layer of urgency to the situation. Her prediction also helps create some semblance of hope for his eventual survival as he does technically die in this episode for a very short period of time before being brought back thanks to Creel’s intervention. He is certainly gone for long enough for it to count suggesting that he may not die permanently at the end of the season. From the point of view of Daisy and May they see this as even more reason to find him as quick as possible as they both feel very protective of him at this point.

Creel is dealing with more than just issues of loyalty thanks to an encounter with the Gravitonium. He is assaulted by visions of Dr. Franklin Hall’s encounter with Coulson from way back in the third episode of the show. I must say I’m impressed that this show is going almost right back to the beginning to create plot points. If this ends up being the last season of the show then linking back to the first season is an easy yet satisfying way to manufacture a sense of closure and make it appear as if everything has been planned even if it hasn’t. It remains to be seen if this referencing will lead to something satisfying but bringing the Gravitonium back into play in a big way is an interesting threat to follow and having Creel tortured by unexplained memories adds some extra depth to that character who could otherwise be dismissed as disposable muscle. 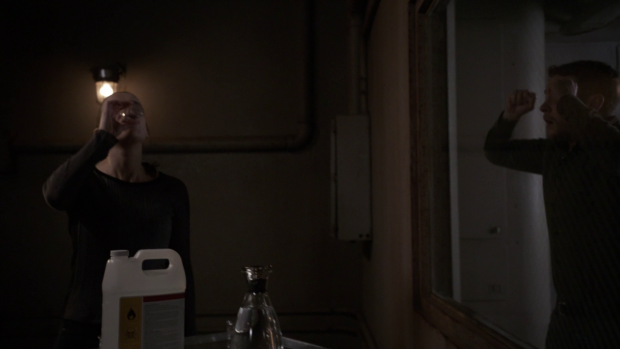 The final scene of the episode taking the form of a flashback involving Raina and Ian Quinn and showing a time during the events of the latter half of season 1 helps build on the Gravitonium plot as we see Quinn absorbed by the Gravitonium in the same way Dr. Franklin Hall was. This explains why Creel talks about two voices in his head following his exposure to the Gravitonium and suggests to me that these characters could somehow reappear in the coming episodes. In the comics, Franklin Hall becomes a villain named Graviton so Marvel’s Agents of SHIELD could add to that by creating a second Graviton in the form of Ian Quinn.

At this point we have a number of possibilities to be the cause of Earth’s destruction. The most obvious is Daisy who fears having that capability. The previous episode added more credence to that theory by suggesting that Daisy might be the one to be infused with the Gravitonium by Von Strucker’s machine to give her enough power to do that. Another possibility is Ruby who I will come back to and now there is the possibility of two Gravity powered villains who either cause the destruction of Earth willingly or are unable to control their powers and do it automatically. The climax of the season could see Daisy take on the two Gravitons with the Earth itself at stake. Of course this is just speculation on my part but it appears to fit the available information.

Ruby is starting to feel marginalised and has a feeling that her mother is up to something that doesn’t involve her. Alex aka Werner Von Strucker -I’ll just call him Alex from now on- is hard at work reconstructing his father’s journals to build the chamber and Ruby is very eager to become the Destroyer of Worlds. We already know that Ruby plans to overthrow her mother but she seems willing to bide her time until she has the power that she desires before doing that. 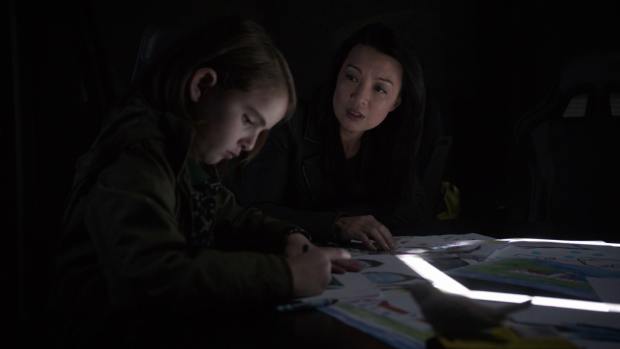 Robin feels secure around May

Her attitude in this episode is very restless as she wants Alex to figure out his father’s journals as quickly as possible and she suspects that her mother might be planning to use someone else for the chamber. For Ruby this is a personal betrayal as she was born to undergo that procedure and has trained her entire life in preparation for that so is unwilling to stand idly by while that opportunity is taken from her. There’s extra complexity to this when her mother appears to give her a dressing down for almost killing Creel but shows that she’s impressed through a knowing smirk after Ruby identifies as the “Destroyer of Worlds”. There is definitely a lot more to this relationship than we’re seeing and it’s difficult to predict what the end point will be.

This episode does a really good job with its action. A notable highlight is the action sequence between Ruby and Creel showcasing some impressive hand to hand combat. There is some confusion around why Creel doesn’t use his powers throughout the fight but Ruby is clearly an impressively savage hand to hand fighter. I look forward to her inevitable confrontation with Daisy especially if she ends up gaining gravity based powers. 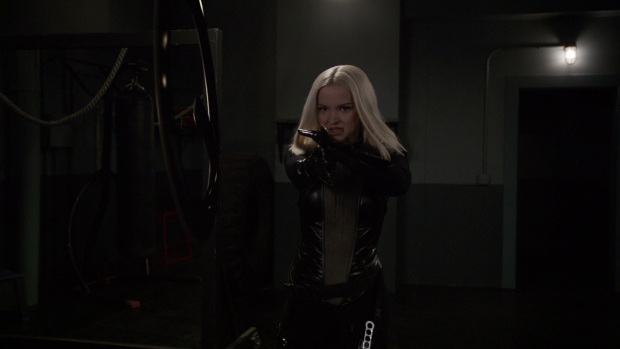 A solid episode that has some interesting ideas that it doesn’t quite follow through on. Simmons’ Russian Roulette style invincibility test is really tense in its execution though doesn’t address other parts of the argument such as the overall desire to change the future therefore rendering her confidence in her own survival irrelevant. There doesn’t seem to be any fear that a reckless attitude could endanger other members of the team so there are definite gaps in this. Bringing Robin out of hiding doesn’t really seem to go anywhere either other than reminding the audience that May has a connection with her and foreshadowing her mother’s death. Not a lot happens in this part of the plot otherwise.

Coulson, Creel and Talbot’s escape is the most interesting thing going on with lots to unpack. Creel having flashbacks to Dr. Franklin Hall’s confrontation with Coulson way back in the third episode of the show is compelling as is the reveal that Ian Quinn was absorbed by the Gravitonium as well. This adds further possibilities to the cause of Earth’s destruction and adds to the tension accordingly. Coulson’s death and almost immediate resurrection could answer Robin’s prediction meaning that there is hope for his survival at the end of the season and her prediction helps to further motivate Daisy and May who are protective of him at this point. Ruby’s dissatisfaction with her mother’s apparent desire to pass her up for the thing she has worked her entire life for works really well as it further complicates the mother/daughter relationship and makes the endgame for the season even more mysterious.