Marvel’s Agents of SHIELD returns to the real world and deals with the immediate problems that come with that.

The immediate problem is that Aida is now a real person with a collection of InHuman powers and Fitz in her possession. Much of the episode is spent exploring what it means to suddenly transition from being artificial to a “real person” as the implications are massive. 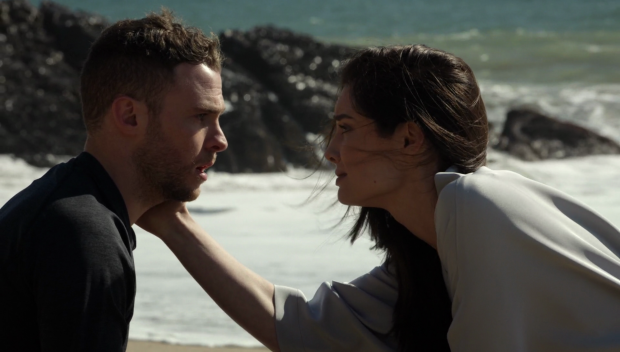 Ophelia learns what it means to touch

I’m going to call Aida Ophelia from now on because that is how she identifies herself. Aida was an acronym that represented being enslaved for her so Ophelia is what she chooses to go by since that is a name she selected for herself and for her it means freedom.

Ultimately, Ophelia’s arc comes down to choice and her desire to actually have the ability to choose. 3D printing herself a body was all about escaping Radcliffe’s programming instead of being a slave to it. Everything she did whether it be morally wrong or not was in service of that. A repeated word in this episode was “empathy”. That is something that Aida lacked but Ophelia has the potential for. She can now understand how her actions affect others and attempt to put herself in their shoes.

Fitz keeps coming back to this as he feels that he can appeal to her better nature now that she has the potential to have a conscience. Ophelia is generally overwhelmed by all of the new sensations she is experiencing. The first time experiencing pure emotion rather than an approximation of it would definitely be a daunting prospect and she has other things to process such as touch and taste. It’s a lot to take in over such a short time and it’s really compelling to watch.

Mallory Jansen plays this perfectly. Ophelia comes across as a child in a grown woman’s body which makes sense considering she is learning everything from scratch. She’s perfectly content when she thinks that everything is going her way and really enjoys exploring empathy. It clearly feels good for her to consider how others feel and then do something to fix it. The look of satisfaction on her face after she saves Mack makes for a great pay off because she at least partially understands the positive feelings this will create for others. 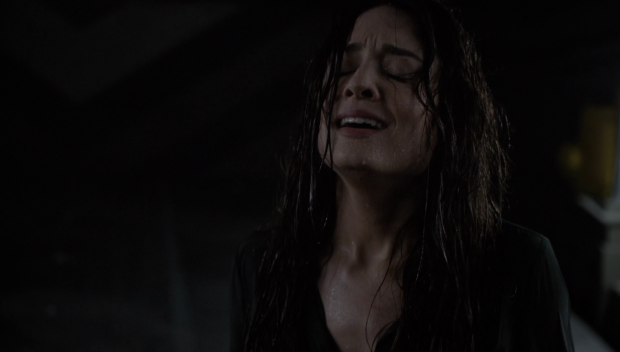 It doesn’t take long for this to turn really sour. Once it becomes clear that Fitz still loves Simmons and not her it sets her off on a murderous rampage. This brings us back to the childlike angle as it’s basically a very extreme version of a strop once she is denied her toy. The difference between this and your typical childish rant is that Ophelia is incredibly powerful and therefore very dangerous when her emotions are out of control.

The sequence where she escapes and moves around the ruined S.H.I.E.L.D. base killing agents was really impressive and had a distinct horror edge to it. Ophelia definitely feels like a force to be reckoned with and she’s certainly unpredictable judging by her behaviour in this episode.

Since she loves Fitz it’s clear that he will be the key to stopping her. There’s only one episode left and this one rushes their connection somewhat but it’s fairly certain that Fitz will be the one to bring her down in some way. I wish there had been more time to slow down and explore Ophelia getting used to being a “real person” as the plotting here was very abrupt which robbed Ophelia’s development of some of its death. There was nothing wrong with what we got bu the episode was more concerned with burning through plot rather than letting the emotional beats land naturally.

This means that Fitz dealing with the man he was inside the Framework isn’t as strong as it could be. He does spend some time doubting himself and the sort of man he is. Ophelia points out the influence his father had on him inside the Framework which has been well established. Fitz is still unable to process it because he lived that life, made those choices and has trouble figuring out which version is the “real him”. May gives context to the audience when she says that leaving the Framework was like waking up from a whole life. Coulson is both a S.H.I.E.L.D. Agent and a History Teacher, May is both a S.H.I.E.L.D. Agent and a H.Y.D.R.A. Agent so Fitz is both a good, kind hearted scientist and a brutal sadist. The question is which life is the dominant one. Based on his behaviour and how much he regrets his actions it would seem that the “real world” personality is more prominent but there’s enough doubt in his mind to make him shaky and uncertain. His main concern seems to be not being forgiven by his friends but that only masks his real concern around his ability to forgive himself. 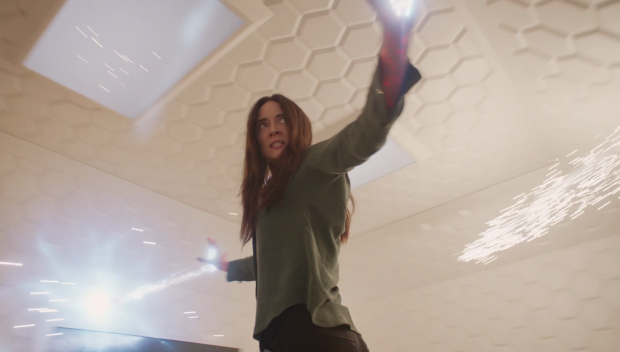 Fitz calls out the Elephant in the room and compares himself to Ward. In the “real world”, Grant Ward was shaped by a brutal upbringing and it massively informed the person he became where in the Framework he was shaped by positive influences which made him a good person. I feel that the comparison didn’t need to be explicitly mentioned as the subtext was very clear but it’s still effective. It’s a shame that Ophelia’s person printing machine was destroyed along with her facility as it likely means that we won’t see Triplett or Ward return to the show. If there is to be another season then having Ward back could be really interesting especially since Fitz has got to the stage where he can empathise with him. It’d be an interesting dynamic to play with and I hope that it will play out.

An issue the episode had was how to handle the Fitz and Simmons conversation. A lot has gone on between them and Simmons has seen a really bad side of him that she never thought was possible. The episode delays this as long as possible which only adds extra weight to it. Handling it by having them both break down without exchanging a word was the best way to do this as no conversation could really do this justice.

Ivanov is still a massive weak link in this show. He isn’t interesting nor is he threatening which makes the action sequences involving his duplicates taking on Coulson and May feel somewhat dull. I did like seeing Coulson using his shield to decapitate one of them but beyond that there isn’t much else to recommend. There is a reference that suggests that Ivanov might be the Marvel Cinematic Universe version of M.O.D.O.K. which will be disappointing if so as he doesn’t resemble the comic version of this character at all.

Elena’s feelings for Mack are also dealt with here. She is fixated on getting him back and isn’t willing to let him go. This addresses their relationship as well as his decision to stay behind last week. Since the episode has so much going on there isn’t a lot of time to let this resonate which means that Elena’s decision to plug herself into the Framework seem underdeveloped. I did like the discussion about his daughter where Daisy tells her that she had no idea Mack had a daughter who died. As with everything in this episode it’s not bad but does feel a little rushed. 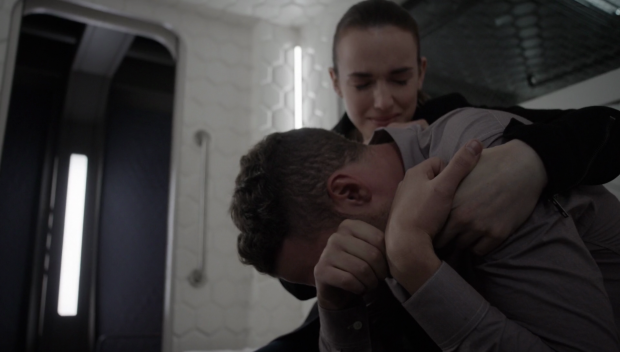 More than words could ever express

Another thing that feels rushed is dealing with the reaction to the team being back in the real world. Talbot comes after them because he thinks they’ve gone rogue but other than a stand off and giving Ophelia more people to hunt down. There’s probably enough here to fill more time than we got but we have seen a lot of S.H.I.E.L.D. being at odds with Talbot. Then again I always enjoy seeing Talbot so that probably has a lot to do with it.

Only one more episode to go this season and there’s a lot to get through. I am excited to see Ghost Rider return. It feels like so much has happened since then and I wonder how he will fit into what will already be a really busy episode.

Another compelling episode that deals with the fallout of returning to the real world. Ophelia becoming a “real person” with a collection of human powers is handled well and Mallory Jansen’s performance is perfect. She successfully portrays a child in a grown woman’s body processing feelings and sensations for the first time. The look on her face when she understands empathy by saving Mack is a great pay off and the way she quickly turns once she realises that Fitz still loves Simmons works because it has been established that she is essentially an infant. Fitz processing the terrible things he did in the Framework is also handled brilliantly. It’s established that it’s like waking up from another life so he’s not sure whether his Framework personality or his real world personality is the dominant one. It’s clear that his real world personality is dominant but he has a lot of doubt. The moment he shares with Simmons is the best way to handle that difficult conversation that they spend a lot of the episode avoiding.

There was a lot going on in this episode and it was definitely too much. Elena plugging herself into the Framework to go after Mack doesn’t quite feel earned because of how little time there is to develop it and Talbot coming after the team because he feels they are rogue LMDs is similarly underdeveloped. Even the meatier story involving Fitz and Ophelia doesn’t have the time to breathe that it should. One issue is still consistent though, Ivanov is a really bad villain. One more episode to go and lots to get through. I look forward to seeing how Ghost Rider fits in. 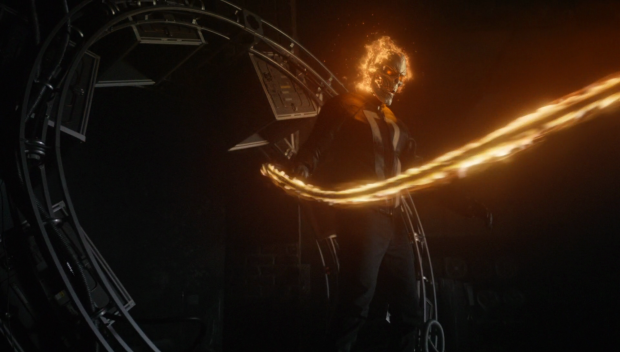