Marvel’s Agents of SHIELD returns from hiatus and places the characters in a world they don’t belong where H.Y.D.R.A. reigns supreme and everything is about as bad as it can get.

Alternate realities eventually creep into science fiction shows in one way or another. The Flash frequently deals with alternate Earths, DC’s Legends of Tomorrow recently spent an episode in a very different reality, Fringe spent a long time hopping between two versions of Earth and Star Trek had an iconic trip to a mirror universe in the still excellent “Mirror Mirror”. There are numerous other examples and they all have one major appeal to them. That appeal is seeing something different with characters we find familiar. The simple fact is that it’s just fun to tug on the “What if…” thread and speculate about what might have happened if circumstances had been different. In essence that is what this episode does. 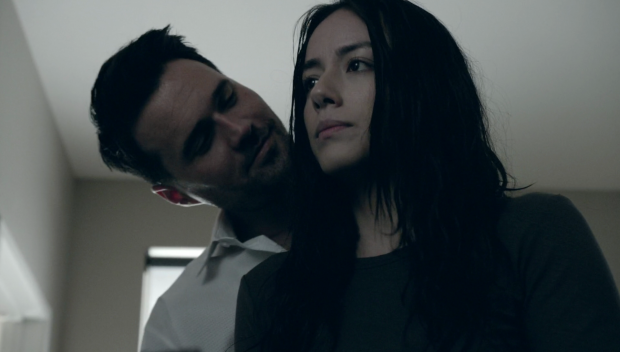 Daisy wasn’t prepared for this

The eyes we see this world through belong to Daisy and Simmons who are the only characters aware of where they came from. Everyone else is living out a fantasy life where all of their pain has been removed and this has resulted in H.Y.D.R.A. completely taking over.

It isn’t stated explicitly but Daisy and Simmons both theorise that May saving the young Inhuman girl in Bahrain is the catalyst for all of this. It’s mentioned that Inhumans became known to the world when the young girl killed a bunch of kids at the S.H.I.E.L.D. academy which caused Simmons to die -more on that later- and set things in motion to get us to this point.

We don’t see much of May but it’s clear that all vulnerability has been stripped away and she is completely focused on the mission. She is loyal to H.Y.D.R.A. to the point that she barely trusts anyone else around her. The near maternal bond she had with Daisy is gone and the default reaction around her seems to be fear. This tracks with the character we know from season 1 who commanded a lot of respect and some measure of fear from those around her but now that she is an Agent of H.Y.D.R.A. that is amplified.

Coulson’s desire for a quiet life is amplified and he works as a school teacher preaching H.Y.D.R.A. philosophy while reporting any kids who express opinions counter to their beliefs. This is a version of Coulson who has absolved himself of any responsibility and refuses to feel the guilt that plagued him in the real world. Since he doesn’t give it too much thought he is able to be happy and live a simpler life. 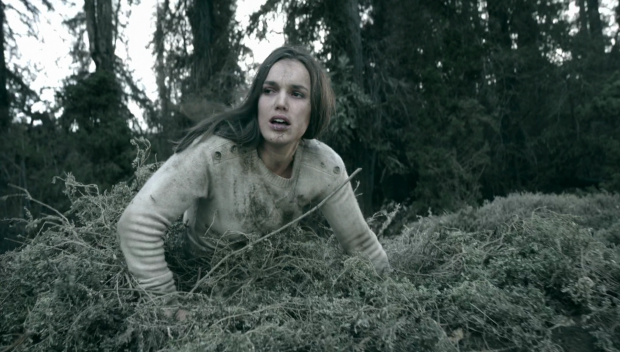 Simmons has had better days!

Fitz has also changed significantly to the point he is cold and sadistic. The suggestion is that the death of Simmons removed that influence from his life shaping him into a bitter and twisted person. Again, this is all speculation but it makes a lot of sense given how empathetic Fitz was. This version of him is great to watch even if it is unnerving. Seeing a once compassionate man casually torturing someone without any sort of emotional reaction on his face whatever is really disturbing and only intensifies the fact that this reality is very different from the real world.

Thankfully this episode doesn’t overload us by touching base with every single character as this would lessen the impact that seeing their different lives has. A lot of ground is covered but we still don’t know what happened to Mace, Dr. Radcliffe or Mack. I suspect their roles will be equally surprising when we find out what they are.

Daisy’s life is also very different but she has the misfortune of knowing absolutely nothing about it. She quickly finds out that people still call her Skye and she’s in a relationship with Ward. The H.Y.D.R.A. connection soon follows so she finds herself overwhelmed by lots of information at once and it’s clear that she struggles to keep up. Of course this manifests as her behaving strangely around everyone who don’t pick up on there being anything wrong despite them being highly trained agents. It’s a conceit to move the story forward of course but it does stand out.

Daisy is of course horrified that this version of her would enter into a relationship with Ward and is even more shocked when it turns out to be serious to the point that she wants to live with him. They are apparently an effective team and work together frequently which makes her really uncomfortable. Eventually Daisy sinks into playing the part but it does happen a little too late. 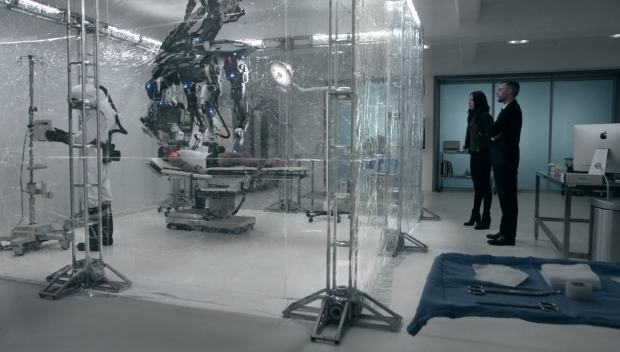 Fitz is a real sadist

It’s great to see Ward back. I’ve always liked the character and Brett Dalton does a great job playing him. His presence in this episode is well handled as the expectation is that he’s completely loyal to H.Y.D.R.A. given his past behaviour so it’s a genuine surprise when he turns out to be working with the resistance against them. As Simmons points out he’s always a double agent no matter what but in this case it’s in a really positive way. I look forward to exploring Ward in this way and I wonder if the writers will find a way to make this version more permanent.

Simmons doesn’t have an easy time of it as she has to crawl her way out of her own grave and find a way to get around. It’s not easy in a H.Y.D.R.A. controlled society as everyone needs to have I.D. on them at all times or face prosecution. Simmons is carrying around a S.H.I.E.L.D. I.D. which definitely isn’t a good idea and her general situation is messed up. She literally wanders around smelling like death and has no idea how to navigate the world she now lives in. Things start to look up when she reunites with Daisy but the fact that their escape hatch doesn’t work adds extra tension to the coming episode.

It’s important to remember that this world isn’t real. The episode does a really good job of reminding the audience of that while also leaving room for it to be forgotten. Both Daisy and Simmons are immersed in it to the point that they start to believe it and had to physically remind themselves that it wasn’t genuine. I felt much the same throughout which I found to be impressive as it can be difficult to make a world that isn’t real feel like it has weight and creates a sense of danger.

The framework also allows for some really complex ideas to be explored. We get a different take on the nature vs. nurture debate through the actions of the characters. The idea that people are good or bad by nature is something I’ve never subscribed to as I think that choices and circumstances shape who people are. This episode seems to agree with me by showing that different circumstances fundamentally change the people we know and alter their allegiances in really extreme ways. 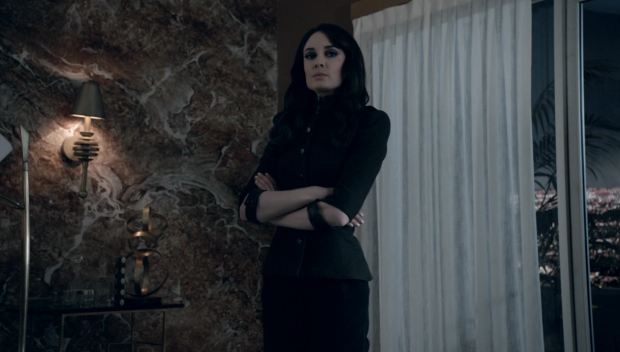 Ward is an interesting one because a scenario where he has the chance to be fully behind H.Y.D.R.A. and have them win puts him on the opposite side of it. He isn’t real of course as he is a program that is part of the framework but he must be created from the memories of those who knew him so it could be that the circumstances that shaped Ward into being loyal to H.Y.D.R.A. happened very differently. It’s possible he was never discovered by Garrett and instead developed more positively. We’re still at the beginning of finding this out but it’s fascinating to think about.

It’s also interesting how this world has been built to feel as real as possible. The programs within this reality question the overwhelming H.Y.D.R.A. dominance. I found this interesting because it would make sense that there has to be a measure of conflict in order to make something seem more real. It was mentioned in The Matrix films that humanity rejected an early version of it because it was too perfect and it would make sense for the framework to be built with that in mind. People won’t reject it as long as they feel that it’s real.

Interestingly it’s also shown to be flawed with Coulson obsessively scrawling “it’s a magical place” on bits of paper and remembering Daisy at the end of the episode. There’s clearly a thin veil pulled over everyone’s eyes that doesn’t seem to be that difficult to get around. Coulson immediately seems predisposed to question it but I suspect that May will be the hardest nut to crack.

Aida is naturally in the middle of this and revealing her to be Madame Hydra was a really nice touch. The seductive way she behaves towards Fitz is really unnerving to watch and Mallory Jansen does a great job of playing this. I’m all kinds of excited to see how this plays out. 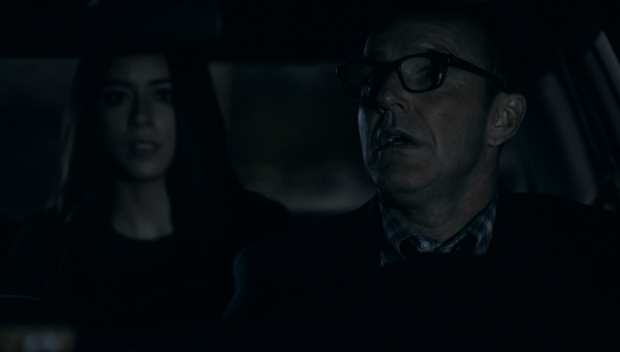 Coulson is encouraged to remember

An excellent start to the new arc with a really fascinating alternate world concept that is rife for exploring. Seeing it through Daisy and Simmons’ eyes really works and it’s interesting to see how the characters have been altered by this. Most interesting is a detached and sadistic Fitz as well as a version of Ward who rebels against H.Y.D.R.A. These were all effective surprises and I look forward to seeing how these are explored along with the complex arguments like nature vs. nurture.

The framework itself is interesting because I had to keep reminding myself that it wasn’t real. It completely immerses both the viewers and the characters to the point that it’s easy to forget that it’s actually a simulation. This is good because it establishes clear stakes that are meaningful right away. The only real issue I had was that a room full of observant agents didn’t notice anything strange about Daisy’s behaviour and wrote it off without really exploring it. I’m fascinated to see how this world continues to develop and what the ultimate endgame is here.