“The Gentleman’s Name is Gorgon”

Marvel’s Inhumans reunites the entire Royal Family as Maximus feels his hold on Attilan start to slip away.

There are only two episodes left in the season after this one and we are finally getting to the point where the entire Royal Family are back together. I wish I could say that their reunion is hotly anticipated but this show has been so misguided in both plot and character development that most of what they do at this point is immensely frustrating. 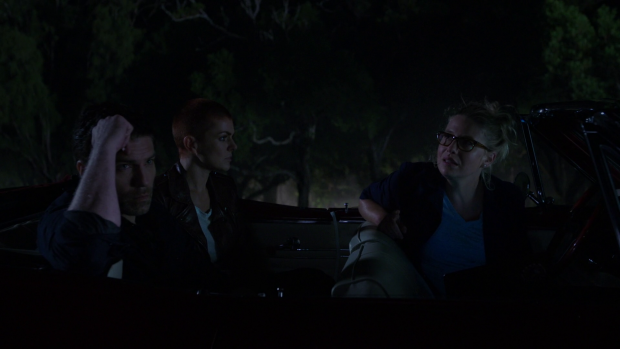 So guys, why are you so racist?

Hilariously the first thing that happens when all but Crystal are back together is that they split up which gives the characters almost no time to interact and prove to the audience why them being one another is a good thing. If they are a family then their connection should feel familial but it really doesn’t.

At least the groups make sense. There has been very little time devoted to exploring the relationship between Black Bolt and Medusa so having them tasked with finding Crystal and working together is a reasonable decision. Unfortunately the show doesn’t really focus on them as a couple and instead decides to do a half baked analysis of the political system of Attilan. The conversation covers what to do with Maximus and very little else. Medusa feels that he deserves a trial and to let the people decide what to do with him where Black Bolt apparently has vengeance on his mind which unfortunately seems to counter my thinking from last week that Black Bolt was starting to see the flaws in the system he is at the top of.

We do learn that Black Bolt vowed to be a different kind of King to his father but we have very little idea of what that actually means. It’s well established that Black Bolt’s parents banished -read killed- Medusa’s parents which does seem like an example to not follow but we haven’t really seen any evidence of how Black Bolt is any different as a ruler. He definitely perpetuates the class system because he probably feels that it’s necessary for survival and he would certainly have had a hand in locking Mordis away which may not be “banishment” but it certainly takes away someone’s freedom on the most fundamental level. Mordis makes a strong case for why he feels resentful in this very episode and it’s brushed aside. We are 3/4 of the way through the season and I still have no reason to feel sympathetic towards the lead characters.

Louise being part of “Team Find Crystal” serves as an excuse to exposit on Inhuman history and try to explain to the audience why Inhumans hate and fear Humans so much. The reason for it is that they used to coexist on Earth a long time ago until Humans decided they were uncomfortable with their powered cousins so fought against them forcing the Inhumans to flee. This brief explanation is supposed to explain why Inhumans are racist. All they see when thinking about Humanity is that past and they aren’t able to move away from that. 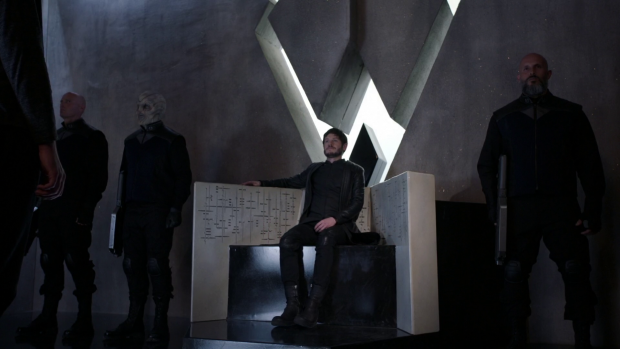 One thing the show fails to explore is how details can be lost over the course of history. Nobody stops to question the accuracy of Medusa’s account. Perhaps there was a good reason for Humans to start attacking Inhumans or extremists on both sides that didn’t represent the views of everyone. Having the Inhuman characters open their mind to the possibility that their history might not be as simple as they think it is would go a long way towards justifying a change in attitude on their part. It’s looking less and less likely that Medusa’s hair will grow back by episode 8 as well so disappointment comes from everywhere.

Instead we get the repeated notion that “not all Humans are bad” but coming from Louise this time instead of Dave. It is her belief that most Humans are good people and it would be fair enough if this continued assertion resulted in the Inhuman characters changing in some meaningful way but that isn’t what happens. Medusa only seems able to admit that Louise isn’t a bad Human but she shows no real empathy towards any others.

This is echoed when she finds Crystal and turns her nose up at Dave. I can personally understand why someone would immediately dislike Dave but it shows that Medusa feels that each individual Human has to prove themselves to her. Crystal tells her that Dave is a good person and the issue isn’t really brought up again but it is interesting how consistently portrayed the racism on the part of the Inhumans is on this show though it’s a pity that nothing is done about it.

The other team consists of Karnak and Gorgon and it’s much more entertaining to watch. Their team-up is the best thing the show has done and I actually feel more irritated that it took them this long to show us this. Splitting up the characters was definitely a mistake especially since nothing interesting was being done with any of them. Revealing the potential in the interactions between Karnak and Gorgon makes this even worse as the writers squandered the opportunity to have these characters bounce off one another in every episode. I imagine this show would have been much better if the group had been split up but Karnak and Gorgon had been together. The show would have still had the same problems but at least there would have been entertainment to be had in their scenes. 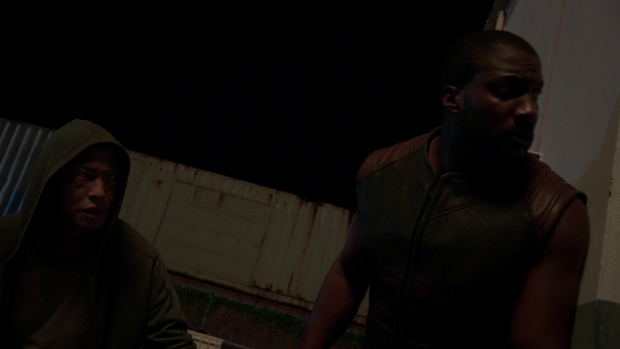 Still, it’s better late than never and their scenes are very good value. The dynamic between Karnak’s straight man and Gorgon’s more impulsive attitude works really well thanks to the performances by the actors. It’s a fairly common dynamic but it persists because it works and this episode delivers a really good example of that.

The slow and deliberate action sequences are another nice touch as it serves to highlight the skills of the characters. Karnak is especially impressive here as he systematically brings down the other Inhumans by first manipulating them psychologically to distract them and then striking after that point. Gorgon’s approach is more direct but he is also very adept at using the surroundings to his advantage which does contrast the brawn over brain approach taken by him in earlier episodes but works well enough because he’s working with an able strategist in Karnak. It’s also interesting to note that neither of them use lethal force which suggests a code of honour that they abide by where they believe in bringing their opponents to justice. There is the implication that they don’t feel comfortable killing their own kind as well though it isn’t explicitly covered.

Unfortunately this episode results in the death of Gorgon which means that the taste we receive of his engaging dynamic with Karnak is all that we will ever get. Killing off Gorgon makes no real sense no matter what way you look at it. The intended effect is to raise the stakes through the loss of a main character and reaffirm Black Bolt’s commitment to stopping Maximus but it doesn’t work because the previous episodes have done such a terrible job of developing the characters that his loss feels almost meaningless. There is no weight to the death either because no time is spent actually dealing with it before moving onto the next part of the story. 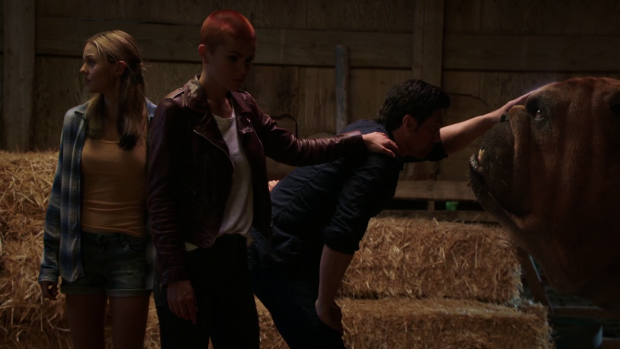 Crystal’s scenes are as infuriating as usual. It turns out that teleporting all over the place with Dave is making Lockjaw’s injury worse but she shows little sympathy when learning this and seems more irritated that she can’t continue to use him for transport. Her relationship with Dave is painful to watch and having it progress to the point of romance is something that isn’t worth caring about. At least we got to see a display of power on Crystal’s part when she creates lightning as a signal for her family. Now that she is back with the other Inhumans I can’t imagine what is left to do with her as she hasn’t progress beyond being a bratty entitled princess.

Maximus is now in full insane fascist mode which is a complete waste of the character. The episode begins with him having a dream featuring Black Bolt and the rest of the Royal Family returning to punish him which seems to fuel his motivation to solidify his rule. He sends more Inhumans to Earth to make sure that they’re killed and keeps guards around him at all times because he fears that someone will try to kill him.

Sending the other Inhumans to Earth does tie into the idea of Attilan’s rigid caste system causing unrest among the population as there is mention of the miners seeing this as an opportunity to escape the role that was forced on them. Mentioning this isn’t the same as exploring it though and the more nuanced Maximus of earlier in the season might have framed this as his way of showing the people that they can be more than what they were allocated. Instead it plays out as him hastily throwing more people at his brother in the hope that he will wind up dead.

We’re now at the point where members of the Inhuman society are starting to plot against him but I still don’t get the sense that most of the population are unhappy with him as a King so I would really like to see that play out when Black Bolt returns. It would be an interesting twist to have the society rebel against the rightful King because they have seen a better way. Of course for that to have the required weight it would have to be something that the show explored to some degree before this point but there is little hope left for a satisfying resolution. 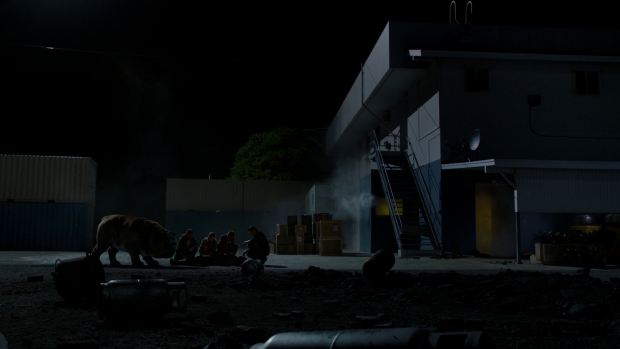 Can we speed up this mourning please? I’ve got things to do!

Another misfire that fails to create any sense of sympathy for the Royal Family. Medusa still feels justified in her racism, Black Bolt’s motivations are all over the place and Crystal is still a bratty princess so there is nothing to latch onto here. There is potential to explore the reasoning behind assumptions and the fact that one bad example doesn’t represent the whole but these things are barely mentioned before moving on.

Karnak and Gorgon made for an engaging team-up which makes it even more irritating that the show waited this long to allow this to happen. Having this taken away by Gorgon’s death is baffling even if the story reason for it is clear. The problem is that it completely lacks weight as the episode moves onto the next thing. Maximus being in full fascist mode removes most of the nuance associated with his character in prior episodes and leaves little hope for a satisfying resolution.