Marvel’s Spider-Man continues with Peter Parker’s first day at a new school and two villains for him to contend with as Spider-Man.

The first episode brought us the Vulture and this episode begins with Peter taking on the Scorpion. It’s clear that this show has a bit of a villain problem so far as this is now two instances where classing Spider-Man villains have been used with next to no setup. The Vulture had some backstory that was quickly revealed through dialogue but Scorpion appears with no explanation and is stealing a large jewel for no clear reason. 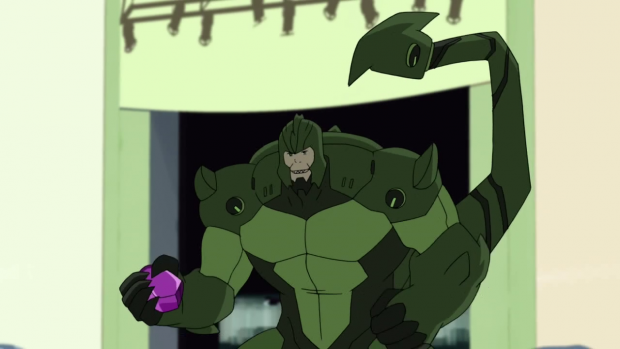 Villain motivations are important as it makes their presence worthwhile in the context of the story but Scorpion is essentially a blank slate with little to define him. A standard precious gem robbery would be fine if the villain had been previously established but his appearance here feels somewhat random.

He essentially exists as a reason for Peter Parker to be forced into making a choice between being on time for his first day of Horizon High and stopping a dangerous supervillain. It’s old hat as far as choices go for Spider-Man but it does keep reinforcing the sense of responsibility that Peter has essentially sworn an oath to and shows the impact his exploits as Spider-Man has on his civilian life.

The fight with the Scorpion is impressive to look at with lots of location changes and fast paced action. I like the design of the Scorpion as well; he looks large, imposing and very threatening. This doesn’t match up with how easily he is defeated and the method of defeat isn’t particularly interesting or clever. Brute strength is what solves the problem rather than Peter using his intelligence to come up with a strategy. The fight does tie into the theme of learning in some way as Peter’s web cartridge shatters on impact and puts his life in danger which forces him to improvise a solution. That solution basically amounts to using his other web shooter which isn’t that clever though it does show Peter’s ability to react to a crisis. 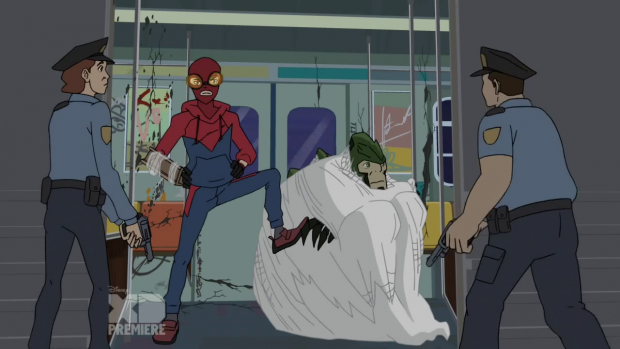 The shattered cartridge shows that there’s still a lot of work to do in perfecting his tech as well as his skills. He only ends up in that situation because he uses his card on the subway rather than leaping over the turnstile. It’s good that he respects the law but speeding things up considering the life threatening situation would probably be forgivable. It’s all fine for now since he’s still learning but there could have been a better way of approaching it.

A Spider-Slayer takes the other villain slot for the episode and the design is really impressive. It looks artificial and imposing and clearly challenges Peter though the defeat is another example of not using his intelligence to solve a problem. As with the Scorpion this suggests a problem establishing villains and creating situations where Peter’s intelligence is his most powerful asset.

The interesting thing about the Spider-Slayer is that it’s controlled by Spencer Smythe (Ben Diskin); a teacher at Peter’s old school which is completely expected since he is constantly abrasive, has a vendetta against Horizon High because they chose Harry Osborn over his son and he was known for building those things in the comics. It’s interesting because it creates a connection between Peter and Smythe as a villain. He is essentially stuck between Smythe’s vendetta with Horizon and Harry while also knowing Spencer’s son Alistair (Jason Spisak) who historically follows in his father’s footsteps but doesn’t necessarily have to. It’s a good basis for a villain story that so far has plenty of potential though Spencer could definitely be more complex than the obviously evil personality he has now. 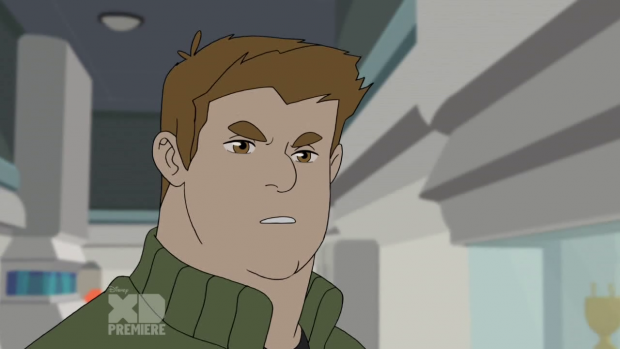 Spencer’s plan appears to be discrediting Harry so that Alistair can take his place at Horizon. This appears to have somewhat backfired since Max Modell is carefully analysing the evidence before making any decision. Harry’s experiments do seem fairly suspicious though so there’s a layer of complexity in there that can be developed. His inventions remind me a lot of the Green Goblin‘s Pumpkin Bombs which has to be deliberate. It appears that Harry’s arc will be a fairly dark one since his father is creating a school that directly competes with Horizon which may involve Harry becoming slowly corrupted as time goes on. There’s lots to develop here.

Peter’s lesson for the episode involves learning the value of hard work and how that relates to real life. He overhears Aunt May (Nancy Linari) worrying about bills and considering taking a second job. Peter feels guilty about this as he is fully aware of everything his Aunt May has done for him over the course of his life. For him her taking a second job to support him is too much and he decides that he has to find some way to contribute. So far so standard but this show has a fresh take on the idea by having him work at Horizon High. At first he applies to be a janitor but Max Modell takes pity on Peter and clearly wants to nurture the young talent he has recognised so offers him the job as his Lab assistant so that he can contribute to the bills. Max’s first job for him is cleaning up the Lab after the Spider- Slayer attack while reminding Peter about the value of hard work and how it can help inspire him.

This links back to the Uncle Ben flashback where Peter is taught the same lesson. In this instance it relates to raking up leaves. Uncle Ben is honest with Peter about his reluctance to do so but also points out how it gave him a lucrative idea. It’s the same lesson but framed in a slightly different way and it works well at underpinning the theme of the episode. It also seems that I was right about the Uncle Ben flashbacks being a mainstay at least for now. Peter even points out that his learning curve as Spider-Man will be informed by the lessons his Uncle taught him which adds layers to the “With great power, there must also come great responsibility” doctrine that the character is famous for living by. It’s also an good way for Peter to accept greater responsibility in his life when it comes to taking care of his Aunt. 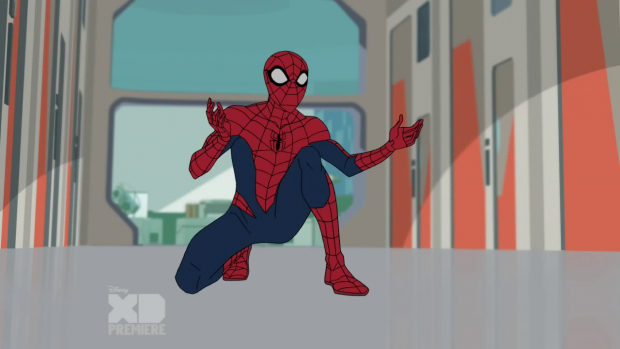 While this is going on there’s plenty of content in his first day at Horizon High. He meets other students such as Anya Corazon (Melanie Minichino) who clearly operate on his intellectual level. There is also mention of Gwen Stacy as a tease of what is to come but she is yet to appear. So far she has a reputation as being really full on which could be interesting when she is introduced. As for Anya her intelligence is clearly shown by her ability to invent revolutionary technology but also for her immediate recognition of Spider-Man’s voice as being familiar. Peter will clearly have trouble keeping his identity secret though his constant ridiculous excuses could get tedious for a while.

Anya’s recognition of Spider-Man’s voice is a repeat of the same gag started when Miles Morales (Nadji Jeter) hears the familiarity. It’s not a very funny joke especially since Peter reacts by putting on really bad deeper voices and doing things like speaking Spanish but it does highlight that he’ll have to be careful with his identity. I also like the fact that Miles Morales is part of the cast early on.

Horizon High is also important for Peter as he is able to work on his Spider-Man tech with the aid of vast resources. As such we get a home made costume that has some technical enhancements such as a Heads up Display and better web shooters. The costume looks good as well with it resembling the Spider-Man: Homecoming outfit more than a little. It’s recognisably Spider-Man and definitely animates well.

Peter also meets his adviser Doctor Otto Octavius (Scott Menville) who is reimagined to be around the same age as Peter -possibly younger-. The dynamic so far works well as Octavius seems less than impressed with Peter’s tardiness. They will likely become a foil for one another though it is too early to tell. I did enjoy the comedic foreshadowing with Octavius being too short to reach something above him. 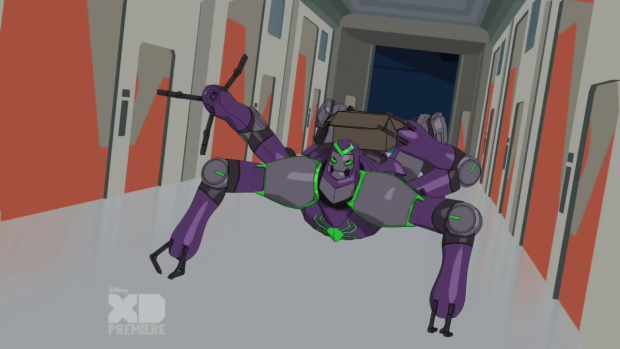 A solid continuation from a promising first episode. Good work is done continuing the themes that were established and expanding on Peter adapting to his responsibilities as Peter Parker as well as his exploits as Spider-Man. The lessons that Peter learns about responsibility and the practicalities of the real world are well framed with a solid connection between Max Modell as his living mentor and the lessons he learned from Uncle Ben growing up. The forward momentum on Peter’s new surroundings at Horizon High also work well as his relationships with other characters are slowly developed.

The show definitely has a villain problem as evidenced by the Scorpion appearing randomly with no setup to speak of. It’s a strange way to introduce a villain that visually requires some explanation. The Spider-Slayer is a little better because of what it represents in terms of the background elements. More work definitely needs to be done on how this show approaches villains and how they come to be defeated.