Marvel’s Spider-Man puts our hero as the subject of a vicious Reality TV show when Kraven the Hunter sets his sights on the wall crawler as he trains Miles Morales.

To its credit this episode wastes no time in getting started. It opens with a fast paced action sequence serving as a training session for the new Spider-Man on the block. They are working together to bring down the Scorpion and the two Spider-Men are bantering back and forth as they work together. It’s a good sequence with engaging if fruitless banter between the two. Peter makes wisecracks and Miles points out how sub par they are. Spider-Man has always been known for cheesy mid fight banter so it’s fun to have a peer call him out on this. This would have been a good opportunity for Peter to explain why he does this but sadly this doesn’t happen. The banter between them does serve as a solid reminder that Peter is just as young as Miles and is therefore easily distracted. 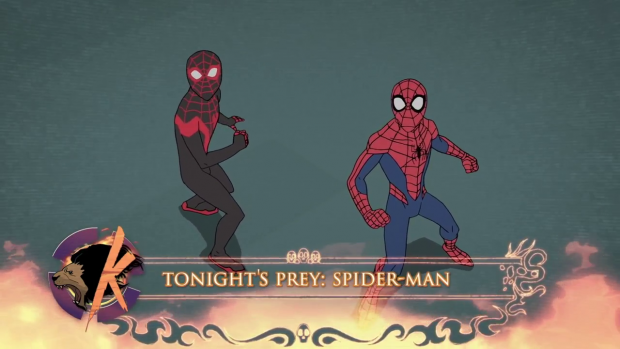 Not how Peter wanted to become famous

The Scorpion turns out to be a distraction to get Spider-Man into position to be hunted by Kraven the Hunter (Troy Baker) for his Reality TV show Kraven’s Amazing Hunt. Before I continue I’ll let it be known that Kraven the Hunter is among my least favourite Spider-Man villains for a variety of reasons so this might colour my critique of this episode a little.

I’ll credit the writers of this show with trying to do something different with Kraven. A reality TV show devoted to hunting nature’s most challenging animals is a good outlet for a character like Kraven as it gives him a built in motivation beyond an insane desire to hunt everything that lives. The problem with the execution is that I don’t believe that this is a show anyone would allow on TV. It is mentioned that he captures the creatures and kills them later; presumably off the air but the particular episode that he films in this episode has him hunt down two human beings using what amounts to lethal force. I imagine there are countless regulations on Television to protect against this sort of thing so the execution of the idea doesn’t quite work.

Kraven himself isn’t characterised any differently despite the fact he has a TV audience to cater to. Of course he does stop periodically to endorse products that he uses on his show because they sponsor him and the prospect of making an entertaining show is brought up more than once but he still seems to be a bloodthirsty hunter rather than an opportunistic TV star. The biggest issue with the character is that the episode couldn’t seem to decide whether he was an honourable hunter or a profit driven reality TV star. 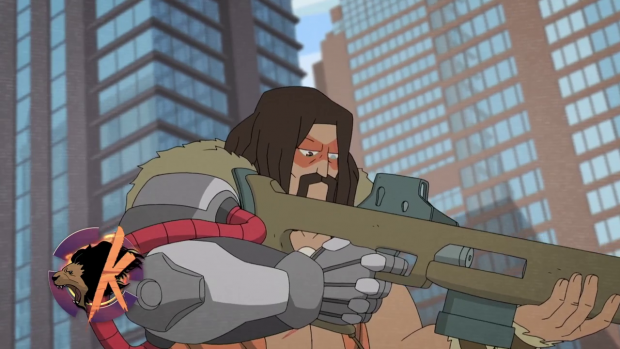 Connecting him to Norman Osborn doesn’t really work for me either as it means that he is behind every single scheme that has existed on this show in some way. As good as Norman is as a villain it starts to feel repetitive when it turns out he is always pulling the strings. If any character could be working on their own motivation it would be Kraven the Hunter so the Osborn involvement seems to be an attempt to pad out the running time of the episode. Adding scope to the show by having multiple villains with multiple agendas would be a better idea as having Norman behind everything and being frequently foiled makes him less effective as a villain.

Despite the flaws with the execution of the premise it was a very entertaining episode to a point. Framing the action as if it were being filmed using a combination of moving drones and fixed cameras was a nice stylistic touch and the numerous dangers allowed for a great deal of variety in the way the Spider-Men handled them. They spent most of the episode dodging obstacles but the way they were set up was really clever. 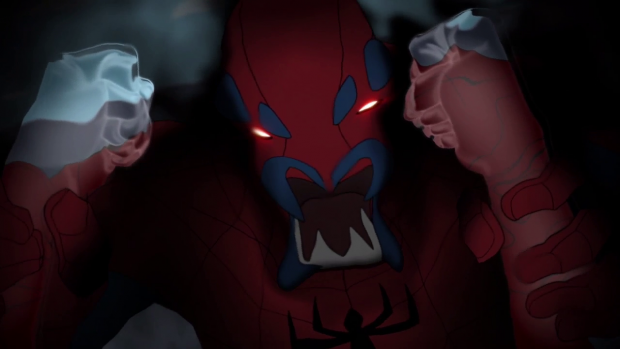 Kraven also proves to be a cunning foe when he is able to anticipate how Peter will react to a situation meaning that he is always one step ahead. He knows Peter’s movement patterns, has figured out his reaction times and learned how to predict what moves he will use in given situations. The presence of Miles throws confusion into the mix as he hasn’t been able to study him in this same way. Sadly the episode doesn’t really make use of that other than using Miles to surprise Norman at the end of the episode. Having a new Spider-Man around could have been a good way for Peter to figure out a way to beat Kraven and show how resourceful he is but the opportunity goes untapped.

I found the defeat of Kraven to be really weak as it went against what had been established about the character. He behaved carelessly which allowed Peter to surprise him with his webbing. Everything that had been previously established suggested that Kraven had anticipated everything -including tactics Peter wouldn’t typically employ but he didn’t anticipate the use of webbing when Kraven appeared distracted. It was a complete cop out and definitely didn’t work. Similarly being held captive in Norman Osborn’s secret lair was a completely unnecessary addition though it did allow Peter to deliver the lesson to Miles that even villains don’t deserve to die. I feel that it’s something that Miles should be aware of already but it works well enough as a moment of wisdom.

The most effective scene was when Miles was infected with a fear inducing toxin. It allowed for some great imagery when Miles saw distorted versions of Kraven and Peter thanks to the effects of the drug. Having him beat it when Peter revealed his identity as a way to show Miles that Spider-Man wasn’t something to be afraid of was a nice touch as well and is a real mark of trust on Peter’s part. There’s nothing between them now that the secret is shared and it could make their dynamic more interesting now that they are able to honestly discuss the problems they face being super heroes. Having the drug be the trigger for Miles’ cloaking ability was a nice touch as well. 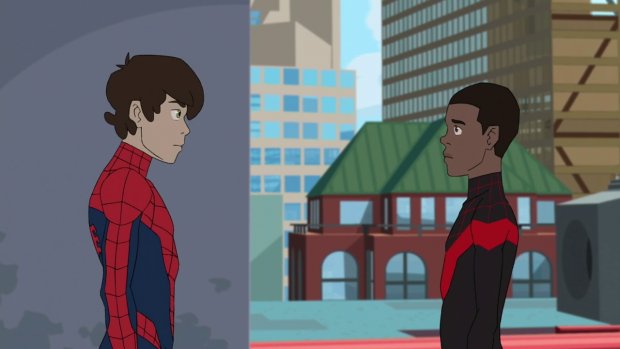 A solid if problematic episode that introduces a well known Spider-Man villain but is muddled in the execution. Having Kraven be a Reality TV star was a good idea in theory though it’s a TV show that I can’t believe would ever be allowed on TV. The episode can’t seem to decide whether Kraven is a money hungry opportunist or an honourable hunter either. It attempts to do both but doesn’t quite work. Using this as a training mission for Miles worked well as it allowed both of them to bond as peers and gets us to the point where Peter reveals his identity to Miles. The presence of Miles being the key to defeating Kraven was there to be exploited but for some reason doesn’t happen.

Similarly the appearance of Norman Osborn in the episode was unnecessary. The idea that Norman is behind absolutely everything is absurd and makes him a villain that is too easily foiled. Adding scope to the show by having different villains with different agendas would be a better idea instead of having everything be an extension of Norman Osborn’s plan.