Marvel’s Spider-Man puts Peter up against an ice based villain after a criminal steels Peter and Harry’s ice gauntlet and uses it for a one man crime wave.

This episode is very much a disposable stand-alone outing where Peter Parker does little more than fight a villain. That’s not necessarily a bad thing as many comic book stories are one and done with no real impact on any ongoing plot. 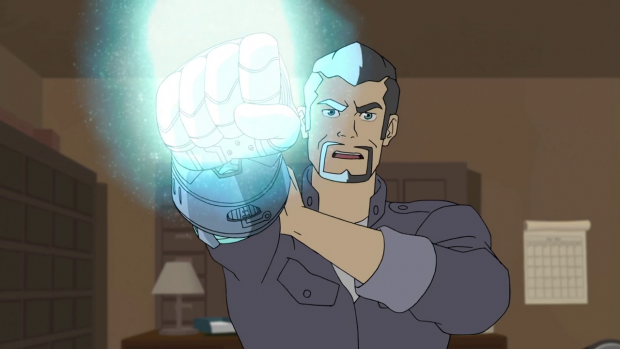 Of course this is a TV show so there’s a little bit of character development specifically when it comes to Harry and Peter. They have been collaborating on a freezing gauntlet which should prove that Horizon High and Osborn Academy can collaborate without any competition. Peter and Harry are friends so represent a better way forward for both organisations and their gauntlet is the physical evidence of that. They also develop it with altruistic intentions which is consistent with both of their characters as established.

The villain of the piece is Mackin aka Blizzard (Trevor Devall) and the most remarkable thing about him is that there is nothing remarkable about him. He is a henchman hired by Hammerhead and is responsible for low grade heists; he’s essentially the kind of villain that Spider-Man routinely brings down. This changes when he gets his hands on the ice gauntlet and takes on the identity of Blizzard; an ice based villain with puns that would make Arnie cringe. Spider-Man isn’t entirely innocent of delivering a cheesy pun or two but Blizzard has a torrent of them, each more ridiculous than the last. Usually I’m up for a selection of childish puns but this episode tested even my limits.

Blizzard is largely incidental in this episode. He exists to focus Peter and Harry’s efforts to solve a problem rather than being a fully realised character in his own right. He basically gets a taste of power then immediately becomes drunk on it which is a pretty standard as far as villain stories go and not really worth analysing. 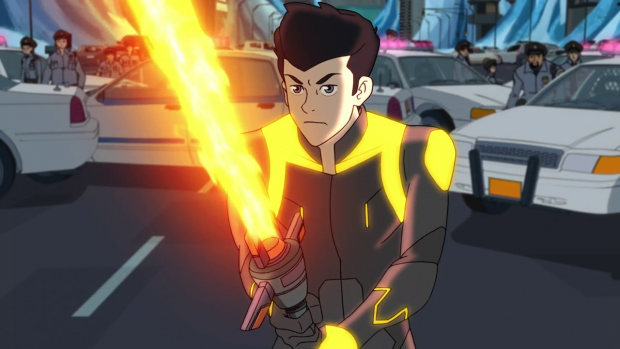 The Force is strong with Harry

Peter and Harry experience a difference of opinion on how to deal with the situation. Peter has the idea of building a heat version of the gauntlet to counter the stolen one which Harry gets to work on but builds a flaming lightsaber instead. I have to say it looks really cool but that isn’t really the point according to Peter. The principle of the ice gauntlet was to help people so a flaming lightsaber clearly goes against that. I suspect this is yet another hint at Harry’s obvious future as this show’s version of the Green Goblin but it also highlights a difference in the way Peter and Harry think. Peter is more about using science to help people and wants to remove any possibility for misuse where Harry is far more daring in his creativity. He has no problem creating weapons as he believes that he can use them responsibly.

There is an additional aspect to Harry’s motivation that comes from Peter getting the credit for stopping Mackin on one of his robberies. That scene was pretty painful to watch thanks to the hammy dialogue from the cops who praised Peter on his heroics rather than scolding him for getting in the way which is how the scene presents it. Harry’s jealous at Peter being celebrated for being a hero makes no sense given that he has been involved in helping Spider-Man bring villains down with his scientific skill and intelligence on several occasions. I wonder if this is setting up his transition to being the Green Goblin as being heroically motivated. It’d be good to see the Harry version of the Green Goblin as an alternative hero to Spider-Man for at least a little while. This show has been playing up how manipulative Norman Osborn is but I also think Harry is a strong enough character to make his own decisions at least to begin with.

In terms of visuals this episode was really impressive. The ice effects were really nicely done and Blizzard found a really creative way to use his ice powers. Seeing Harry and later Spider-Man wield a flaming lightsaber is also a really cool image and the action sequences were dynamic, exciting and varied in their execution. For a one shot villain Blizzard will be remembered because of the visual attributes if not for his personality. 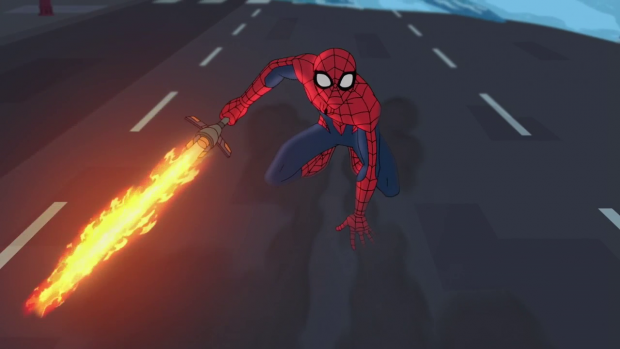 Spider-Man with a flaming lightsaber…awesome

A solid if somewhat forgettable episode that does some good work on the Peter/Harry friendship though makes some confusing choices such as Harry desiring to be seen as a hero. It does show that Peter and Harry have different ways of thinking and aren’t motivated by the same things but does so in a fairly clumsy way.

Blizzard is a visually impressive villain despite having very little personality and is involved in really excitingly dynamic action sequences with memorable imagery. He’s an interesting villain in that he is unremarkable by basically being a henchman drunk on power though his use of ice related puns would make Arnie cringe.