Marvel’s Spider-Man introduces the titular hero to a larger world when he meets Iron Man (Mick Wingert) at the Stark Expo.

There have been mentions here and there of the wider Marvel universe such as Stark’s name being mentioned more than once and a name drop of the African Nation of Wakanda but this is the first time that Peter has come into contact with another superhero. 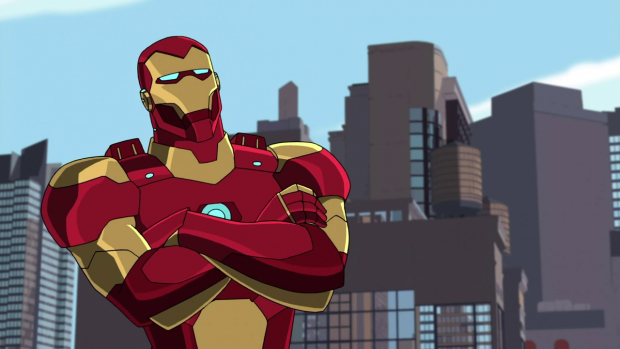 “Why is that important?” I hear you ask. Maybe it isn’t but crossovers have always been beloved by comic book fans and now moviegoers if the box office figures for Marvel’s cinematic efforts are to be believed. The prospect of Spider-Man teaming up with Iron Man or any other well known hero is always going to be exciting to someone so these things continue to happen.

It’s smart of the writers to leave this until the 8th episode of this new Spider-Man adaptation. This left the show plenty of time to establish its own world and Peter Parker’s place within it and lets him solve problems on his own without relying on the intervention of more experienced heroes. Maybe the introduction of Iron Man could have been left a while longer but it doesn’t feel like it comes too early in the lifetime of the show.

Iron Man is a good one to start with for this particular version of Spider-Man because this show focuses on Peter Parker as a scientist who uses his knowledge to enhance his heroics. Tony Stark represents everything that Peter Parker wants to be. He’s a genius, rich, successful, confident and has found a way to balance his personal life with his superhero life. His presence brings Peter face to face with the personification of everything he’s working towards and their interactions highlight how far Peter still needs to go to reach that same level. 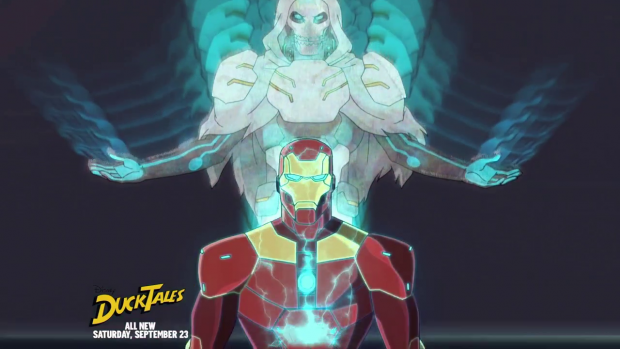 The Ghost makes his move

The characterisation of Tony Stark will be familiar to anyone who has watched the films. He’s arrogant yet likeable and can back up his confidence with proof that he is as good as he says he is. He effortlessly transitions from being a serious hero to ably lapping up the attention his celebrity affords him and his intelligence is clearly on display throughout. Tony Stark is seen through the eyes of Peter Parker which does make him so much larger than life. Considering he is someone that Peter aspires to be that makes complete sense.

He is also shown to be respectful of Peter’s secret identity as shown through dialogue that all but confirms the fact that he has figured out that Peter and Spider-Man are one in the same. Not that it’s especially difficult in this show but Stark uses the available evidence to draw the conclusion but lets Peter think that he doesn’t know the truth showing that he perhaps respects Peter’s right to privacy and trusts that the public will learn the truth when Peter is ready to tell it. Stark is also shown to be impressed with Peter Parker’s intellect and encourages him to improve his physical prowess so that people don’t subscribe to the stereotype of intelligent people lacking in physical attributes. It’s a very small but very important lesson that Stark imparts and it shows that he intends to keep an eye on Spider-Man but wants him to figure things out on his own. This establishes him as a mentor figure who keeps himself at a distance.

The villain of this episode is one of Stark’s former employees who goes by Ghost (Jim Cummings) and wants revenge against Stark for ruining his livelihood. His abilities are really impressive with tech driven intangibility that leads him to corrupt some of Stark’s tech in order to control all surrounding technology. He’s very underdeveloped as villains go but enough is delivered about his origin to make it work for the purposes of the episode. He does represent a significant threat for this show considering how much of a reliance most of the characters have on science and technology. Turning that against them is a major issue that offers a challenge for all concerned. 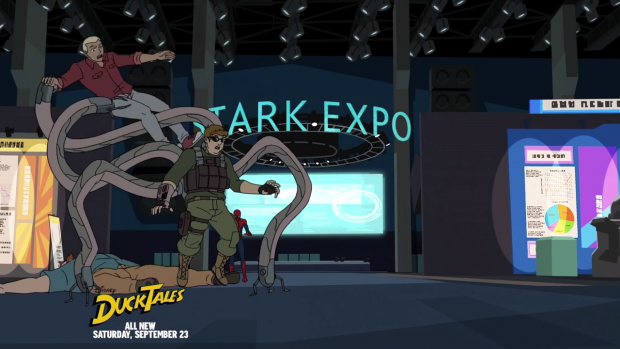 I can see where this is going

Ultimately Peter has to bond with the symbiote once again in order to put himself back in the fight. It can’t be controlled because it isn’t technology but there is a cost to using it for Peter who quickly becomes corrupted once again. I’m glad that the symbiote was used again because the use of it was very rushed in the previous episode though this episode didn’t actually add anything to it. The only purpose its appearance served was to prove that it’s alive to Max Modell who didn’t believe it previously. Tony Spark inspiring teamwork and helping Peter to realise how important his morality is to remove the symbiote was a nice touch and shows how much Stark values the contributions of others to achieve a common goal. How the symbiote will be used now that it has been deemed far too dangerous is anyone’s guess but we definitely haven’t seen the last of it. I also liked the potential foreshadowing to Flash Thompson’s bond with the symbiote

This episode also foreshadows Doctor Octopus by showing Octavius wearing a harness of 4 robotic limbs that are out of control thanks to the Ghost’s interference. He comes to the conclusion that interfacing them directly with his brain removes the risk of outside influences controlling them but Max refuses to support further study. This allows Norman Osborn to poach him for Osborn Academy to further develop the technology. It looks like the writers are playing up the rivalry between the two schools with Norman Osborn playing those affiliated with Horizon High against Max Modell.

Norman Osborn continues to be a great character who manages things very closely while also keeping his distance. Tempting Octavius is one example of that and the way he is slowly corrupting Harry is interesting as well. Harry insists that he and Peter are friends though Norman encourages him to see Peter as competition. It’s early days yet but it’s clear that Harry will slowly come around to Norman’s way of thinking. This can be seen by him eventually agreeing with Norman’s point of view regarding entering the glider he invented in the Stark Expo. At first he feels shunned but later realises that keeping it a secret prevented it from being used by the Ghost.

Of course Norman has other ideas for Harry’s tech. He sees Spider-Man as something of a mascot for Horizon High and hopes to create something similar for Osborn Academy. The glider tech suggests that this will eventually lead to the Green Goblin who will represent Osborn Academy in some way. I could see this working really well as it would enhance the connection between the two schools and Spider-Man while also establishing a villain for Peter to continually deal with. If Harry takes on the mantle it will also continue to drive a wedge between him and Peter. 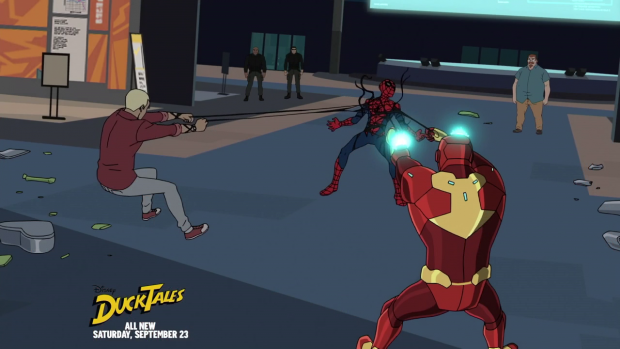 A great episode and an appropriate introduction for Tony Stark who serves as the personification of everything Peter would like to be. Their interactions suggest a mentor/mentee relationship with Stark keeping his distance so that Peter can learn the lessons on his own. It’s clear that Stark respects Peter as Spider-Man and sees a lot of potential in him. Norman Osborn manipulating people in his own sinister way is always great to see too.

The episode doesn’t handle the villain as well as it could have though his motivations were spelled out enough for the purposes of the story. I also felt that the symbiote was a little tacked on and lacked any real sense of purpose beyond Max Modell realising it was alive. It will definitely be seen again but perhaps wasn’t required here.