Marvel’s Spider-Man moves the background Venom symbiote story to the front and explores Peter’s relationship with the alien creature.

Peter’s time wearing the black suit has been explored a number of ways. Spider-Man 3 told this story, the 90s Spider-Man cartoon had its own version of it, Spectacular Spider-Man dealt with it in its own way and Ultimate Spider-Man also had a take on it. That doesn’t even factor in the various comic book versions of the symbiote story that have cropped up over the years. 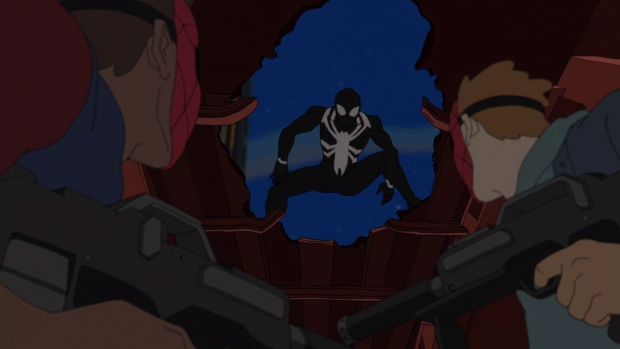 This depiction is along similar lines to Spider-Man 3 with the symbiote affecting Peter Parker’s personality to a noticeable degree. Peter is portrayed as being really annoying in this episode. He wears hipster style glasses, uses embarrassingly irritating non words like bruh as well as shortening words that don’t need to be shortened. It’s an amusingly embarrassing characterisation that makes a lot of sense in the context of the symbiote amplifying aspects of Peter Parker’s personality. The alien grants him improved confidence but that comes with a lack of self awareness. He is essentially trying to be “cool” as he thinks that will translate into people thinking he’s “cool” but Peter Parker has no frame of reference for what “cool” might be to other people so comes across as something of a dork. The reaction of those around him tells us everything we need to know about how welcome his new attitude is but Peter lacks the self awareness to notice those reactions so keeps acting this way.

It also affects the Spider-Man side of his life by increasing his arrogance about how great he is as a super hero. He is more effective at fighting crime and this definitely goes to his head as he feels that he is completely unstoppable while also being able to do no wrong in the eyes of the law. This is shown by his unprovoked attack on a recently released Vulture. He sees him flying through the sky and automatically assumes that he must be up to no good so goes on the offensive without assessing the situation first. Admittedly this is something he might have done pre-symbiote but he would also have shown more remorse when it became clear that he had made a mistake. It’s a good scene that shows Peter still has a lot to learn when it comes to what constitutes breaking the law.

The symbiote also clearly affects Peter by making him more aggressive as Spider-Man. This is clearly addressed when he fights Alistair Smythe as the Vulture at Horizon Labs when he delivers a brutal beating after the point where Smythe would seem to be defeated. Max Modell reacts with horror at Spider-Man’s behaviour which proves to be the start of a

call for Peter that is reinforced when the symbiote lashes out as Harry. He hadn’t been challenged before then so didn’t realise that his methods might be too extreme but starts to realise once it is pointed out to him. 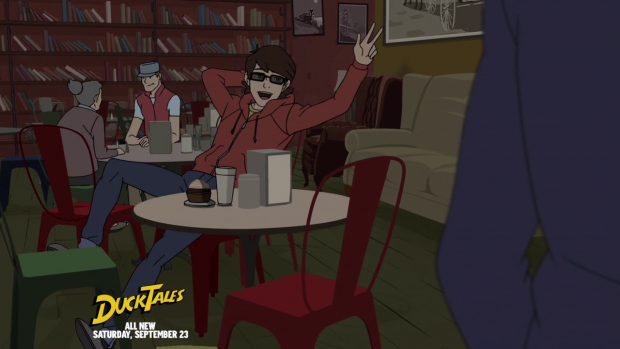 What Peter thinks cool is

This results in a literalised internal conflict for Peter as he fights to remove the symbiote. Naturally it doesn’t take rejection well and fights to keep a hold on him. This part of the episode is somewhat ridiculous as he punches at the black goo when it drags him around New York City. I see what they were going for but it didn’t translate very well in a visual sense.

Another issue is that everything happens far too quickly. Peter goes from being drunk on the benefits of his augmented abilities to being terrified of the threat the alien represents in a very short time which means that it doesn’t quite sink in. Previous adaptations have told this story over multiple episodes so this problem might have been fixed by taking a similar approach. Having an entire episode focused on how much the suit was corrupting him might have made for a stronger story overall.

Peter’s change in attitude as a result of the corruption by the symbiote does pay off well when he returns it to Horizon and admits to Max Modell that he had it all along. This results in Peter being punished therefore salvaging something from the rushed plotting by delivering consequences for Peter’s actions. Unfortunately the consequences don’t really seem that severe and it’s bizarre that Max doesn’t figure out that Spider-Man was using the V-252 as a costume considering how easily Adrian Toomes seemed to conclude this. Max should be drawing connections between Peter and Spider-Man by now but he still isn’t and that is starting to become frustrating. 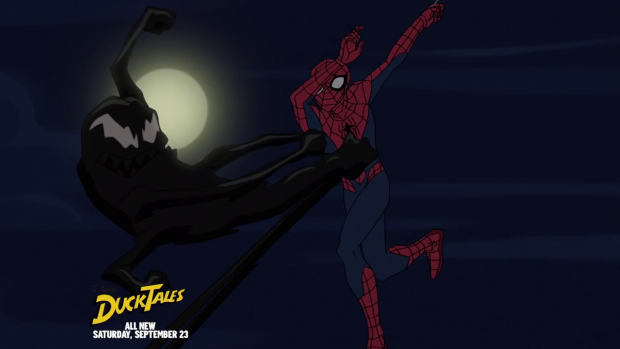 The symbiote ties into the ongoing rivalry between Osborn Academy and Horizon High in really interesting ways. Norman Osborn hires Adrian Toomes because of his former connection to Horizon High, This proves to be useful as Norman is given information about the V-252 and goes about acquiring it for himself. The acquisition of the Vulture tech clearly proves useful to him as well and may inspire the Green Goblin tech in some way. Toomes is also able to confirm that the V-252 was discovered by NASA and donated to Horizon therefore establishing that it is an alien life form rather than being created in a lab.

Alistair Smythe becoming another Vulture was a nice touch as it demonstrates an ability on the part of the writers to play around with established comic book characters in interesting ways as well as showing the impact Norman Osborn’s acquisitions has on super villains in New York. As always Norman Osborn seems shrewd and in control.

The strongest scene was when he engineered a scenario where Spider-Man would be forced to give up the symbiote and turn it over to him. He frames this as an attempt to help him remove the alien parasite from his body and store it safely. It’s something that seems to appeal to Peter who is desperate to be rid of it. Thankfully the Vulture sonic scream tech is exactly what is required to force the symbiote off Peter who then steals the containment tech before Norman can take control of it. This shows that Peter is learning and rightly doesn’t trust Norman Osborn. Of course Norman now knows what Horizon has and what it’s capable of so it won’t be the final attempt to take control of it. As a side note, I wonder if the animators of this show are big fans of Ghostbusters. Peter used a device that looked similar to a proton pack in the previous episode and this episode featured devices that looked a lot like a PKE meter as well as a Ghost Trap.

Despite the rushed nature of the plotting there is a hint that the threat of the symbiote will return when Peter leaves it in Max Modell’s hands. He assumes that Max will look at his research and reach the same conclusion but it’s entirely possible that this won’t happen and Max will see it as an acceptable risk to continue working with the V-252. Peter’s closing thoughts assume that Max is automatically a better option to leave it with than Norman Osborn but the potential for that not to be the case exists and would do a lot for Max’s character by adding layers to him. 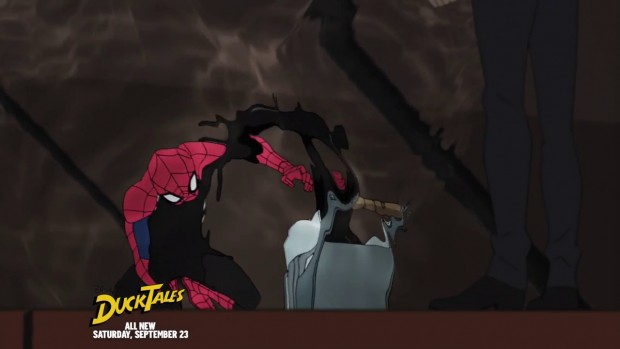 Sir, what you had there is what we refer to as a focused, non-terminal, repeating phantasm or a class-five full-roaming vapour. A real nasty one, too.

An uneven episode that depicts Peter’s change in personality when bonded with the symbiote really well. Seeing how this impacts his time as Spider-Man also works well in how his crime fighting changes. The corruption shown by him leaping to conclusions when seeing the Vulture and delivering more brutal beat downs to villains is also interesting if really on the nose. I also liked how this tied into the ensuing rivalry between Osborn Academy and Horizon High as well as showing how shrewd and intelligent Norman Osborn is.

The episode falls down by rushing through this particular plot. Peter’s transition from enjoying his augmented abilities to being terrified of what the symbiote represents happens far too quickly and the whole thing feels resolved too quickly. Peter’s battle with the symbiote as he tries to separate himself from it also seems too silly when visualised.