Peter Parker finds out he isn’t only Spider Powered hero in town when Marvel’s Spider-Man brings Miles Morales into the enhanced community.

This show presents a unique dynamic between Peter Parker and Miles Morales. In the comics Peter started out as Miles Morales’ absent motivation and later became more of a mentor as it became possible for them to interact. In this show they are very close in age so start off as peers. Peter’s limited experience as Spider-Man allows him to be a mentor for Miles in that capacity though his lack of experience means he is prone to make mistakes as a teacher. It’s an interesting dynamic that allows for many possibilities. 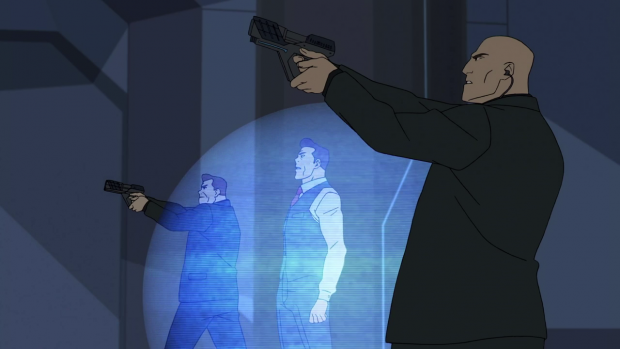 As the episode opens we see Miles being bullied in his neighbourhood followed by him expressing frustration that he lacks the physical prowess to stand up to the bullies. His father tells him that his intelligence is his greatest asset but Miles only sees a physical solution working in this situation. His arc for the episode involves him learning that there are alternatives to physical conflict but he still has a long way to go towards getting there.

Once he is bitten by the spider and gains a slightly different version of Spider Powers he becomes somewhat drunk on what he can now do. A collection of examples of him attempting to help others are shown with the common theme that he has misunderstood the situation. An attempt to help an old lady cross the street leaves her on the wrong side of the road with her shopping destroyed for example. Miles has the best of intentions but also has to temper his overconfidence and learn that there is skill involved in being a superhero. His initial attempts to help people are doing more harm than good so he needs to realise that there is a learning curve.

Naturally Peter is the one to help him realise this as he has been working to come to terms with learning how to be a more effective superhero. He makes far less mistakes than he did initially but he clearly still has a long way to go. This makes his status as mentor to Miles somewhat problematic as he hasn’t learned some of the necessary lessons that Miles will have to learn. It may transpire in later episodes that he gives Miles bad advice and it results in some form of catastrophic accident. This doesn’t happen here as Peter is portrayed as being the voice of reason and experience which I find to be a little premature given the circumstances.

Miles makes other mistakes outside of the ill conceived attempts at heroics mentioned above. He gives away his home neighbourhood live on TV which gives dangerous people a really good idea of where to attack in order to get to the new Spider-Man on a personal level, he also makes the mistake of telling his classmates about his powers. This starts with him telling Peter who hilariously reacts as if he believes that Miles is the original Spider-Man. This works because he is genuinely shocked that Miles has powers but also remembers to safeguard his own identity. 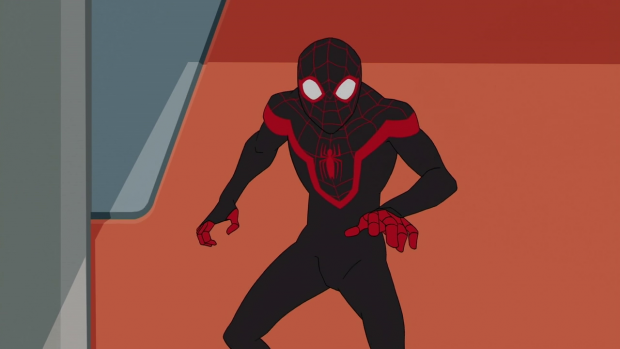 A new Spider-Man in town

He also tells Gwen and Ana who question the possibility of creating more Spider Powered people. Considering both characters become variations of Spider-Woman in the comics then it works as a wink to the audience as well as a valid question on the ease of gaining these powers. It’s something that the show will have to address at some sage as the prospect of everyone bitten by these spiders gaining powers suggests that Peter Parker is less special since pretty much anyone could be Spider-Man. Peter Parker’s uniqueness has always been one of his more interesting traits so this would downplay that somewhat. It’s definitely too soon for Miles to be given powers.

Miles learns an important lesson about keeping his identity secret along with Peter’s lesson about power and responsibility. We see him trying to take revenge on the bullies in his neighbourhood and realising how empty it feels to use his powers in that way. It’s a practical lesson and handled well while also keeping with the overall theme of youth and learning.

The appearance of a second Spider-Man helps Norman Osborn confirm the theory that he has. He thinks that an army of Spider Powered people is on its way to oppose him in some way so the appearance of another Spider-Man so soon after the original confirms this in his head. He lacks the knowledge of the accidental nature of the abilities being granted and the fact that the incidents are somewhat unconnected but it’s a reasonable conclusion given the available information for him.

Norman continues to be an excellent villain in this episode. His immediate force field when Spencer Smythe’s Spider Slayer attacks him is a really nice touch as it shows how fearless and well prepared Norman is. The way he uses Spencer’s son to get to him by way of engineering a fight between their Spider Slayers further shows how devious and calculating he is. The main reason Alistair Smythe is enrolled as Osborn Academy is to create leverage against Spencer for Norman and he has absolutely no qualms about using family members against each other. This is further confirmed by the reveal that he tasked Spencer with framing his son presumably to get him away from Horizon. Norman is devious, uncompromising and definitely not held back by emotional connections.

Spencer Smythe’s presence in this episode creates a third faction in this growing conflict. Horizon and Osborn Academy make up the other two and it turns out that Smythe has gained an ally in the form of Raymond Warren. This adds complexity to the conflicts and shows that allegiances are very important in this show. There’s a lot of scope for these to shift and the conflicts to become more heated as a result. 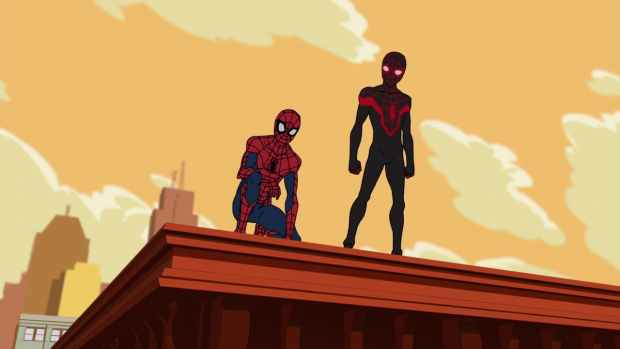 Another solid episode that gifts Miles Morales with his powers to shake up the dynamic between him and Peter. Miles makes plenty of mistakes upon getting his powers and learns important lessons from them. Peter serves as a mentor but only just since he is the same age and has only had his powers for a short time. Hopefully we will see Peter giving bad advice in the future to show that he isn’t ready to teach. Norman Osborn continues to be a great villain as shown by him using Spencer’s son Alistair against him as well as freely admitting that he arranged for Spencer to frame Harry for his own purposes.

Miles getting his powers this quickly presents a problem. The issue is that Peter hasn’t been Spider-Man for that long meaning that he has had limited time to hone his own skills before becoming a mentor. The presence of a powered Miles Morales takes away from the uniqueness of Peter Parker and opens up another set of questions surrounding the ease of getting Spider Powers. This could all be fixed in later episodes but it does feel too soon to be expanding the roster of Spider powered heroes.