Marvel’s Inhumans reaches the halfway point and starts to work on reuniting the characters as Maximus moves forward with his plan.

I mentioned last week that Medusa was one of the stronger characters in that particular episode. That really isn’t saying much but she did have one genuinely emotionally resonant moment that set her apart from all the rest. This week she strikes up a reluctant partnership with Louise who starts to get some definition of her own. Watching these characters interact was the most entertaining part of the episode by far because of their pseudo antagonistic relationship. Medusa demands that Louise do things for her and threatens her when she protests so it doesn’t exactly establish her in the best light. 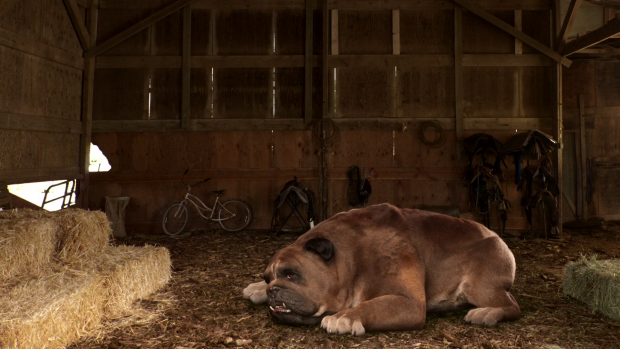 Despite the fact her life is at stake, Louise isn’t someone to let herself be pushed around without at least complaining about it first. She is assertive and very vocal when it comes to making sure that Medusa knows what is and isn’t possible. Their interactions also provide an opportunity to explore Louise’s motivations. She keeps a toy rocket ship on her at all times because it contains her father’s ashes and reminds her of his desire to go to the Moon without ever getting there. She is motivated by a desire to fulfil her father’s dream. That’s partly why she works for a privately funded company looking to construct a habitat on the Moon.

I find Louise to be really endearing despite the fact that her character largely exists for nuisance value and really seems to be a riff on Arrow‘s Felicity. She’s certainly more likeable than any member of the Royal Family and gives the show a much needed relatable edge. This is something fundamental that it has been lacking up to this point.

Some of her conversations with Medusa were bafflingly awkward. Specifically the conversation about marriage which seemed to imply that it was the only option as far as Medusa was concerned. It doesn’t seem to occur to Medusa that there is any other option. Louise points out that she isn’t married because she has never been asked. Ellen Woglom’s performance is great in this scene as she plays Louise as almost mocking Medusa for her limited way of thinking.

Louise also points out that she quite likes being alone which leads to a flashback involving young Medusa (V.IP.) and young Crystal (Leila Bootsma) dealing with the fact that her parents were banished -read killed- for something that they did. Medusa doesn’t know what it’s like to be alone as she has always been responsible for someone be it Crystal or the people of Attilan. In many ways Louise represents a freedom for Medusa that she has never experienced and there’s a sense that her mind is being opened ever so slightly. 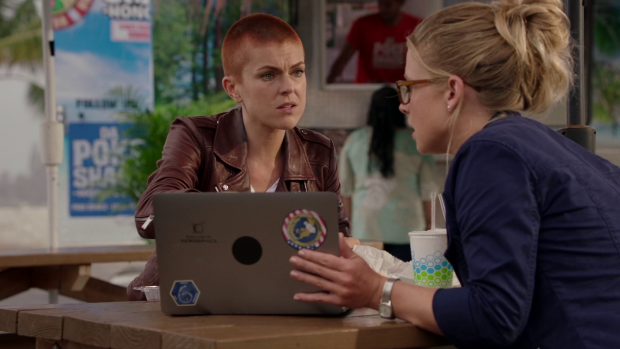 Medusa’s backstory is somewhat confusing as it’s very unclear what her parents were “banished” for but apparently involved standing up for their ideals in some way. It would help to know what that was as it would enrich the mythology of the show but maybe this will be fleshed out in later episodes. Either way losing her parents informed the person Medusa is in a big way. She became responsible for looking after Crystal at a very young age so was thrust into a position of parental responsibility which may make her slightly resentful in some way.

Unfortunately the flashbacks are very unclear and offer no deeper insight than a few lines of dialogue would provide. Nothing about the flashback scenes is in any way insightful though we do see that Black Bolt’s parents are responsible for her losing her parents which raises even more questions. Does this cause any friction between her and Black Bolt or does she not associate his parents actions with him? There’s something there to be explored but the show doesn’t seem to be interested in this.

Medusa does eventually admit that she likes Louise and seems more willing to treat her like an equal which obviously makes Louise more willing to help her. Louise seems to find the experience fulfilling despite being ordered around and threatened by Medusa. It’s a good dynamic and starts to humanise Medusa a little by showing that she is able to change her way of thinking.

Black Bolt is much improved from last week despite still being led from place to place. This episode handles him a lot better as there are more opportunities for Anson Mount to show the more measured and regal side of him. His scenes with Dr. Evan Declan show that he is uncompromising in how he goes about accomplishing his current goal of finding his wife. Obviously he has no choice but to go along with Dr. Declan’s plan at first considering how limited his options are but he is certainly better able to make his intentions clear. There is more discussion of how powerful he is but we don’t see him -or anyone else outside of Crystal and Mordis- use any powers. I did like the scene where he reunites with Medusa is actually fairly well done with bot actors doing a good job at showing the shared affection between them. 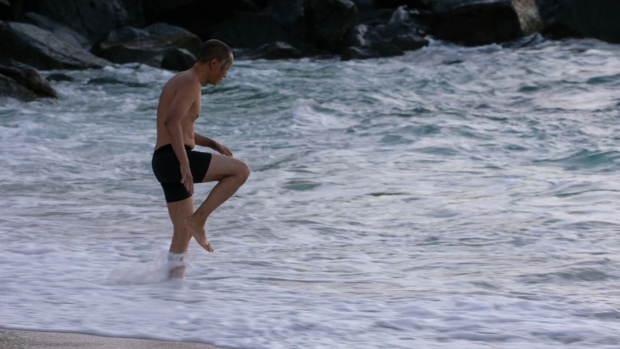 It helps that Dr. Declan seems to be an honourable man who wants to learn more about Inhumans while also wanting to help them. He makes it clear upfront that being studied is optional and that Black Bolt is free to leave whenever he wants. Naturally he does because being studied won’t help him find Medusa but not before Dr. Declan gets to do some work and be really excited about how perfect Black Bolt’s genetic structure is. He has really lofty ideals about how this can be used and wants to find a way to pretty much cure all disease to create a utopia free of tragic death. It’s a little too idealistic but Henry Ian Cusick’s performance makes it more or less work.

The biggest surprise is when Dr. Declan is in contact with Maximus though it’s clear he doesn’t really know who he is or what he’s actually up to. This conversation raises questions about how Maximus has been able to gather all of these resources on Earth when he has apparently never been there. The conversation does allow Maximus to modify his plan and gives him hope towards claiming his birthright of being Inhuman. He feels robbed of the same pleasure the rest of his family were granted and it’s easy to say why. It was a cruel joke that going through Terrigenesis made him completely human and he has been punished for it by the rules of his society. Dr. Declan’s research gives him hope that he can manipulate his own genetic code to try Terrigenesis again and perhaps achieve a different result.

It definitely isn’t the intention of the writers but the more I see of Maximus the more I agree with him. he is living in a broken society that doesn’t accept him and he wants to fix it. He’s the most relatable and sympathetic character in the show. What I don’t necessarily agree with is his methods. Killing the Genetic Council isn’t really an acceptable way to behave because killing is wrong  though I do understand why he did it. Essentially the Genetic Council put unreasonable limitations on him for no explained reason and Maximus takes it upon himself to retaliate.

It also helps that Iwan Rheon’s performance continues to be first rate. He’s arrogant yet shows empathy for his people. I loved the scene where he talks to Auran and shoots her down for trying to take some of the credit for his plan. Scenes like this show a mean streak but for the most part he seems to be doing what he’s doing for the good of his people. I am curious about Auran’s motivation as she seems very committed to Maximus’ plan but it’s unclear why that is. 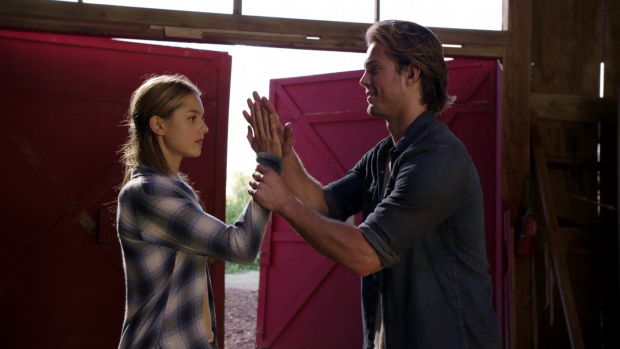 Turns out that people are actually people…

I’m still unsure why I’m supposed to side with the Royal Family as the show doesn’t give me a reason to do so. It could be argued that this show is bad bourgeois propaganda as it keeps promoting the message that cultural elitism is the right way to do things though doing it in a way that makes the counter arrogant seem more attractive.

There’s very little to say about Gorgon and his legion of Surfer Dude Soldiers TM other than Gorgon is starting to see the value in human beings which means that the show wants to celebrate the fact that Gorgon is slightly less racist than he was before. It’s baffling what the writers seem of this show think engaging character development is.

Karnak is similarly doing very little other than helping out on the Weed Plantation. There’s talk about how efficient farming has to be on Attilan which suggests that he is finding a place for himself though it’s all fairly weak. Equally terrible is the forced relationship he has with Jen (Jamie Gray Hyder) that comes from nowhere and doesn’t work on screen at all.

Crystal spends her scenes ordering the guy who hit Lockjaw to do something about it. His name is Dave (Chad James Buchanan) and he’s pretty uninteresting as characters go. He calls his ex girlfriend Audrey (Liv Hewson) who just so happens to be a Vet -or Doctor it’s unclear- in training to heal Lockjaw which leads to endless scenes of them sniping at each other because they used to be a couple. It’s painful to watch and feels unnecessary since neither of these characters are needed in this show. Dave does apparently make an impression on Crystal who does begin to see him as a person rather than a resource by the end of the episode but none of it makes Crystal any more sympathetic. It should be noted that at no point does she cradle Lockjaw to show any concern for him and she seems more interested in his teleport ability being restored. 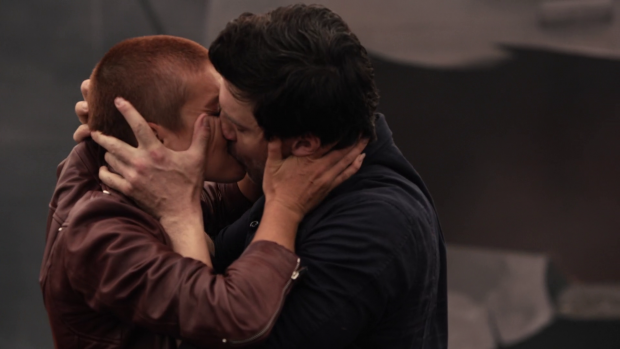 Another misfire that fails to make the Inhuman Royal Family in any way sympathetic. Black Bolt is handled better and there’s a sense of progression to Medusa who learns a lot thanks to her interactions with Louise who helps to humanise her as well as bringing her own relatable edge. Gorgon, Karnak and Crystal completely fail to be engaging in scenes that seem to do little more than fill time.

Maximus is the most engaging and sympathetic character that the show has. The more I see of him the more I agree with his point of view even if his methods seem slightly extreme. Iwan Rheon’s performance is routinely excellent as it brings lots of nuance to the character. Another advantage the show has is Dr. Evan Declan who is well acted and charmingly idealistic. I’m not sure there’s enough time left for this show to produce anything satisfying.