Marvel’s Spider-Man takes Peter on a spookier than normal adventure when he encounters a Werewolf on the way to the Horizon Halloween party.

An interruption to a “normal” activity has been the opening of so many Spider-Man stories. It works so well because it adds an air of tragic regret to the life of Peter Parker. He misses out on so much because he’s too busy protecting people as Spider-Man. It typically causes friction between Peter and his friends because he’s seen as unreliable. It has been the root of so many Spider-Man stories as it’s an easy way to get the audience to sympathise with Peter Parker. 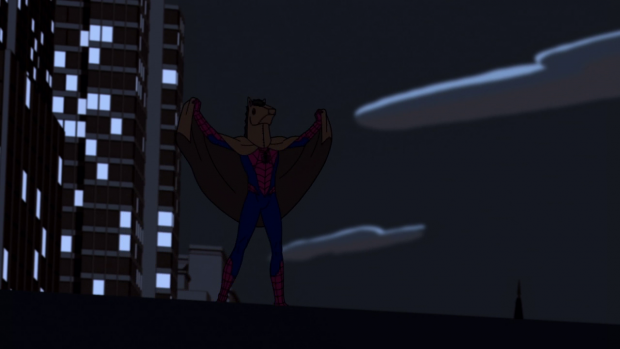 This episode opens with just that setup and does it really well. Peter is clearly excited about spending time with Harry and the rest of his friends at Horizon’s Halloween party. He and Harry are collaborating on a costume being both ends of a horse. Peter is the front and Harry is the back which I wouldn’t have expected considering the most popular of two friends normally wears the front end. It does say a lot about their friendship as Harry respects Peter enough to let him be the front of the horse. It also shows that this version of Harry lacks the arrogance that many other versions are known for.

Deeper insight is given into Harry Osborn and one of the reasons he and Peter are such good friends. According to him most people see him as Norman Osborn’s son but Peter sees him as his friend Harry which helps him feel normal. It’s clearly an important relationship to Harry and Peter learns this as Spider-Man which suggests this is something Harry would be reluctant to admit to Peter directly. It’s a great character based reveal that enhances the connection between Peter and Harry.

This episode is also notable because it allows Peter to team up with another Marvel super hero in the form of the Hulk (Fred Tatasciore). They both find themselves on the trail of a Werewolf and the presence of the Hulk creates an interesting dilemma for Peter. At first he thinks that the Hulk is more than equipped to deal with the problem and considers leaving him to it so that he have fun with his friends. He wrestles with the choice for a few seconds which shows that he is still struggling between his desire to live his life and his sense of responsibility. It’s forgivable because he is still coming to terms with his role as Spider-Man and the desire to shirk his responsibilities is common to youth. 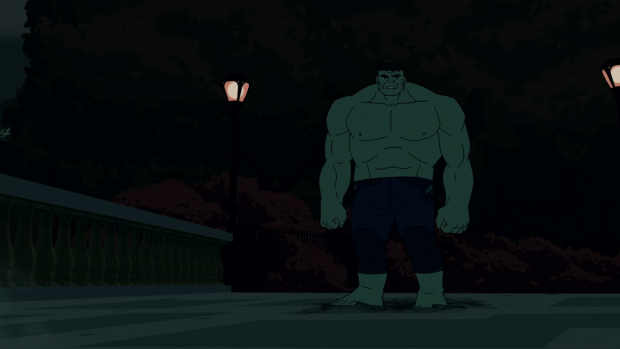 Ultimately he decides to help Hulk with the Werewolf when it turns out that it can drain Hulk’s strength which causes him to revert back to Bruce Banner (Kevin Shinick). This puts Peter in a difficult position as he has to take on a superior foe without the Hulk to help him. It is also good for Peter as he idolises Bruce Banner as a scientist. He represents an example of something Peter aspires to so he has a fanboy moment in the presence of someone he admires. This surprises Banner as well as he’s used to people being more interested in the Hulk.

Banner’s inability to Hulk out for a good portion  of the episode forces Peter to take charge of the situation and he proves himself by approaching it scientifically. He refuses to believe in magic so constantly looks for a scientific explanation. It’s clear that the jewel is the source of its power but it isn’t immediately clear why. Harry clears it up by suggesting that his lab partner John Jameson (Josh Keaton) might be the Man Wolf and is coming after Harry because he feels that Harry can help him. It’s entirely motivated by instinct but it shows that the person inside can’t be suppressed completely which links to the Hulk. 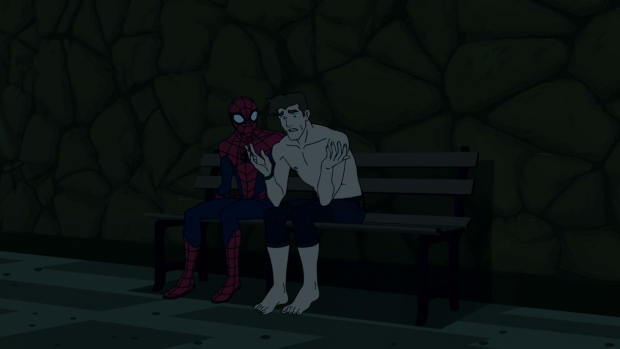 Peter has a fanboy moment

Naturally Gamma Radiation is behind the transformation which makes the Man Wolf something of a mirror to Banner. He mentions that the Man Wolf is a “man trapped in a rage monster’s body” which is something Banner can relate to. On a more basic level the Man Wolf represents unchecked rage turning someone well meaning into something dangerous. It becomes something of a personal battle for Banner as he is forced to confront a representation of what he has become. The episode doesn’t dig too deeply into it but it’s certainly there.

Peter and Banner make for a good team as they have similar approaches. When confronted with several Gamma Werewolves they both assess the situation from a scientific standpoint and try to figure out a solution. This contrasts the Hulk’s gung ho approach but the episode shows that both approaches are valid in certain circumstances.  Working with Banner/Hulk also helps Peter realise that he isn’t as alone as he initially thought he was though he seems to be forgetting about Miles when considering this. 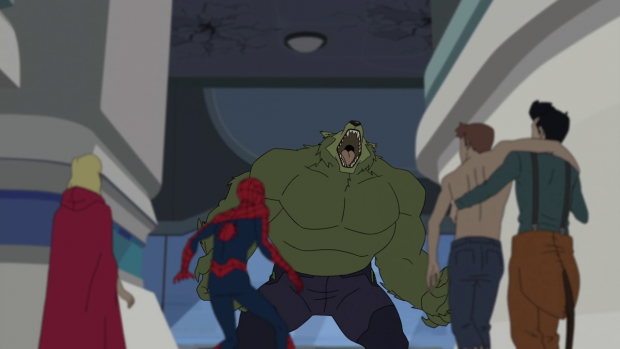 The Were Hulk – everyone’s worst nightmare

The Hulk even has something of a character arc in this episode. It has to do with accepting that Banner is part of him and it follows a really predictable path. At first he resents Banner and doesn’t want to become him. This changes by the end of the episode when he admits that Banner has his uses in some circumstances. It may not be a massive revelation but it’s certainly a start.

Gwen Stacy is connected to the Hulk’s arc as she helps him realise that Banner is useful especially since they are in a Lab. I liked the scenes between Gwen and the Hulk as it establishes Gwen as fearless since she is able to stand up to the Hulk without being afraid of what he might do to her. This episode also reinforces Gwen’s heroic streak when she gets involved in the action complete with a cheesy if slightly incorrect pun.

The action in this episode is really varied and fun to watch. The Man Wolf is more than a match for Spider-Man and the Hulk while also having the ability to create more Werewolves by scratching random bystanders. It can even turn the Hulk into a Were Hulk which is just cool for entirely childish reasons.

Disappointingly this entire situation was the brainchild of Norman Osborn once again. It would have been far better had this been a simple accident where John Jameson got in over his head. It changes this from a cautionary tale to another Norman Osborn scheme where he tries to harness super powers. He’s slowly becoming a pantomime villain which is a shame considering how well the character had been treated before now. 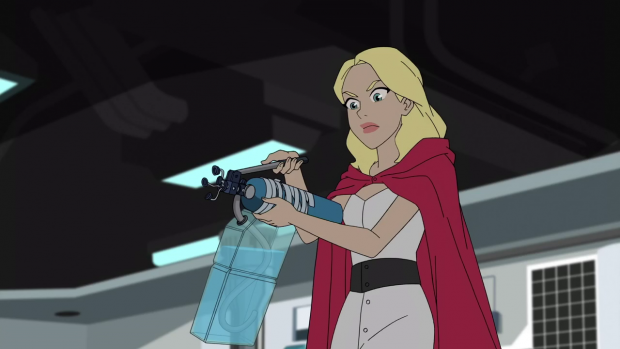 Gwen proves that she’s a bad-ass

An excellent episode with dynamic action, a great team-up and constantly shifting shakes. Peter working with Bruce Banner and the Hulk as separate identities works really well as it helps Peter realise that he isn’t the only hero with multiple identities working to find a balance. The Man Wolf is a really good villain with abilities to challenge both Peter and the Hulk while also putting a mirror in front of Banner and allowing him to relate his experience to the situation. Banner/Hulk even has a defined arc helped by Gwen Stacy who further shows her heroic streak. It also allows for deeper insight into the Peter/Harry friendship by explaining why Harry values it so much.

This episode has the notable issue of revealing that this amounts to yet another Norman Osborn scheme. It changes the narrative from a cautionary tale to another bland plan to harness super powers from Norman which starts to turn him into something of a pantomime villain.