Outlander reunites Claire and Jamie who try to catch each other up on the twenty years they have spent apart.

Thanks to the structure of this season it has felt like a long time apart for the time crossed couple. As I’ve repeatedly said there was more potential to explore the time they spent apart but the show has done a good job of addressing how lost each of them feels without the other. 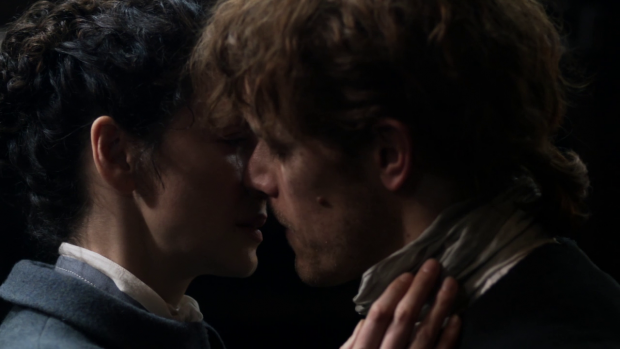 Ultimately this comes down to the acting. Sam Heughan and Caitriona Balfe have amazing chemistry that pops when they’re together but also comes through when they’re apart. There’s something incomplete about the way the actors perform when the other isn’t there to bounce off which really sells the idea that they are “soulmates” to coin a romanticised term.

This episode involves them reuniting after 20 years apart and catching each other up on what has happened in the meantime. Claire is able to show pictures of Bree to Jamie and tell him what her daughter was like as a child. This one scene gives more insight into Claire’s experience of motherhood than any of the previous episodes which highlights a massive failing in establishing Claire’s relationship with Bree. It would be a much more impactful scene if the audience had seen Claire’s reaction to Bree’s first word as well as how she deals with a child who is apparently a force of nature. Still, it’s a sweet scene where both actors sell the shared wistfulness they have for Bree’s upbringing. For Claire she longs to experience raising their daughter again with Jamie at her side and Jamie wishes he was able to witness these milestones on his own.

Amusingly Jamie gets to embody attitudes of his time when he disapproves of seeing his daughter Bree in a bikini. Of course he has no idea what it is so just sees it as her appearing nearly naked in public which is something he doesn’t approve of. Claire puts his mind at ease to some extent by telling him that it’s very normal for the time and that Bree’s is actually somewhat conservative when compared to others. It’s a good moment that reminds us that this show does actually involve time travel.

Jamie tells Claire about his son and doesn’t hold back on the details. The circumstances of his birth are recounted as well as the guilt he feels for being the indirect cause of his mother’s death since she died in childbirth. Sam Heughan tells the story in a noticeably solemn tone. The episode that introduced his son didn’t delve into the guilt Jamie feels about the loss of life associated with the birth so it’s interesting to have that explored here. 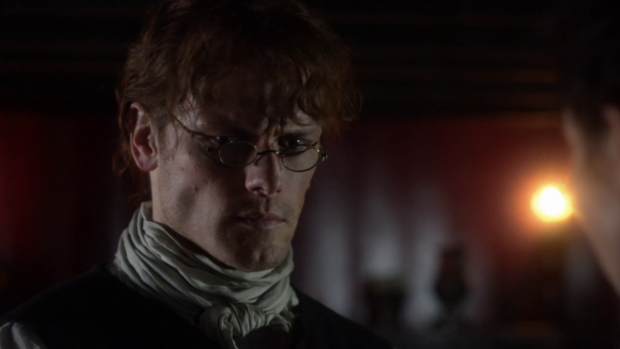 Jamie’s eyesight isn’t what it was

Equally as interesting is Claire’s reaction to this. She simply accepts the fact that Jamie slept with other women when she wasn’t around and shows deep sympathy for Jamie’s situation. He had two children who had full lives that he couldn’t be involved in. He was able to be a part of Willie’s life but his role was a limited some so there’s definite sorrow there and Claire is sympathetic of all that Jamie has gone through when she had a really safe and comfortable life with her only issue being that she couldn’t share it with the man she actually loved. The disparity in their experiences is definitely notable and the episode doesn’t shy away from it.

It could be argued that the lack of conflict makes this reunion less than what it otherwise could be because good drama is mined from conflict. While that’s true it isn’t accurate in all cases. In a lesser episode Claire could have been less accepting of Jamie fathering a bastard child and hiding it from his family but that would run the risk of making her unsympathetic as a character once again as she has no right to expect Jamie to be chaste when he believed that Claire was never coming back.

Jamie could also have questioned Claire’s decision to leave their daughter behind to travel back in time which would have delivered some conflict though I think it would be frustrating more than anything else. I fully believed the reactions of the characters and it’s good to see a show where a relationship doesn’t have to overcome constant unnecessary obstacles in the name of drama.

The bulk of the episode is taken up by Jamie and Claire becoming comfortable with the fact that they are together again. There is an uneasy quality to their interactions in their earlier scenes and the level of comfort grows naturally as they tell their stories. The episode is significantly longer than normal to allow time for these interactions to breathe. Nothing is rushed here as reconnecting after 20 years takes a lot of time which is definitely felt. 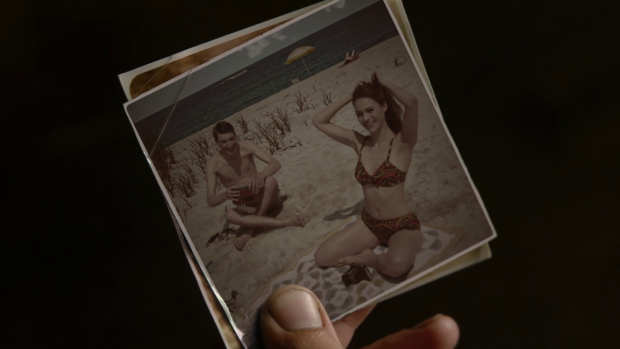 Shocked at the liberated 60s

I liked the approach of delayed gratification as Claire and Jamie both took their time to feel comfortable with each other again. This involves a lot of talking and a slow meal that is covered through narration before they get to the point where they are ready to make love.

The love scene is an extended one and doesn’t feel at all gratuitous. It also goes through stages. The first is an awkward one as they try to get used to their rhythms once again after so long which leads to Jamie accidentally cracking his head off her nose and some adjusting because they aren’t used to each other. After that it is much more carnal as the years of longing are expelled through an intensely passionate and intimate act. Once that is over it transitions to a couple who are entirely comfortable being in each other’s arms and the lovemaking becomes much less animalistic to be replaced with something more tender. The three stages work well as it give a clear visual representation of the stages they go through when reconnecting.

Once the lovemaking is done Claire is able to grill Jamie about what he actually does. Jamie being in prime physical condition actually becomes a plot point as Claire is able to use that to figure out that he’s not a simple printer. It turns out that his printing business is a partial front for alcohol smuggling and his relationship with the owner of a brothel is founded on her being his contact for bringing in the illicit booze.

This lays the groundwork for what will be the conflict in the second half of the season. Jamie is routinely breaking the law and mentions that the authorities have come close to catching up with him on more than one occasion. He doesn’t seem too worried about it but it’s possible that he’s putting a brave face on it for Claire’s sake though I’m fairly confident that Jamie knows to be completely honest with her so I think that his confidence is genuine. 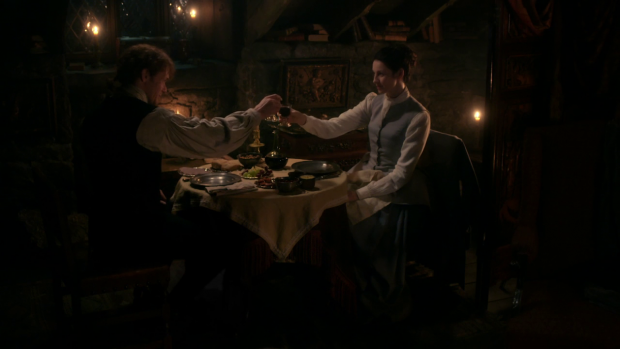 Claire is also introduced to the main players in Jamie’s world. She meets the grown up Fergus (César Domboy) who seems slightly uneasy in his role though it is too early to tell. It’s a nice scene where Claire still acts maternally towards them. Caitriona Balfe plays the happiness she feels at seeing Fergus after so many years really well.

She also meets Jamie’s nephew Ian Fraser Murray (John Bell) and his employee Geordie (Lorn Macdonald). There’s not much to say about them quite yet but Geordie had the biggest showing with his passionate reaction to seeing Jamie kissing Claire without wearing any trousers. He can tolerate different religious views but apparently doesn’t tolerate debauchery in his place of employment. Whether this character will be prominent or not remains to be seen but I personally hope not as he was a little too over the top.

A genuinely amusing scene was Claire’s interaction with the group of whores who assumed she was a new addition to their ranks. The advice they gave about satisfying clients and preventing pregnancy was hilarious and their observation on the difficulty Claire had walking was an amusing indication of the night of passion she had shared with Jamie.

The episode ends on a rather dark note when Claire discovers a man ransacking Jamie’s room looking for his books and immediately makes some really intense threats when Claire arrives. It’s a short scene and fairly terrifying all told suggesting that Claire and Jamie aren’t destined for a fairytale ending quite yet.

It’s worth noting that this episode looked amazing. 18th century Edinburgh was wonderfully visualised to the point it was hard to tell the location was faked. Everything looked accurate as far as I can tell and there was no real sense of artificiality to the reproduced time period. I was very impressed by everything on display. 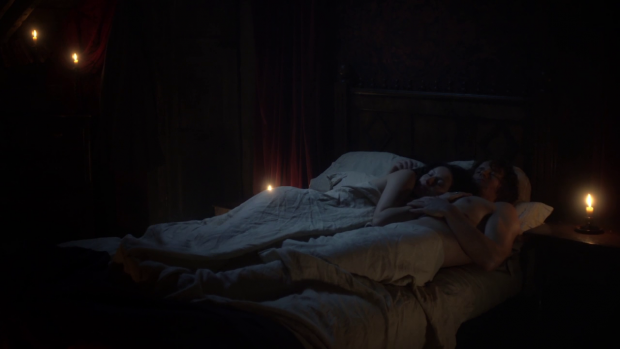 An excellent episode that takes full advantage of the core relationship and spends the necessary time on them reconnecting after so long. This is reflected wonderfully through their conversations and the stages that their lovemaking took. Both actors did an excellent job playing the unease gradually transitioning to effortless comfort. Combine this with beautiful production design and you get a really impressive episode of television.

Less focus is given to the mechanics of Jamie’s life at this point though it is introduced and clearly meant to be developed later. Some of this looks promising though other elements are somewhat irritating. The episode ends on a dark note meant to set up the conflict from now and it seems compelling enough.