“Blood of My Blood”

Last season saw Jamie father a child that he asked John Grey to raise in order to guarantee his son have a good life. At the time it was deeply difficult for Jamie because he wanted nothing more than to raise his own son but knew it was best to give him up. It was inevitable that there would be a follow-up to this because it couldn’t sit unresolved forever. 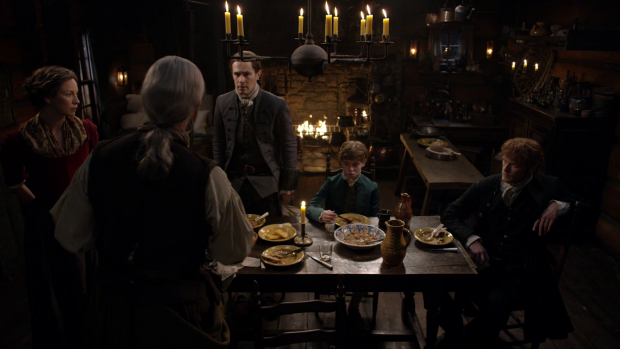 So many politically charged meals

This episode doesn’t bring any sort of resolution to the character story being told but it does progress it which probably means that there is more to come. John bringing William (Oliver Finnegan) to Fraser’s Ridge is clearly very difficult for Jamie who has to look his son in the eye and not admit to being his father. Whether William has the right to know who his real father is is barely touched on but does linger on in the background creating a sense of tension to the whole situation.

Naturally Claire is there as the supportive figure for Jamie because she knows exactly what he’s going through at this point considering she lied to Brianna for her entire life about who her real father was. She also understands how risky it was for John to bring William with him and sees it as something of an insensitive act on John’s part motivated by his own selfish desire to see Jamie. Claire comes at this from the perspective of now knowing John so regards him with suspicion but his prior appearances have shown him to be an honourable man who genuinely cares about Jamie and rarely does things for selfish reasons. Based on that I’m prepared to accept that John brought William with him for Jamie’s benefit but didn’t fully appreciate the extent of the impact this would have.

The interactions between Claire and John are great to watch because there is a great deal of tension between them. Claire’s development throughout the episode from mistrust to respect is really well handled and her initial opinion of him is completely justified considering how she would see the situation. Her admission that she is jealous of the time that John and Jamie shared during her absence makes for great character growth showing a wealth of self awareness on Claire’s part. The gradual shift towards an understanding between them feels real enough though very abrupt as the passage of time in this plot isn’t conveyed as well as it needed to be. It’s consistent to have Claire painted as the unreasonable side of the conversation until she is convinced otherwise. She has always been someone to jump to conclusions about people until she eventually allows herself to consider the facts more objectively. 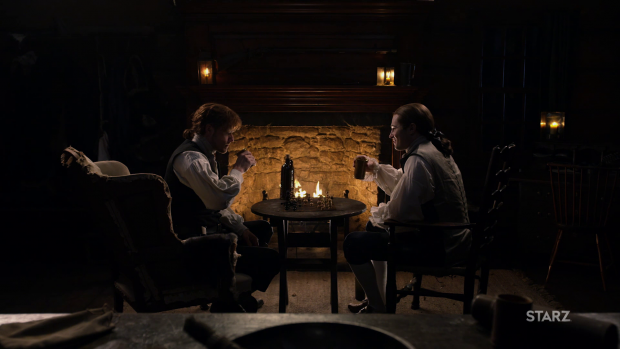 A friendly game of chess

John remains as open about his failings as ever and the reminder of how he struggles with his sexuality in a time that won’t accept it is fascinating. His account of feeling nothing when his wife died is especially powerful and brutal especially with it taking the form of a -as far as he knows- deathbed confession. It comes across as John repenting for his sins in his final moments. Of course he doesn’t die but the sentiment is just as powerful. He also admits that he came to Fraser’s Ridge to test his ability to feel as he’s concerned that it has been lost. This confession also reveals that he finds it difficult to watch Claire and Jamie together and allows Claire to learn that Jamie offered himself to John in exchange for raising William. This helps Claire see John in a different light as he refused despite it being something he wanted. It’s enough to prove to Claire how genuine and honourable John is.

As John fights the Measles, Jamie and William bond out in the wilderness. It was established earlier in the episode that William remembers Jamie from when he was younger and is confused by the introduction being so dispassionate. This shows William to be a smart kid who can’t be fooled by such obvious lies prompting everyone to be more careful around him lest he learn the truth about his true parentage.

William starts off this journey as a fairly stuck up child of a rich family which makes a lot of sense considering his upbringing. The prospect of using an outdoor privy disgusts him and he has a vertiginous view of the world as shown through him referring to the neighbouring Cherokee as “savages” and other such unflattering terms used to describe things. Jamie takes it upon himself to teach him respect and the importance of valuing other cultures as well as the balance that exists in the world around him. The scene where he teaches William how to hunt Deer is a great example of that. He makes William hold his fire because the Deer is out of the necessary range for a kill shot. Shooting to kill is the most humane way to hunt as far as Jamie’s concerned because he sees it as showing the animal the proper respect whereas shooting to wound it cruel because the animal then suffers in agony for an extended period of time. 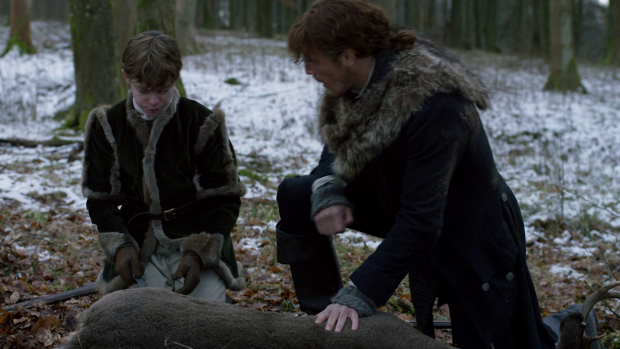 Regardless of your personal views on hunting it should be appreciated that this show takes an ethical position on it through Jamie. It’s clear that he believes in only taking what is needed from the land around him in order to survive. Killing deer and using everything they have to offer before feeling the need to hunt another one is one example of that and only taking what fish are needed from the stream is another. He’s very much in touch with his surroundings and wants to live in harmony with nature rather than upsetting the balance by taking more than he needs. It helps to justify why he gets along with the Cherokee so well because they will have similar values and further cements Jamie as a noble figure in an increasingly savage world.

William takes to Jamie’s lessons well which creates an intangible connection between them suggesting that the apple doesn’t fall far from the tree. Oliver Finnegan has enough of a passing resemblance to Sam Heughan to make this connection believable and the natural chemistry that exists between them does the rest. William is shown to be accepting of the lessons Jamie teaches him which culminates in him throwing himself upon the mercy of the Cherokee after he disrespects their borders. He refuses to let Jamie take the fall for him and accepts the responsibility that comes from the lack of respect he has demonstrated. Fortunately the consequences aren’t lethal so it’s a lesson well learned. There’s a real sense that William has grown up a great deal during his time with Jamie and it’s clear that Jamie takes some comfort in being able to spend time with his son.

Jamie not looking back as he left William last season is brought up. William remembers running after him and not receiving any sort of reaction but doesn’t understand the reasons for this. As he leaves Fraser’s Ridge he makes sure to turn and look at Jamie mirroring that moment perfectly while showing the different emotional mindsets. Jamie refused to look because it would be too difficult for him to see his son so upset. He knew that he had to leave and try to forget so turning to look would make that difficult for him. As a contrast William wants to remember Jamie and all he has learned from him so turning to look at him is a powerful indication of that. It’s also a promise that the relationship isn’t over. 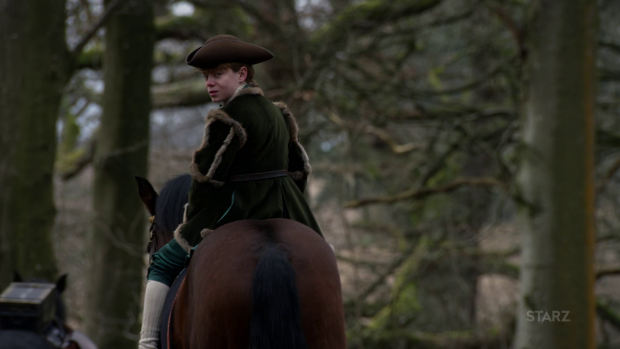 William makes a point of looking back

It would be easy to accuse this episode of having little to do with the ongoing narrative and that’s true to an extent though it’s fairly clear to me that Outlander is much better at more intimate character driven stories than bigger picture narratives. I find it more interesting to watch Jamie spend a long time bonding with the son he thought he’d never see again than any attempt to tackle larger issues such as slavery because of how such subjects have been handled in the past. The idea of unfairly increasing taxes introduced last week is part of John’s reason for being at Fraser Ridge and he takes the side of the establishment, campaigning for the necessity of those taxes. Murtagh takes exception to this because he firmly believes them to be unfair so there is some tension in that dinner scene serving as a reminder that the plot is still ongoing and there will continue to be tension in the coming episodes.

The end of the episode is devoted to some romance between Claire and Jamie. The loss of Claire’s wedding ring in the first episode of the season was very upsetting for her so Jamie has looked to rectify this by having a more ornate one made with a Celtic inscription that translates to “Give me a thousand kisses”. This scene does has very little deeper significance to any ongoing plots but acts as a really powerful romantic moment serving as a reminder of how strong the connection between Claire and Jamie is. It’s important to spend time maintaining their marriage to keep it believable and scenes like this are an excellent way of doing that. 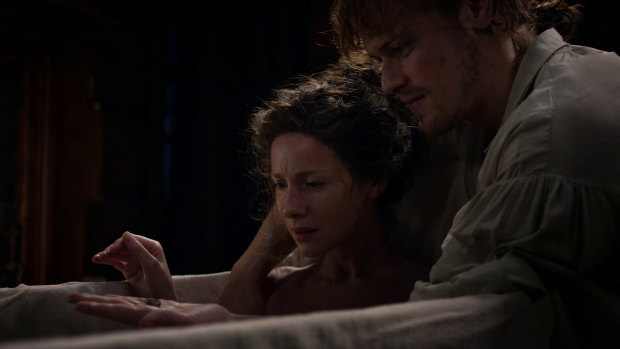 A strong and powerful character driven episode that gives Jamie an opportunity to bond with the son he thought he’d never see again. The scenes between Jamie and William are really well handled; Jamie clearly struggles to keep the truth hidden but remains strong and does what he can to teach his son the value of respect. William takes to these lessons well and a strong bond grows between them. The fact that William remembers Jamie from his youth makes this stronger and the mention of the moment where Jamie refused to look back because it was too painful before mirroring it with William looking back as he leaves Fraser’s Ridge was really powerful.

John spends most of his time with Claire once he becomes sick which allows her feelings about him to be explored. She jumps to conclusions based on assumptions she has made combined with what she has heard and has those preconceptions shattered through listening to him and realising that he is actually an honourable man who acknowledges his faults and has no hidden agendas. Claire is consistent in her characterisation as being unreasonable and the journey towards understanding is well handled though the passage of time isn’t conveyed as well as it needs to be. Ongoing plots are largely put on hold here though there is some mention of the tension surrounding the inflating taxes as a reminder that it is still a factor. The end scene where Jamie gives Claire a new ring is excellent; it serves as maintenance of the marital relationship to keep it feeling real and makes for another beautifully acted Claire/Jamie moment.