Outlander takes Claire and Jamie back to Lallybroch to reflect on everything that has changed during the 20 years they spent apart.

Last week saw the destruction of Jamie’s printing business which left him no choice but to return home with Claire in tow. There was also the reveal that Jamie has another wife that he had kept from Claire. Naturally this isn’t a secret that could be kept forever and this episode focuses on the truth coming out. 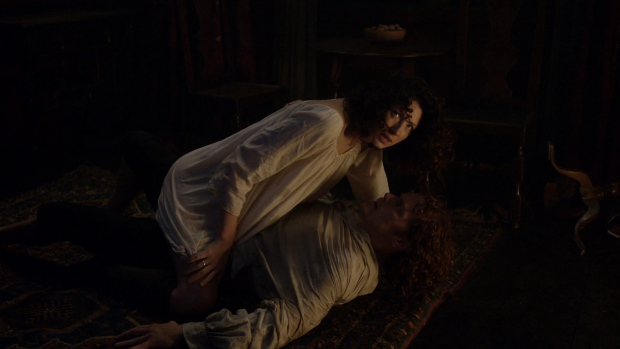 Jenny cools the situation down

This show is in a bit of a slump right now; one that it seems unable to claw its way out of. The 20 year gap in Claire and Jamie’s marriage is a big deal and is definitely treated as such but for the wrong reasons. It’s bizarre that they are both accepting and simultaneously intolerant of all that has happened in their lives since they last saw one another. Jamie constantly brings up Claire staying with Frank despite the fact that she didn’t love him and Claire judges Jamie on the decisions he has made since she last saw him.

The key piece of information on either side is that for all intents and purposes, they were dead to one another. Jamie let Claire go back to her own time secure in the knowledge that he would never see her again and Claire had assumed that Jamie died at Culloden. Reuniting after all this time with everything they thought they knew is definitely an adjustment but neither of them seem prepared to accept that a lot has changed in those 20 years.

Claire finds out that Jamie actually took another wife when they were apart. For some reason he elected not to tell her that when she returned and there’s no doubt that this was bad of him. It is interesting how the technicality of what Jamie actually said comes into play. Claire asked him if he ever loved again and he truly didn’t because his marriage is a loveless one that he entered into to support the kids who needed a father more than anything else. 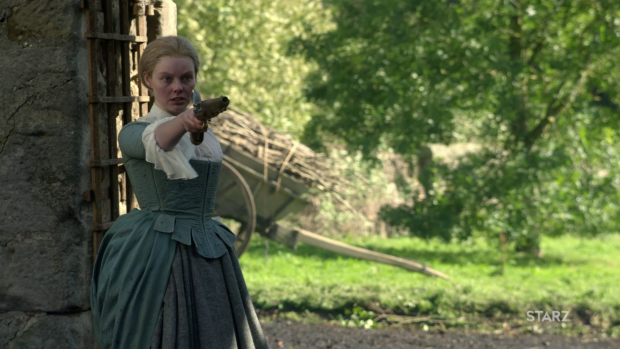 The sense of betrayal on Claire’s side comes from the fact that the woman Jamie married is Laoghaire; someone who tried to have Claire killed and generally plagued the early days of their marriage. Having reservations about that is valid even bearing in mind the 20 year gap. Claire has no reason to believe that Laoghaire has changed in any way so feels insulted that Jamie would choose her more than anyone else. This is a conclusion that she reaches without understanding the full story which is also valid considering her reaction is purely emotional.

Where it falls apart is the hard time she gives Jamie. It feels like they have the same argument over and over again with no real movement towards any form of reconciliation. Claire at least owes Jamie the opportunity to give her an explanation because all Jamie has really done is continue to live his life after his wife left forever. Their repetitive discussions essentially amount to a competition on who can gain the moral high ground when the reality is that neither of them deserve it.

Claire makes some radical assumptions pretty early on such as assuming that the children are his which seems baseless to me because one of the first things Jamie admitted to her upon her return was that he had a son. If he also had two daughters then it’s fair to assume he would have mentioned them. The scene where they argue about this is really well done despite the failures in the characterisation. Caitriona Balfe and Sam Heughan’s chemistry also works in their arguments that exude as much passion as their lovemaking albeit of a different sort. It’s a nice touch that they are barely able to distinguish the two as shown by them almost having angry sex in the midst of the argument. The actors almost sell their arguments as they play off one another but the lunacy of what they are arguing about overpowers it. 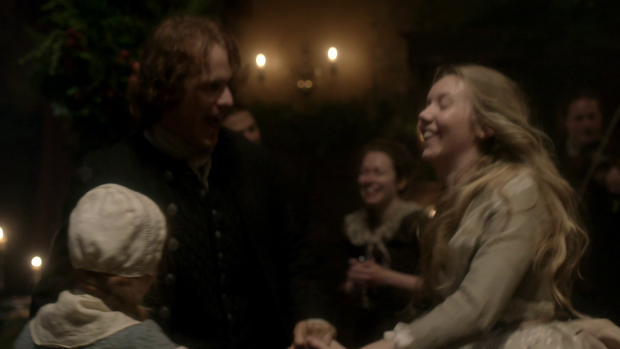 Jamie learns how to enjoy himself again

Their many conversations fill in some details about Jamie’s life before the print shop that we weren’t previously privy to. The audience perspective has entirely flipped to that of Claire who makes Jamie answer for himself. I found the treasure island flashback to be somewhat out of left field and only serving as setup for the ending but the flashback involving Hogmanay -New Year’s Eve- celebrations at Lallybroch is incredibly rich and informative. Jamie tells the tale of him being a broken man lacking direction of any sort. He had just left his son and didn’t know how to continue on. LOAGHAIRE’s daughters were able to give him that sense of purpose as he could see how lost they were without a father to support them.

Being a woman in the 18th century Laoghaire required support herself as the time period wouldn’t really allow women to be self sufficient. In other words Jamie’s motivation to enter into marriage was decency and a desire to do right by two young women who deserved better than life has dealt them. It seems enough to convince Claire that Jamie is a good man and not once did he fall in love with another woman though it’s clear she needs more convincing judging by her declaration that they may not belong together any more. Claire’s behaviour is incredibly frustrating and I would rather they either settled the argument or found something else to talk about. Jamie shouldn’t really have to spend all this time proving himself to her especially considering she was hardly chaste in her time apart from him.

Laoghaire hasn’t really changed very much. She’s still the jealous borderline lunatic prone to violent overreaction. This episode sees her shoot Jamie -albeit accidentally after threatening him- before trying to extort him to continue supporting her children. It’s a shame that the character hasn’t developed any despite the fact that her less than ideal life was established in dialogue. There was an opportunity to portray her as a tragic figure who realises that getting what she wants isn’t all it’s cracked up to be. I dare say more could have been done but that’s certainly one angle that could have been explored. 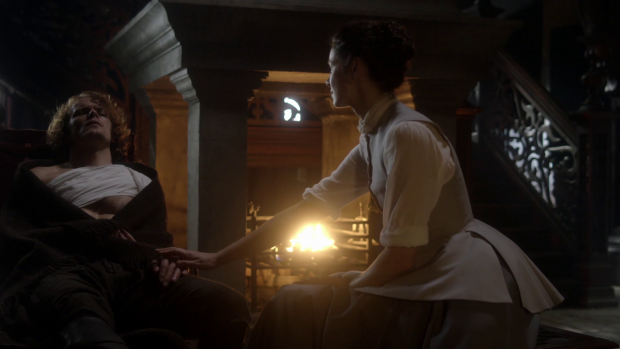 Jenny being featured in an episode is always welcome as far as I’m concerned and she is put to good use here. My favourite moment was when she tipped a bucket of water over Jamie and Claire to prevent them from having angry sex. It seems that her brazen attitude and lack of sensitivity when it comes to putting her point across will never change.

She also has a number of really thoughtful scenes where she provides her perspective on the situation. The discussion she and Jamie have about parenting is interesting as she doesn’t recognise his experience in that area. She’s already annoyed with him for taking Ian away and putting him in danger and initially doesn’t accept Jamie’s advice about letting Ian make his own choices while he still thinks his parents can actually stop him. She eventually comes around to that way of thinking though considering Ian’s abduction I wonder what her stance on that will be once she finds out.

Jenny also makes it clear that she deeply resents Claire for leaving them for 20 years. She doesn’t have all of the information but is smart enough to know that something doesn’t add up. As far as she’s concerned Claire disappeared and them came back 20 years later expecting to resume her life with them as if nothing happened. Jenny is someone who needs people to earn her trust and that’s something Claire has failed to do. Before Claire left she was content with the fact she was the woman Jamie chose to be his wife but now she finds the whole thing suspicious.

It eventually becomes clear that Jenny also feels betrayed by Claire for abandoning them. She admits that Claire was a sister to her which is the one real moment of vulnerability in the episode from her. Laura Donnelly plays the reluctance in the admission wonderfully and Caitriona Balfe compliments this with the awkwardness as Claire struggles to find a way to be honest. Claire is very careful with the truth but is able to talk about being married once again and never forgetting about her Lallybroch family. It’s a raw and honest moment indicating a step forward in their relationship though all will likely be undone by Ian’s abduction. 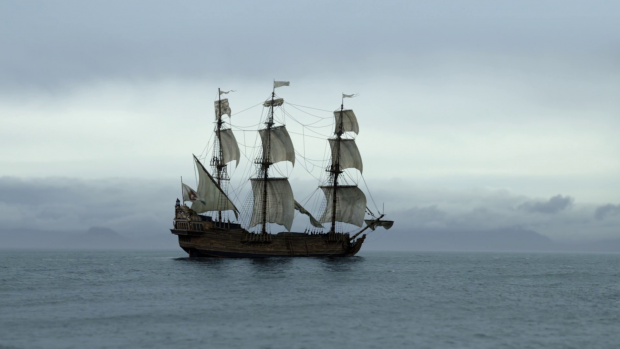 Another disappointing outing that is dragged down by the repetitive arguments Claire and Jamie are having. Claire in particular doesn’t come across in the best light because of her judging Jamie for his life choices despite the fact that she should be sympathetic to the fact that he thought she was lost to him. Not to mention the fact that she made a life with another man when she thought he was dead. The reveal that Laoghaire is his wife is something Claire struggles with given their history and it’s easy to see why though it takes her a while to let Jamie explain himself. His motivation for marrying her was noble enough and makes some sense once he tells the story.

Sadly the episode drops the ball on Laoghaire by not allowing her to develop and reverting her to her old villainous ways despite the fact that there was an opportunity to explore what it can mean to get exactly what you want. Jenny is the highlight of the episode from her attempts to keep Jamie and Claire in line to her moment of vulnerability when she admits she saw Claire as a sister. She will likely have more opportunity to shine on the back of her son’s abduction.