Outlander focuses on Claire as she prepares to make another trip back in time to have her long overdue reunion with Jamie.

I’ve criticised this season so far for burning through plot so quickly that it’s impossible for any detailed exploration of the character relationships. Jamie’s story has generally been well told but Claire’s has felt horribly rushed. Thankfully this episode bucks that trend by delivering a measured and intimate personal narrative focusing on Claire’s relationship with Bree. 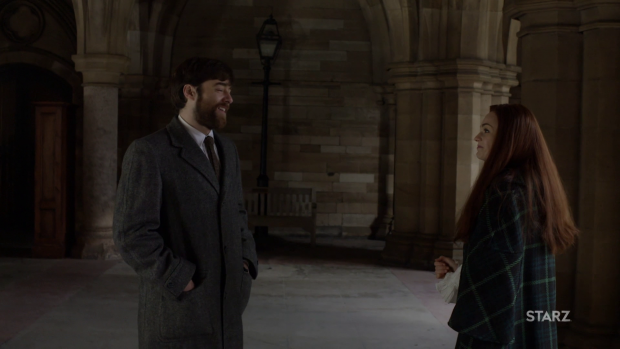 The revelation that her real father is an 18th century highlander would be a lot to take in for anyone so I’m glad that the episode spent time on the impact this has on Bree as a person. We see that her mind is elsewhere when in class and this is causing her glades to slip to the point that failure is a very real possibility in her academic career. She’s trying to go back to her life as it was and finding it very difficult to do so. Ignoring all of the time travel plot details this is actually a very relatable problem that she’s having. The relatable part comes from the fact that she has recently learned that the man who raised her isn’t her real father and that causes an emotional upheaval. Of course the details of her real father are more unconventional than the average parental revelation but the basic takeaway from the situation is that Bree is dealing with the fact that she has been lied to her entire life and wondering what her real father is like.

This causes friction between her and Claire because Bree decides that she is going to drop out of Harvard and move out at the same time. What she is going to do instead is never made clear but Claire isn’t happy about this and begs her to reconsider. In a way the knowledge of her true origins has given her greater clarity than she ever had before which fuels her decision. She argues with Claire with passion reminiscent of Jamie as well so there is a sense that Bree is beginning to find herself thanks to having the clarity that comes with the truth. The episode does miss out on the moment of acceptance for Claire when she comes to respect Bree’s life choice but other than that her interactions with Bree were believable.

The appearance of Roger creates an opportunity for Bree to make sense of the way she is feeling because she is able to talk to someone her own age who understands what she’s going through. Roger was also raised by a man who isn’t his biological father so understands the conflicted feelings Bree is having on the subject of her roots and her true parentage. I feel that the episode could have done more with this as Roger feels like more of a sounding board for the other characters rather than being a character in his own right. There are exceptions to this such as his love of daytime television but he could be fleshed out more than he is.

I like that time is taken to focus on Bree and the way she feels about the big changes she has experienced in her life. She is a good character who hasn’t had a lot of screen time so far this season and this episode proves that she definitely deserves more focus. The relationship between her and Claire is largely implied since we have never seen it developed but the performances of Caitriona Balfe and Sophie Skelton make up for this by making it believable that they are mother and daughter. There is a familiarity between them that is believably a familial connection and it creates a history between them that the show hasn’t previously established. 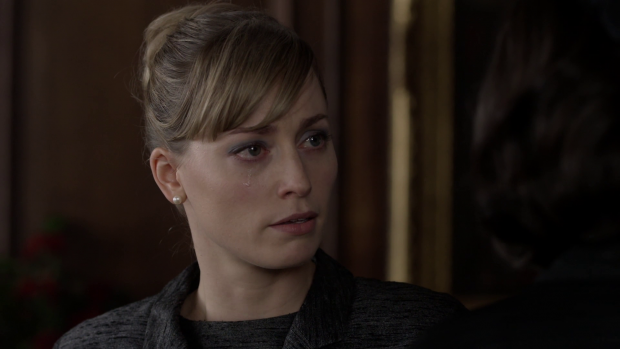 Claire is faced with the consequences of her treatment of Frank

I also like that the episode takes time to deliver a fitting tribute to Frank in the form of a wake for him arranged by his colleagues. This allows Frank’s girlfriend Sandy (Sarah MacRae) to confront Claire about the situation that she ha to live with. I’ve mentioned in the past that Claire’s treatment of Frank doesn’t paint her in the best light so I really appreciate that the show doesn’t forgive her for this now that Frank is dead. Sandy tells Claire that Frank was the love of her life and she was willing to share Frank with her if that’s what needed to be done. She resents Claire for not letting Frank out of the marriage and generally provides another perspective on the situation. It would have been easy to forget about this part of the plot and let Sandy fade into the background but confronting Claire with the consequences of her treatment of Frank was a nice touch and adds complexity to the narrative by reminding the audience that Claire hasn’t always made the right choices in life.

Claire is struggling with the prospect of travelling back in time to see Jamie again. Her feelings on the subject are complicated as she has spent 20 years trying to move on with her life and forget Jamie which obviously hasn’t been easy. Roger throws a spanner in the works by coming to America with information on where he wound up. The previous episode was all about Claire getting to the point of accepting that finding Jamie wasn’t going to be possible and moving on so Roger’s revelation is almost unwelcome as it opens up a wound that Claire thought she had closed. Seeing her perform surgery early in the episode is symbolic of Claire cutting out what Jamie left within her and closing herself off to it. It proves to be entirely temporary but I thought it was an effective piece of symbolism nonetheless.

Claire’s arc in the episode involves her preparing to reunite with Jamie which involves physically preparing by making an outfit that will be useful in Jamie’s time as well as loading up with supplies of penicillin and money to use when she gets there. The montage of her making her outfit to Bear McCreary’s version of the 1960s Batman theme was especially excellent especially given the references to contemporary television for the time that Claire’s story is set. It was a welcome light moment in an otherwise serious episode.

The other part of Claire’s arc involved becoming emotionally ready to make the trip. Her reluctance was twofold; most obviously was having to leave her daughter behind and face the prospect of never seeing her again which provides some really honest and visceral emotional moments between Sophie Skelton and Caitriona Balfe. Bree is entirely supportive of her mother’s decision and believes that she will be able to make her way back even if Claire insists there are no guarantees. The issue is that Claire has to accept the idea that she may have to leave her daughter behind which she eventually does. 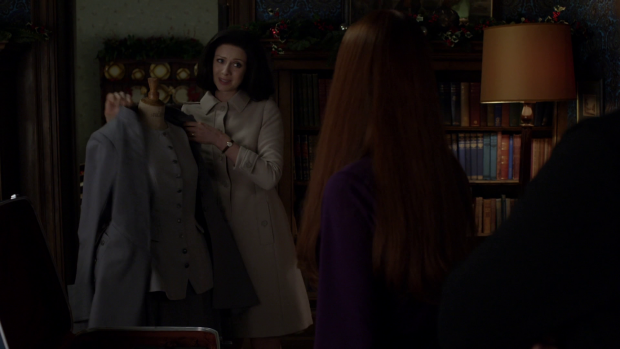 The “Bat Suit” is complete

Another side of Claire’s arc is deciding if the trip would be worthwhile. Claire may have thought about Jamie non stop for 20 years but it occurs to her she can’t expect the same of him. We as the audience know that he has kept Claire in his thoughts and in his heart but Claire begins to doubt this as her journey to the past grows closer. To resolve this she talks to Joe. Their friendship is something the show has failed to develop but it is again saved by the performances of Caitriona Balfe and Wil Johnson who manage to convey a deep and natural friendship in the way they interact. Claire has found someone she can talk openly with and ask advice from. She leaves out the details of the time travel but confesses that Jamie is Bree’s real father and tells him that she’s ready to look him up once again. The concern she has is that he might have forgotten her and she also wants to know if she’s sexually attractive. Joe reassures her on both counts which leads to them sharing a warm and sincere goodbye. It’s a well executed emotionally resonant moment that highlights the friendship that the characters share.

The most powerful scene the episode had to offer was the goodbye between Claire and Brie. Claire makes sure that Brie will be taken care of when Claire is gone by leaving her the house and the bank accounts so she has peace of mind in that respect. The harder part is saying goodbye and this definitely comes across in the performances. It is most telling when Bree has a quiet moment of grief for the loss of her mother before putting on a Santa hat and putting on a brave face for Roger who is there to support her. It’s well executed and the emotion radiates off the characters.

I hope this isn’t the last we see of Bree as there is a lot of potential for her character to grow and develop. Perhaps a side story involving her getting used to living her life without her mother or something that leads to her own journey to the past where she meets Jamie. I haven’t read the books so I might be speculating on plot points that are already coming because they were chronicled in the pages of the books.

Claire’s return to the past happens off screen but she finds Jamie very quickly who faints when he sees her. After an episode full of heavy duty emotion it was a good choice to end on a comedic beat and Jamie’s reaction feels very in character for him considering the shock that would be attached to this moment. 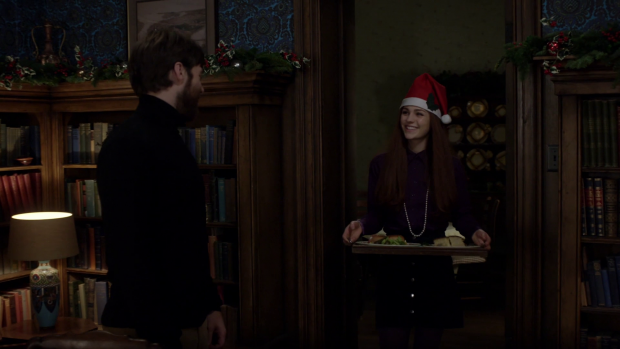 An excellent episode that takes a step back and spends time exploring the mother/daughter dynamic between Claire and Bree. Claire’s arc involving her getting to the point where she is physically and emotionally ready to make the trip back in time works really well and the scenes shared between her and Bree are very well handled with special attention to be given to the emotional goodbye that they share. Focusing on how Bree reacts to the knowledge of her true parentage is a great choice as well and the scenes where she deals with that work well. More attention could be given to Roger as a character rather than largely being a sounding board for the other characters but his function within the plot is clear.

The episode also brings focus to some background elements such as Frank’s girlfriend Sandy reaction to the way Claire treated him reminding the audience that she doesn’t always make the right decisions and that her choices do impact other people. It would have been easy to leave this in the background but the attention it was given was appreciated. The final scene where Claire surprises Jamie and he faints was a nice comedic cliffhanger that feels true to Jamie’s character.