Outlander continues to concentrate on the exploits of Jamie following Claire’s return to her present by detailing his role as a Groomsman for a noble British family.

This season has so far been fairly uneven in how it treats the characters but Jamie’s story has been consistently strong and well handled. The episodes have a tendency to rush through Claire’s part of the story but Jamie’s is handled very deliberately with excellent attention to detail. 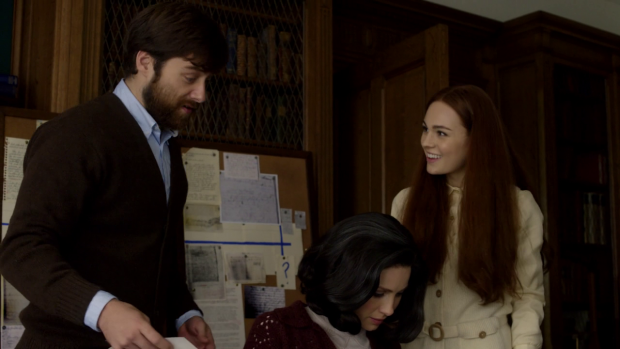 Following his release from prison last week; Jamie finds himself in the service of the Dunsany family. They are a noble and wealthy British family with lots of influence and connections. His job is to look after the horses and tend to the whims of the spoiled Geneva (Hannah James).

Geneva is somewhat lacking in screen time but her character is well defined by the way others react to her. The servants draw straws to decide who has the dubious pleasure of accompanying her on her rides and her sister Isobel (Tanya Reynolds) is clearly well aware of Geneva’s “holier than thou” attitude. This was a really clever way to introduce the character to the audience as it keeps the perspective focused on Jamie and the other servants who see her in a particular way. The perception is that she isn’t a very nice person and that she has an unreasonable dislike for those in her service.

Naturally she takes a shine to Jamie who barely conceals his contempt for her. It is abundantly clear that she isn’t used to having her authority challenged so Jamie offers her something she hasn’t experienced before when he voices his own opinions and protests her instructions. It doesn’t take long for Geneva to start enjoying this dynamic shown by her gleeful laughter when Jamie purposely drops her in the mud.

It’s not difficult to figure out where this is going and it does progress pretty much as expected. Predictable plotting isn’t necessarily a bad thing as it all depends on how the story told. This episode is a particularly good example of how a predictable plot can still be engaging because it has such a rich background. The trick here was turning Geneva from an unlikeable spoiled rich girl to a more sympathetic character. This was achieved by focusing on the limitations of her gender at the time. She is promised to Lord Ellesmere (James Cameron Stewart) by her father as a business transaction. Geneva has absolutely no say in this and it’s clearly not an ideal match for her as Lord Ellesmere is many years older than her. She is effectively trapped in a life she doesn’t want and this is definitely something she resents. 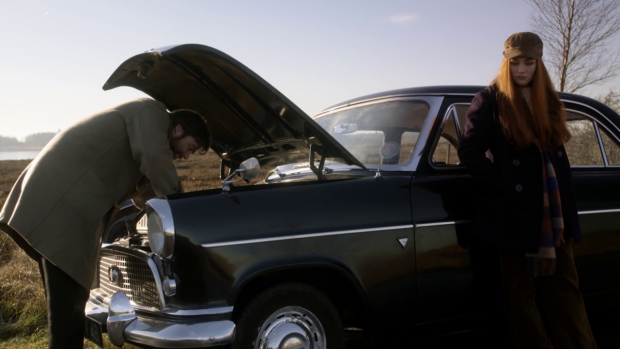 In order to reclaim a small amount of free will for herself she propositions Jamie to take her virginity before her wedding night so that Lord Ellesmere doesn’t get that satisfaction. She does so by threatening to expose his real name which Jamie doesn’t take well. He is insulted that someone would use knowledge about him as a form of blackmail and refuses her request but quickly realises that he has no real leverage and isn’t in a position to refuse.

This results in Jamie taking her virginity in a moment of respect and tenderness. The respect comes entirely from Geneva’s side as Jamie is unable to respect someone who would blackmail him in such a way. He refuses to let her call him Jamie as she hasn’t earned the right to use the name that the family she threatened gave him. This shows that Jamie is completely in control of the situation and sets the terms of this encounter despite the fact that he is technically Geneva’s servant.

Geneva is profoundly affected by their encounter. She declares her love for him which Jamie dismisses as being a result of the feelings he has stirred in her rather than being genuine affection. Their sexual encounter shows how naive Geneva is as she confuses physical pleasure for actual feelings and her world view is very confined. She knows very little outside her family and feels trapped by the fact she is being gifted to another man in order to improve her family’s social standing. Her scenes with Jamie suggest she has the capacity to learn and show compassion to others. Geneva has potential that she will never have the chance to explore and that makes her somewhat sympathetic. The unfulfilled potential culminates in her off screen death completing her tragic arc.

There is a further complication as a result of her night of passion with Jamie. She becomes pregnant with his child which greatly upsets Lord Ellesmere who knows that it can’t be his child. He feels betrayed by this as he was promised a virgin but got the opposite. His reaction is very dramatic and results in a stand-off between him and Geneva’s father, William (Rupert Vansittart). Lord Ellesmere holds a knife to the child’s throat as William has a pistol pointed at him. Of course Jamie attempts to defuse the situation but fails and has to shoot Lord Ellesmere to save the life of his child. It’s a great scene; really tense and allows Sam Heughan to channel Jamie’s soldier tendencies that we don’t get to see very often. 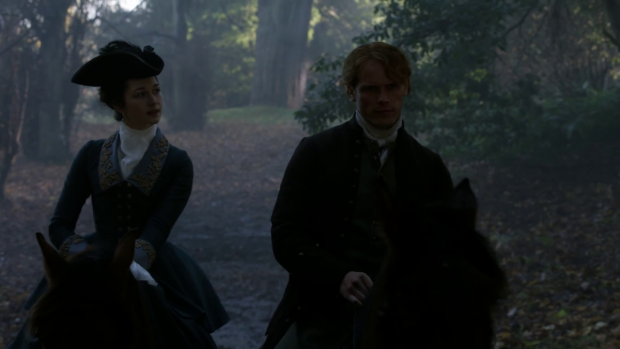 It’s also an emotionally charged moment as Jamie is faced with the prospect of losing yet another child. As far as he knows he has lost two children and carries that pain with him every day of his life. Potentially losing a third is unbearable for him so he is highly motivated to ensure that he saves the baby here. Once he does he is offered his freedom by Lady Louisa (Beth Goddard) but opts to stay so that he can be close to his son.

This is where the telling of Jamie’s story starts to fall apart a little. There are plenty of scenes where he interacts and bonds with his son and they make for good viewing. The underlying fact that Willie (Clark Butler) has no idea Jamie is his father adds an air of tragedy to their interactions. Jamie does everything he can to teach Willie good values and offer emotional support as he grows up but he can’t be honest about the fact that he fathered him. Everybody else knows because Willie resembles Jamie so obviously but it’s never spoken of so that Willie can spend his life in ignorance and never question such things. I suspect that it’s something that will come up in later episodes, especially if and when Bree gets to meet her father.

The problem with these scenes is that the episode doesn’t really have a chance to explore how Jamie feels about this. We see plenty from Sam Heughan’s performance and a lot of it is implied but it would have been interesting if he could have confided in someone about the situation. Beefing up one of the servants as a good friend for him or using John as a sounding board would have worked. Sometimes this show doesn’t dig deep enough into the emotional potential afforded by the scenarios. Perhaps an entire episode exploring Jamie and Willie’s relationship would have fixed this.

Jamie eventually decides that it’s time to return to Scotland and asks John to take care of his son. He even offers to sleep with him in exchange. John declines the offer because he’s an honourable man despite the temptation. John would rather that happen between them under more genuine circumstances rather than it being payment for a favour. He values the friendship too much to take advantage of Jamie in this way and promises to look after Willie. John has also opted to marry Isobel which isn’t his preferred choice since he clearly prefers men. This is similar to Geneva being trapped by the role of her gender as he is unable to pursue the feelings that he really has. Instead he is marrying a woman for appearances but he also respects her and thinks there is more to marriage than the sexual component. He doesn’t seem defeated by his choice and carries himself with optimism knowing that Jamie will be be secure in the knowledge that his child will be cared for. 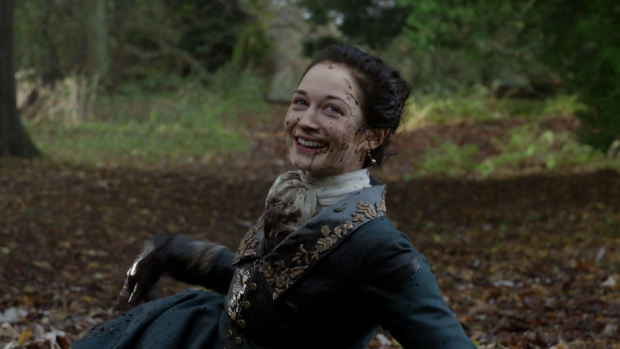 The scene where Jamie leaves and Willie chases after him wanting him to stay is wonderfully handled. It encapsulates the bond perfectly and James riding off into the distance appearing to be strong and confident with his back to his son while being torn apart as we see him from the front is an excellent piece of acting and very emotionally charged. Jamie knows he is doing the best thing for his son but also can’t bear the thought of leaving him. It’s complex and interesting.

Claire’s story continues from where it left off in last season’s finale. Much of it is busy work as she tries to find proof that Jamie survived. The theory is that time passes equally in both time periods relative to Claire so 20 years in her present is also 20 years in the past meaning if she returns then it will be 20 years after she left. This means that she needs to be sure she’ll be able to find Jamie before making the trip. There isn’t much to her scenes other than her looking through records and trying to figure out what happened to him. She is missing the key piece of information that he was living under the assumed name of Alexander MacKenzie at the time so her search is futile since is missing that component. The key part of this is when she appears to let go of him by coming to the realisation that she is unable to find him so she returns home with Bree with the presumed intention of moving on with her life. Obviously this won’t stick but the moment she decides this is handled well.

These scenes also perform the function of developing the obvious connection between Bree and Roger. It’s clear that the time they have spent together has drawn them to one another and they don’t like the idea of being separated from one another. They share an affectionate kiss suggesting that there is more to be explored there but as with this part of the story in prior episodes there just isn’t a lot to work with here. Much of it is rushed with limited exploration of the more interesting aspects. 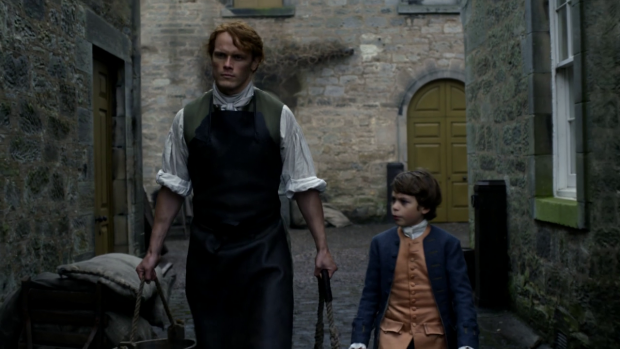 Jamie bonds with his son

An improvement on the previous episode with far more focus on Jamie and his part of the story. His exploits in service to the noble family are fascinating and the exploration of gender politics at the time through Geneva’s unwilling marriage to Lord Ellesmere turns her from an unlikeable character to a sympathetic one. The exploration of Jamie’s relationship with his son could have been deeper but there are a lot of strong moments here.

Claire’s aspect of the story is far less interesting other than when she decides that finding Jamie is impossible and returns home after letting him go. The tragedy comes from the fact that she’s missing a key piece of information in finding him and the acting conveys the sense of loss nicely. The development of Bree and Roger’s relationship works well though not enough time is devoted to adding the depth required.