Outlander follows on from Claire jumping overboard at the end of the previous episode and explores the difficulties that come with that.

Claire leaving the relative safety of the Porpoise in an attempt to reunite with the Artemis so that she can warn Jamie about his upcoming arrest could definitely be seen as a stupid idea. It has the slimmest chance of working and there’s a really high risk of her ending up dead as a result. Of course this is Outlander; a show that currently seems to thrive on coincidence driven plotting but I’ll get back to that. 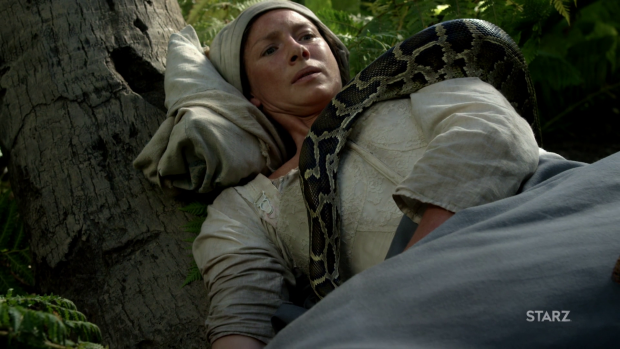 The episode starts off as something of a riff on Robinson Crusoe, Cast Away or even to an extent The Martian; all stories of someone battling against the natural world for survival when cut off from civilisation. I’ll admit that The Martian is a bit of a stretch as a comparison but on a thematic level it holds up.

At first I thought the episode would be entirely focused on Claire trying to survive as she tries to figure out her next move though this actually makes up a very small part of the episode. It takes up too much time to considered disposable and doesn’t go on long enough to have any measurable impact so it occupies an awkward middle ground of seeming important but not really amounting to anything.

It’s a pity as this is definitely an episode of Outlander that I would have enjoyed watching. Claire is a very resourceful person so seeing that put to the test would have been an interesting break from the norm. The show has established narration as a storytelling device so that could have been used to fill the long stretches of time with no dialogue; something that makes The Martian comparison even more valid. 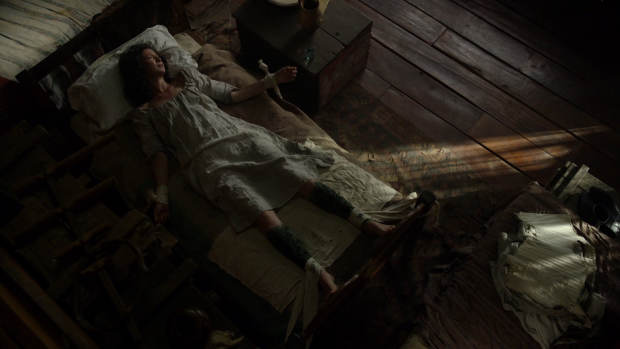 Unfortunately her isolation is wrapped up very quickly with only a handful of scenes depicting the difficulties she has surviving. Amusingly the two mornings she wakes up after sleeping rough have her dealing with hostile wildlife. The first is an army of ants who give her a collection of really nasty looking bites that are really itchy. Her second awakening comes with a very large snake slithering its way over her. Thankfully it’s just passing by but the fear was definitely real judging by Caitriona Balfe’s performance. It’s a really tense scene punctuated by Claire’s terror while attempting to remain still and silent in the hope that the snake won’t notice her and decide to attack.

The snake is pretty much the final solitary situation she has to deal with before happening upon other human beings. Just as she collapses she is taken in by Mamacita (Vivi Lepori) and Father Fogden (Nick Fletcher) who nurse her back to health and help her clean herself up.

Similar to the survival section there isn’t an awful lot to say about these scenes. Mamacita wants Claire to go on her way out of an irrational fear that Claire will dig her claws into Father Fogden in an attempt to replace his late wife. Father Fogden is interested in keeping Claire around because he superstitiously believes that her arrival brings good fortune thanks to a goat successfully giving birth for the fist time in a long time. He also talks to a coconut that he calls Coco indicating that he has been without general human contact for a lot longer than he probably should have. 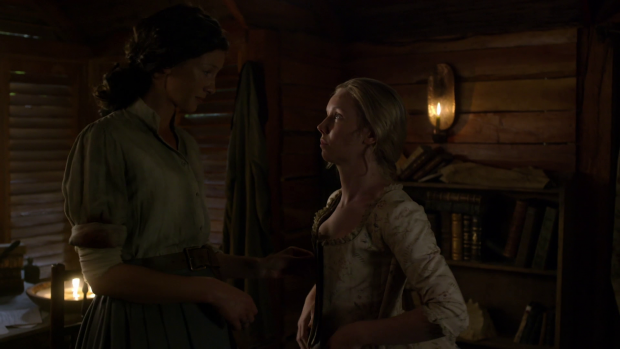 For the most part this feels like killing time until the next phase of the narrative can begin though the scenes are fairly light and enjoyable in their own right. Outlander doesn’t flirt with comedy all that often and this is probably as close as it gets to doing so. Claire talking to Coco as Father Fogden watches to convince him that her leaving is a good idea was really amusing and allowed Caitriona Balfe to stretch her rarely used comedy muscles. You do have to ignore that she is taking advantage of an obvious mental illness though it’s easy to see why since her freedom is at stake.

As I said there isn’t a lot going on in these scenes though the potential existed for a conflict that could have filled an episode. Claire being in the middle of a delusional priest who doesn’t want her to leave because he thinks that she’s good luck and a woman who thinks that Claire is only here to take advantage of the fact that Father Fogden has lost a wife and is very lonely as a result could have been an interesting source of tension in a much darker episode. Especially with the potential for Father Fogden to not allow her to leave thanks to his superstitious beliefs.

Now onto this week’s coincidence. It just so happens that the Artemis suffers damage and stops off at this very island to make repairs. Some exposition is involved to fill us in on what led them to this situation including detailing that the Captain and other members of the crew have been lost. Once Claire hears about the Chinese sailor she runs to the shore and manages to signal Jamie before the Artemis can leave. This feels like one coincidence too many especially after all the effort that went into establishing just how expansive the ocean was. It is addressed that Claire seems to turn up out of nowhere on a frequent basis but making reference to lazy writing doesn’t really forgive it. I’m sure the writers could have come up with a far less trite way of reuniting Claire and Jamie. This may be how these events played out in the books and if that’s the case then this would definitely be something worth changing for the adaptation. 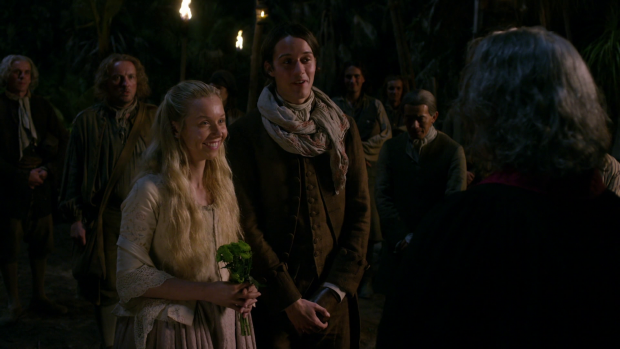 Despite this Claire and Jamie’s reunion is handled well. Sam Heughan and Caitriona Balfe’s chemistry is as strong as ever and there’s the real sense that they have been apart for a considerable amount of time. Jamie mentions that he thought he had lost her once again so is very glad to have her back. I wonder if the writers keep driving them apart because finding each other once again always brings effective emotionally charged moments.

While waiting for the Artemis to be repaired Jamie allows the wedding of Fergus and Marsali thanks to the coincidental proximity of a priest who can perform the ceremony. The wedding itself is very funny with lots of comedic interludes about how eager Marsali is to consummate their union and Father Fogden getting carried away with the minutiae of the ceremony. Jamie officially accepting Fergus into his family by gifting him the surname Fraser is a really sweet moment that clearly resonates with Fergus in a really profound way. Jamie’s relationship with Fergus has always been reminiscent of a father/son bond so this scene formalises that arrangement and marks the point of complete acceptance of Fergus into his family as well as his unconditional blessing of his marriage to Marsali. It’s a touching and understated moment that plays out perfectly.

Prior to the wedding there’s a really good scene between Claire and Marsali where they find some common ground when Marsali opens up to Claire about her fear of becoming pregnant. She sees Claire and Jamie’s relationship as something she wants and doesn’t want a child getting in the way of that right away. It’s a really vulnerable scene played well by Lauren Lyle and ends the rift that exists between her and Claire. Depth is added to Marsali here in such a small scene and her relationship with Fergus feels so much more real as it’s clear that Marsali has things that she wants out of it.

The episode ends on a decidedly comedic note when Claire runs a fever after her injury caused by a violent collision with a branch. Her injury feels like a transparent excuse to let this scene happen which isn’t a bad thing in this case as it takes advantage of the chemistry between Sam Heughan and Caitriona Balfe. A cocktail of Sherry infused Turtle Soup and penicillin cause Claire to become very sexually charged and proposition a very bewildered Jamie who can’t decide whether to just go with it or let Claire recover first. Ultimately he has no choice in the matter and the couple have a very passionate time together as Mr. Willoughby asks what Claire thought of the soup. It’s a light and charming moment to end the episode before what will likely be a very intense final two episodes. 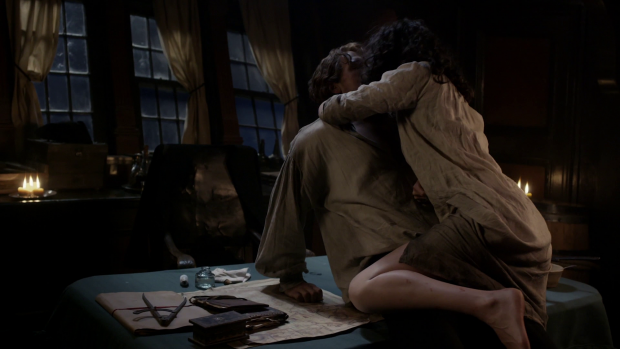 Claire knows what she wants and takes it

An entertaining enough episode that doesn’t quite reach the potential afforded by its various plots. The scenes showing Claire marooned on what appears to be a deserted island are neither long enough to be tense nor short enough to be completely disposable so they occupy an awkward middle ground where some of it was effective. Similarly the scenes of her being in the middle of Mamacita and Father Fogden’s different opinions on what to do with her could have been far more tense and dramatic than they were.

This episode is another victim of coincidence driven plotting when the Artemis stops on the same island to make repairs. Seeing Claire and Jamie reunite is as good as you might expect but it’s all far too convenient. Marsali and Fergus’ wedding was a really humourous and sweet scene especially when Jamie gifted Fergus the name Fraser. The comedic ending where a sexually charged Claire forces herself on Jamie is a fun testament to their relationship and ends the episode on a lighter note before what most likely amounts to a really intense final two episodes.