The Philip K. Dick anthology series Electric Dreams continues this week, offering up its sixth instalment, Human Is.  An adaptation of a short story of the same name, Human Is garnered much of the pre-release hype for the series due to its casting of award-magnet Bryan Cranston in the leading role.  And so with hopes sufficiently raised we delve into another examination of twentieth century life through the lens of Dick’s dystopian science fiction. 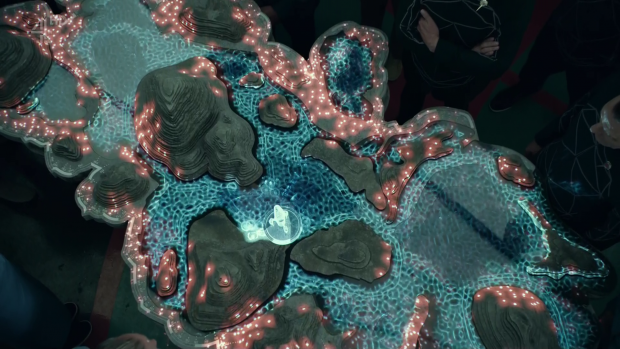 The opening chyron informs the viewer that we are peering some 500 years into the future, the year 2520 to be precise.  Barren rocky terrain, sparsely scattered with dome-like structures, illuminated in a cold blue palette suggests an alien world, however we are actually observing Earth’s future.   Now known as Terra, our world has been plunged into an environmental crisis – resources are scarce; most importantly, oxygen.  Mankind has been reduced to a militarised society focused on the sole purpose of preservation of the species.  Combat strikes are enacted against alien worlds with the aim of plundering the valuable resources required for Terra’s continued existence.  Some members of society question the validity of such an aggressive approach, but are shouted down by the single-minded powers-that-be.  The present-day parallels are clear – imperialistic nations wage wars in asset-rich developing countries aiming to line their own pockets to the detriment of anything or anyone that gets in the way.

Bryan Cranston plays Silas, a trigger-happy Colonel in Terra’s military.  He’s brusque and surly, focused on Terra’s survival through any means necessary.  We witness his neglect of his relationship with wife Vera (Essie Davis) as he dedicates his time and attention to his mission instead of her.  Vera spends her time seeking a surrogate for her husband’s absent affection by frequenting Terra’s seedy underbelly, but appears to be a shell of herself, unable to find pleasure amongst the hedonistic revellers.

When a smash-and-grab assault against the planet Rexor goes badly wrong, only Silas and one other crew member make it back to Terra.  After recovering from his ordeal Silas seems changed.  His interactions with Vera are considered and affectionate; leading the couple to reconnect through passionate lovemaking. 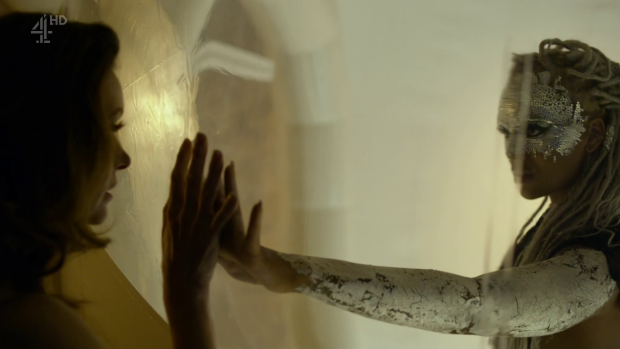 The mirror was not all it was cracked up to be

During the analysis of Silas’ failed mission it is discovered that two Rexorians were aboard the human ship; the aliens’ ability to shapeshift throws the identities of the survivors into doubt.  Silas is arrested and put on trial as a metamorph.  Vera’s complicity in her ‘husband’s’ traitorous intentions is alleged in court and Silas agrees to incriminate himself if the court will exonerate his wife.  Spotting a logical loophole in the prosecution’s argument, Vera saves Silas by stating that a Rexorian would never sacrifice itself for another, thus Silas must be human.  The episode ends unambiguously as Vera asks ‘Silas’ his real name, signalling that she know the being before her is not the man she married, but that she is perhaps happier with this interspecies relationship than she ever was with her terrestrial one.

Forget aliens, forget spaceships, forget Crystal Maze-inspired jumpsuits; relationships are the driving force of Human Is.  It’s redundant to state that good sci-fi deals with familiar issues in a fantastic setting, but there you go.  The trouble with exploring the central relationship hereof this episode is that it’s one of indifference.  Silas neglects his wife, and she seeks solace elsewhere.

Undoubtedly there are talented actors at work here, but unfortunately they are not particularly well served by the material.  Future Earth is a grim place filled with stoic individuals who only really emote when they’re getting excited about the possibility of swindling alien civilisations out of their oxygen.   Pre-incident Silas is dismissive of his wife, and totally detached.  Post-incident he is transformed into a sensitive individual, who appears to appreciate Vera’s concern for him.  He displays care, love and lust, but none of this is a stretch for Cranston, who could handle this in his sleep.  If you want to watch him navigate a difficult and nuanced relationship go and watch Breaking Bad again. 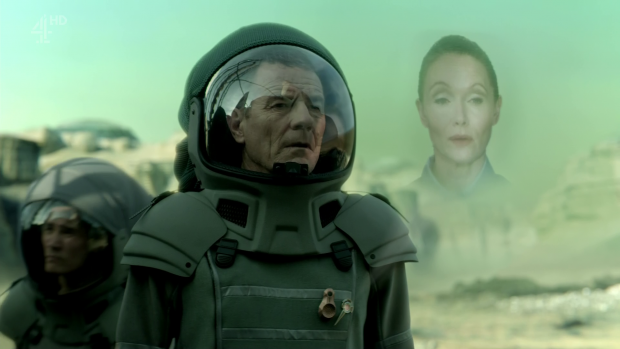 Similarly Essie Davis has little to do as Vera.  Her internalised torment at the hands of Silas is never really explored beyond her trip to the pulsating underground masked fetish party.  Even here, the state of emotional largesse she is experiencing thanks to her loveless marriage overrides the potential for displaying anything approaching range.  She handles the decision to terminate Silas’ mission with consummate professionalism (read no reaction).  Even when Silas is presumed dead, Vera’s life continues without modulation.   She admits that she feels tethered to Silas, but surely his absence deserves more of a reaction?  Perhaps the point is that Vera is so defined by her relationship that she isn’t capable of living life without one.

The conclusion of the episode, the trial and subsequent revelation of Silas’ fate are unsatisfying.  The immediate implication in the aftermath of the trial is that Silas’ identity will remain ambiguous, but this is quickly resolved when Vera reveals that she knows the truth.  The audience is left to ponder why Vera has chosen this path.  Did she and the Rexorian form a bond incredibly quickly?  What happens when the honeymoon period is over?  Is life with a shapeshifting alien really preferable to living in an unsatisfying marriage?  Maybe Terra (read our Earth, that’s right, it’s all an allegory) is actually doomed so all we’re really looking for is someone to sit back and enjoy the fireworks with?

There’s too much to address and develop in an hour’s worth of TV (around 47 mins without ads) and this means that every aspect of the plot is underserved.  Every aspect is dealt with in shorthand.  Frustratingly Human Is does this well in some instances, for example when establishing the setting we understand the future inhabited by resource-needy humans; the split society of Terra with its uniformed elites and murky underworld.  But integral elements such as the central relationship; the events of the battle and Silas’ escape; his changed personality upon his return – these are all too hastily drawn. 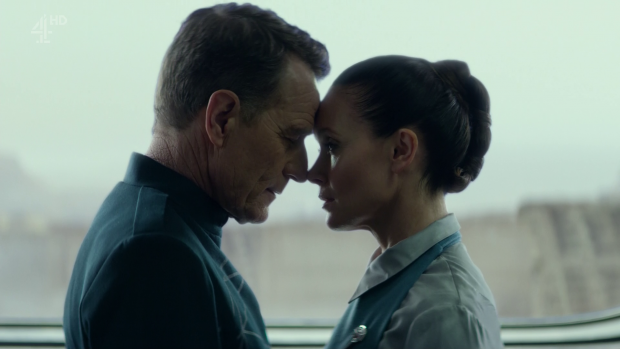 The relationship between Silas and Vera, whilst clearly failing, is never tempestuous enough to grip the viewer.  The point may be that their situation, despite being set during an intergalactic conflict, is as mundane as any stale 20th or 21st century marriage.  The running time of the episode doesn’t allow for any resentment to build, or for the audience to truly appreciate the depths to which a potentially prosperous relationship has sunk.  The conclusion felt unsatisfying and the actors had little to really play with throughout.  This version of Human Is results in a disappointingly pedestrian outing for cult heroes Bryan Cranston and Philip K. Dick that makes you wish you were watching Black Mirror instead.