First of all; I know that I promised that the reviews would be anthologised which doesn’t seem true so far since I also reviewed the previous episode but I promise that the review of the next episode won’t be me. 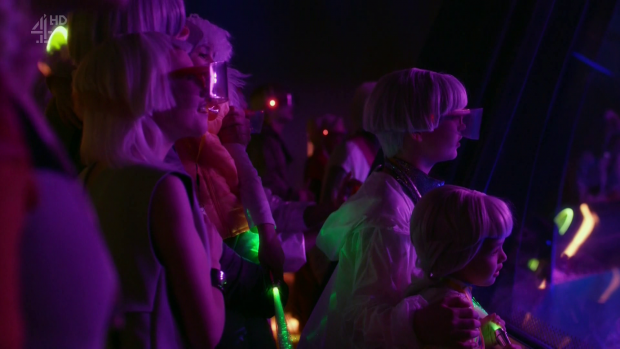 The wonders of space…available for a small fee

This episode takes place in the far flung future on a space ship with the purpose of taking paying customers on a trip through the cosmos to sample the highlights of interstellar space. The catch is that it’s all a con where the company that runs this experience is selling a false reality. It’s mentioned that filters are applied to the images seen by tourists through the windows to make them appear more wondrous when in fact they are completely mundane.

To my mind this is the most interesting aspect of the episode. False advertising is a very common problem in the world we live in so the idea of this being applied to viewing the infinite wonders of the universe is easily relatable. Contrasting the obvious beauty of outer space with the mundanity of package tourism is simple yet effective.

This is further reinforced by Norton’s conversations with his girlfriend Barbara (Georgina Campbell) who belittles him for not being promoted to let them afford a better life. It’s clearly a source of frustration that he is constantly reminded that he hasn’t achieved what he wanted to out of life. As the episode progresses it is made abundantly clear that he is completely unfulfilled with his life and doesn’t agree with selling false realities to people. 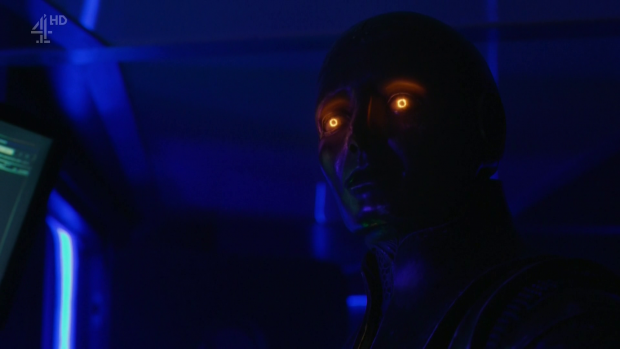 Andrews feels similar but he’s more resigned to a banal existence than Norton is. He’s fairly content to go through the motions and wait until he can afford to retire therefore leaving the life behind. The difference in the two characters is interesting as it delivers varying perspectives on an unfulfilled career.

Things change when an old woman claiming to be hundreds of years old asks to be taken to Earth; a long forgotten world that is essentially a myth to those inhabiting this universe. Irma Gordon (Geraldine Chapman) claims to remember Earth after having left there hundreds of years ago. She wants to go back and relive an idealised memory that she holds onto.

Andrews and Norton gleefully accept her request because she comes bearing a suitcase full of cash which would provide them both enough money to pay their salaries for the next five years. It would take them from a dead end job to living their dreams so naturally they are inclined to give her what she wants. Unfortunately they have no idea where Earth is so decide to lie to her in order to make her dreams come true. They aren’t unfamiliar with the concept of lying to customers so this is outwardly no different so it initially feels like no big deal to trick an old lady into parting with her cash.

Naturally there are complications to this when Norton takes a shine to her through repeated interactions. For reasons that are never explained he begins to remember a life on Earth and finds out that he is the spitting image of Irma’s Grandfather which only deepens the connection. As the story progresses Norton feels progressively more uneasy with the situation as he sees the face of all the customers he has lied to in the past. His sense of common decency gets in the way and his cooperation becomes more reluctant. 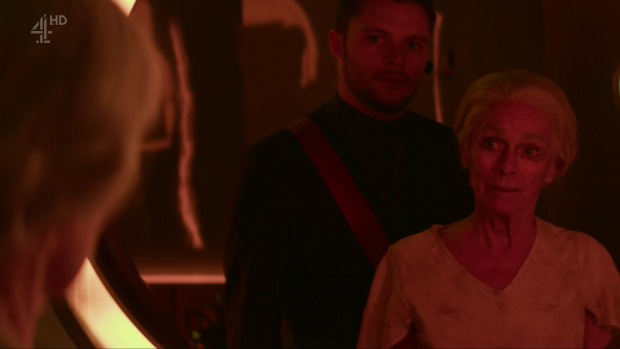 Much of the episode revolves around this unconventional love story. Many of the interactions work really well and I really liked the use of a device that allows the mostly deaf Irma to translate Norton’s speech to text. There’s nothing especially deep or unique about it but it added an extra dimension to their interactions. In some ways seeing what was said written down adds authenticity to it and Irma clearly wants to make an emotional connection. The fact that the end of her life is fast approaching makes any kind of emotional connection all the more impactful as she has so few opportunities left to create one. Norton finds himself drawn to her and it’s implied that there might be reincarnation at play though the flashbacks he keeps having might be fabricated. His imagination may be running away from him because of his obvious desire to be more than he is.

This comes into play at the end of the episode when he risks leaving the ship to explore the barren wasteland surface of a planet that may or may not be Earth. The answer is never provided but it doesn’t matter in the context of the story as the idea of Earth is much more powerful to Irma than the reality ever could be. Once the oxygen runs out in their suits there is an idyllic hallucination where Irma gets to experience the perfect moment that she desired. It’s unclear if there is more going on here but perhaps the open question is the best way to leave it.

A lot seems to be going on in this episode which is both a strength and a weakness. On one hand it’s thematically rich and delivers a compelling commentary on the human need for manufactured experiences. In particular it sends up the tourism industry where package deals are designed to give everyone a blandly calculated sense of wonder. Linking that to the familiar idea of being trapped in a dead end job constantly haunted by the failure to achieve certain life goals is inspired as it delivers a larger theme of life being largely artificial in what we assign importance to. 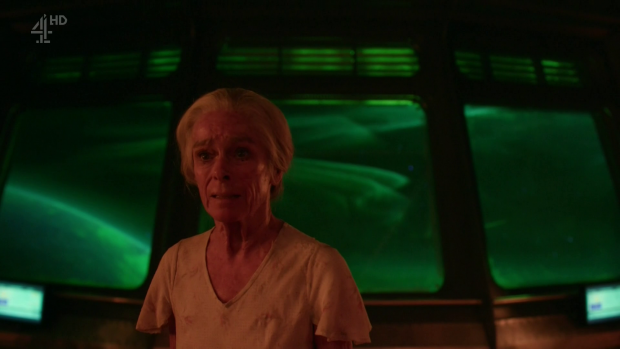 On the other hand the episode doesn’t quite know what drum it’s supposed to bang which makes it feel largely unfocussed. Ideas are established and explored to varying degrees but none of them go the distance towards fully realising the potential. In particular the love story between Norton and Irma is somewhat lacking as it is constantly unclear where it’s leading. The idea that Earth is a myth in this future is also an interesting one but almost nothing is done with it. Mystery and ambiguity are all well and good but the lack of payoff was somewhat frustrating in this instance. If the episode had focused more on a particular area and worked on exploring that in its entirety then the overall experience might have been more satisfying.

Visually the episode is very impressive. The ship interior is limited to a handful of rooms but good use is made of the space to make it a recognisably slightly run down tourist trap that is well used and in serious need of maintenance. Technologically speaking everything is recognisably extrapolated from what is used today. There are really impressive touches such as the faux wood finish on Irma’s robot sidekick RB29 (Mark Ibheis with Christopher Staines providing the voice) adding a touch of character to the overall aesthetic. I also liked the different colours on RB29’s eyes to simulate emotion.

The design of the ship is practical and functional while also being sleek and elegant. There’s something old fashioned about it and it generally stands out as something memorable. Similarly the outer space vistas are beautifully rendered especially when filters are applied in line with story. This was a very good looking episode with a well defined visual aesthetic. 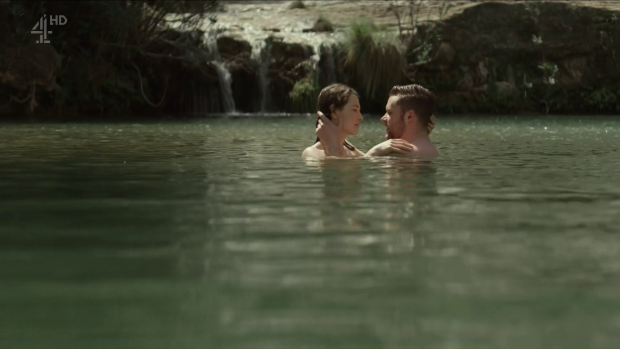 A solid outing that bites off a little more than it can chew. There are many ideas laid out for exploration but few of them are given the required time. I was fascinated by the artificial nature of tourism being paired with being stuck in a dead end job but the love story and surrounding mystery weren’t allowed to breathe as much as they could have.

Visually the episode is stunning with a well defined design aesthetic and great touches such as the design of the ship or the unique look of the robot. It’s a good looking episode and takes every opportunity to dazzle with visuals.