Philip K. Dick’s Electric Dreams adapts the story “Exhibit Piece” into the latest self contained instalment of this anthology series.

This episode can be considered a rarity among this series of Philip K Dick adaptations. Of the three episodes I have so far reviewed this is the only one where I have read the original story so I will make passing reference to it but I’m broadly judging this as a stand-alone piece of science fiction. 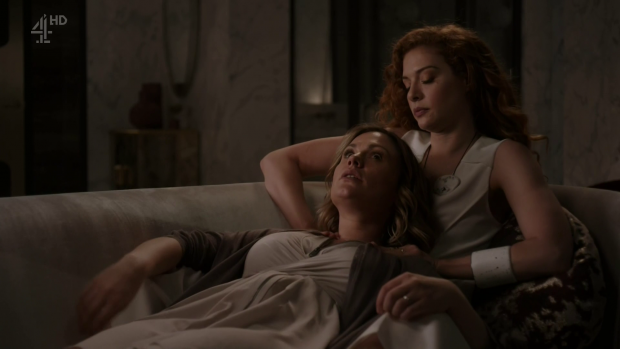 This is great but is there more?

The episode opens with Sarah (Anna Paquin), a future cop living in a sci-fi utopia complete with flying cars. Her life is filled with contentment as she does well in her job, is in a loving relationship with Kate (Rachelle Lefevre) and generally has no troubles to speak of. This isn’t enough for her though as she years for something more. A scene in a diner with her partner Mario (Jacob Vargas) heavily implied that she seeks something more from life though it isn’t defined what this is. Anna Paquin shows this by doing a lot of staring into the middle distance which doesn’t make for the most engaging of performances but it does get the point across.

She is offered an opportunity for excitement when Kate lets her try a device made by her company that lets the user take a break from their life and escape into a fantasy world. Even though Total Recall was based on a different Philip K. Dick story the scenario conjures up comparisons though they largely end there.

Sarah uses the device and wakes up as George Miller (Terrence Howard); a rich tech mogul who moonlights as a vigilante with his friend Chris (Sam Witwer) to avenge the death of his wife. He is haunted by memories of Sarah’s life as well and is starting to doubt what’s real. It turns out that he’s using a similar device to escape his reality which transports him into a future where Sarah is his avatar.

The episode explores each character and the time they live in while constantly asking the question of which is real. It does this very well for the most part though the extreme close-up on the eye to indicate the transition between realities wears thin after a while. Opening the episode on Sarah and her world plays with the audience by framing that as the “real” reality since it is where the episode begins. George’s world is most like ours so it feels more plausible since it’s the most familiar. 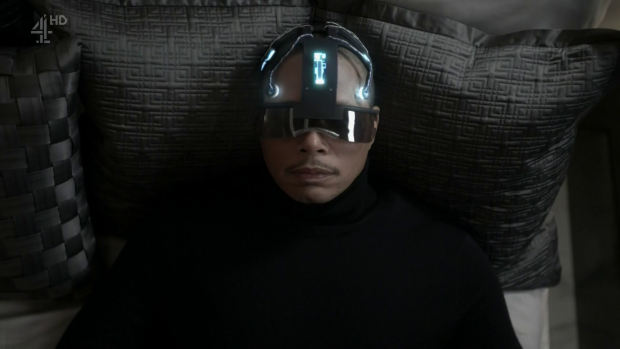 “What is real?” is always an engaging sci-fi story as it encourages the audience to consider their own lives and the nature of existence itself. It’s a big part of why films like The Matrix are so popular; many of these types of stories challenge how much trust we put in our own perceptions. The way we see the world is easily fooled by various forms of illusion, mind altering drugs or any number of factors that cause what we see, hear and feel to become untrustworthy. Stories like this one challenge the idea of knowing reality by asking what would happen if we were torn between two realities that feel real and couldn’t know for certain which one was true reality or even be sure such a thing actually exists. Reality is always fun to play with because it hits audiences on a fundamental existential level.

I like how the episode goes about convincing the audience of the viability of each reality. The connective tissue here is Kate. George’s dead wife looks exactly like her which suggests that one of the realities is false. Sarah is starting to believe that hers isn’t real and lists the things that feel implausible about the utopian society she lives in. Flying cars and a gorgeous lesbian partner who wants to have sex all the time are things Sarah feels are fanciful like what used to be known as science fiction. This is supported by George who is counselled by his Doctor and friend/former lover Paula (Lara Pulver). She is treating him for memory loss though the use of the device and interaction with Sarah’s world is causing it to return.

It’s clever how the reasons for George and Sarah doubting their reality are wildly different but allow them to reach the same conclusion. Sarah doubts hers because it’s too perfect and George doubts his because it’s unbearably imperfect which makes him want to escape. Sarah wants to escape because she feels that she doesn’t deserve such a perfect life. This is something that the episode fails to explore in enough detail which makes the argument so much weaker than it otherwise would be. 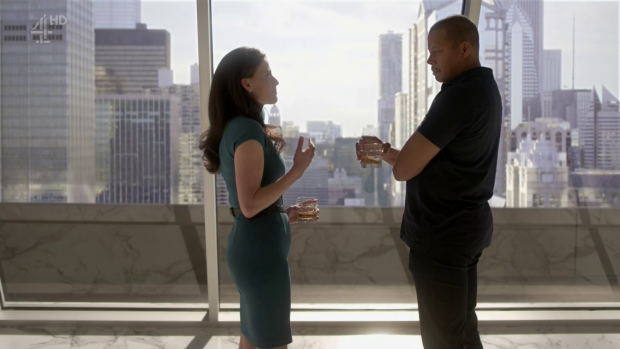 George’s argument is a much stronger one as he has memory issues which suggests that his world didn’t exist before Sarah started perceiving it and the memories of his backstory could be seen as whatever software in Sarah’s device extrapolating the drama that she desires.

Terrence Howard delivers a really strong performance. He is really engaging as a man with very little to live for and constantly seems strung out. His story is most engaging as there is a lot of variety to the scenes that help flesh out his character. We see George the businessman, George the vigilante and George the patient. Each of these facets to his character feel distinct but also feed into a cohesive whole and allow his desire for escape to be clearly defined. He’s a tragic character and I couldn’t help but sympathise with him. It’s easy to see why he would want to escape to a utopian future where he has no problems.

The variety to his character provides variety in his scenes as well. This episode is the most action heavy one we’ve had and it’s really well executed. Sam Witwer is no stranger to filming action scenes and this definitely stands him in good stead here. His character is somewhat ill defined but the lack of depth to the secondary characters only makes the ambiguity stronger. 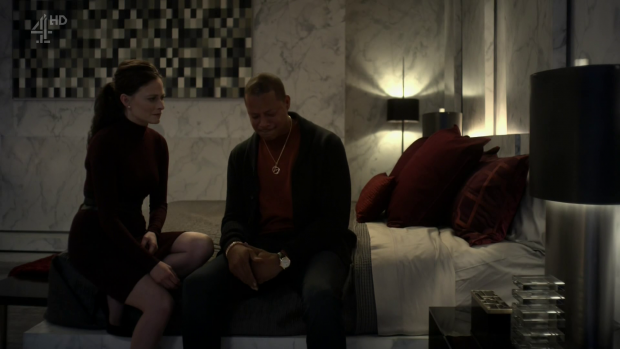 His scenes with Paula are also very engaging as it allows George to be introspective while developing the close personal connection between the two characters. It’s clear that they have a history and it’s clever to have that expanded as George remembers more about his past.

The original story was based on George who was stuck in a job and world where he had limited freedom. He develops an ability to travel back and forth to the 1950s where he finds that freedom. This version still has the overlapping realities though the difference exists with the two completely different characters who can in theory be fleshed out.

As I’ve said, Sarah is the lesser developed of the two though her desire to escape her reality is because she feels that she doesn’t deserve it and is convinced that she should be punished for past sins that aren’t detailed. Guilt is her primary motivation but without knowing why she feels guilty it’s very difficult to be engaged by her which naturally presents a problem in finding the character sympathetic.

I found the ending to be nicely ambiguous though it does lean heavily on the idea that the future world is the real one. It’s a tragic ending as Sarah chooses to escape their reality which leaves her catatonic and doomed to face a lifetime of being unjustifiably punished. George affirms his commitment to his life and decides that he has to live with the pain that comes with loss so it’s a satisfying end to his character arc. The fact that his world appears on a screen behind Sarah suggests that she is now stuck in her fantasy but I still believe that the episode does enough to suggest that George’s world is real as perception definitely can’t be trusted. 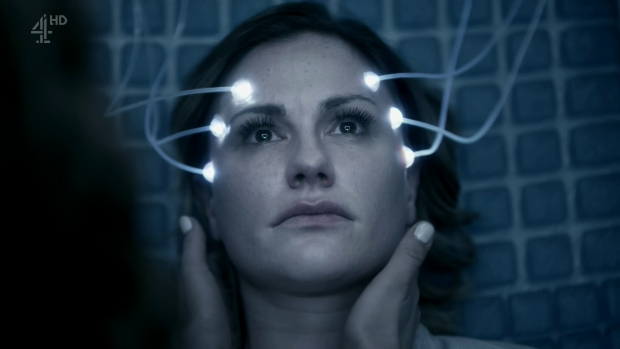 For better or worse, she gets what she wants

A fascinating episode that explores the reliability of perception when it comes to being torn between two distinct realities and having to choose between them. One world is a utopian future and the other is more recognisably similar to our own. Each of them are populated by different characters in the form of Sarah and George who each experience the other reality as the other person. Kate is the connecting tissue She is both Sarah’s lover and George’s dead wife which confirms that one is false. The episode does a great job establishing the viability of each world and offering strong arguments for why each of them could be real. George is the better developed character with stronger motivation where Sarah feels underdeveloped so the exploration is somewhat skewed.

This episode is the most action heavy that we’ve seen thanks to Sam Witwer who shines as a practiced action star despite his underdeveloped character. Undefined supporting characters could be seen as part of the arguments trying to convince the audience which reality is real or not. The ending is bittersweet while being nicely ambiguous though leaning heavily towards one of them being real.