What can we say about Philip K. Dick? He’s one of the most influential science fiction writers of all time. His short stories inspired massive films like Blade Runner, Total Recall and Minority Report as well as other films such as Next and The Adjustment Bureau. There are many others that would take forever to list but sufficed to say he has inspired many film-makers with his ideas. 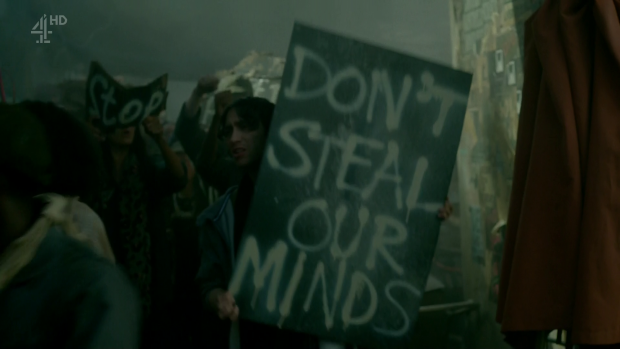 Unrest among the masses

His stories cover a range of ideas but a common theme crops up; that theme can basically be described as “you may be paranoid but that doesn’t mean they aren’t out to get you”. Cynically minded science fiction is fairly commonplace in entertainment media and we arguably live in a very paranoid age so it’s a good time for a collection of Philip K. Dick stories to be adapted for the small screen. Philip K. Dick’s Electric Dreams is an anthology series adapting 10 different stories for television.

The anthology nature of this series presented an opportunity for Kneel Before Blog. The idea we have is to anthologise the reviewing of this series; this site doesn’t quite have 10 writers but there’s certainly enough to share the load. I’m up first with “The Hood Maker”; an adaptation of the Philip K. Dick story of the same name.

This story is set in a future where advanced technology no longer exists for reasons that are undisclosed. Replacing it is a species of telepaths who handle the global communications. When we enter this world society is at a tipping point with an imminent conflict brewing between normal people and “Teeps”-the not so affectionate term for telepaths- escalating due to the appearance of specially made hoods that can block a telepath’s abilities.

Taking us through this world is Agent Ross (Richard Madden) and Honor (Holliday Grainger); a non telepath and a telepath working together to solve a mystery. The A-Story is a pretty standard detective narrative where the characters have to track down the man responsible for creating and distributing the hoods. It’s a competently handled detective story though not especially interesting. Part of the problem is that this is our first and only entry into this world so a large part of the viewer’s attention will be devoted to understanding how it works. 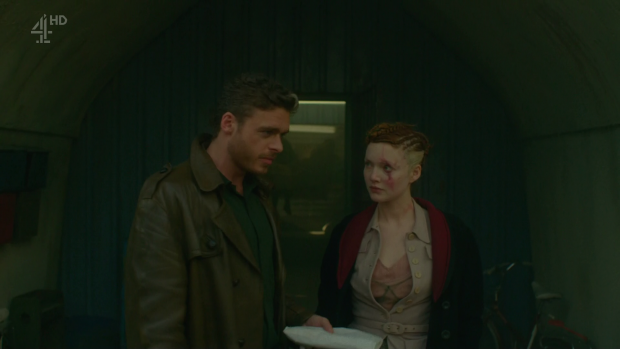 The simplicity of the main story does allow the world it lives in to be developed in greater detail. It’s a world rooted in paranoia and intolerance because of what telepathy represents. The point is made that the only true privacy we enjoy is our own thoughts. Everything else can be read and researched but what people are thinking isn’t accessible to anyone else.

It’s easy to understand why there would be growing unease after the emergence of telepaths. To have someone intrude on your most private thoughts without permission would be nothing short of a violation and knowing that someone could be listening at any moment would definitely breed paranoia. On an individual level that’s bad enough but if this idea is blown up to a societal level then you probably get something very similar to what can be seen here.

There are a number of examples in this particular story with the most effective being Honor reading the thoughts of a man in an interrogation room which gives her access to sexual thoughts he has about his own mother. There would be a great deal of personal shame associated with this and it’s probably not something that anyone would be eager to admit to anyone else so having these thoughts read and revealed to others would definitely be a cause for personal concern. Honor even admits that she had to work harder to counter his resistance to her efforts which adds to the morally questionable nature of this issue.

The emergence of the hoods offers people freedom from intruders into their thoughts. Naturally the hoods become a sought after item and the mysterious Hood Maker aka Dr. Thaddeus Cutter (Richard McCabe) is very keen to distribute them. When he is found he explains that the idea of protecting against telepathy came from those in authority but his belief is that “protection should be democratic” meaning that people should have the right to decide if they want their thoughts being read or not. The counter to that argument is that the hoods represent defiance of the legitimate authority which can breed chaos. 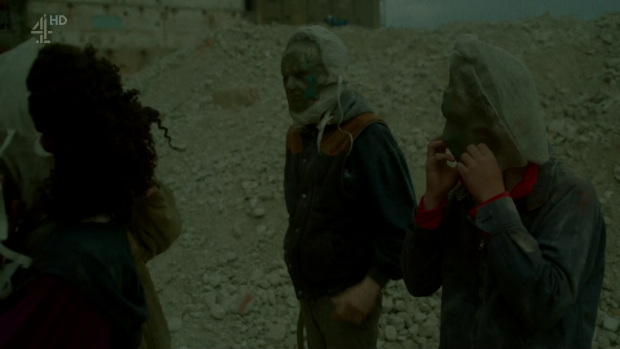 Power to the people

When broken down to its most basic level the hoods can be seen as any form of protest against something the government does. Before they existed there was no mechanism to register dissatisfaction but the existence of the hoods puts power back in the hands of the people and gives them a say in how their society should be run. According to this story that power isn’t something that people can be trusted with which causes the widespread chaos that we see a taste of.

These issues are localised through Agent Ross and Honor. The idea that reading the thoughts of others isn’t necessarily a good thing for those reading the thoughts is addressed. Honor never feels alone because she is always bombarded by the thoughts of others. She has a degree of control over this but the thoughts can still be heard whether she wants to or not. There’s a particularly effective moment where she wears one of the hoods an experiences silence for the first time. Her reaction shows how jarring this is for her and highlights how constant her ability is. She talks about experiencing the thoughts of her mother when she was in the womb and her family resenting her because of her ability. Honor humanises the telepaths and helps the audience to see their perspective. Holliday Grainger’s performance is excellent; she displays a wide range of emotions and projects a sense of innocence that makes the character very likeable.

Richard Madden doesn’t fare quite so well though that might have something to do with the way Agent Ross is written. There is very little to define him beyond the fact that he’s an Agent for the government. He represents the establishment and it’s his responsibility to ensure that the hoods don’t become more widespread. It’s more complex than simply doing his job due to the relationship he develops with Honor. I understand the thinking behind their relationship as it muddles Agent Ross’ perspective on an issue he once thought was so simple. The problem with the execution is that the relationship doesn’t come across as organically as it should so the apparent betrayal at the end of the episode lacks the impact that it really needed.

Agent Ross’ ability to block telepathy also comes out of nowhere and feels largely pointless in the context of the episode. The idea behind it is that he represents the next stage in evolution for humans suggesting that more will follow but for a one shot story it feels unnecessary since it will never be developed.

Visually this story was very impressive. The world as depicted looks appropriately dystopian if a little lacking in scope. Much of it looks very confined and staged which makes it harder to accept that there is a larger world outside what we are seeing. What is depicted on screen does look good and the design work on the characters is interesting. The hoods themselves are unsettlingly dehumanising and very memorable despite their simple design. I really liked the visualisation of the mind reading as well. The chaotic onslaught of visuals before calming to the point they made sense was a really nice touch. With a little more work the world could have been more expansive but other than that the setting is effectively built. 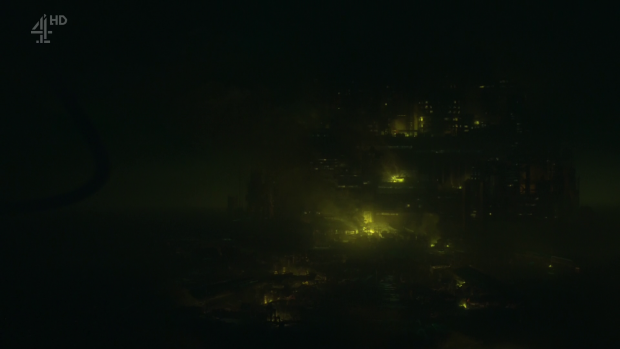 A fascinating start for this anthology series and a complex exploration of our primal desire for privacy. Having our thoughts invaded by those able to read them would be considered a violation and the episode does a good job of exploring this issue from different angles. It’s somewhat weighted towards telepathy being a bad thing for society in general but Honor gives a face to the other side of the argument.

One advantage and disadvantage is that the A-Plot is very simplistic. This allows the world it inhabits to be developed but it also means that the plot is a fairly standard detective story featuring characters the audience doesn’t know. The actors capably bring these characters to life though Agent Ross suffers from being a bit underwritten. Visually the world is interesting to look at but lacks scope so it’s difficult to accept that the issues detailed are global. Despite that the setting is effectively built and the world is well designed.