“Battle at the Binary Stars”

Star Trek: Discovery follows on from an impressive opening episode with an all out engagement between Starfleet and the Klingons.

The crew of the Shenzhou were left in a very difficult position at the end of the previous episode. They are alone against a fleet of Klingon ships and are dealing with a mutiny from Commander Burnham. This episode immediately shows that the production team on this show understand what works about Star Trek. The drama here is informed by the characters rather than the fleet of Klingon ships. It is acknowledged as a problem that has to be dealt with though the biggest issue for our characters is that a trusted member of the crew has betrayed them. 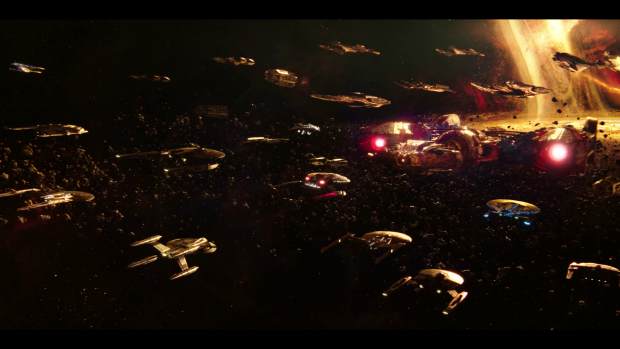 Naturally this is felt most by Captain Georgiou who feels a personal sense of betrayal because of their long service together so the situation is definitely far from ideal as far as she’s concerned. She has no choice but to throw the book at Michael who is relieved of duty and confined to the brig for her actions.

As this is going on Starfleet reinforcements arrive and it becomes a shooting match between the Klingon and Starfleet ships. The space battle is visually impressive though doesn’t entirely avoid the “shields down to x%” trope common to earlier iterations of the franchise and it looks like Starfleet are in no rush to solve their exploding console problem.

Seeing the Shenzhou take a pounding in battle tests the audience connection to the ship after only one episode. I for one was invested enough to feel the loss as it was slowly marched towards its eventual destruction though it is bizarre to have the opening episodes of this new Star Trek show take place on a ship that isn’t to be the main setting of the show and feature characters who largely won’t be seen again. It’s something that hasn’t been done before in the franchise but also somewhat jarring.

It’s clear that the focus of this show will be Michael as the bulk of the drama in this episode revolves around her. Her scenes in the Brig are especially compelling as she works to engineer her escape by confusing the computer with her logic. Essentially the computer is programmed to protect everyone onboard even if they happen to be a prisoner. Since the ship is heavily damaged and the force field won’t protect her for much longer the the computer’s ethical programming means that it has to aid her escape. It’s a clever scene and show’s Michael as a lateral thinker with extensive knowledge of how the technology works. Her skills and experience are very well developed so far and this is great example of how she uses them. 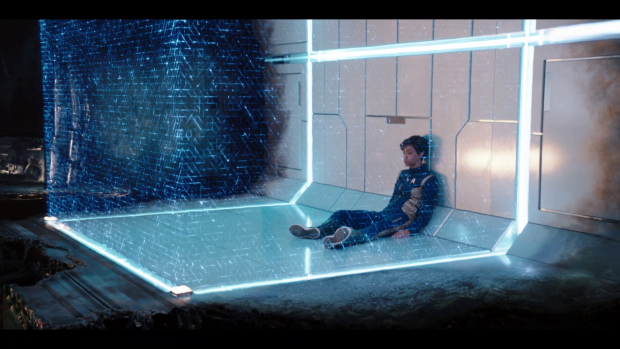 Not the most ideal place to be stuck

Once she returns to the bridge, Michael and the Captain have a discussion about the way they see the situation which reveals so much about each of them. Captain Georgiou is far more idealistic and believes that extending the hand of peace is good enough in most circumstances where Michael believes that sometimes conflict is necessary to create peace. She uses the example of T’Kuvma and relays her belief that killing him would make him a martyr and would only breed more conflict but his capture would create many other opportunities to establish a dialogue with the Klingons. It’s a complex way of looking at conflict and delivers a view on how it can create positive outcomes.

Michael’s Vulcan upbringing is very important to her character as her views are arrived at through a combination of logic and emotion. She considers the facts but also trusts her instincts which delivers a uniquely interesting outlook that should be interesting to see explored. Her decision to betray her Captain was out of desire to save the ship and it was her instincts that told her it was the right decision to make.

Michael and the Captain beaming over to T’Kuvma’s ship to plant a Warhead felt somewhat tacked on and merely serves as an excuse for Captain Georgiou to be killed. It’s not terribly exciting to watch as the bulky Klingon suits make the action feel somewhat clumsy but the loss of the Captain is felt which is a testament to Michelle Yeoh’s ability to make such a short run character engaging. The writing is sharp enough to establish a natural bond with Michael very quickly so her death is impactful.

There are consequences to Michael’s decisions as she is stripped of rank and sent to prison at the end of the episode which does present a problem if she is to be the main character of the series. I suspect there will be some reason for her to be pardoned and returned to duty but hopefully the consequences won’t be wiped clean. A certain degree of serialisation has been promised for this show and Michael seeking redemption for bad decisions definitely creates an interesting arc for her to follow. 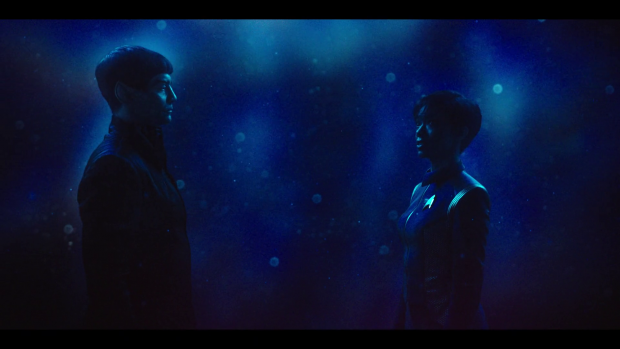 Other than name recognition I still see no reason for Sarek to be included over a newly created Vulcan character of considerable influence. I also found the interstellar mind meld communication to be on the ridiculous side. There may be previous for this in Star Trek: Enterprise but I don’t think it really works other than forcing an interaction between Sarek and Michael that fails to be meaningful.

This episode wraps up the immediate Klingon story with the defeat of T’Kuvma and the suggestion that there will be others to take up his mantle. Michael said that killing him would make him a martyr and that seems to be exactly what is happening here. Even though the plot is resolved the potential exists to take it in different directions in subsequent episodes.

Unfortunately T’Kuvma isn’t developed as well as he could or should be. His plan to essentially become the Klingon messiah is an interesting one and it would be fascinating to explore how the other Houses of the Empire see him over  a longer time. His commitment to the cause is definitely admirable though he doesn’t have enough screen time to really come across as a fleshed out antagonist so feels a little incidental to the overall plot.

I made the assumption in my review of the previous episode that there was something mysterious going on in regards to the Klingons but it seems that the opposite is true. It is made abundantly clear that T’Kuvma plans to unite all the Klingon houses while pushing his people further into isolation. Starfleet and the Federation occupy the opposite position as their core principles are about peaceful coexistence with other species. It’s a fairly obvious commentary on current world issues where there is an increasing desire for cultural isolation. Star Trek at its best explores relatable issues through a science fiction lens so this approach is nothing new but it’s incredibly relevant.

The message Star Trek: Discovery delivers is that isolation is a bad thing and a cohesive whole is definitely greater than the sum of its parts. It is left open for viewers to decide which approach is the right one but the founding principles of the Federation are around cooperation and finding a peaceful solution so the show will continue to explore this philosophy. It’s possible that the Klingon approach will be explored to a greater degree as well but time will tell. 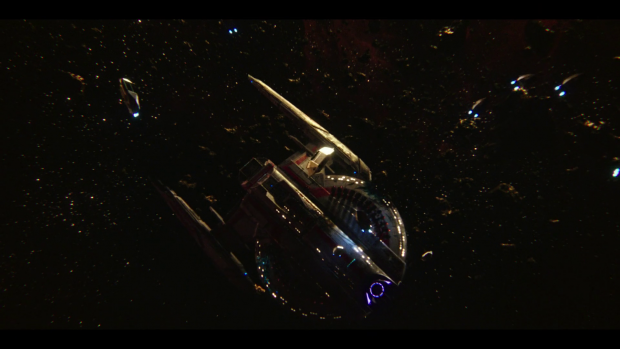 Goodbye Shenzhou; we hardly knew you

A satisfying conclusion to the opening story that delivers great looking space battle sequences and even better character moments. Keeping the drama focused on Michael and Captain Georgiou’s conflicting ideals was a smart decision and it allows both characters to shine through their different outlooks. The death of Captain Georgiou was definitely impactful as so much had been established about the character in a short time

The Klingon plan being that of enforced isolation was a fascinating one as it puts the ideology of the Klingon Empire against that of the Federation with the pro-cooperation opinion being the dominant one held by the show at large. There are moderate issues in this episode such as the tacked on away mission that fails to be engaging and the confusing scene between Sarek and Michael that felt very contrived. It’s an interesting relationship in theory though I’m still unsure why Sarek couldn’t be replaced by a newly created Vulcan character.