Star Trek: Discovery returns from Winter Hiatus to deal with the cliffhanger posed in the previous episode and line up the arc for the next few episodes.

Before beginning it’s worth noting that this episode feels more special because it’s directed by Jonathan Frakes, the man who brought us Commander William T. Riker and director of two Star Trek films. 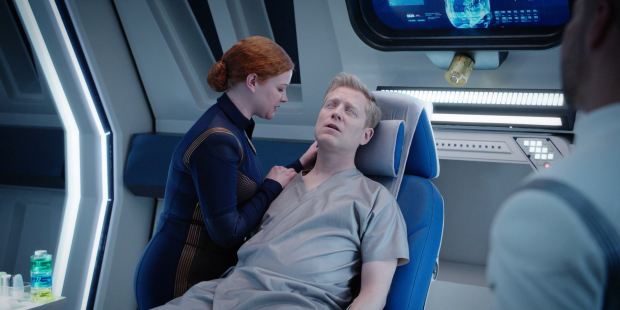 Stamets has had better days

It doesn’t take long for the question of “where?” to be answered in this episode which means that much of the running time is spent exploring that answer and figuring out the next move. It was teased in the last episode that parallel universes exist which heavily hinted that the Discovery had accidentally jumped to an alternate universe of some sort. It turns out that they have wound up in THE Mirror Universe as in the one introduced in the iconic Original Series episode “Mirror, Mirror“. Most of the episodes featuring either that universe or characters from it are a lot of fun so this episode immediately has big shoes to fill by comparison.

There is always a novelty value to alternate universe episodes as it allows the actors to have fun with their roles and the writers to play around with darker versions of the established characters. Of course it could ultimately be a meaningless diversion but it can justify itself by the fun factor.

Based on this episode it appears that the remainder of the season will be set in the mirror universe. I find this interesting because it’s putting characters who aren’t often focused on in the limelight to some extent. The greatest example so far is Tilly who gets a taste of the Captain’s chair even if she is only pretending. It’s such a departure from what we expect from Tilly and great to see Mary Wiseman step outside of her normal characteristics to play a cartoonishly sadistic version of herself. We have no idea what Captain Tilly -or Captain Killy- is like but based on the information we’re given but considering the Terran Empire are described as being racist, xenophobic and brutal then it’s not too difficult to guess. Tilly is doing her best approximation of what that might be like though it’s possible that the mannerisms are nothing like her counterpart and that this might cause problems at some point. 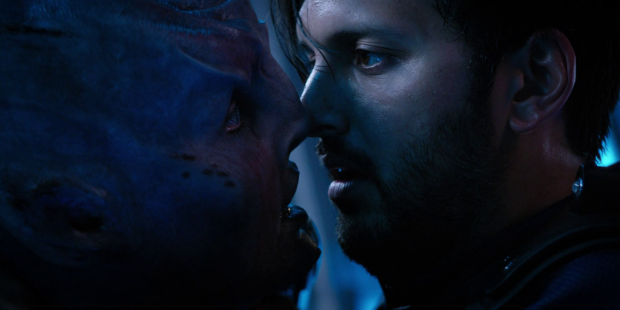 Tyler faces the truth about himself

For the purposes of this episode it allows Tilly to face up to a potential that lies within her that makes her uncomfortable. She mentions that knowing about the existence of a perverted version of everything she aspires to be is unsettling to her and Burnham gives her practical advice about how to deal with it. The advice is very sentimental and it’s about being true to herself when facing this darkness while drawing on the strength of an entire crew committed to support her. Burnham has learned that part of being a Captain is trusting the crew and letting them back you up. Trial under proverbial fire is definitely a good catalyst for character growth and this opportunity is definitely taken with Tilly. I look forward to seeing how the character continues to develop after this episode.

My eye is firmly on Lorca as I continue to not trust anything he does or says. The character is great because of the layers that Jason Isaacs gives to him in his performance and his acting lends itself to the overall mystery of this scenario. We know from the previous episode that he did something to perhaps sabotage the jump and there’s a familiarity to his facial expressions when others are discussing the Terran Empire about him. It’s possible that I’m reading too much into this because I’m suspicious of him but it feels like he’s pretending to be surprised and it always seems like he has a lot more information than he really should despite the existence of a rebel data recorder.

The fact that Lorca is missing, presumed dead and on the run from the Terran Empire suggests to me that he found out how to switch places with his duplicate from “our” universe and has been posing as him ever since. Narratively the character is kept at arms length with nobody on the crew suspicious enough to ask those questions though I suspect that his counterpart will turn up alive and answer this one way or another. 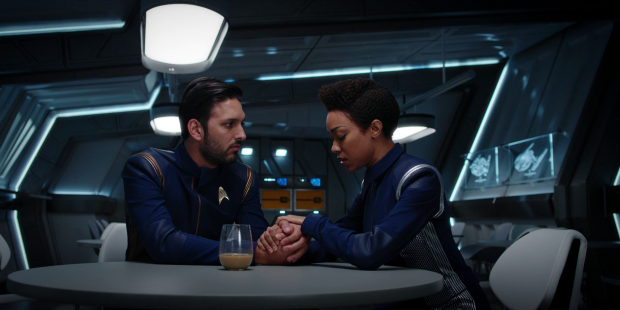 Burnham is forced to face her own potential when learning that her counterpart is captain of the Shenzhou and her crew consists of many of the same faces she served with back when she was first officer. Of course they aren’t the same people but looking into the eyes of the exact duplicate of someone whose death you feel responsible for can’t be easy. Rationally she knows that the universe is different but everything is just similar enough to be eerie.

In “our” universe Burnham betrayed her Captain and resigned herself to living out her days in prison before becoming part of the crew of Discovery but in the Mirror Universe she got the command she wanted and commands the ship she called home for many years. It’s clearly difficult for her to retain objectivity in this scenario but she has no choice as she’s instrumental to figuring out their next move.

Her scenes on the Shenzhou are great as she plays a very short game of cat and mouse with her counterparts first officer Connor (Sam Vartholomeus) who wants to solidify his authority and gain the respect of the crew by killing her. Burnham is put in the immensely difficult position of having to kill someone who looks identical to someone she worked closely with. It does keep the crew loyal and fearful of her but there’s an implication that she will have to keep compromising her morality to maintain her cover. It’s very interesting dramatically and allows the somewhat campy evil universe to feel like a legitimate threat. 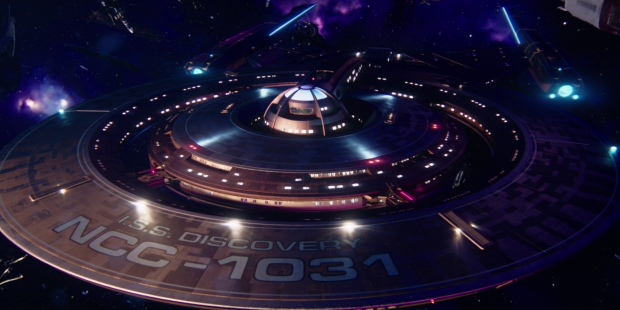 It appears that the prevailing theory about Tyler is at least partially correct. This episode strongly suggests that he is a surgically altered Klingon programmed to believe that he’s Human. L’Rell tries to awaken him but something goes wrong and Tyler is never the same afterwards. There is a sense that he’s trying to hold onto his humanity when he looks for answers but he’s clearly unravelling as shown through his scenes with Burnham where he asks her to trust him until they can return to their own universe. She does but she could be emotionally compromised by her feelings for him as well as the situation overall. This continues in their scene towards the end of the episode when he vows to protect her and she returns the sentiment.

Both of these scenes develop the Tyler/Burnham relationship in compelling ways thanks in large part to excellent performances from Shazad Latif and Sonequa Martian Green as well as strong writing showing Tyler essentially treating Burnham as a crutch tying him to his humanity. 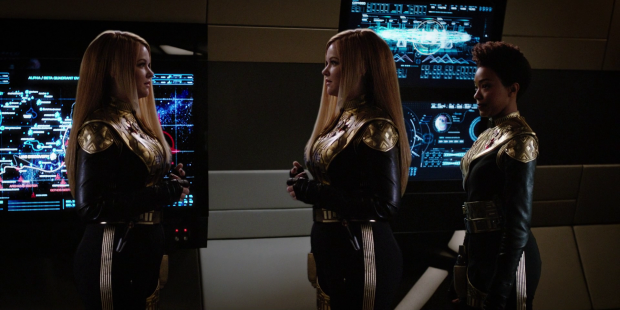 This brings me to the biggest problem this episode has. It tends to burn through plot very quickly to the point that it feels like too much happens and things move far too quickly. Setting up that Tyler is a Klingon spy of some sort and having Dr. Culber run tests on him is enough for right now without delivering further answers. The casual and surprising death of Culber at the hands of Tyler. The death being a surprise sadly doesn’t make it good because it doesn’t feel earned dramatically and runs the risk of making Tyler irredeemable. It comes across as something that happens and isn’t really dealt with. Of course there’s plenty of time to deal with it over the rest of the season but Culber was a character who has so much more to give to the show and is part of an important relationship being Stamets partner. There’s something somewhat dodgy about injecting tragedy into the first same sex relationship in Star Trek history especially given how interesting this relationship was.

I found the way the connection between Stamets and Culber was handled in this episode to be excellent as well. Lorca ordering Culber to stop handling Stamets care because of how close they are and the problems that would cause for remaining objective and professional. From an emotional point of view Culber wants to care for the man he loves but it’s equally difficult to see him almost catatonic. He also clearly blames Lorca for this so there was a lot here that the show now can’t take advantage of. Stamets talking about a palace is mildly interesting if overly cryptic.

Another way the plot moves too quickly is by rushing to the Shenzhou portion of the story rather than taking the time to have the characters consider their situation. It was great to see the information slowly come out and the montage of the crew preparing themselves to pose as the I.S.S. Discovery was visually impressive but it should have been at the end of the episode rather than around 2/3 of the way through. This episode should have been about the fear and the mystery rather than moving the plot forward as quickly as they did. 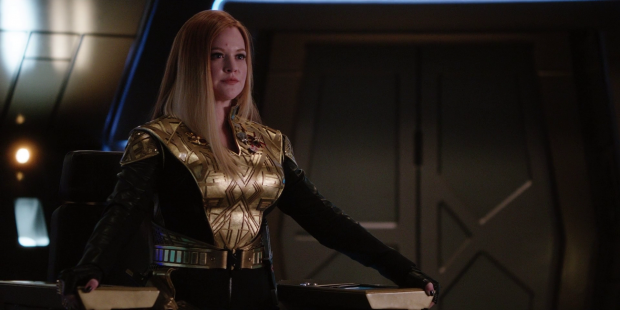 Tilly buries herself in the part

An excellent episode with very strong character work across the board. The reveal that Discovery has stumbled into THE Mirror Universe is handled well and the crew coming to terms with the reality of the situation is nicely handled. In particular this allows Tilly to have some much needed development as she is faced with a dark mirror of everything she aspires to be. Mary Wiseman playing against type is great to see and I look forward to seeing how Tilly develops. Burnham being faced with an example of her own potential works really well too and the moral lines she has to cross in order to maintain her cover feel very visceral. Tyler is shown to be a Klingon spy and starts to unravel which is definitely compelling but also moves too quickly.

The death of Culber is definitely a shock but not in a good way. Removing a really interesting relationship in such a random way is not a good choice and it ruins the potential given by Lorca ordering Culber to surrender Stamets’ care. It also makes Tyler somewhat irredeemable since he is the one who killed him.