Star Wars Rebels returns to Lothal so that the team can infiltrate an Imperial factory to steal plans for a new weapon.

On the surface this plot feels like standard Star Wars stuff. There’s a Star Wars film coming out in a couple of weeks that has this exact premise but this episode proves that there are different ways to play with a fairly obvious concept. 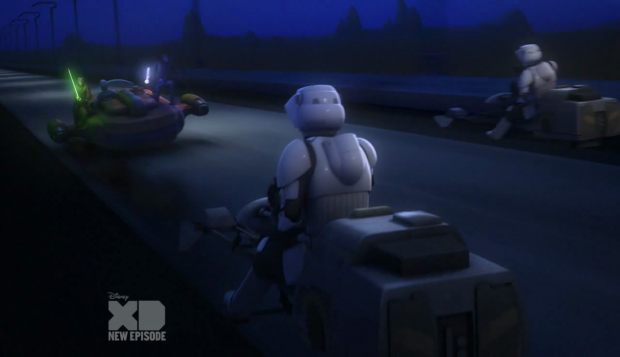 I’ve been fairly underwhelmed by the last few episodes of this show so my expectations for this one were suitably low. I watch this and enjoy it for the most part but the weak episodes really drag the whole thing down. The biggest problem this show has is carrying a story through the entire season. It’s structured in such a way that it appears to have plans on where characters will go and how events will play out but as the episodes progress it’s pretty clear that there is no plan that is being followed. There are a number of unconnected episodes then an event story that furthers something teased in an earlier episode.

This episode develops something that has been previously established in a big way. The twist that Kallus is actually Fulcrum came as a complete surprise to me because it didn’t seem like that’s where the character was heading. His time spent with Zeb in “The Honourable Ones” hinted that he was starting to question his allegiance to the Empire and letting Sabine go in “The Antilles Extraction” seemed to be repaying the debt that he feels was owed to Zeb for saving his life. There has been nothing to suggest that Kallus world view had changed that much so it’s a really effective twist when it turns out that he’s helping the Rebels. It’s a twist that makes sense based on what we know about the character as well so the reveal doesn’t come from nowhere.

Kallus being a Rebel informant creates a lot of interesting possibilities for him. There’s plenty of scope for the Rebels to be reluctant to trust him given their past experiences with him. It’s conceivable that he could eventually feed them incorrect information that could lead them into a trap. I hope that isn’t the route the writers decide to go down because Kallus is far more interesting as a Rebel mole within the Empire who is constantly at risk of discovery.

His position is already a tenuous one as Thrawn is already suspicious of a traitor in his midst. Given how intelligent he seems to be it is only a matter of time before Kallus is discovered. He has never been the smartest of villains so that must surely translate to his status as an ally as well. 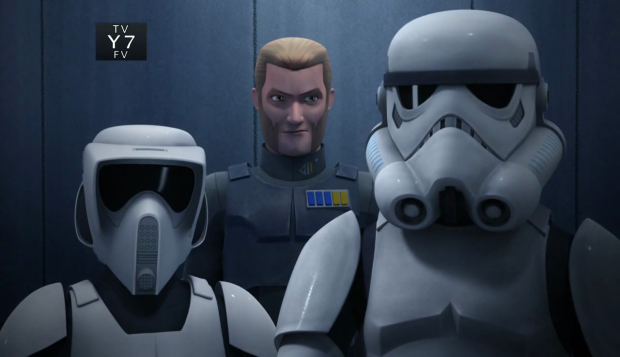 Thrawn has been less than impressive so far. There have been interesting things about him such as his respect for his opponents and the way he looks at problems differently but he hasn’t actually done anything yet. Most of his scenes involve him being calm and intimidating but we haven’t seen him in action. I don’t expect him to be involved in battles directly as he seems like more of a strategist but it’s about time we see some practical application of his skills.

He did have some really cold moments in this episode such as condemning a man to death to prove that the Speeder Bike had been tampered with. It shows that he has no tolerance for people being disloyal and doesn’t really value the lives of those he considers to be his enemies. Seeing this on a larger scale would definitely be terrifying but the way he punishes the farmer for the sabotage is brutal and uncompromising. Dissuading sabotage by having people personally test the bikes they worked on is a very smart idea as well. There’s a lot of potential in a villain who is that cold but so far Thrawn is being badly underused on the whole. In this episode he was exactly what he needed to be so hopefully there will be more opportunity to explore that.

The punished farmer also adds some personal stakes for Ezra who encountered him way back in “Fighter Flight“. This character isn’t deep or well developed by any stretch of the imagination but the fact Ezra has a personal connection to him is enough to show how this impacts him. The man killed so that Thrawn could set an example represents Ezra’s connection to his home and how the Empire are destroying that. It’s a very simple connection but also gets the point across very well.

One disappointment is that beyond Ezra’s connection to his home planet there is nothing else to distinguish any character development for any of the main characters. Ezra and Kanan are involved but it could just have easily been anyone for all we learn about them. Zeb would have found it a bit harder to sneak around but Sabine and Hera could have been involved and there would have been very little difference to how this played out. Use of characters is another problem this show has as very little about their missions feel connected to the characters actually on them. I’m not saying that everything should have personal stakes for the characters but finding unique ways to use their skills would make their involvement fit better. 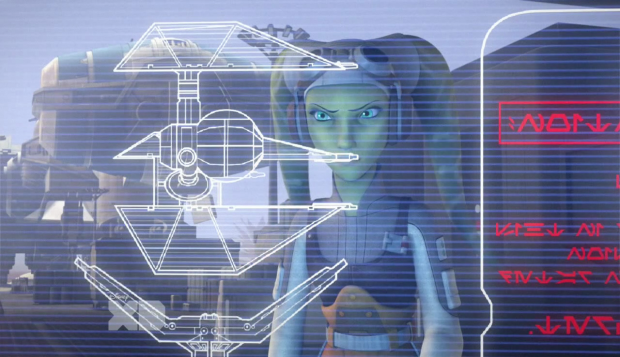 That’s not the Death Star!

The nature of this story meant that Ezra and Kanan couldn’t really share any scenes with Thrawn which downplays his villainous nature a bit. To be more of a personal threat to the core characters he will have to interact with them more otherwise he’s a distant antagonist who doesn’t directly affect them. Maybe the second half of the season will dial up the connection between Thrawn and the Ghost crew.

I found the scene where Ezra and Kanan were in the line-up as Thrawn paced up and down to be really tense despite the really loud whispering that would have been audible to any one with average hearing. Knowing that he could easily rumble them at any second made the scene feel very claustrophobic and Thrawn’s voice makes his very presence an intimidating one.

This episode also excels in the action sequences. The presence of Clancy Brown’s Ryder Azadi always adds lot of creative action to the mix and the Speeder chase at the start of the episode definitely qualifies. Forcing the pursuing bikes to overheat was a clever move and set things up nicely for the rest of the episode. The sequence involving the Imperial Walkers was really well done too. Using one walker as a shield to hide from the blaster fire of the other was a clever move and seeing one walker sit on another was a stroke of genius. 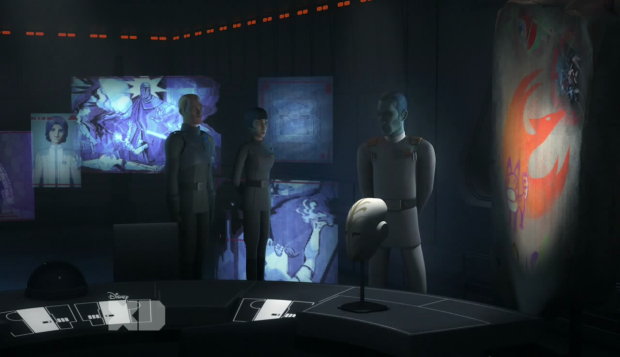 A very good episode with lots of tension, a clever twist and creative action sequences. Kallus being a Rebel informant has a lot of potential and came as a complete surprise since Kallus has been enough in the background to keep the viewer from guessing that he had defected. The fact that he isn’t trusted at this point adds extra layers to this too. There’s a lot of tension as Thrawn knows there’s a traitor in his midst and that it will only be a matter of time before Kallus is discovered. Thrawn still needs a lot of work before becoming a legitimate threat but he is well used in this episode.

One issue this episode has that this show tends to have in general The action sequences are really creative as well with an engaging chase and the unique use of Imperial Walkers. This definitely numbers as one of the more memorable episodes of this show.